"There's always something to look at if you open your eyes."

The Tardis lands on the planet Deva Loka, with Nyssa being left in the ship attached to a delta wave augmenter to help her sleep. An humanoid expedition from another world is also on the planet which has been reduced to 3 people: the expedition scientist Todd, the mentally unstable security chief Hindle and their older leader Sanders. The Doctor, Tegan & Adric encounter a set of wind chimes in the forest, but Tegan, overcome by the effect gets left behind. The Doctor & Adric find one of the expedition's empty Total Survival Suits which Adric accidentally activates causing it to take them back to the base. Tegan finds her mind in a dark environment where an odd couple, with snake tattoos on their arms, are playing chess and she finds herself pestered by a strange figure. Hindle is suspicious of the Doctor & Adric, but the other except them. However when Sanders takes the TSS out to explore Hindle seizes the moment and holds the visitors at gun point. 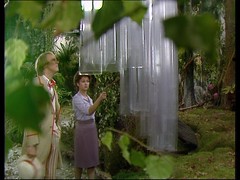 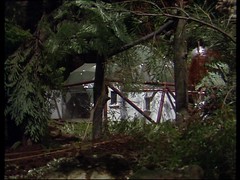 Kinda: I haven't a hope of explaining this one properly to you. There's more going on here than meets the eye, which thus far is essentially a standard colonisation tale with some commentary on British Colonialism & attitudes thrown in. On the surface in many ways the situation harks back to Third Doctor Jon Pertwee tales like Colony in Space and The Mutants.

Of the team we meet, Sanders represents this most of all, very obviously a stereotypical English gentleman of a certain age and era. He also seems to have a penchant for practical jokes, as he demonstrates with Hindle at the start of the episode. 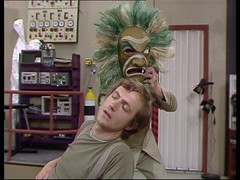 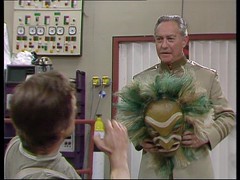 Hindle.... Hindle's obviously on edge and close to breaking. He's lost three members of the team - Roberts, whose TSS the Doctor and Adric find, and two unnamed others. He's probably been the victim of however many months of Sanders' practical jokes which, if they're anything like this one, won't have been helping. It would be interesting to know if he was like this before the expedition started.

TODD: You push him too hard.
SANDERS: Nonsense.
TODD: He'll crack.
SANDERS: Think so?
TODD: If you want my opinion
SANDERS: No, thank you. Too many opinions as it is. Meet a few difficulties and suddenly everybody's got an opinion. That's how things fall apart. He's a washout.
TODD: Is that your opinion?
SANDERS: Yes, it is. The difference is, I'm in charge.
SANDERS: I'll tell you something. I welcome these difficulties. It was all too easy around here. I was starting to feel at home. First time ever, anywhere, in forty years. And that, when you're a couple of dozen parsecs off home world, can be a dangerous feeling to have. I think so, don't you?
TODD: Which still leaves us with the question, where is Roberts?
SANDERS: It does.
TODD: And the others.
SANDERS: I know, yes.
TODD: There are now only three of us left.
SANDERS: I can count!
TODD: Well? 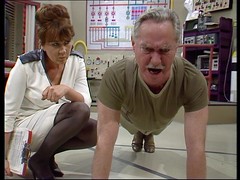 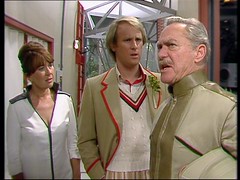 It's obvious to all that Sanders' decision to leave Hindle in charge when he goes out isn't a good one....

SANDERS: Have you got a better idea?
TODD: I was just pointing out that if you
SANDERS: Well, don't. I'm not Roberts. Oh yes, incidentally, while I'm away, Mister Hindle will be in charge.
DOCTOR: I don't think that's
SANDERS: Yes? What?
DOCTOR: Nothing.

TODD: I really think you should think twice about leaving Hindle in command.
SANDERS: I never think twice about anything. Wastes too much time.
DOCTOR: He's not altogether stable. In fact I think he's on the verge of a nervous breakdown.
SANDERS: Well then, being in charge should do him some good, what? Might even make a man of him.

There does seem to be an obvious mistake they've made:

SANDERS: You know something? This is my fourteenth ex and rec, and I've never seen a planet like this one. Look at it. Paradise, isn't it? The sun shines, the birds sing, food grows on trees. Even the ILF is friendly. Or used to be.
DOCTOR: The ILF?
TODD: Intelligent Life Form.
SANDERS: The primitives.
DOCTOR: The Kinda.
TODD: Yes.
SANDERS: Oh, you're not eating.
DOCTOR: Ah, no, no. I don't seem to be very, er. These difficulties you referred to?
SANDERS: Well, go on, tell him. Why not?
TODD: Originally there were six of us.
DOCTOR: Roberts?
TODD: And two more before him. They disappeared. Simply haven't returned to the dome.
DOCTOR: What, do you think the Kinda took them?
TODD: Impossible.
DOCTOR: Are the Kinda dangerous?
SANDERS: We don't know. You see, with the Kinda, they seem innocent enough, and they smile a lot, or they used to.
DOCTOR: Used to?
SANDERS: Until we took the hostages.
DOCTOR: The hostages?
SANDERS: Only a couple. Standard procedure. It's in the manual.
DOCTOR: Could I see them?
SANDERS: Why would you want to do that?
DOCTOR: I've a friend still in the forest. I'm quite concerned for her safety. I'd like to know how much of a threat the Kinda are.
HINDLE: Sir, I must protest!
SANDERS: Yes, of course. Why not. Todd'll show you. They're not very interesting though.

I would imagine the "Standard Procedures" reason that "Right, we've got some of your lot in here, now play ball and co-operate" which is a massively flawed way of thinking anyway.

TODD: Sanders doesn't think they're ill. He thinks they're sulking.
DOCTOR: Hmm. Complete lack of neuromuscular reaction. They're not sulking. Shock, wouldn't you think, in the circumstances? Your arrival here must have come as something of a surprise, and then to lock them up.
TODD: I argued against it. It's totally illogical.
DOCTOR: Oh, illogical. Please let me out of here. Have you any idea of the affect upon a primitive mind
TODD: Primitive? Is that what you think? I'm not so sure. Does that design remind you of anything?
DOCTOR: Well, it could be the double helix.
TODD: It is. The heart of the chromosome. They all wear them.
DOCTOR: Thank you. What could they know of molecular biology?

TODD: There are no predatory animals on Deva Loka. No diseases, no adverse environmental factors. The climate is constant within a five degree range and the trees fruit in sequence all the year round.
DOCTOR: Which means the Kinda have no need of shelter and no fears for food supply.
TODD: Right. And there's something else.
DOCTOR: What?
TODD: I think the Kinda are telepathic. 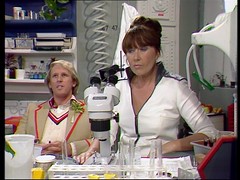 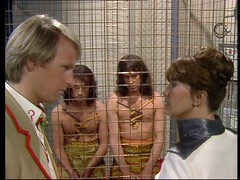 TODD: They can't speak. They have no language and yet they can communicate. Take no notice of me, Doctor. It's only a guess, and guesses are not science. Have an apple.
DOCTOR: I thought the native produce was forbidden.
TODD: I'm a scientist. I do not feel bound by Hindle's stupid precautions. Beautiful, isn't it?
DOCTOR: Yes.
TODD: You heard Sanders.
DOCTOR: What?
TODD: Paradise, he called it. Perhaps he said more than he knew.

DOCTOR: There's a Kinda out there now.
TODD: Yes. Strange, he's often there. The others keep well away.
DOCTOR: He doesn't look as if he's living in paradise.
TODD: No, he doesn't, does he.
DOCTOR: What are your plans for this planet?
TODD: If I told you that, Hindle would have a fit.
DOCTOR: Oh, well, of course, if Hindle would have a fit.
TODD: The mother ship returns in six seasons. If we've survived, we will submit a report which will be assessed with a view to colonisation. Our mother world is very overcrowded.

Todd is the voice of sense and sanity throughout, the only one of the remaining humans thinking clearly.

So we have Telepathic natives, in shock, and we let them come into contact with the obviously mentally unstable Hindle? This won't end well. 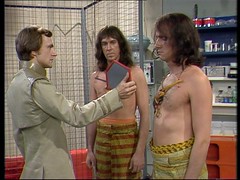 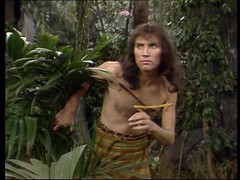 The Kinda outside the dome will become significant as the story progresses.

Nyssa collapse at the end of the last episode is used to write her out of proceedings here:

ADRIC: She's hopeless in her present state of mind.
NYSSA: Don't exaggerate. I only fainted.
ADRIC: Twice.
TEGAN: Where's the Doctor?
ADRIC: In the Tardis, rigging up a delta wave augmenter for Nyssa.
NYSSA: I'm all right, really.
ADRIC: You see?
NYSSA: I can't seem to concentrate, that's all.
TEGAN: Doctor! 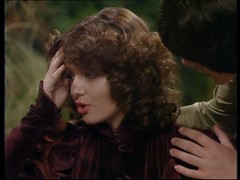 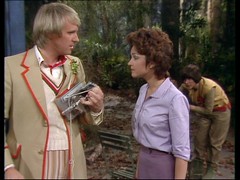 DOCTOR: Hmm. Nearly there.
TEGAN: What's wrong with her?
DOCTOR: Oh, just mild mental disorientation. Nothing that forty eight hours of induced D-sleep won't cure.
TEGAN: Is that the delta wave augmenter?
DOCTOR: Yes, of course. There's no need to shout. Come along, Nyssa.
ADRIC: That's the sonic screwdriver.
DOCTOR: Well done, Adric. It's functioning as a delta waveform generator.
ADRIC: What if we need it?
DOCTOR: Why should we need it?
TEGAN: I suppose we're stuck here now while she sleeps.
ADRIC: It's beautiful.

If you're looking for an explanation why this has happened, I suppose you could blame what Monarch and his Androids did to her in Four To Doomsday. Behind the scenes the reason is the story was written for Tom Baker's Fourth Doctor and two companions - presumably Romana and Adric: I can see Romana taking the Tegan role - and fitting a third in just wouldn't have worked. You'd think with one less companion to keep an eye on the Doctor would succeed in keeping track of them and keeping them out of trouble but no, he leaves Tegan behind under the wind chimes and Adric goes and reactivates the abandoned TSS they find! 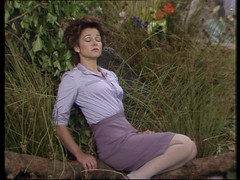 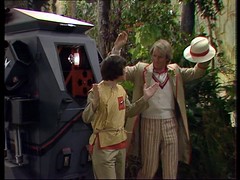 But when you start digging into the episode you realise there's a lot more to it than appears on the surface and even now 40 years later I'm not sure I get the full significance of everything that is going on.

Look at the sequence with Tegan in the black void, which aren't making a lot of sense yet: 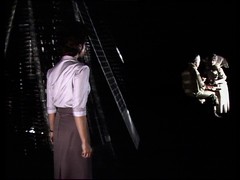 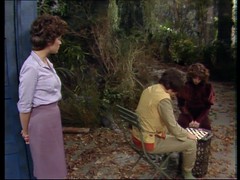 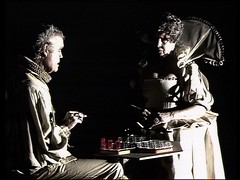 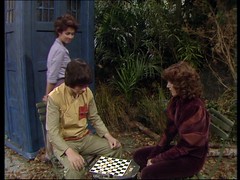 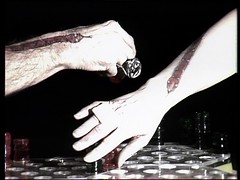 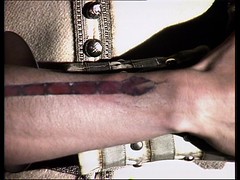 Now I've seen this before, I know where this is all going, but the biblical link of Snakes & Temptation is obvious, although here the snake isn't in paradise...... yet.

Playing Sanders is veteran actor Richard Todd. The story has it that Adric actor Matthew Waterhouse offered him advice on television acting during the making of this production. 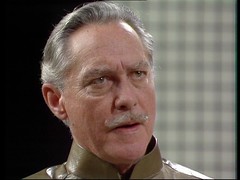 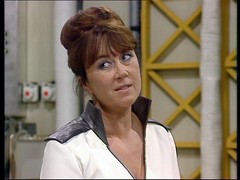 Confusingly there's also a character called Todd, played by Nerys Hughes, formerly of The Liver Birds. She'd recently appeared in The Adventure Game, in an episode broadcast on Doctor Who's 18th Birthday which is one of two still missing from the BBC archives. Many years later she appears in the Torchwood episode Something Borrowed as Brenda.

Putting in superb performance as the unhinged Hindle is Simon Rouse. You can see him in The Professionals episode the Purging of CI5 as Phillips but some years after Kinda he would find fame as Detective Superintendent Jack Meadows in The Bill. 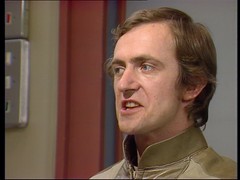 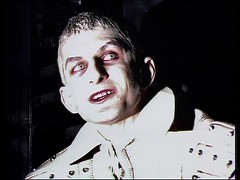 Playing Dukkha is Jeff Stewart who would later find fame as in The Bill as PC Reg Hollis. They're not the only Bill regulars in this serial either...... Stewart was also seen in Douglas Camfield & Robert Holmes' The Nightmare Man as Drummond.

The male games player in the dark realm is Anicca played by Roger Milner. Russell T Davies would later use him in the first episode of Dark Season as the Headmaster. 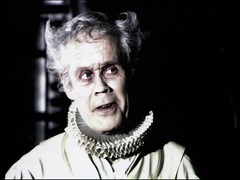 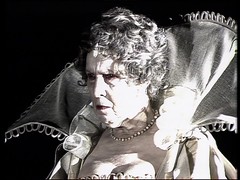 Anna Wing, playing Anatta, would shortly become famous playing Lou Beale on Eastenders. She is the mother of Mark Wing-Davey, who was both the TV & Radio Zaphod Beeblebrox in The Hitchhiker's Guide to the Galaxy She'd been in The Sweeney as Mrs. Haldane in On the Run and appears in Smiley's People as the Woman at Westbourne Terrace