"Your Doctor is a dead man. You saw what was in the cellar. The great reaper, Death!"

The Doctor reveals himself, having found a way through the illusionary but seemingly solid wall. He, his friends & Richard Mace explore the house's cellars, finding caged rats and an alien machine producing the flammable Soliton gas. They are in turn found by an Android, dressed as Death but while escaping from it Tegan & Adric are captured. Doctor, Nyssa & Mace find a half buried escape pod, but are trapped in it by villagers controlled by the alien visitors. Adric & Tegan are interrogated by an the Terileptil leader then flung in cell. They manage to get out of the cell but Tegan is recaptured as Adric escapes through the house's window. Nyssa is sent to the Tardis to build a sonic device to destroy the android while Doctor & Mace go to speak to the Miller who they had seen leaving the house. They are trapped in the Miller's barn by villagers and sentenced to death as plague carriers.

Good stuff again, not really a word wrong I can say about it!

The new monster the Terileptil is a nice bit of work, with a costume from Richard Gregory's Imagineering and a head from the BBC Effects Department's Peter Wragg. The head in particular is superb, with the right hand side of it covered by what looks like a massive injury, giving it a very asymmetric appearance. 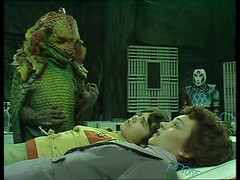 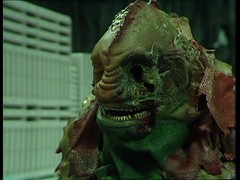 DOCTOR: Nothing in there. Let's get back to the Tardis, help Nyssa.
MACE: Now?
DOCTOR: At once.
VILLAGER: Plague carriers.
MACE: You jest, sir. I am without plague.
VILLAGER: The mark of the plague is on you.
MACE: You're mistaken, sir.
DOCTOR: We haven't got the plague. I can help you. Wait. Listen.
VILLAGER: Execute them!
DOCTOR: Not again. 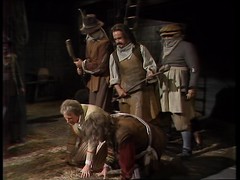 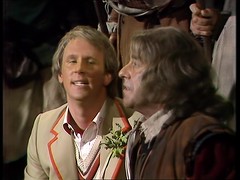 The "Oh no, not again" line at the end of the episode is a nod to the end of the third episode of Four to Doomsday where once again The Doctor is pushed to the floor and is about to be beheaded! 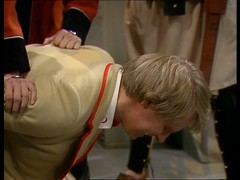 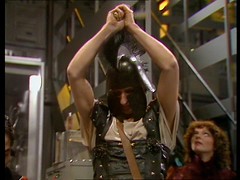 The line dropped into the story that the Soliton gas, which the the Terileptils breath, is highly flammable will become significant later. As 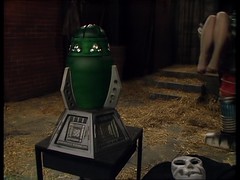 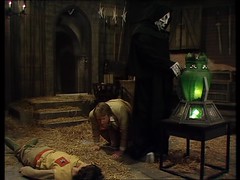 Lot of the little mysteries from the previous episode are cleared up, including what the necklace and power packs are for:

DOCTOR: You see this? This a part of a control bracelet. It's a device used on prison planets to control difficult prisoners. It isn't an ornament. And the thing you saw in the cellar comes from the same place as the bracelet.
MACE: How can that control anyone?
DOCTOR: Like this. If this was on your wrist, you'd have lost control of your mind by now.
MACE: Nonsense, sir. That glow is a conjuring trick. I'm a man of the theatre. I'm not impressed by trickery, however clever it is.

We see several of the villagers enslaved by the bracelets during this episode: 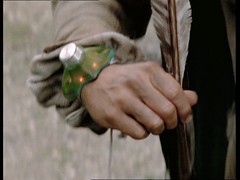 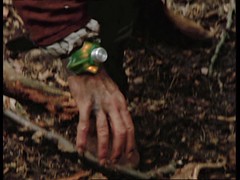 Then there's the shooting star:

DOCTOR: No one here.
NYSSA: The place has been stripped.
DOCTOR: Most of the hardware is up at the house, I should think.
MACE: What is this structure?
DOCTOR: An escape pod. A sort of life boat, only from a ship that flies.
MACE: Flies?
DOCTOR: That's right.
MACE: But how are the dimensions greater within?
DOCTOR: Because it buried itself on impact.
MACE: And how is it lit?
DOCTOR: Vintaric crystals. Quite a common form of lighting.
MACE: I don't understand any of this.
NYSSA: This is all that's left of the craft that brought the android to Earth.
DOCTOR: The lights you saw in the sky a few weeks ago, were the main part of the ship burning up in the atmosphere.
MACE: I can't believe any of the things you are telling me.
NYSSA: It's true.
DOCTOR: The presence of the pod confirms it.
MACE: How do you know all these things?
DOCTOR: Ah. That would be rather difficult to explain.
NYSSA: You can trust us.
DOCTOR: Which is more than you can say for the owners of this ship. 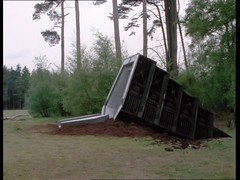 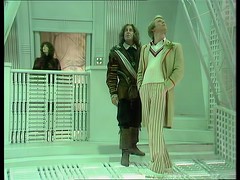 The Richard Mace character is taken & adapted from some of Eric Saward's previous scripting work for Radio 4. In these Mace is a Victorian actor/manager, played by Geoffery Matthews, who becomes involved in strange mysteries but is otherwise similar to his Doctor Who version. The TV version of Mace is played by well known actor Michael Robbins, probably most famous for his appearances as Arthur Rudge, Stan Butler's brother in law in On The Buses. He'd also featured in The Sweeney episode Big Brother a Kevin Lee. Robbins was married to Hal Dyer who viewers my age will know as Mrs Perkins in Rentaghost. 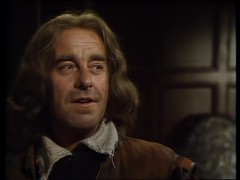 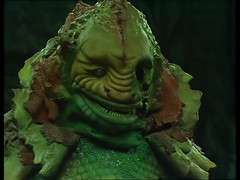 Playing the Terileptil is actor Michael Melia, then mainly known as an actor that played heavies. He too had been in The Sweeney, playing Rudd in Messenger of the Gods and had played a Federation Trooper in the Blake's 7 episode Aftermath, where he's alongside an officer played by Richard Franklin, who was Captain Mike Yates in many Third Doctor Jon Pertwee UNIT stories. In Inspector Morse Melia plays a Decorator in The Secret of Bay 5B. In 1990 he gained national recognition as Queen Vic LandlordEddie Royle in Eastenders. He's not the first actor to play a Queen Vic Landlord to appear in Doctor Who: Mike Reid, who played Eastenders' Frank Butcher, was in the War Machines as a supporting artist and appears in a few other 1960s stories. The Vic's most famous Landlord will be along in a short while in Episode 620 Resurrection of the Daleks part 2.

The Terileptil's Android is played by Peter van Dissel who had two prior encounters with science fiction much earlier on in his career: in 1969 he was in Gerry Anderson's Doppelgänger (aka Journey to the Far Side of the Sun) as Mallory and in the same year he's in the now missing third season Out of the Unknown episode Immortality Inc as Earth Blaine. 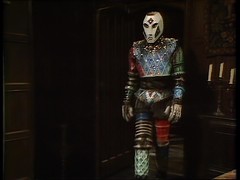 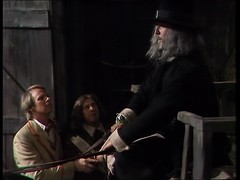 The lead Villager, who we saw in episode 1 in the forest and is leading the mob in the barn is Richard Hampton. He was also in a now missing Out of the Unknown episode: he played Chief Supt. Mailer in the second season episode The World in Silence. He was in The Sweeney twice: in 1975's Jigsaw he was Hilary Elkin and in 1978's The Bigger They Are he was Barnes. In The Professionals he plays Morgan in Old Dog with New Tricks, the first episode filmed which was intended to be shown first but was bumped to third in the running order. 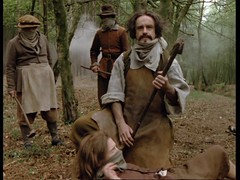 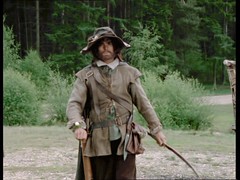 The Poacher, who leads the group attaching The Doctor, Mace and Nyssa is played by Neil West. His accomplice the Woodcutter, who's on the left of the picture below, is played by Thomas Knox who was an Acolyte in Face of Evil, while the Farmhand on the right is James Tye, who I can find no record of elsewhere in Doctor Who or on IMDB 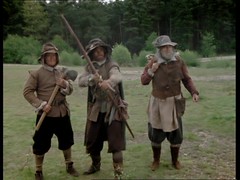 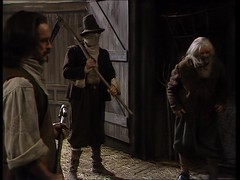 The Scytheman is Jeff Wayne who was a Mentiad in The Pirate Planet and a Pangol Doctor image in Leisure Hive. He'll be back as a Cyberman in Earthshock and a Trooper in Resurrection of the Daleks. In Blake's 7 he's a Federation Trooper in Blake.

In amongst the Villagers we have Charles Adey-Grey who was an American Diplomat in Day of the Daleks, the Theatre Doorkeeper in The Talons of Weng-Chiang and a Nobleman in Androids of Tara. In Doomwatch he plays a Male Magistrate in the now missing second episode Friday's Child.

Keith Guest had been a Marshman in Full Circle and a Security Guard Logopolis.

Tom Gandl had been a Citizen in Full Circle and one of the Peasants in the Village Centre in State of Decay. He returns as the Male Onlooker in Remembrance of the Daleks. In Blake's 7 he was a Kairos Guard / Labourer in The Harvest of Kairos.(uncredited)

Victor Croxford had been a Laboratory Technician in Claws of Axos and a Peasant in woods in State of Decay.

Bill Whitehead was previously a Councillor in The Time Monster, a Noble in Androids of Tara and a Logopolitan in Logopolis