"I have a sneaking suspicion this fire should be allowed to run its course."

The Doctor frees Tegan & Mace from the Terileptil control. The Terileptil leader leaves for the city with the plague, sending the miller to secure the house and the Android to bring the Tardis to Earth. The Android scares off the men holding Adric and follows him back to the Tardis where Nyssa destroys it with the sonic booster. Escaping from their cell the Doctor, Tegan & Mace free deactivate Terileptil control system. Adric brings the Tardis to the house and the Doctor seeks the Terileptil in the nearest city, London, by tracing some high technology emissions. They materialise outside a bakery where the Miller's horse & cart are waiting. Going inside they confront the Terileptils but in a scuffle the bakery is set on fire and the Soliton gas explodes. The Doctor has the remaining plague samples thrown in the fire and he makes an exit with his friends in the Tardis as Mace stays to fight the flames. As the Tardis leaves the London Street Name is revealed - Pudding Lane. 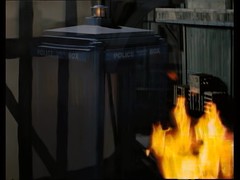 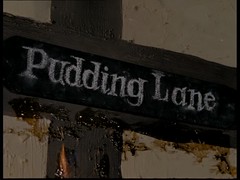 This is one of those occasions where the revelation at the end of the episode, that the Doctor caused the great fire of London, will be the main thing that stays with you. Oddly it's the dropped torch and overloading gun which are seen to set things going and not the machine producing the soliton gas, which was flagged as volatile when mixed with oxygen in episode 2! 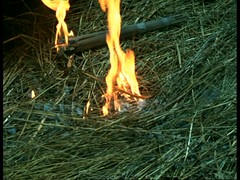 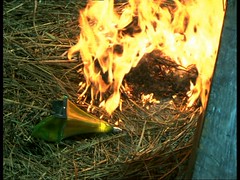 The Doctor causing The Great Fire of London is another entry into the cannon of his interference in/contribution to historical events including, but not limited to, the invention of fire in An Unearthly Child, the burning of Rome in The Romans, making sure the Battle of Stamford Bridge occurred in The Time Meddler and inventing the Trojan Horse in The Myth Makers. Historians argue as to whether the fire actually did contribute to stopping The Great Plague but here it foils the Terileptil plot.

But what about the rats left in the cellar of the house? The Doctor is rather relying on that cage holding them in until they die!

Before their death we get a much better look at the other two Terileptils, revealing that they're much more colourful than their leader. 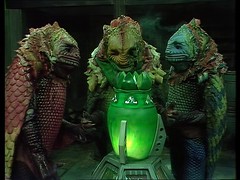 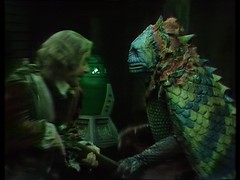 Their death is rather graphic though, with the leaders face melting and bubbling away in the flames! 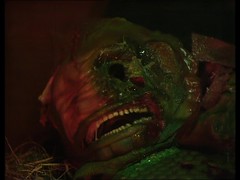 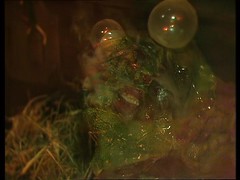 Bar an illusionary appearance in Time Flight this is the last we see of the Terileptils. There's a reference to Raaga, the planet they were imprisoned mining on, in The Awakening and one of the costumes resurfaces as the Possicar Delegate in Trial of a Timelord: Mindwarp, but other that that, nothing. A shame as I thought they had some unfulfilled potential and would have been good for a rematch.

Their android too also gets destroyed in this episode, vibrated to pieces by the sonic booster that Nyssa has spent the last two episodes building in her bedroom: 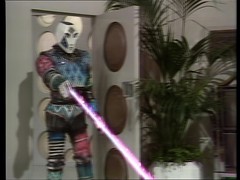 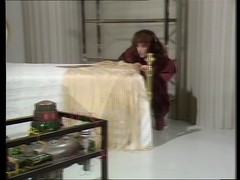 Nyssa has spent half of this story in the Tardis, following sleeping for all of Kinda. Fortunately she gets more of the limelight next story.

Adric's "delicate technical adjustment" - thumping the Tardis console - to get it moving makes me giggle:

NYSSA: Try and think what the Doctor would do if he were here.
ADRIC: He'd probably get angry.
NYSSA: I said empathise, not be silly.
ADRIC: Got it!
NYSSA: Brilliant! 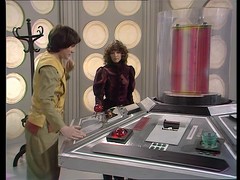 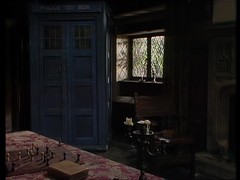 It's even more amusing because the Doctor does do exactly the same thing a few minutes later!

Richard Mace is the first visitor to the Tardis during Fifth Doctor Peter Davison's time but he won't be the last as the next few stories see a cavalcade of visitors!

MACE: This isn't possible.
ADRIC: That's what I thought at first, but it is.
MACE: It's amazing! Quite amazing. 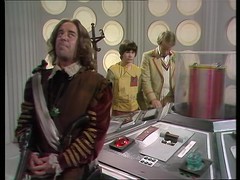 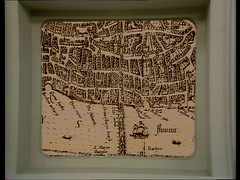 Visitors to The Tardis have been relatively rare, with Laurence Scarman, in Pyramids of Mars, and Lowe, in Invisible Enemy, both played by Michael Sheard springing to mind from the early years of the Fourth Doctor . There's a few more in both of the Doctor's Galifrey visits in Deadly Assassin and Invasion of Time, and Duggan in City of Death. Tom Baker's last season saw an increase with the Outlers in Full Circle, Biroc in State of Decay, The Keeper in Keeper of Traken and The Watcher in Logopolis!

The only new speaking character in this episode if the briefly seen Nightwatchman played by Don Paul, who I can't find anywhere else in Doctor Who or on IMDB! 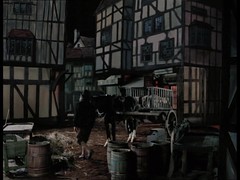 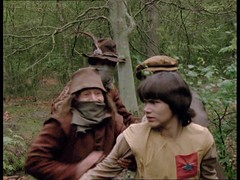 Appearing in this episode as one of the Villagers who attack Adric is stuntman Stuart Fell. He had previous been a UNIT soldier & Auton in Terror of the Autons, UNIT staff member & a photographer in The Mind of Evil, a UNIT Soldier & Axon in The Claws of Axos, Alpha Centauri in The Curse of Peladon which was his first credited appearance, a Guard, Sailor & Sea Devil in The Sea Devils, a Functionary in Carnival of Monsters, Alpha Centauri once again in The Monster of Peladon, the Tramp in Planet of the Spiders part two, who the Doctor drives the hovercraft over, and a Guard later in the same story, a Wirrn Larvae & Wirrn in The Ark in Space, Double for Styre in The Sontaran Experiment, The Kraal in The Android Invasion part three, the Monster in The Brain of Morbius, Forking peasant / Guard / Acolyte in The Masque of Mandragora, a Policeman, Coolie & the Giant Rat in Talons of Weng Chiang, a Guard in The Sun Makers, a Sontaran in The Invasion of Time, a Shrivenzale in the Ribos Operation, Roga in State of Decay, and a Castrovalvan Warrior in Castrovalva. He returns one more time as a Cyberman in The Five Doctors plus he did stunts in Terror of the Autons, was fight arranger in The Talons of Weng-Chiang, more stunts in The Ribos Operation & Full Circle and served as fight arranger again in State of Decay. In Blake's 7 he was Dortmunn in Mission to Destiny, a Subterron in Project Avalon, a Goth Warrior in The Keeper, a Sarran in Aftermath, a Labourer in The Harvest of Kyros, a Guard in City at the Edge of the World, a Federation Trooper in Rumours of Death, a Guard in Moloch, a Gunman in Death-Watch, a Link in Terminal & Rescue and a Hommik Warrior in Power plus he was the stunt coordinator for Project Avalon, The Keeper, Aftermath, Volcano, The Harvest of Kyros, City at the Edge of the World, Rumours of Death, Moloch, Death-Watch, Terminal, Rescue & Power. He plays a man in the Doomwatch episode Spectre at the Feast. He's in The Empire Strikes Back as a Snowtrooper and does stunts in Return of the Jedi. He also does stunt work on the Roger Moore James Bond films For Your Eyes Only, Octopussy & A View to a Kill. And so much more.

One of his Masked Villager companions is another long-time stuntman for the series, Alan Chuntz. Chuntz was previously a UNIT Soldier in The Invasion, Technician Harvey & a Security Guard in The Seeds of Death, one of Collinson’s Men & a UNIT Soldier in the Ambassadors of Death, a Technician, UNIT solider and RSF Soldier in Inferno, during which he was injured when Jon Pertwee ran him over in Bessie, an Auton in Terror of the Autons, a Prisoner in Mind of Evil a Sea Devil & Sailor in The Sea Devils, Omega's Champion in The Three Doctors, a Security Guard in The Green Death, a Guard in Planet of Spiders, a soldier in Genesis of the Daleks, a Vogan in Revenge of the Cybermen, the Doctor's stunt double in Planet of Evil, the Chauffeur in Seeds of Doom, a Horda Pit Guard in Face of Evil, a Coolie in Talons of Weng-Chiang, and a guard in State of Decay. This is his last Doctor Who appearance.

He also did stunt work on the Sean Connery James Bond film You Only Live Twice and on The Italian Job.

The Visitation isn't a bad story, building on genuine historical event, the Plague & the Fire, and adding a science fiction twist to it. It's competently done, easily accessibly & understandable and there's not really a lot wrong with it. On the strength of this it's writer Eric Saward got the script editor's job and he'll be making an important contribution for the next few years.

The Visitation was repeated in 1983 as the first of that summer's repeat stories over the evenings of 15th to 18th August. The author novelised his script in 1982 and it was the first Target novel featuring the fifth Doctor to be released and the first to bear a photo cover. It was released on video in July 1994 in a double pack with the following story, Black Orchid, and on DVD in January 2004.