572 The Visitation: Part One

"Call yourself a Time Lord? A broken clock keeps better time than you do. At least it's accurate twice a day, which is more than you ever are!"

1666: The squire and his family are settling down for the night when they are interrupted by first lights in the sky and then an inhuman visitor to their house. 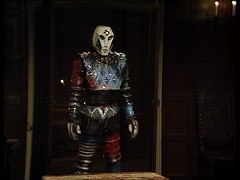 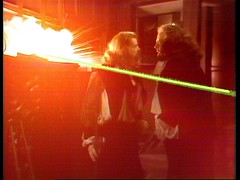 The Doctor is once again trying to return Tegan to Heathrow Airport in 1981 and while he gets the location right they find themselves some 300 hundred years too early. Chased away from the village they make the acquaintance of Richard Mace, an itinerant thespian, who shelters them in the barn he has been using. He tells them of the comet seen in the sky, and the Doctor takes an interest in the necklace he's wearing, an object he found in the hayloft. Nyssa finds power packs in the barn so the Doctor decides to call on the barn's owner, the local squire. When the door isn't answered the Doctor & Nyssa gain entry via an unlocked window, finding weapons missing, spilt gunpowder and a damaged powerpack. Exploring the house the Doctor is intrigued by a wall at the foot of a staircase. Nyssa admits Adric, Tegan & Mace but when they return to the staircase the Doctor has vanished and something locks them in.

Cracking episode that, fab. From the opening scenes with the family, the threat posed by the plague & the villagers, through the richness of Mace's speech to the mystery of the ending. Job well done all round.

We get a long set of opening scenes in the Tardis which recaps events in Kinda - I wonder was the episode running a tad short?

DOCTOR: How many times have I told you, Adric, not to interfere with, with things that you don't understand.
ADRIC: I was trying to escape.
DOCTOR: In the TSS? You were lucky you didn't destroy the whole Kinda tribe.
ADRIC: I didn't realise it would be that difficult to control.
DOCTOR: That isn't the point. You should never have got into that unit.
ADRIC: Well, as it turned out no one was hurt.
DOCTOR: Apart from Aris.
ADRIC: A flesh wound.
DOCTOR: Try to understand, Adric, because you get away with something, it doesn't justify it.
ADRIC: I'm sorry.
DOCTOR: Next time you want to escape from somewhere, walk.
NYSSA: Poor old Adric. Always in trouble.
ADRIC: And I try so hard.
DOCTOR: Is Tegan ready?
NYSSA: I'll check.
ADRIC: What's that?
DOCTOR: A fault.
ADRIC: Serious?
DOCTOR: Must be the lateral balance cones again. You know, I must do some maintenance after we've delivered Tegan.
ADRIC: It's going to seem strange without her, though I must admit I'm not entirely convinced that she likes me.
DOCTOR: Now, don't jump to conclusions, Adric. Sometimes we humanoids try to disguise our, our true feelings. Well, don't just stand there, Adric, help me.

NYSSA: What's the matter?
TEGAN: It's only sunk in properly, what happened to me on Deva Loka.
NYSSA: What? The Doctor said nothing eventful had occurred.
TEGAN: He would. But while you were enjoying forty eight hours peaceful sleep in the delta wave augmenter, my mind was occupied. Taken over.
NYSSA: By whom?
TEGAN: More a what. Something called a Mara. It makes me shiver to think of it.
NYSSA: You weren't hurt?
TEGAN: No. No, but that's not the point. It's unnerved me.
NYSSA: You'll soon be on Earth with all this unpleasantness forgotten.
TEGAN: Can't wait.
NYSSA: At least, you won't have any awkward questions to answer about where you've been.
TEGAN: So the Doctor says. I don't understand how.
NYSSA: Just accept what he says. You'll arrive back at the airport exactly on time for your flight, half an hour after you entered the Tardis.
TEGAN: Some half hour. Now I have to pretend that nothing's happened in the mean time.
NYSSA: You'll soon settle down.
TEGAN: I hope so. Nyssa, I know I haven't always been the best of companions. I'll miss you. All of you.

During this we're treated to a look at the room which Nyssa and Tegan apparently share: There's items of both their clothing hanging behind the door. 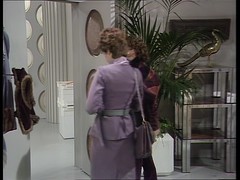 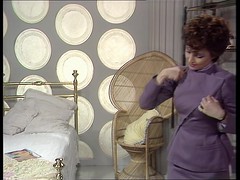 I moaned in Castrovalva part 2 about lack of costume changes, here it's apropriate for Tegan to be wearing her Air Hostess uniform as she expects to be getting out the Tardis at Heathrow and going to work! Unfortunately that doesn't go quite to plan..... 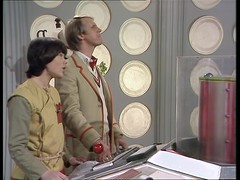 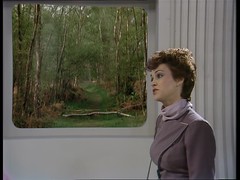 TEGAN: Is that supposed to be Heathrow?
ADRIC: It is.
TEGAN: Well, they've certainly let the grass grow since I was last there.
ADRIC: Well, actually, they haven't built the airport yet. We're about three hundred years early.
TEGAN: That's great. Perhaps I can go out, file a claim on the land. When they get round to inventing the aircraft, I'll make a fortune.
DOCTOR: Hmm, yes, a small error has been made.
TEGAN: You call three hundred years a small error?
DOCTOR: It's probably due to nothing more than a temperamental solenoid on the lateral balance cones.
TEGAN: Why do you always have some incomprehensible answer?
DOCTOR: And, as you know, the Tardis isn't always Er, reliable.
TEGAN: Call yourself a Time Lord? A broken clock keeps better time than you do. At least it's accurate twice a day, which is more than you ever are.
DOCTOR: Why does she always overreact?
NYSSA: I think she's finding the idea of going more painful than she thought.
DOCTOR: Then why didn't she say so, rather than fly off the handle like that.
NYSSA: That's Tegan.
ADRIC: Perhaps you'd better talk to her.
DOCTOR: No, no, no. Too much has been said already. Earthlings.

The idea that there's been a shift in Tegan's attitudes is an interesting one, especially given the events that she's just experienced on Deva Loka. On the one hand such a trauma might increase her desire to get home. On the other, she looks like she's struggling to get her head round it and might need a little more time before returning to normality. A third, slightly more sinster, option is that SOMETHING wants Tegan to stay .....

The Doctor's wander outside only goes beyond the historical setting when he talks with Mace:

DOCTOR: How bad is the plague?
MACE: Oh, the worst I've ever seen. More virulent here than in the city, but that's only to be expected.
DOCTOR: Why?
MACE: Did you not see the comet a few weeks ago? A portent of doom, if ever I saw one. Its aurora barely faded from the sky before the first local case was reported.
ADRIC: You were clear until then?
MACE: Oh, completely.
DOCTOR: They're not due for a comet for years.
MACE: It lit up the sky as I've never experienced it before.
NYSSA: Are you sure it wasn't a meteor?
MACE: Call it what you wish. I have seen many falling stars, but this was without parallel.
DOCTOR: Interesting, and so is the ornament around your neck.
TEGAN: Doctor, don't you think we should be getting back to the Tardis?
DOCTOR: Yes. Not yet. May I see?
MACE: Oh, surely. I found it in the loft last night.
DOCTOR: Hmm. Interesting piece of work. What do you think?
NYSSA: It's made from polygrite, isn't it?
DOCTOR: Yes.
NYSSA: From such a primitive society? 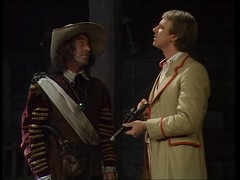 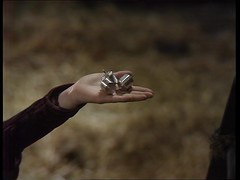 Further eveidence is provided by Nyssa finding the power packs, then the empty house with the scorch marks on the walls and the staircase leading to a brick wall. We on the other hand have seen the android and it's laser blasts so have a bit better idea of what's going on than the Doctor does.

A large amount of this episode is mainly set outdoors, in Peter Davison's first trip out on location. "Ah, what about Castrovalva?" I hear you cry. Look again at the production order:

* Actually Eric Saward but credited as Antony Root due to Saward writing the story!

The broadcast order is however:

The woodland scenes are filmed at Black Park, previously the location for Adric's debut story Full Circle. Under the Heathrow flightpath (somewhat ironically as it's serving as Heathrow in the middle ages) filming was constantly interrupted by plane noise..... until the Heathrow air traffic controllers went on strike during the last day of filming enabling the shooting schedule, built around the plane times, to be completed far earlier than expected. 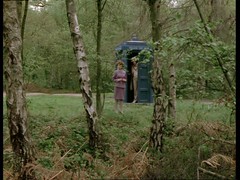 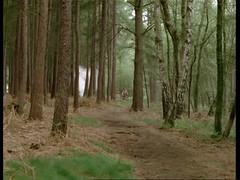 The Tithe Barn in Hurley serves as the house. 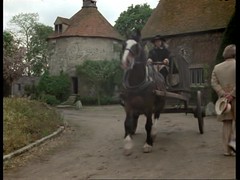 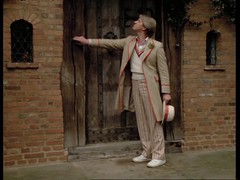 Chronologically this is is Eric Saward's first involvement with Doctor Who. The script for the story was developed under previous script editor Christopher H. Bidmead, who encouraged Saward to apply for the script editor's job when he left. He discovered that the post had already been filled by Antony Root who'd been given a 3 month attachment to the show but when Root left to work on Juliet Bravo Saward won the post and indeed ended up giving the final polish to his own script.

Amusingly two of the most famous actors in this story are killed off in the first few minutes.

The Squire is played by John Savident who even then was reasonably well known. He'd appeared in Doomwatch as The Minister, a substitute for the usual Minister played by John Barron. Savident's character appears in the first series episode Burial at Sea, which is missing, and the second season episode confusingly named The Web of Fear, which exists and can be seen on The Doomwatch DVD. In The Professionals he plays Robert Plumb in Servant of Two Masters while he had a regular role in Yes Minister as Sir Frederick 'Jumbo' Stewart, Permanent Secretary of the Foreign and Commonwealth Office, appearing four times in the first season in The Official Visit, The Economy Drive, The Writing on the Wall & The Right to Know. He was in Blake's 7 twice as Fleet Warden-General Samor in the second series episode Trial and had recently done a memorable turn in the fourth season episode Orbit as the scientist Egrorian. Later in 1982 he appears in the Original Pilot for The Black Adder as The King, the role filled by Brian Blessed in the series, and is in Jeeves and Wooster as The Duke of Chiswick in The Full House. He would later gain national recognition (and press notoriety) as Fred Elliot in Coronation Street. 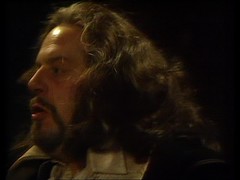 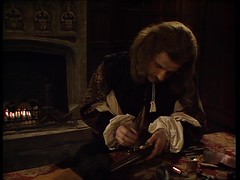 Anthony Calf plays Charles, the Squire's son. He has a CV as long as your arm but is probably best known for playing D.A.C. Strickland in New Tricks. He's also been in Lewis as Malcolm Finniston in Dark Matter and the new series of Doctor Who as Godsacre in Empress of Mars. He's married to the actress Caroline Harker and you can hear him interviewed in Toby Hadoke's Who's Round 114.

The daughter Elizabeth is played by Valerie Fyfer. 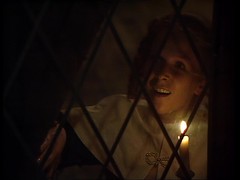 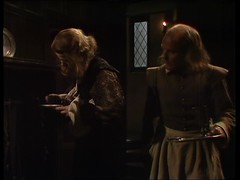 The Squire's servant Ralph is played by John Baker, who has prior Who form having appeared in Colony in Space as a Timelord. He is probably not the same John Baker who is a Guard in Dragonfire & a Paramilitary in Silver Nemesis!