"He is not concerned with bringing civilisation. He has the greatest contempt for anyone but himself. He wants to rob Earth of its minerals in order to travel faster than the speed of light."

Nyssa deactivates the robot executing the Doctor saving his life. The Doctor, Adric & Nyssa are taken to Monarch where the Doctor feigns co-operation. Nyssa is held hostage to insure his good behaviour and a recreational is organised. The Doctor convinces first Adric and the Lin Futu to help him. They rescue Bigon and recruit him and then free Nyssa. The Doctor & Adric attempt to get the Doctor to the Tardis using borrowed space gear but they are interrupted by first Persuasion & the Enlightenment. Both ministers have their circuits thrown overboard but not before the Doctor is cut loose. He uses a cricket ball's momentum to propel him to the Tardis which he brings back to the ship. Monarch deactivates the ship's life support forcing them to use the breathing gear again. The Doctor takes Monarch's poison to the Tardis but Monarch intercepts them. 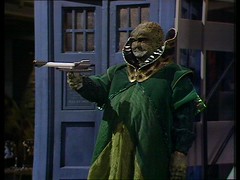 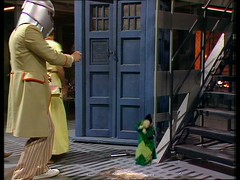 The Doctor throws the poison at Monarch which kills him: he was still organic. The Tardis crew take their leave of Bigon and the android copies, but once they are in the Tardis Nyssa collapses. 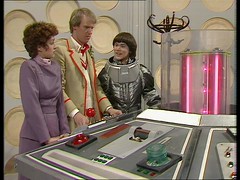 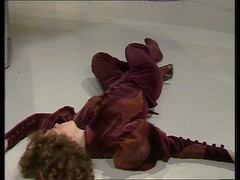 A little bit of a rushed mess.

The Doctor's escape from the Grecian Swordsman is cleverly engineered by Nyssa... 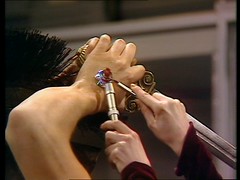 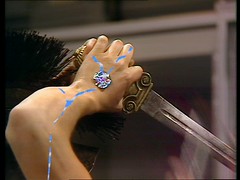 MONARCH: The graphite of the pencil conducted the power of the sonic device causing a short circuit.

For which she is rightly praised.

DOCTOR: Oh, thank you, Nyssa. It was brilliant, by the way. Quite brilliant.

We then go through a round of clearing out the Doctor's pockets, something we've not seen for a while: 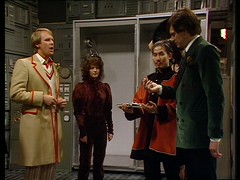 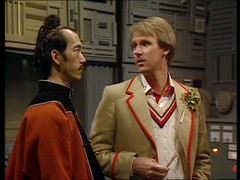 For those who don't know, a Chinaman in cricket is a delivery bowled by a left handed wrist spin bowler. He must have been rather good at it took support the claim that he once took 5 wickets for New South Wales! Fine in itself.... but it creates problems later.

MONARCH: Ah, Doctor. Your machine is reluctant to break free from mine.
DOCTOR: I can't think why.
MONARCH: A more considerate guest than you, perhaps.
DOCTOR: Oh, is it usual for a host to kill a guest?
MONARCH: Oh, in certain rarified circles, but your life is forfeit because you were plotting against me.
ADRIC: Doctor?
DOCTOR: My actions were motivated by scientific curiosity.
MONARCH: Not as they were reported to me.
DOCTOR: Reports can be garbled, your Majesty.
MONARCH: Not this time. Was it scientific curiosity which caused you to interfere with my monopticons?
DOCTOR: I wouldn't dream of interfering with your monopticons.
MONARCH: Enough of these recriminations. I propose to show my moral superiority by sparing your life. I'm not, as you would have others believe, a wanton destroyer, but I must protect myself and my mission. Now the girl Nyssa will be held hostage. If you're restrained, you'll come to no harm. Beware you're not the cause of her destruction. Take her to Lin Futu. Let him sedate her and await my orders. Control, let there be a recreational. For while my eyes are restored from the results of the Doctor's scientific curiosity, I would have my family under my benevolent gaze. You have my permission to withdraw.
DOCTOR: Thank you, your Majesty.

The Doctor then starts on a lengthy to do list, first persuading Adric back on side:

DOCTOR: Now listen to me, you young idiot. You're not so much gullible as idealistic. I suppose it comes from your deprived delinquent background. Monarch is the greatest being in the known universe for evil. He will destroy Earth and much more if he's not stopped.
ADRIC: Back there you said
DOCTOR: Yes, back there he could hear us. Here he can't. I'm playing for time.
ADRIC: But you're wrong, Doctor. He's civilised
DOCTOR: Do you want to save Nyssa?
ADRIC: Of course I do.
DOCTOR: Then shut up and listen. He is not concerned with bringing civilisation. He has the greatest contempt for anyone but himself. He wants to rob Earth of its minerals in order to travel faster than the speed of light.
DOCTOR: All right, all right, if that doesn't convince you, why does he carry poison on his ship?
ADRIC: Poison?
DOCTOR: It's stored in the Mobiliary. If his mission is peaceful, why does he want the poison?
ADRIC: Well, history, research.
DOCTOR: Do you really think that?
ADRIC: He could have had you killed and yet he spared your life. Why?
DOCTOR: Because he doesn't want to upset you yet.
ADRIC: I don't believe you.
DOCTOR: Look, he wants to use you. His subjects are all synthetic. You are flesh and blood. If you speak up for him on Earth, you can delay their opposition.
ADRIC: I still don't understand.
DOCTOR: No, you don't, do you. Look, the Urbankans are synthetic. They are not like you and me. However sophisticated their circuitry, they are still machines. With me?
ADRIC: I think so.
DOCTOR: Well, make up your mind. We haven't much time.
ADRIC: Why, what are you going to do?
DOCTOR: I haven't the slightest intention of telling you until I know if you're with me.
ADRIC: Yes. All right then, yes.
DOCTOR: I don't believe it.

Then he need to recruit Bigon.... and for that he needs help from Lin Futu:

LIN FUTU: What are you doing here?
DOCTOR: Saving your life, I hope.
LIN FUTU: Seize him!
DOCTOR: No! No, hear me out. You are in great danger.

DOCTOR: You must know all I say is true. Put them back. Bigon must have them back.
LIN FUTU: You know I cannot do this.
DOCTOR: You must. Lin Futu, you are a very old and wise man. You have been promised leadership of your people on Earth.
LIN FUTU: Yes.
DOCTOR: Do you think for one moment that Monarch will honour that? The Chinese are the most populous and powerful race on Earth. Once Monarch grasps that, what hope is there for you?
LIN FUTU: How can I re-circuit Bigon without Monarch knowing?
DOCTOR: Leave that to me. Will your dragon dance be included in the recreational?
LIN FUTU: It can be.
DOCTOR: Then let it be next. 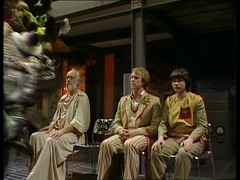 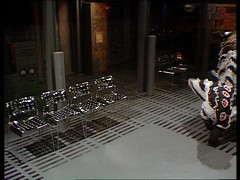 The recreational stuff is wearing a bit thin by this stage in the story but at least it proves useful to the plot with the dragon dancers providing the cover needed to abduct Bigon from the hall to the mobiliary where Lin Futu can repair him.

BIGON: Thank you. I am very glad that you are with us.
DOCTOR: What about the Princess and Kurkutji?
BIGON: They too will be with us when they hear the truth. I will summon them.
ADRIC: What are we going to do?
DOCTOR: Well, somehow I must get to the Tardis. There are hatches. I must try to get to it on a lifeline.
BIGON: Hatch nine is nearest.
LIN FUTU: You will need life support and protective covering.
ADRIC: We have this.
DOCTOR: Oh, no, no, no, that won't do for the temperature out there. And anyway, I'll need your help.
LIN FUTU: Here. Used for repairs and maintenance topsides. Our lubrication freezes and our joints seize up.
DOCTOR: Splendid. Adric. I can use this, but we have only six minutes. That's as long as I can stand sub-zero temperatures.

Sub zero temperatures are one thing Doctor, but what about the vacuum of space? Just an air breathing helmet will prove of little use then!

The spacesuit Adric uses makes him look a bit like a Sontaran! 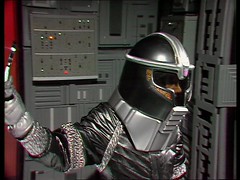 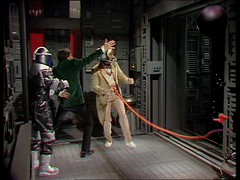 Both Persuasion and Enlightenment meet their end trying to stop the Doctor getting to the Tardis, their chips flung into space. Enlightenment does succeed in marooning the Doctor though before her demise, leaving the Doctor to improvise a solution with the cricket ball we saw earlier, bowling it at the ship and taking a return catch to gain it's momentum. 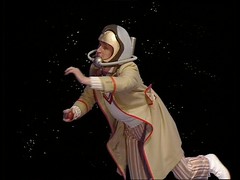 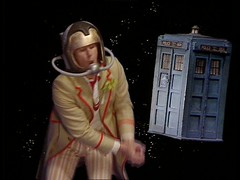 The science is relatively decent here the problem is he throws the ball right handed when previously he's claimed to bowl left arm wrist spin! Three stories later we'll see him having a bowl and he definitely bowls right handed there. Is the Doctor ambidextrous or was his spell as a left arm wrist spinner for New South Wales in a previous incarnation and he has he changed which hand he uses between regenerations?

Monarch's demise might seem a little contrived, suddenly he's flesh when they've made him out to be an android for the last few episodes. But it is hinted at: who else is eating the food and why else does he have the ship restore the atmosphere? However the Doctor does seem a little quick to be removing his helmet afterwards, has the poison's effect been that local or dispersed that quickly? If so it's not going to be a lot of use on Earth is it?

So how's the serial as a whole? Well it's a little bit of an oddity. Stratford Johns makes Monarch into a decent villain and Persuasion & Enlightenment are suitably slimy henchmen. Annie Lambert's Enlightenment is perhaps a little underused and Paul Shelley's Persuasion spends most of this episode coming into Monarch's chamber and getting sent out again. But while the threat to the Tardis crew is there, the overall menace to Earth seems remote and the recreationals get a bit repetitive after a while.

Four to Doomsday was novelised in 1983 by Terrance Dicks.