"There is something amiss with Castrovalva, but because your perception is part of it, you cannot see it!"

The Doctor, affected by the spatial distortion, returns to his quarters to rest. Nyssa & Tegan locate the missing Zero cabinet being used as a wash tub by the Castrovalvan women and return it to the Doctor. The Doctor demonstrates to Mergrave & Ruther what is wrong with Castrovalva when they identify important landmarks as being in multiple locations on the map. They resolve to go and see the Portreeve with the Doctor travelling in the Zero Cabinet. The Doctor secretly sends the cabinet on ahead with Nyssa & Tegan while he confronts the librarian Shardovan. As Nyssa & Tegan confront the Portreeve he reveals himself to be the Master, destroying the Zero Cabinet, revealing it to be filled with books, and cancelling Ruther's existence using the the Tapestry which the Doctor reveals is powered by Adric & Block Transfer Computations, which have been used to create Castrovalva and it's inhabitants. Shardovan sacrifices his life so that Adric can be freed and Mergrave prevents the Master from leaving Castrovalva as it collapses in on itself, the Doctor & his companions narrowly escaping to the woodlands outside and the Tardis.

DOCTOR: Oh, I think so. In fact, I feel quite like my old self. Well.....
TEGAN: Yes?
DOCTOR: Well, whoever I feel like, it's absolutely splendid! 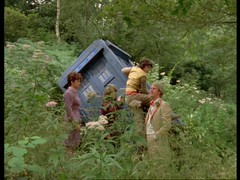 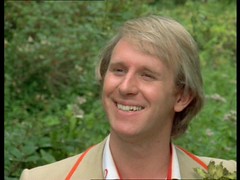 The trap at Castrovalva is sprung as it's geography starts to do weird things. The Doctor test Mergrave on the location of his pharmacy and gets an odd answer:

DOCTOR: Now, the library, the square, the Portreeve's house. Now, where's your pharmacy?
MERGRAVE: Up here, sir. And down here. And round here. And along here also.
DOCTOR: Four pharmacies in a small place like this?
MERGRAVE: No, sir. I have but one.
DOCTOR: You positioned it four times.
MERGRAVE: It may be approached, sir, by many different routes.
DOCTOR: Hmm.
DOCTOR: Valeriana officinalis centiculare europea. And just a hint of rosemary.
MERGRAVE: You understand medicine, Doctor.
DOCTOR: Not as well as you. But I'm afraid one of us is deluded about geography. 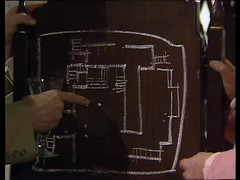 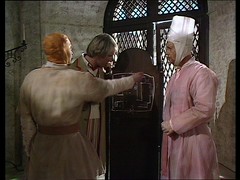 Then Ruther reveals the Portreeve's house exists in multiple locations too!

TEGAN: We found it, and no thanks to these Castrovalvan people. They kept leading us round and round and back to the square.
DOCTOR: Well, that's Castrovalva, not Ruther. I suppose you know the whereabouts of the Portreeve's house.
RUTHER: Nothing is more certain, sir.
DOCTOR: Well put. Show us on the map.
RUTHER: This is the Portreeve's house, along here, down there..... round there.
MERGRAVE: The Doctor has been explaining to me. I almost grasp it.
RUTHER: There is something amiss with the map.
DOCTOR: There is something amiss with Castrovalva, but because your perception is part of it, you cannot see it.
RUTHER: I am a rational man, sir. Explain this interesting idea.
DOCTOR: Yes, well, I'm afraid that would take some doing.

Why should I have suspected the Portreeve a the villain behind the plot too? He's a kindly old man wearing white! 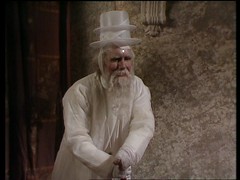 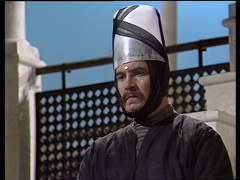 It had to be Shardovan, he was wearing black and had a moustache and was obviously the evil genius behind it all. Even watching it now I get the impression Shardovan is built up as being an obvious villain right up until the point the Master is revealed.

TEGAN: You hid this deliberately.
SHARDOVAN: Assuredly, ma'am, no impropriety was intended.
TEGAN: You're all part of this. It's a conspiracy.
RUTHER: They have formed the suspicion that the Doctor has been ensnared.
SHARDOVAN: Ah. They cannot think that.
NYSSA: Come on. We must get this back to the Doctor straight away.

He's accused of faking the history of Castrovalva:

DOCTOR: This library of Shardovan's, are all the books like this?
NYSSA: Yes, why?
DOCTOR: These volumes chronicle the rise of Castrovalva out of an alliance of warring hunters twelve hundred years ago. Or purport to chronicle.
MERGRAVE: Purport, you say?
RUTHER: That, sir, is our official history.
MERGRAVE: From Castrovalva's first beginnings to the present day.
DOCTOR: Yes, well, I'm no expert, but I have the strongest possible hunch that these are forgeries.
RUTHER: What do you say, sir?
DOCTOR: Oh, the threads, the bindings, the paper, are as near the real thing as may be, but the contents are faked.
NYSSA: How can you tell?
DOCTOR: There is something we're all overlooking.
NYSSA: Yes? What, Doctor?
DOCTOR: I don't know. I'm overlooking it, too. But I'm certain the whole history's been invented.
TEGAN: By Shardovan.
NYSSA: But why? To hide something?
TEGAN: Something about the real history. Doctor?
DOCTOR: If there ever was a real history.

And he' generally been rude and obstructive ever since we met him.

But the Doctor has seen a little further than the rest of us, helped by a hint from Mergrave:

DOCTOR: Tell me, Mergrave, what do you see out of the window?
MERGRAVE: Well, sir, the town square, the library, the Portreeve's house and my own pharmacy. In fine, sir, the dwellings of Castrovalva.
DOCTOR: And it all makes sense to you?
MERGRAVE: Strange question. Shardovan has asked the same.
DOCTOR: Shardovan.

And as the Zero Cabinet is carried to the Portreeve's house, the Doctor and Shardovan finally get the chance of a chat:

DOCTOR: You're the man I want.
SHARDOVAN: Explain yourself, sir.
DOCTOR: You're the only man here who could not be persuaded to join the hunting ritual.
SHARDOVAN: Ah. My natural indolence would not permit it.
DOCTOR: Your intelligence would not permit it. You suspected the whole tradition was invention from beginning to end and here's the proof. Your annotations of the histories.
SHARDOVAN: Ah. Mere fancies, sir. Notes for a fiction I had a mind to write.
DOCTOR: Hmm. The fiction of Castrovalva. A civilisation evolving out of tribal warfare into an ideal community. It is a fiction, and the thing that confirms it
SHARDOVAN: Well, sir?
DOCTOR: Oh, I know it. It's on the tip. It's on the tip of my mind. The books are five hundred years old at least, but
SHARDOVAN: The books are old, but they chronicle the rise of Castrovalva up to the present day.

More, that we do not hear or see, obviously follows as by the time we next see them Shardovan understands what is going on:

DOCTOR: Don't tell me you're lost, too?
SHARDOVAN: No, but as you guessed, Doctor, we people of Castrovalva are too much part of this thing you call the occlusion.
DOCTOR: But you do see it? The spatial anomaly.
SHARDOVAN: With my eyes, no. But in my philosophy. This way. I know a back way.

Great lengths were gone to to hide the villain's identity Anthony Ainley being credited as Neil Toynay while playing The Portreeve in episode 3. There's more of these to come. 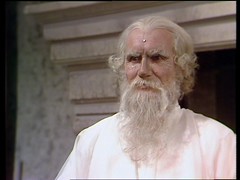 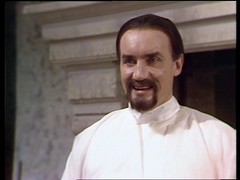 The Master's Tardis also stands revealed, as the Fireplace in the Portreeve's room: 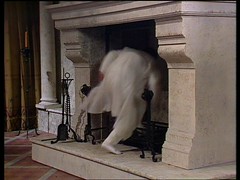 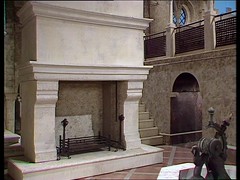 It's quite fun watching The Master totally loose his rag with the Zero Cabinet, shooting it with the Tissue Compression Eliminator and then when that doesn't work slinging it on the floor, which reveals all it contains is The Complete History of Castrovalva! 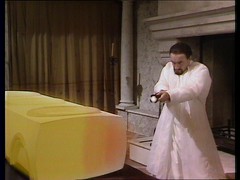 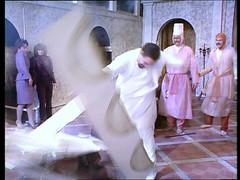 MERGRAVE: Doctor?
RUTHER: This is beyond all sense.
MERGRAVE: You must come along with us.
SHARDOVAN: No. You must spare the Doctor.
RUTHER: No, Shardovan. He has betrayed the Portreeve.
SHARDOVAN: My dear friends, it's we who've been betrayed.
DOCTOR: Listen carefully. This man you know as Portreeve is the most evil force in the universe. You have got to help me defeat him. Got to, do you understand?
SHARDOVAN: You do have doubts. We've spoken of it often.
DOCTOR: Well, say something, please!
SHARDOVAN: Shush.
DOCTOR: Yes would be best.

DOCTOR: So that's how you're sustaining Castrovalva.
MASTER: My own adaptation of the block transfer computation. Since we last me, Adric's mathematical powers have been put to lively use.
DOCTOR: Deadly, you mean.
MASTER: That, too. You were wise to deter your young friends from approaching. The hadron power lines are lethal to the touch.
DOCTOR: All right, Master. It's me you want. Let the boy go.
MASTER: Yes, a trap has now been sprung. We can begin to dispose of all the bait.

One of the things which stuck in my head about Castrovalva when I was younger was the deaths of it's inhabitants. First up is Ruther: He just vanishes at the Master's command. 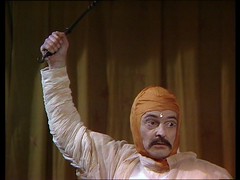 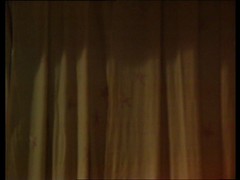 Then Shardovan perishes, swinging by Chandelier into the Hadron Power Lines surrounding Adric. 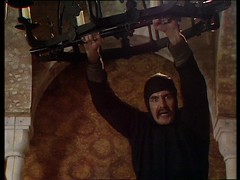 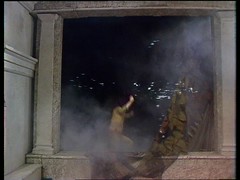 During this sequence Shardovan actor Derek Waring is doubled by stuntman Ken Barker who returns as a Stuntman/Cyberman in Attack of the Cybermen, the Mutant in Revelation of the Daleks and a Stuntman in Battlefield.

Finally Mergrave perishes in the closing moments, having left the escaping Doctor & companions returning back down the tunnel to obstruct The Master's escape. 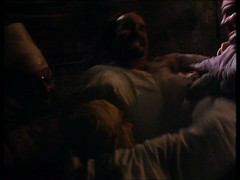 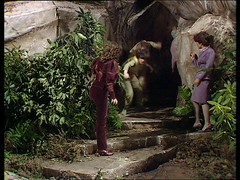 The Master, trapped by a mob of Castrovalva's citizen's and seemingly dying there was another image that stayed with me.

And with the technology that sustained it gone, so is Castrovalva and the cliff that had a castle on it earlier in the story now is empty: 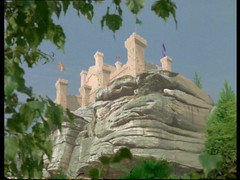 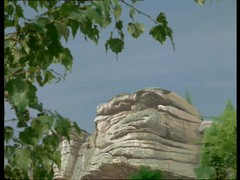 Structurally Castrovalva is a good story, populate the first two episodes with familiar(ish) elements like the Tardis, Companions & the Master, with the Doctor coming to the fore later (and in that respect bares some resemblance to The Christmas Invasion). It gives the still newish companions of Nyssa & Tegan some screen time, but (and a down mark now) in the process sidelines Adric and sows the seeds of doubt that he's a bit of a spare part. Some of the concepts here are a little beyond the average television viewer, a complaint we'll return to several times in the next few years, but unlike some other stories Castrovalva doesn't loose sight of the need to tell a decent adventure story.

Castrovalva was novelised in 1983 by the story's author and released the month after the preceding story, Logopolis.

It was released on video in March 1992 alongside Logopolis and I can clearly remember buying both from the WHSmiths in Staines, near to where I was at University.