564 Four to Doomsday: Part One

"His Majesty commands me to tell you that we arrive on planet Earth in four days."

The Tardis arrives in a seemingly empty spaceship where they are observed by the sphere like Monoptican cameras. Exploring the ship, the Doctor and his friends meet Monarch, the frog like ruler of Urbanka, who is journeying to Earth, and his assistants Enlightenment & Persuasion. They take an interest in Tegan who draws for them the latest human fashion. They are taken to a room for rest & refreshment where they meet Bigon, an ancient Athenian, Kurkutji, an Australian Aborigine, the Chinese Lin Futu and the Mayan Villagra. Monarch attempts to gain access to the Tardis. The time travellers are met by two more figures who tell them that there is four days to go before they reach Earth and invite the Doctor & his friends to complete their journey with them. They introduce themselves as Enlightenment & Persuasion.....

What I remember most about seeing this episode on first transmission was the floating Monopticons that Monarch is using to observe the intruders on his ship with. 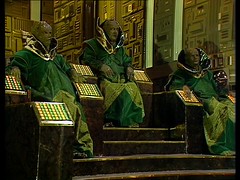 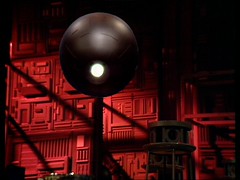 As a child my local department store, Bentalls in Kingston Upon Thames, had one of these big black spheres, with camera lenses sticking out of it, hanging in their toy department which I was ever so scared of. The Monopticons reminded me of this and thus the fear was transmitted to them. 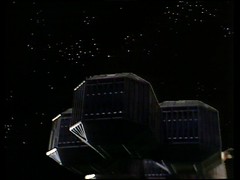 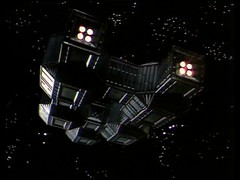 The title of the story, Four to Doomsday, seems a bit tangential to what's going on and is probably inspired by the remaining length of the ship's journey to Earth announced at the end of the episode. The story's title insinuates it might not be good news for Earth when they get there!

ENLIGHTENMENT: His Majesty commands me to tell you that we arrive on planet Earth in four days. He invites you to complete your journey as his guests.
DOCTOR: Well, that's very civil of His Majesty. Who are you?
PERSUASION: We've already met. This is Enlightenment, and I am Persuasion.

This is Doctor Who, we're used to the Doctor and other Time Lords changing appearance, very used to it with a regeneration being fresh in the mind. Even so it's still quite a shock when two of the aliens show up at the end of the episode wearing clothes and bodies that are exact copies of a sketch Tegan made! 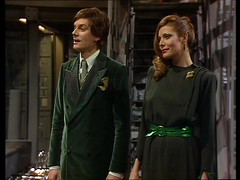 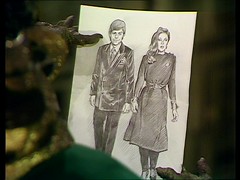 Much fuss is made in publications elsewhere of how Tegan is suddenly able to speak an obscure Aboriginal dialect. 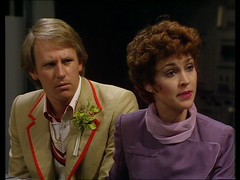 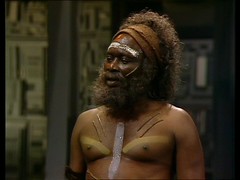 What should be more worrying is why the others *can't*: doesn't the Tardis provide a translation gift for those who travel in it, as established in Masque of Mandragora? They all understand the Athenian Bigon & Chinese Lin Futu OK, not to mention the three alien Urbankans! 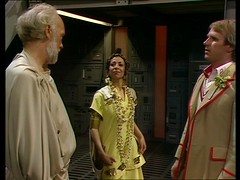 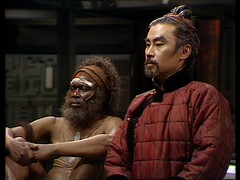 Playing Monarch is Stratford Johns, an actor well known for role as Inspector Barlow in Z-Cars which he reprised in Softly, Softly and several spin offs from that. He'd been in I, Claudius as Piso in Some Justice an had recently appeared in Blake's 7 season 4 as Belkov in Games. He can be seen in Neverwhere as Mr. Stockton in Earl's Court to Islington. 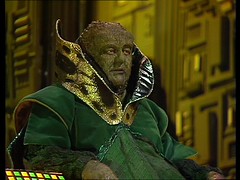 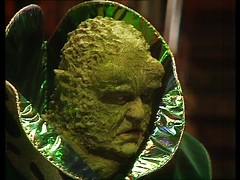 Paul Shelley, playing Persuasion, has a long television career to his name including an appearance in Blake's 7: Countdown as Major Provine. In Inspector Morse: The Sins of the Fathers he plays Stephen Radford. He's the brother of Francis Matthews, the voice of Captain Scarlet. You can hear Paul Shelly interviewed in Toby Hadoke Who's Round 38. 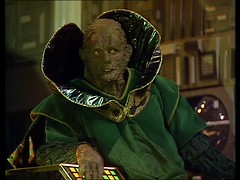 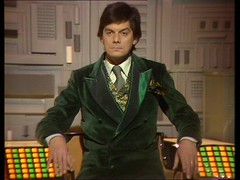 Annie Lambert, here playing Enlightenment, has also had a long career in television which includes a recurring role in Space 1999: the Space 1999 Catacobs website believe her character is called Julie and that she can be seen in Collision Course, Death's Other Dominion & Full Circle during Season One plus Rules Of Luton, Mark Of Archanon, Brian The Brain and New Adam New Eve in Season Two. You can also see her in The Sweeney as the Air Hostess in Selected Target, the first televised Inspector Morse story, The Dead of Jericho, as Adele Richards and Agatha Christie's Poirot: Triangle at Rhodes as Valentine Chantry. 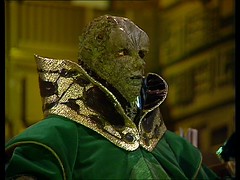 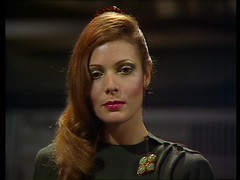 Four to Doomsday is the first story of this season, and thus the first story of the fifth Doctor to be filmed. A story called Project Zeta Sigma had been commissioned from the writers of Meglos, John Flanagan and Andrew McCulloch, but had fallen through. Peter Davison's opening story was then shifted to be filmed later, once previous script editor Christopher H. Bidmead had been pressed into service to write a script, while stories that had been written were filmed first.

This, then, is the timeline for the making of the nineteenth season:

* Actually Eric Saward but credited as Antony Root due to Saward writing the story! The broadcast order is however:

The difference in shooting and broadcast order helps to explain why the Script Editor credit changes so frequently this season!

Four to Doomsday was the first script for the series by Terence Dudley, a former BBC producer on both Doomwatch, created by Gerry Davis & Kit Pedler of Cybermen fame and Survivors, created by Terry Nation's (and I think we know by now what he came up with!) He directed Meglos the previous season and shortly after this story was finished would write K-9 & Company, which was screened 3 weeks prior to the first episode of this story being aired.

Four to Doomsday is the first story script edited by Antony Root. He'd previously worked as an Assistant Floor Manager on Destiny of the Daleks. Officially the program credits him as script editing 3 stories, plus a part share in K-9 and Company. Unofficially it would appear as if his credit on the third story is a dodge to get round it being written by his successor as script editor Eric Saward .... who gets credited as script editor on screen before Root does due to the odd order this season is made in. Root has since gone on to be a highly successful television producer.