"Ah. You've come to help me find the Zero Room. Welcome aboard. I'm the Doctor. Or will be if this regeneration works out!"

While escaping with the newly regenerated & confused Doctor, Adric is captured by security guards and only freed by the arrival of the Master's Tardis. Adric sets the Doctor's Tardis in flight, following him into the depths of the vessel where the Doctor is seeking the Zero room to rest & recuperate in. He finds the Doctor, but vanishes. Nyssa & Tegan guide the Doctor to the Zero Room where he regains some strength but on her way back to the console room Nyssa notices the Tardis is getting hotter. Tegan sees an image of a captive Adric warning them of the Master's trap. Nyssa discovers the Tardis has been set on a course for the hydrogen inrush: event one: the Tardis is heading for destruction in the biggest explosion in history.

Welcome to the start of the Fifth Doctor's adventures!

This first episode rolls along nicely from "can the Doctor & his companions escape the security guards" through "can the Doctor find the Zero Room" to "why is the Tardis getting hotter and where is it going?". It doesn't allow a lot of time to stop & think but symbolically shows that this is something a little different by shedding the fourth Doctor's clothes and unravelling his trademark scarf. 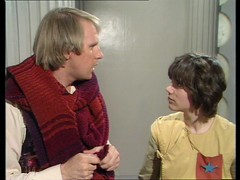 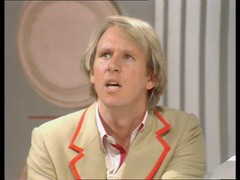 The new Doctor Who is played by the then thirty year old Peter Davison, at that point the youngest actor to play the Doctor. He'd come to fame playing vet Tristan Farnham in All Creatures Great & Small, which producer John Nathan-Turner had worked on, and when the time came to recast the role of the Doctor Nathan-Turner remembered him.

The episode follows the pattern set by Spearhead from Space & Robot by showing the Doctor somewhat confused. He's forgetful:

DOCTOR: Romana's always telling me I need a holiday.
ADRIC: But Romana's gone, Doctor.
DOCTOR: Gone? Really? Did she leave a note?
ADRIC: We said goodbye to her at the gateway. Don't you remember?
DOCTOR: Well, if we did, we did.

DOCTOR: I left a waistcoat like that on. Ever been to Alzarius?
ADRIC: I was born there, Doctor.
DOCTOR: Really? It's a small universe, isn't it.

DOCTOR: I wonder, boy, what would you do if you were me, hmmm? Or perhaps I should ask, what would I do if I were me.

DOCTOR: Not far now, Brigadier, if the Ice Warriors don't get there first. Oh no. Oh dear. We've wandered into the wrong corridor. We must be close to the main Tardis drive now. Jamie. Jamie, you go back.
ADRIC: No. I have to stay with you, Doctor.
DOCTOR: No, nonsense, be sensible, go back! When I say run, run! Don't you understand? The regeneration is failing.

But t reassure viewers the story places him in a familiar setting. In Spearhead from Space & Robot it was with UNIT, here it's with his companions in the Tardis, and we get a good explore of the interior. 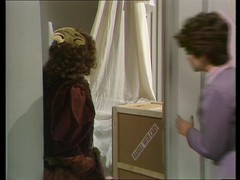 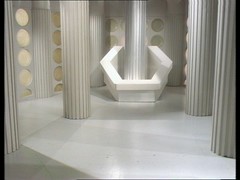 I can't recall if I read Invasion of Time before or after I saw Castrovalva for the first time, but in it's later sequences set in the Tardis lots of roundeled walls is what I was imagining, like what we see here.

You do have to question quite why The Doctor has a Cricket dressing room in the Tardis..... or is there another door in there opening out onto a cricket pitch? Anyway it's from here that he acquires his new costume, inspired by photo that John Nathan-Turner kept on his on his office wall of Davison at a charity cricket match. 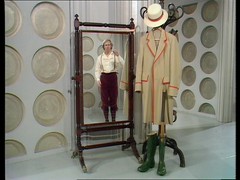 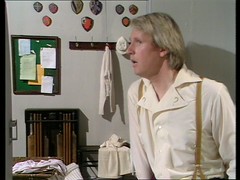 DOCTOR: Now, ordinary spaces, of course, show up on the architectural configuration indicators, but any good Zero Room is balanced to zero energy with respect to the world outside its four walls. Or however many walls it has. There was a very good polygonal Zero Room under the Junior Senate block on Gallifrey, widely acclaimed for it's healing properties. Romana's always telling me I need a holiday. 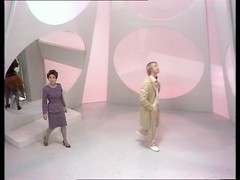 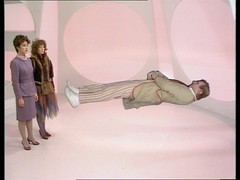 NYSSA: Doctor? What does the Zero Room look like?
DOCTOR: Zero Room? Oh, it's very big, empty, sort of grey. Pinkish-grey.
TEGAN: Come on, Doctor. Through this way.
DOCTOR: Thank you. You must be Tegan. Works even better if you close the doors, Nyssa.
TEGAN: It smells like roses.
DOCTOR: Yes. I've never quite understood why. It's quite peaceful, isn't it.
TEGAN: Peaceful. Doctor it's like
NYSSA: Like Traken used to be.
TEGAN: Will you have to stay here long?
DOCTOR: Oh, just until my dendrites heal. The nervous system's a very delicate network of logic junctions.
NYSSA: The synapses, yes.
DOCTOR: Oh, yes, I was forgetting, Nyssa, bioelectronics is your strong point. Yes, well, my tussle with the Master came at precisely the wrong moment. When the synapses are weak they're like radio receivers, picking up all sorts of jumbled signals.
TEGAN: I get it. The Zero Room cuts out all interference.
DOCTOR: Completely! Even the gravity's only local. Goodness me, I'm tired.
NYSSA: But there isn't even a bed.
DOCTOR: Bed? Oh, I don't need a bed. Not in the Zero Room.

Location filming for this episode took place at Crowborough Wireless station, a different location for the Pharos Project to the one used in Logopolis. This was so all the location work could be done in one locality and was dictated by the major location used in the next few episodes. 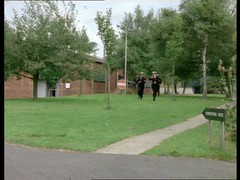 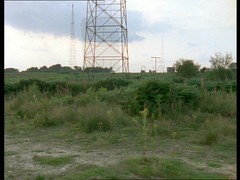 Playing the head of security at the project is Dallas Cavell who had previously been in several Doctor Who stories: he was the Road Works Overseer in The Reign of Terror, Bors in The Daleks' Master Plan, Trask in The Highlanders and James Quinlan in The Ambassadors of Death. 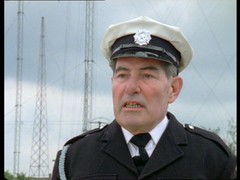 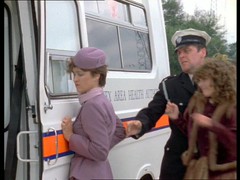 Meanwhile one of his security guards, the one seen manhandling Nyssa & Tegan, is a last Doctor Who role, uncredited as usual, for Harry 'aitch Fielder. His complete list of Doctor Who credits prior to this episode, stretching back to 1967, is a Central European Guard in The Enemy of the World, a Wheel Crewmember in The Wheel in Space, a Guard in Planet of the Spiders, a Vogan in Revenge of the Cybermen, a Guard in The Seeds of Doom for which he's credited in Part 4 , a Guard in The Deadly Assassin, a Second Assassin in The Face of Evil, a Titan Base Crewman in The Invisible Enemy, a Levithian Guard in The Ribos Operation, a Guard in The Armageddon Factor for which he gets another credit, a Krarg in Shada which he would have been credited on, a Tigellan in Meglos, and finally here as a Security Guard in Castrovalva.

He was also a regular extra in Blake's 7 appearing as an Armed Crewman in Space Fall & Cygnus Alpha, a Scavenger in Deliverance and a Federation Trooper in Weapon, Trial, Voice from the Past, Children of Auron, Games, Warlord & Blake.

The day after this episode aired he made his first appearance as the security guard on Thames Television's CBTV a job that would occupy him for the next few years and get his face known with many children of my age. There's a selection of clips on Harry's You Tube Channel. His website details his long career as a "supporting artist" in films & television and he's writen a fine book about his career.

The other Security Guard is Kenneth Lawrie making his Doctor Who debut. He'll return as a Crewmember & Duplication Body in Resurrection of the Daleks and a Guard in Revelation of the Daleks. 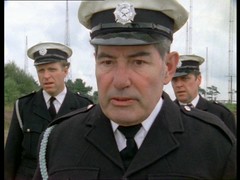 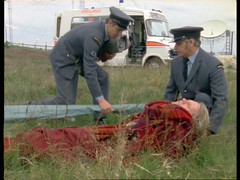 One of the Ambulancemen is another regular extra, Peter Roy. He was a Greek Soldier in The Myth Makers, an English Soldier in The Highlanders, an Airport Police Sergeant & Chauffeur in The Faceless Ones, a UNIT & Bunker Man in The Invasion, a Security Guard in The Seeds of Death, a Passenger/Plague Victim/Passersby/Ambulance Man/Policeman in Doctor Who and the Silurians, a Policeman in Mind of Evil, Technic Obarl in Hand of Fear, a Guard in The Face of Evil, a Guard in The Sun Makers, a Galifreyan Guard in The Invasion of Time, a Gracht Guard & one of Zadek's Guards in The Androids of Tara a Guard in The Armageddon Factor, a Skonnan Guard in Horns of the Nimon and a Policeman in Logopolis. He returns as a Man in the Cave Croud in Snakedance and a Van Driver in Resurrection of the Daleks. Like many extras at this time he has Blake's 7 form too appearing as a Citizen / Prisoner in The Way Back & Space Fall, an Alta Guard in Redemption, an Albian Rebel in Countdown and a Federation Trooper / Rebel in Rumours of Death. He was in Doomwatch as a man in Project Sahara and Flood. In the The Hitchhiker's Guide to the Galaxy he plays the Limousine Chauffeur in episode 2. He's got a notable role in the James Bond film Thunderball where he played British Secret Agent 006. He has a less obvious appearance in Return of the Jedi as Major Olander Brit but that hasn't stopped the character from getting a Wookipedia page! This, then, is the timeline for the making of the Nineteenth season:

* Actually Eric Saward but credited as Antony Root due to Saward writing the story! The broadcast order is however:

The difference in shooting and broadcast order helps to explain why the Script Editor credit changes so frequently this season!