410 Pyramids of Mars: Part One

"I bring Sutekh's gift of death to all humanity!" 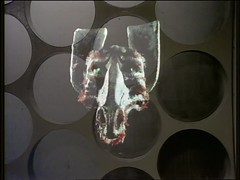 In Egypt, Professor Marcus Scarman penetrates a tomb and after finding the mark of the eye of Horus is blasted with energy. After Sarah sees a psychic projection of a monstrous head inside the console room, The Tardis materialises in UNIT HQ's location but in 1911, the site of the priory that burnt down before the present building was constructed. They find a storeroom at the house filled with Egyptian artefacts. The house belongs to Professor Scarman and his old friend Doctor Warlock comes and confronts Namin, the Egyptian who has been living there supposedly on the orders of Professor Scarman. The Butler is murdered by an unseen assailant and when Warlock threatens to call the police Namin shoots him but is overpowered by the Doctor. He & Sarah rescue the injured Warlock and flee into the grounds. Warlock directs Sarah to the hunting lodge, where Scarman's brother Lawrence lives. While fetching him Sarah encounters a mummy walking through the woods. Namin searches for the Doctor & Warlock but is summoned back to the house. At the hunting lodge Warlock's wounds are treated and the Doctor intercepts a signal from Mars saying Beware Sutekh. Leaving the lodge and returning to the house they see a black robed figure emerge from a vortex within a sarcophagus and slay Namin.

NAMIN: All high, all powerful, most noble Lord, thy humble servant welcomes thee. Master, at last you are here. I, Ibrahim Namin, and all my forebears have served you faithfully through the thousands of years that you have slept. We have guarded the secret of your tomb. ALIEN: Stand. Look upon my face.
NAMIN: Great One, Lord Sutekh, I dare not.
ALIEN: Look. Is this the face of Sutekh?
NAMIN: Master, spare me. Spare me. I am a true servant of the great Sutekh.
ALIEN: I am the servant of Sutekh. He needs no other. Die. I bring Sutekh's gift of death to all humanity! 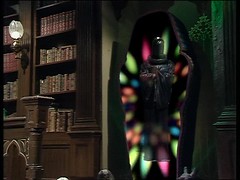 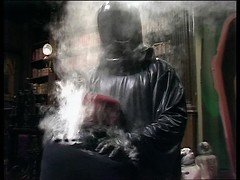 A decent episode, with a fair bit of mystery built into it - what's happened to Professor Scarman and what was the face in the Tardis? - that isn't answered by the end.

This story Doctor Who has a go at plundering every Mummy film ever made, and there's been a fair few. There's something inherently frightening about Mummys lumbering round the place so it's possibly a surprise Doctor Who hasn't done something with them before now, although Tomb of the Cybermen takes a certain amount of inspiration from the idea. We've visited an Egyptian tomb before though in episodes nine and ten of The Dalek Masterplan but it was under construction at the time rather than been plundered for treasures like in most Mummy films.

The only raiding of ancient artefacts Sarah is doing involves the Tardis Wardrobe: 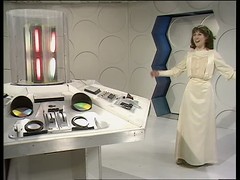 SARAH: Hey, Doctor. Doctor, look what I've found.
DOCTOR: Hello, Vicky.
SARAH: What?
DOCTOR: Hmm? Where did you get that dress?
SARAH: I just told you. I found it back there in the wardrobe. Why, don't you like it?
DOCTOR: Yes. Yes, I always did. Victoria wore it. She travelled with me for a time.
SARAH: Well, as long as Albert didn't wear it.

It's a good job then that the Tardis then lands somewhere & when the dress doesn't look out of place!

SARAH:Oh, come on, Doctor. That's worth a smile, surely? What's the matter? You should be glad to be going home.
DOCTOR: The Earth isn't my home, Sarah. I'm a Time Lord.
SARAH: I know you're a Time Lord.
DOCTOR: You don't understand the implications. I'm not a human being. I walk in eternity.
SARAH: What's that supposed to mean?
DOCTOR: It means I've lived for something like seven hundred and fifty years.
SARAH: Oh, you'll soon be middle aged.
DOCTOR: Yes! About time I found something better to do than run around after the Brigadier.
SARAH: Oh, come on. If you're tired of being UNIT's scientific advisor, you can always resign.

A sombre nod to the Third Doctor's position which the Fourth somewhat moves away from as UNIT are removed somewhat over the course of this series. Of course if the original plan for this story to open the 13th season had gone ahead it would have carried on from the Doctor's last encounter with UNIT in Terror of the Zygons.

DOCTOR: We've materialised at the correct point in space, but obviously not in time. A temporal reverse? Some vast impulse of energy has drawn the Tardis off course.
SARAH: You're saying this in UNIT HQ, but years before I knew it?
DOCTOR: Yes.
SARAH: But it's so different. It can't be the same house.
DOCTOR: It must be the old priory. The UNIT house was built on the site.
SARAH: The old priory was burnt down, wasn't it?


UNIT has seemed to have had a settled headquarters the last few years with the exteriors, when first seen in The three Doctors, showing a country house. Since then we've only seen interiors but they've been pretty much the same in the subsequent appearances in The Green Death, Planet of the Spiders, Robot & Terror of the Zygons. The UNIT HQ location will reappear many years later in The Five Doctors.

This is the first time that anyone's mentioned it being a relatively modern 20th century construction. Nowadays a fact like it having been built on the site of a building that burnt down would have been slipped into a story somewhat previously. Of course mentioning it now gives us a good idea of where the story is going as Chekov's Gun strikes again.

DOCTOR: Of course, it would make an ideal headquarters for some paramilitary organisation. This room could easily be turned into a laboratory. Oh, hello.


Is the Doctor actually standing where his lab would be years later? Or just spouting nonsense to bluff his way past the butler?

We then get yet more name dropping from the Doctor:

DOCTOR: Why bother to lock an internal door?
SARAH: Maybe this wing of the house isn't in use. It smells musty enough.
DOCTOR: That isn't all must, Sarah. Some of it's mummy. French picklock. Never fails. Belonged to Marie Antoinette. Charming lady. Lost her head, poor thing.


What would a French aristocrat be doing with a picklock? Is the Doctor spinning another tall tale?

We've seen the Doctor visit France in The Massacre and The Reign of Terror. We know he met Napoleon Bonaparte from an anecdote in Day of the Daleks and since he didn't in either of those stories that's a third trip. Marie Antoinette's dates, 2 November 1755 – 16 October 1793, overlap with Napoleon's, 15 August 1769 – 5 May 1821, so it's possible he met her, or acquired her picklock on the same trip he met Napoleon! The majority of the story's cast are in this episode (with several not progressing much further!) and most of them have other Doctor Who credits to their names. Peter Mayock, here playing Ibrahim Namin, returns in The Deadly Assassin as as Solis. When the DVD producers attempted to trace him to part in the commentary for this story it was discovered he'd died in 1998 but news of his passing hadn't reached the wider Doctor who and acting communities. 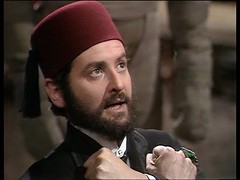 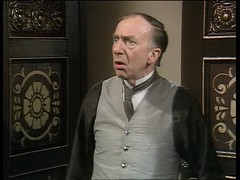 Also is The Deadly Assasin, as a Timelord, is Michael Bilton who here plays Collins, the Butler. He's previously appeared as Charles de Teligny in Priest of Death & Bell of Doom, the third and fourth episode of the Massacre, the Doctor who debut for this story's director Paddy Russell. Bilton has also got an appearance in The Prisoner to his name playing the M.C. Councillor in It's Your Funeral. 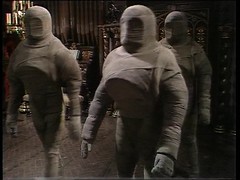 One of the mummies is Melvyn Bedford who was Reig in Planet of Evil, the previously shown story that was filmed after Pyramids of Mars. One of the other Mummies, Nick Burnell was in The Tripods as a Black Guard in episode 5 of the first series.

Others in the cast with genre connections include Peter Copley who plays Dr Warlock. He has not one but THREE Out of the Unknown appearances to his name appearing in the first series episode Stranger in the Family as Charles Wilson, the third series episode Immortality Inc as Hull and the fourth series episode Taste of Evil as Mackinlay. Sadly only his first appearance survived to be seen on the recent DVD release. He also has an appearance in the opening episode Terry Nation's 1975 series Survivors, The Fourth Horseman, as Dr. Bronson. This is somewhat amusing given who else is in the cast as we'll see next week. 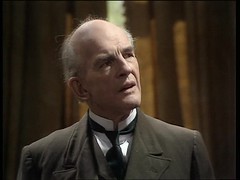 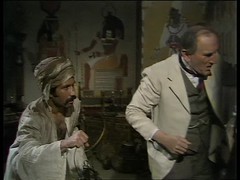 Ahmed, who we briefly saw at the beginning of the episode, is played by Vik Tablian who was Barranca and Monkey Man in Raiders of the Lost Ark.

The name attached to the writing of this story is Stephen Harris, a pseudonym. The initial draft, involving the British Museum which is perhaps a more obvious setting for mummies, was written by experienced writer Lewis Griefer, who wrote The Prisoner episode The General. However problems with the story straying too far from the original concept arose, then Griefer was taken ill and finally left England for a teaching position in Israel he'd previously committed to, all of which necessitated a major rewrite from script editor Robert Holmes.