"Sutekh is breaking free from his ancient bonds. If he succeeds, he'll destroy the whole world!"

The servant is revealed as the missing Marcus Scarman who gives the Mummies generator coils, shaped like Canopic Jars, which he orders placed at the compass points to contain the estate in a deflection barrier. The Doctor is injured interfering with the vortex inside the mummy case and is hidden in the priest hole by Sarah & Lawrence. The local poacher encounters the deflection barrier and, visiting the hunting lodge to seek help, sees Scarman use a Mummy to murder Warlock. The poacher attempts to kill Scarman who dispatches the Mummies to kill him. The recovered Doctor, Sarah & Lawrence see the Mummies removing advanced equipment from the room of Egyptian antiquities which the Doctor deduces they are using to build a rocket to release Sutekh from his imprisonment on Mars. They take shelter in the Tardis and Sarah asks to return to her own time. The Doctor takes her there and shows her the devastation that will occur if they don't stop Sutekh. They return to 1911 as Scarman confers with Sutekh via a mummy. Lawrence attempts to stop the Mummies from killing the poacher but it merely attracts their attention as they storm into the cottage. 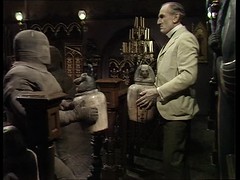 Having overheard a name while watching Marcus' arrival The Doctor is now able to figure out what's going on as he explains to his friends as they watch the Mummies leave carrying Canopic Jars:

SARAH: Where have they gone?
DOCTOR: To set up a deflection field around the house. He's obviously planned every step.
LAURENCE: Who, Marcus?
DOCTOR: No, Sutekh.

DOCTOR: Sutekh is breaking free from his ancient bonds. If he succeeds, he'll destroy the whole world.
SARAH: You mean Sutekh is still alive?
DOCTOR: He destroyed his own planet, Phaester Osiris, and left a trail of havoc across half the galaxy. Horus and the rest of the Osirans must have finally cornered him on Earth.
SARAH: In Egypt?
DOCTOR: The wars of the gods entered into mythology. The whole of Egyptian culture is founded upon the Osiran pattern.

The idea here is taken from Chariots of the Gods? by Erich von Däniken, a popular book at the time, that posited that aliens had influenced human development. Doctor Who has used this theme before in The Daemons & Death to the Daleks and will return to it several times most notable in City of Death.

DOCTOR: Ah! Found it.
SARAH: What?
DOCTOR: The lodestone that drew the Tardis off course.
LAURENCE: That's not a lodestone, that's just a sarcophagus.
DOCTOR: No, it isn't. It's the entrance to a time-space tunnel.
SARAH: Leading where?
DOCTOR: To Sutekh.

They then find some very odd equipment in the house 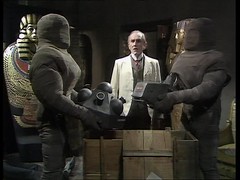 DOCTOR: That's resonating tuner. Part of an anti-gravity drive. Oh! They must be building a rocket.
SARAH: Egyptian mummies building rockets? That's crazy.
DOCTOR: They're not mummies, they're service robots.
SARAH: Huh?
DOCTOR: Machines.
SARAH: Machines? All right then, why are machines building rockets?
DOCTOR: So that Sutekh can escape from the power of Horus.
SARAH: Where's Sutekh now?
DOCTOR: Exactly where Horus left him seven thousand years ago. Trapped beneath a pyramid and powerless to move.

which then leads to an explanation of what's going on

SARAH: If Sutekh is so totally evil, why didn't Horus and the other Osirans destroy him?
DOCTOR: It's against their code. To have killed him would have meant that they were no better than he, so they simply imprisoned him.
SARAH: How?
DOCTOR: A forcefield, controlled from a power source on Mars.
LAURENCE: Mars?
DOCTOR: Yes. That's where the signal was beamed from, remember?
LAURENCE: But how?
DOCTOR: When your brother stumbled into Sutekh's tomb, the monitoring system on Mars detected the fact and triggered off an alarm signal.
SARAH: The rocket those robots are building!
DOCTOR: Yes. Will be aimed at the power source on Mars. If those warheads reach their target, Sutekh will have released himself.
LAURENCE: To destroy the world.
DOCTOR: Not only this world. Anywhere that life is found.

The common thread through here is that the Doctor is very familiar with the story of Sutekh. Did the Time Lords play a part in the conflict between him and the other Osirans?

The only problem with trying to stop Sutekh is that he's controlling Marcus Scarman and his brother Lawrence still hopes to get him back, even after finding out he's had Doctor warlock killed:

LAURENCE: I can't believe that my brother. He and Doctor Warlock were the closest of friends.
DOCTOR: Well, if you can stop thinking of him as your brother it'll make it a great deal easier for you.
LAURENCE: But he is my brother!
DOCTOR: From the moment he entered Sutekh's tomb he became subject to Sutekh's will.
LAURENCE: What does that mean?
DOCTOR: As a human being, Marcus Scarman no longer exists. He is simply the embodiment of Sutekh's power. He's given the paralysed Sutekh arms and legs, a means to escape.

Unfortunately he learns of what will happen if the Doctor's plan succeeds:

DOCTOR: If I can block the mental beam, Scarman will collapse.
SARAH: You mean die?
DOCTOR: Well, he's not alive now in any real sense. Only Sutekh animates him. Deprived of his outside contact, Sutekh'll be as powerless as the day Horus left him.


The effects of which we see at the end of the episode.

The thing this episode is famed for is the trip to 1980 where the Doctor shows Sarah what her time will look like.

SARAH: Well now we are here, why don't you tune up 1980 and we can, well, leave.
DOCTOR: I can't.
SARAH: Ah. Why can't you?
DOCTOR: Because if Sutekh isn't stopped, he'll destroy the world.
SARAH: But he didn't, did he. I mean, we know the world didn't end in 1911.
DOCTOR: Do we?
SARAH: Yes, of course we do!
DOCTOR: All right. If we leave now, let's see what the world will look like in 1980.
LAURENCE: I say, this is like something by that novelist chap, Mister Wells. 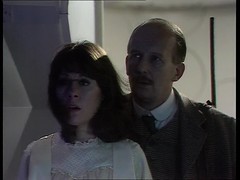 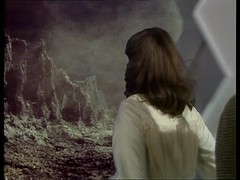 DOCTOR: 1980, Sarah, if you want to get off.
SARAH: It's a trick!
DOCTOR: No. That's the world as Sutekh would leave it. A desolate planet circling a dead sun.
SARAH: It can't be! I'm from 1980.
DOCTOR: Every point in time has its alternative, Sarah. You've looked into alternative time.
LAURENCE: Fascinating. Do you mean the future can be chosen, Doctor?
DOCTOR: Not chosen, shaped. The actions of the present fashion the future.
LAURENCE: So a man can change the course of history?
DOCTOR: To a small extent. It takes a being of Sutekh's almost limitless power to destroy the future. Well?
SARAH: We've got to go back.
DOCTOR: Yes.

It also rather annoyingly conclusively dates Sarah from 1980 when we'd like her to be actually from the 1975 when this story was broadcast. If she is from 1980, and her Earth bound adventures with the Doctor are set then, then how is the Brigadier still serving with UNIT when Mawdryn Undead shows him retired and teaching by 1977?

Solution: Sarah is originally from 1975. After travelling with the Third and Fourth Doctor, The Doctor has taken her back to 1975 sometime between Terror of the Zygons & Pyramids of Mars but comes back for her again in 1980. That'd create a neat little gap in their adventures to allow the Doctor to pop off somewhere by himself which, as we shall see in Face of Evil, would be useful.

This episode has one of my favourite effects ever: The glow in the stripes round the face on the sarcophagus as Scarman talks to Sutekh. It's simple, but it works. 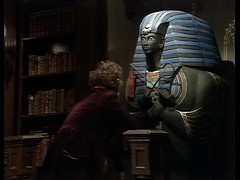 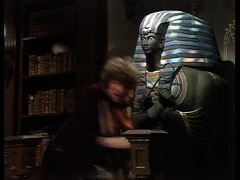 The most prominent actor in the guest cast our old friend Michael Sheard, as Laurence Scarman. He was previously in The Ark as Rhos and The Mind of Evil as Dr. Summers . He'll be back in The Invisible Enemy as Lowe, Castrovalva as Mergrave and Remembrance of the Daleks as the Headmaster. also on his CV are roles in Look and Read: Cloud Burst: Part 1 - Out of Control as Number Two, The Sweeney: Hit and Run as Mr. Penketh, Space: 1999 as Dr. Darwin King in the superb Dragon's Domain, The Professionals:When the Heat Cools Off as Merton, Blake's 7:Powerplay as Klegg, The Empire Strikes Back as Admiral Ozzel and two appearances in the in the Indiana Jones series in Raiders of the Lost Ark as the uncredited U-Boat Captain and Indiana Jones and the Last Crusade as Adolf Hitler, a role he played a number of time. His most famous role is as Mr. Bronson Grange Hill. 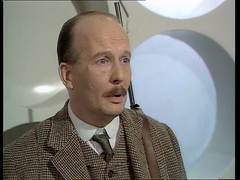 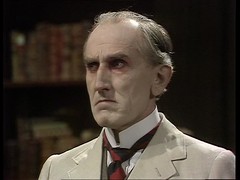 The other Scarman brother, Marcus, is played by Bernard Archard previously the villainous Bragen in The Power of the Daleks. He also has an Out of the Unknown to his name appearing in the missing season 2 episode Frankenstein Mark 2 as Dr. Giddy and the cult fantasy film Krull as Eirig.

The Poacher seen in this episode, Ernie Clements, is played by George Tovey who was the father of Roberta Tovey who played Susan in the two Peter Cushing Doctor Who films. Despite a long career in television this, and an appearance in Adam Adamant Lives!: Allah Is Not Always with You as a Taxi Driver seem to be Tovey Sr's only brushes with the sci fi and fantasy genre. 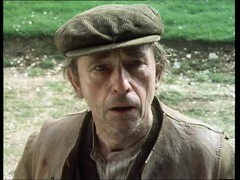 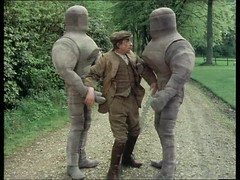 Clements' death, crushed between two Mummies, is particularly unpleasant and over the top leaving a sour taste which doesn't really go away for the rest of the story.