"If Sutekh succeeds in freeing himself, the consequences will be incalculable!"

Sarah immobilises the mummy with the control ring they took from Namin. The Doctor & Sarah find the missile that the Mummies are building. Lawrence suggests the use the poacher's store of blasting gelignite to destroy the missile. The Doctor deactivates one of the generator loops to allow them to get to the poacher's hut. Sutekh detects their interference. Lawrence finishes stripping one of the mummy robots for the Doctor when he is found and killed by his brother. The Doctor & Sarah return and discover his body. The Doctor disguises himself as a mummy to get close to the missile to place the explosives which he intends Sarah to shoot with Lawrence's rifle. Sutekh sends Scarman the coordinates for the missile which he installs in the missile. Sarah detonates the explosives but Sutekh contains the explosion. The Doctor goes to confront Sutekh to distract him so that the explosives power is unleashed and is transported through the vortex to Sutekh's tomb, where the distraction allows the explosion to occur but the Doctor is captured by Sutekh. 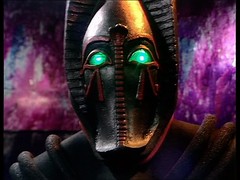 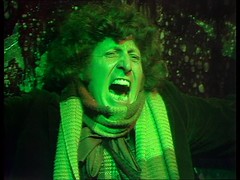 Hmmm, this has started to plod a bit.

Yes there's a few witty one liners between The Doctor & Sarah, first as they try to shut down the barrier:

DOCTOR: No obvious booby traps. Are you going to help or are you just going to stand there and admire the scenery?
SARAH: Your shoes need repairing. I actually wasn't admiring the scenery. I was waiting for you to tell me what to do.
DOCTOR: Just hold the base. I don't want it to fall.
SARAH: Dangerous?
DOCTOR: Very dangerous.
(Sarah supports the base of the jar as the Doctor cranks up the screwdriver. There is a loud noise and he backs off.)
DOCTOR: Deactivating a generator loop without the correct key is like repairing a watch with a hammer and chisel. One false move and you'll never know the time again.
SARAH: Any more comforting thoughts?
DOCTOR: Yes. Just let me know if it starts to get warm.
SARAH: Don't worry. You'll hear me breaking the sound barrier.

Then as they raid the poacher's hut for explosives:

DOCTOR: I wouldn't do that, if I were you. Could be a ferret.
SARAH: Argh!
SARAH: This looks like it.
DOCTOR: Ah!
SARAH: What's the matter? Not enough?
DOCTOR: Sweaty gelignite is highly unstable. One good sneeze could set it off.
(He carefully puts the box on the floor.)
SARAH: Sorry.
DOCTOR: No sign of any detonators or fuses?
SARAH: No, no, nothing else. Perhaps he sneezed?

But apart from that it's just dark and nasty.

SCARMAN: Master, I do not understand how this can be.
SUTEKH: The barrier to the east has been deactivated.
SCARMAN: But that is not possible.
SUTEKH: It has been deactivated. The power line has gone from my monitor.
SCARMAN: The humans do not have the knowledge to shut down the deflection barrier.
SUTEKH: It is clear that an extraterrestrial intelligence is operating.
SCARMAN: An alien?
SUTEKH: Oh, I have endured an eternity of darkness and impotence. I shall not be denied now. Listen to my orders.
SCARMAN: I hear you, Master.
SUTEKH: The missile must be guarded. Two servicers must maintain constant vigilance.
SCARMAN: It shall be as you say.
SUTEKH: Once the missile is projected, you will seek out and destroy my enemies. The alien who dares to intrude, the humans, animals, birds, fish, reptiles. All life is my enemy! All life shall perish under the reign of Sutekh the Destroyer!
SCARMAN: Only Sutekh shall live!

Oh no, not more missile building! We had that twice last season in Genesis of the Daleks and Revenge of the Cybermen! At least this one is a little different, following the Egyptian theme of the story by basically being a pyramid! 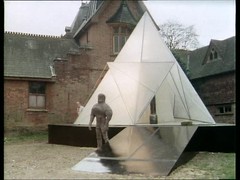 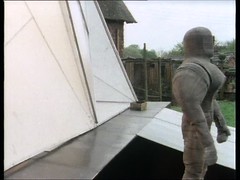 This works ok until you look at it closely and realise it's just a white tent on a metal frame!

At the start of the episode Lawrence hasn't taken on board what the Doctor has told him about his brother's fate.

DOCTOR: Are you all right?
LAURENCE: Yes, I think so.
DOCTOR: You don't deserve to be. You nearly got us all killed.
LAURENCE: I'm sorry.
DOCTOR: What's worse, you've probably wrecked what was my only chance of stopping Sutekh.
LAURENCE: Look, forgive me, Doctor. I was thinking of my brother.
DOCTOR: Listen! What's walking about out there is no longer your brother. It is simply an animated human cadaver. Animated by Sutekh. Do you understand? And if Sutekh succeeds in freeing himself, the consequences will be incalculable.

Blinded by belief he can redeem his brother it proves his undoing:

LAURENCE: Marcus! Marcus? Don't you know me? I'm your brother.
SCARMAN: Brother?
LAURENCE: Your brother, Laurence.
SCARMAN: As Horus was brother to Sutekh.


Completely the wrong thing to say to a being with brother issues!

LAURENCE: Marcus, you're ill. Let me help you. Trust me.
SCARMAN: Trust you?
LAURENCE: Look. You and I when we were boys.
SCARMAN: Laurence and Marcus.
LAURENCE: That's right. You do remember!
SCARMAN: I was Marcus.
LAURENCE: You still are. Now, let me help you.
SCARMAN: No! I am Sutekh!
LAURENCE: No, no. You went to Egypt and fell under some sort of mesmeric influence, that's all.
SCARMAN: Sutekh the great Destroyer. Sutekh, the Lord of Death. I am his instrument.
LAURENCE: Now that's all nonsense. You are Marcus Scarman, Professor of Archaeology, Fellow of All Souls, Member of the Royal Society.
SCARMAN: What do you know of Sutekh? Where are the others?
LAURENCE: Others?
SCARMAN: You are being helped. Sutekh has detected an alien intelligence amongst the humans here.
LAURENCE: Do you mean the Doctor?
SCARMAN: Doctor? 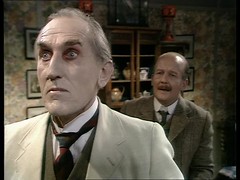 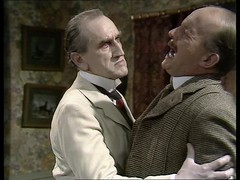 Another dark and nasty end for a character compounded by how he's then found by Sarah & the Doctor:

SARAH: Mister Scarman? Hey? Oh! Doctor.
DOCTOR: Strangled.
SARAH: The mummies.
DOCTOR: Not this time. There are marks. His late brother must have called.
SARAH: That's horrible! He was so concerned about his brother.

Sarah's disturbed by this and by the Doctor's response to the death:

DOCTOR: I told him not to be. I told him it was too late.
SARAH: Oh! Sometimes you don't seem
DOCTOR: Human? Typical Osiran simplicity.
SARAH: A man has just been murdered!
DOCTOR: Four men, Sarah. Five, if you include Professor Scarman himself, and they're merely the first of millions unless Sutekh is stopped. Know thine enemy. Admirable advice.

He very much has his eye on the larger picture of saving the Earth as he and Sarah know it. 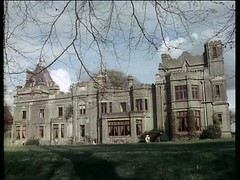 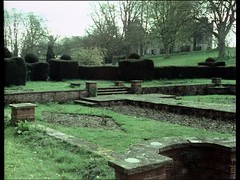 Pyramids of Mars was filmed as Star Grove Manor, which at the time was owned by Mick Jagger who used it as a recording venue for The Rolling Stones. It also appears in The Image of the Fendahl two years later. The Pyramids Of Mars DVD has a "now & then" feature on the location. 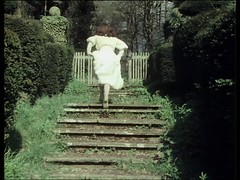 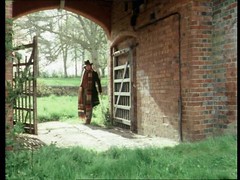 Finally seen in this episode is Gabriel Woolf as Sutekh. Many years later he returns as the Beast in The Impossible Planet and The Satan Pit. 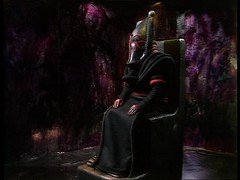 If you want to see what he actually looks like he appears in the Look & Read story The Boy from Space as Peep-peep's father alongside other Doctor who alumni Stephen Garlick, from Mawdryn Undead, as Dan, Sylvestra Le Touzel, from The Mind Robber, as Helen and John Woodnutt, from Spearhead from Space, Frontier in Space Terror of the Zygons & Keeper of Traken, as the Thin man The serial was released on DVD last year by the BFI and is well worth a purchase.

Directing this story is Paddy Russell, the first female Director to work on Doctor Who when she directed 1966's The Massacre. She had returned to Doctor Who for Invasion of the Dinosaurs and would later helm the recording of Horror of Fang Rock.