"I have won my freedom, Horus. Your curse is lifted. Now begins the reign of Sutekh the Destroyer. I shall crush this miserable world, and hurl it into the outermost depths of space. My vengeance starts here!"

Sutekh interrogates the Doctor learning he is a Time Lord. Scarman contacts Sutekh telling him Sarah has been captured. Sutekh sends the Tardis key to Scarman and instructs him to travel to the pyramid of Mars but the Doctor convinces him he is needed to operate the Tardis. The Sutekh controlled Doctor is returned to 1911 and takes Scarman, Sarah & a Mummy robot to Mars. Scarman orders the Mummy to kill the Doctor and then they both leave for the pyramid. However the Doctor has used his respiratory bypass system to survive. Sarah & the Doctor pursue Scarman through a number of traps. Scarman destroys the device restraining Sutekh and, his usefulness at an end, dies and disintegrates. Sarah & The Doctor race back to the Tardis and journey back to the priory. Sutekh stands for the first time in centuries and uses the vortex to journey to the priory but the Doctor traps him in the Vortex killing him. The Sarcophagus housing the vortex explodes, setting fire to the priory & destroying it.

Oh dear. Where do I start?

First Sutekh goes full on scheming bond villain on us. All he needs is a cat on his lap to stroke: 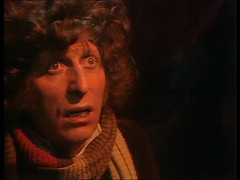 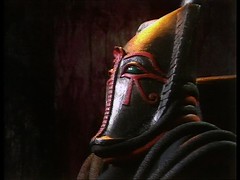 SUTEKH: No, you will not die yet. Identify yourself.
DOCTOR: Just destroy me, Sutekh. Nothing else now is left within your power.
SUTEKH: Identify yourself. It is within my power to choose the manner of your death. I can, if I choose, keep you alive for centuries, racked by the most excruciating pain. Since your interference has condemned me for ever to remain a prisoner in the Eye of Horus, it would be a fitting end. You would make an amusing diversion. Identify yourself, plaything of Sutekh.
DOCTOR: I'm a traveller.
SUTEKH: From where?
DOCTOR: Gallifrey, in the constellation of Kasterborus.
SUTEKH: Names mean nothing. What is the binary location from galactic zero centre?
DOCTOR: Ten zero eleven, zero zero by zero two.
SUTEKH: I know the planet. Data retrieval.
SUTEKH: So, you are a Time Lord.
DOCTOR: I renounced the society of the Time Lords. Now I'm simply a traveller.
SUTEKH: In time and space. In time and space?
DOCTOR: Yes! Yes!
SUTEKH: Ah. Approach closer. What are you called, Time Lord?
DOCTOR: Doctor.
SUTEKH: I offer you an alliance, Doctor. Serve me truly, and an empire can be yours.
DOCTOR: Serve you, Sutekh? Your name is abominated in every civilised world, whether that name be Set, Satan, Sodos
SUTEKH: Serve me, Doctor.
DOCTOR: Never! Argh!
SUTEKH: You pit your puny will against mine? Kneel!
DOCTOR: No!
SUTEKH: Kneel before the might of Sutekh. In my presence, you are an ant, a termite. Abase yourself, you grovelling insect.

Now I know it's traditional for Egyptian tombs to have booby traps prevented tomb raiders from looting them but the "penetrating the series of traps" is turning into a trope for the programme!

SUTEKH: Stand back and scan. Horus. Think you can confound Sutekh with these childish stratagems? The floor is charged with explosives. Count to the fifth row up. Extreme right solenoid. Press. 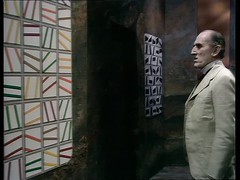 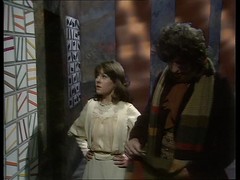 SARAH: It's like a Chinese puzzle.
DOCTOR: Yes. And there's a key.
SARAH: Oh, some key. Do you know what it means?
DOCTOR: Yes. Obviously the length of the lines provide a scale of measurement.
SARAH: It reminds me of City of the Exxilons.
DOCTOR: Don't touch anything.
SARAH: I wasn't going to.
DOCTOR: Well, don't. One false move and we could be blown to perdition. Feet and inches one side, metres and centimetres the other. Let's see.
DOCTOR: A hundred and twenty point three centimetres, multiplied by the binary figure ten zero zero. That's a hundred and sixty two point four centimetres, correct?
SARAH: Show-off.


So we spend half of this episode ripping off the last episode and a bit of Death to the Daleks. Sarah even makes reference to it reminding her of the Exillon city, which odd because she never went in it! You could see the Third Doctor having boasted about beating the puzzles afterwards though! They'll be a similar sequence next year in Hand of Fear too!

HORUS: Intruders, you face the twin guardians of Horus. One is programmed to deceive, the other points truly. The two switches control your fate. Instant freedom or instant death. Before you choose, you can ask one guardian one question. This is the riddle of the Osirans. Which is the guardian of life?
DOCTOR: Which indeed. They're both contra-programmed so that one will always give a false indication. One question. If I were to ask your fellow guardian the question, which switch would he indicate? 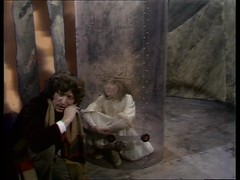 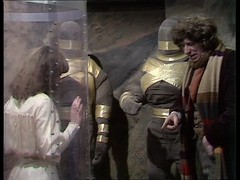 The episode feels a bit slow and ponderous for most of it's length almost as if the traps are padding out a script that is underunning, a distinct possibility given the circumstances in which it was re-written by Robert Holmes. It seems a shame because, as I said earlier, traps to stop you penetrating an Egyptian tomb are an established part of Mummy horror stories!

As we enter the closing moment of the journey Marcus Scarman's head seemingly transforms into what we saw in the Tardis in episode 1: 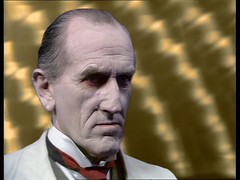 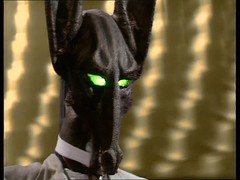 Sarah: Doctor! That's what I saw in the Tardis before we arrived at the priory!"

But no. Sarah will make up for this omission shortly.

With the power source destroyed Scarman is freed from Sutekh;s control and crumbles to dust. 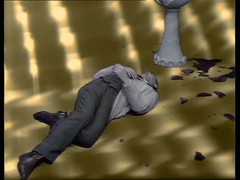 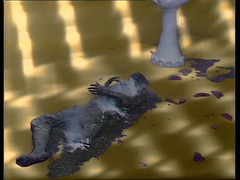 Unfortunately straight afterwards we get the famous appearance of the "hand of Sutekh" at 20:40 into the episode where a technician's hand can be seen helping actor Gabriel Woolf to stand/holding Sutekh's cushion in place! 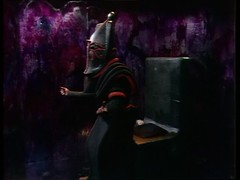 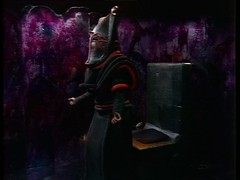 Once he stands Sutekh's head too becomes what we saw earlier: 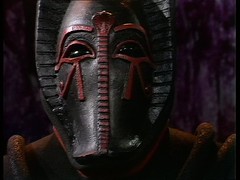 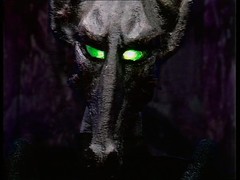 But by now we're at around the 21 minute mark of the episode so the ending is somewhat rushed with the Doctor & Sarah returning to Earth and attaching something to the Sarcophagus in the priory so that when Sutekh attempts to use it to escape, it goes bang. 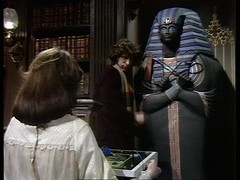 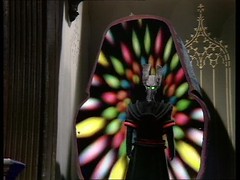 SARAH: Look, I know that's the time control from the Tardis, but what did you do?
DOCTOR: I moved the threshold of the time space tunnel into the far future. He could never have reached the end. After the Eye was broken, I realised that we had little more than two minutes to get back here.
SARAH: But how?
DOCTOR: The time radio waves take to pass from Mars to Earth.
SARAH: Ah. So the Eye of Horus was still holding Sutekh for two minutes after it was broken.


So the events of Sutekh rising from his throne are not contemporaneous with the those of the Doctor and Sarah leaving the Pyramid on Mars by the Tardis? That's a naughty bit of slight of hand on the storytelling front! Of course the Tardis is a time machine so there's no reason why, having left Mars, they couldn't go back in time to just after the Tardis left the priory to set up whatever little trap they wanted for Sutekh before he used the time space tunnel.

But whys Sutekh using it at all? Why not just start his rampage of death and terror right there in Egypt where he's imprisoned?

Let's be charitable and say the controlled Marcus had the tomb sealed after he'd removed all the relics and servitor robots for transport to England. If that's the case it might have been an idea for it to have been said, perhaps by Dr Warlock, who's concerned about Scarman and has contacted Egypt to find out what he was up to, as he confronted Namin in episode 1.

SARAH: Doctor!
DOCTOR: That was careless of me. I forgot the thermal balance would equalise.
SARAH: Listen, this priory was burnt to the ground, remember?

Chekov's Gun: Sarah mentioned the priory burning down in episode 1 so come episode 4 it needs to be in flames somehow!

DOCTOR: Yes. Perhaps it is time we were leaving. We don't want to be blamed for starting a fire, do we?
SARAH: No.
DOCTOR: I had enough of that in 1666.
SARAH: What?

1666 is the year of The Great Fire Of London. Is the Fourth Doctor claiming responsibility for starting it? It's a bit worrying if he is: we see the Fifth Doctor at the fire's start caused by the Terileptils in The Visitation in a few years time! 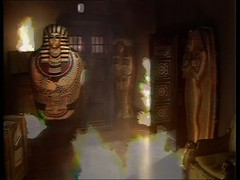 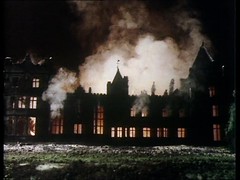 I know Pyramids of Mars is loved by Doctor Who fans the world over but...... something about it doesn't quite work for me. I'm not sure what though. I've never liked this last episode terribly much but the first few are rather grim with, apart from a few witty one liners, little humour or light to it.

Is Pyramids of Mars the first Doctor Who story where everyone dies? Possibly. Celestial Toyroom? Most of the characters were imaginary, ditto The Mind Robber (although I think the Master survives at the end). Sometimes I've watched it and got into the first three episodes, others they've left me cold. This time I've been more towards the second of these two views.

Pyramids of Mars has been repeated twice by the BBC: The first time was on 27 November 1976 as 60-minute compilation and then episodically over 17 years later from 6 to 27 March 1994 on BBC2. It was novelised by Terrance Dicks in 1976, including an epilogue where Sarah, on her return to the 20th century, looks up the Priory fire in an old edition of the local paper and reads a report which attributes the deaths to some of Lawrence Scarman's inventions!

A compilation video of the serial was released in February 1985 with the full episodic version following in February 1994. Pyramids Of Mars was released on DVD on 1st March 2004 having topped a Doctor Who magazine poll the year before as the story most wanted for release on DVD. I'm told that Pyramids of Mars is available with the DVD & Blu-ray of The Sarah Jane Adventures - Series 4 making it the first classic Doctor Who story to be released on the Blu-Ray format.