448 The Talons of Weng-Chiang: Part One

"Have I ever, in my thirty years in the halls, seen such a dazzling display of lustrous legerdemain? So many feats of superlative, supernatural skill? The answer must be never, sir, Never!"

At a Victorian theatre a cab driver arrives enquiring of Theatre Manager Henry Gordon Jago and his star hypnotist & ventriloquist Li H'sen Chang as to the whereabouts of his wise. The Doctor & Leela arrive nearby, intent on visiting the Theatre. The taxi driver is murdered by the ventriloquist's dummy, Mr Sin, who is moving by himself and the Doctor & Leela attacked by a group of Chinese workers. A policeman arrives and takes the Doctor & Leela into custody along with one of the men attacking them. Li H'sen Chang is called in to translate but when left alone he gets the man to commit suicide taking scorpion venom. Jago finds blood on the hands of Mr Sin. 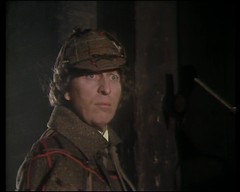 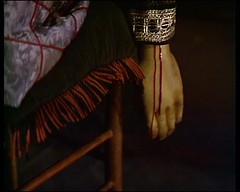 An autopsy is organised allowing the Doctor to meet pathologist Professor Litefoot and gets to see the mutilated body of the taxi driver. The Doctor finds evidence that the man was killed by a giant rat. The Doctor is assaulted by another Chinese man in the street who Leela kills. They venture into the sewers where they are confronted by the giant rat. 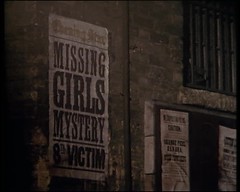 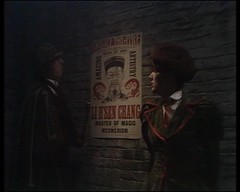 Ah, Victorian London. Jack the Ripper, Sherlock Holmes, pea soupers. An ideal setting for a Doctor Who story and it's amazing that, bar a visit to a Victorian Country House, that Doctor Who hasn't visited this era & setting before. Oddly enough that visit, in Evil Of The Daleks, took place in the end of season story too exactly ten years before this, Yes, OK, The Gunfighters is set just eight years earlier, but that takes place on the other side of the world! Throw in some Chinese gangsters and a few disappearing women (we're back to the Ripper again) and away we go.

Cast time, and there's a fair few characters and extras in this one!

Christopher Benjamin, plays theatre owner Henry Gordon Jago. He was previously Sir Keith Gold in Inferno, and appears in the new series as Colonel Hugh in The Unicorn and the Wasp. He was in The Prisoner three times: as the Labour Exchange Manager in Arrival, Number Two's Assistant in The Chimes of Big Ben and Potter in The Girl Who Was Death. You can see him in one of my favourite Inspector Morse episodes Cherubim & Seraphim where he plays Professor Furlong though my wife would probably more identify him with being Sir William Lucas in 1995 adaptation of Pride and Prejudice. He was in Gangsters, by future Doctor Who scribe Philip Martin, as the Assistant managing director where he appears alongside several other members of the cast of this story. He appeared in the 1990s The Tomorrow People as Middlemass in The Monsoon Man: Part 5. I assume the reason he's playing the French Ambassador in the Yes Prime Minister episode A Diplomatic Incident was because Andre Maranne, UK TV's resident Frenchman, had already played another character in the series! 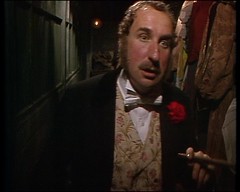 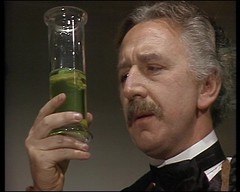 His opposite number Professor Litefoot is played by Trevor Baxter who seems to have avoided playing science fiction and fantasy roles till he returned to the role of Litefoot for Big Finish.

Chris Gannon was a Patient in the second episode of The Day of the Triffids produced by this story's director David Maloney. He's also in Gangsters appearing as the IRA Unit Commander. 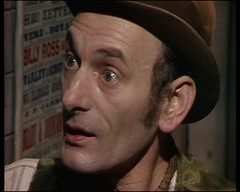 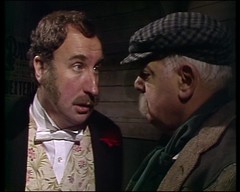 The supporting artist playing the theatre doorkeeper, Charles Adey-Grey was in Day of the Daleks Episode Four as an American Diplomat and can be found in Doomwatch as a Magistrate in Friday's Child.

Aggrieved husband Buller is played by Alan Butler. He's got a Blake's 7 to his name appearing as Dal Richie in the first episode The Way Back. 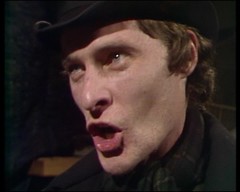 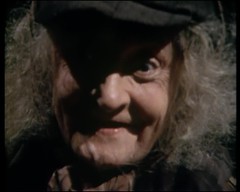 Playing the Ghoul by the riverside is
Patsy Smart: she too will be in Blake's 7 as Giroc in Duel. She can be seen in The Prisoner episodes Arrival, where she's a Waitress, and Dance of the Dead, where she's the Night Maid. She has the recurring role of Aunt Mable in Rentaghost on her CV too.

The group of Chinese thugs who kill Buller and attack the Doctor are notable for mainly being not Chinese! Because the scene involved fighting stunt men were required and no stuntmen of Chinese origin could be found working in the UK! So we have the familiar faces of Stuart Fell, Alan Chuntz and Max Faulkner making up the three who actually attack the Doctor! Of the original party of four the only actor actually of Chinese extraction is John Wu who plays the member of their party who is captured by Leela! 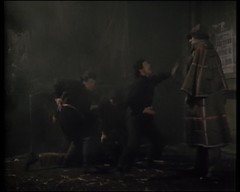 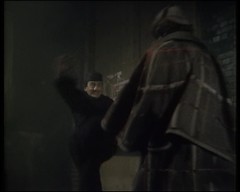 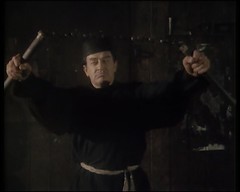 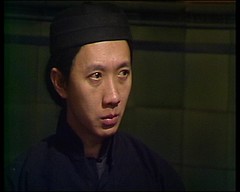 Interestingly although there's clearly four people trying to remove the body, FIVE people can be seen attacking the Doctor at the end! According to the production notes on the DVD the count was meant to be five but one of the extras turned up late! according to IMDB somewhere in this episode are two Chimney Sweeps. No I've not spotted them either! One of them, Kevin Sullivan will be in Blake's 7 as a Robot Operator in Seek-Locate-Destroy. The other is Arnold Lee who we'll attempt to spot later!

Finally, making an on-screen appearance for the first time, Dudley Simpson, the series regular composer, appears as the Conductor. 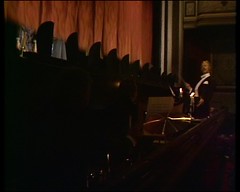 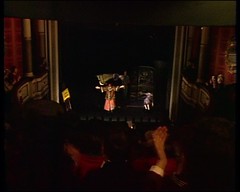 Dudley Simpson is conducting the orchestra in front of the auditorium at the The Royal Theatre, Northampton. The town is used for several other locations in the story most of which can be seen clearer in the next episode! However in this episode we also see Skin Market Place, serving as the streets near where the Tardis landed, Clink Street, for the actual landing site and where Buller is pursued, Winchester Square, for the scenes of Chang's carriage, and Wapping Old Stairs where the body in the river is found.