447 The Robots of Death: Part Four

"Your orders are to find and destroy all remaining humans. Secrecy is no longer necessary."

Uvanov immobilises the robot attacking the Doctor with a probe from the repair bay. A robot gains access to Toos' quarters but is summoned away by SV7. The Doctor & Uvanov reach the command deck, closely followed by Leela & Toos and finally D84 bringing the near catatonic Poul. The Doctor has the others lock themselves into themselves onto the bridge while he, Leela & D84 go to deal with Taren Capel. Dask hammers on the command deck door but Toos won't admit him. He is revealed to be Taren Capel, and is dressed like a robot. The Doctor constructs a device to destroy robot brains and obtains some helium gas from the stores. They return to the workshop where Leela hides in a cupboard with orders to release the gas. Capel enters, and cripples D84. While the Doctor is strapped to the operating table by Capel, Leela releases the gas his voice begins to change. Capel tortures the Doctor but S84 activates the Doctor's device destroying himself and the robots accompanying Capel. SV7 arrives, and failing to recognise Capel's voice it kills him. The Doctor destroys SV7 with a probe. As Uvanov & Toos await a rescue ship The Doctor & Leela sneak away in the Tardis.

Superb. Fabulous. A great final resolution that's set up earlier in the episode...

TOOS: I don't understand what's happening. Robots can't harm humans. It's the first principle.
LEELA: The second principle is that humans can't harm robots. I know, I've tried, and they don't bleed.
TOOS: I think we should warn the Doctor. Doctor, can you hear me? Answer me, please.
SV7: SV7 here. Is that you, Acting Commander Toos?
TOOS: Yes. SV7, listen. Some of the Voc class robots are running berserk, out of control and dangerous. Do you understand?
SV7: I understand. Countermeasures are being taken. Report your position, please.
TOOS: I....
LEELA: Shush. In your cabin.
SV7: Please say again, Commander. I must know your present position.
TOOS: I'm in my cabin, SV7.
SV7: Please stay in your cabin, Commander. There is great danger if you leave it.
TOOS: What was all that about?
LEELA: There's something wrong. I could feel it.
TOOS: I didn't notice anything. Except
LEELA: There was something.
TOOS: The robots are programmed to understand our voice patterns.
LEELA: So?
TOOS: My voice is in the Command programme. Why did SV7 ask if it was me?
LEELA: Because that wasn't SV7.

Chekov's Gun: Having established the robots identify voice patterns, which maybe they could have slipped into an earlier episode, we then proceed to do something which changes voices.

DOCTOR: Now this is a cylinder of gas. When Dask comes in, I want you to turn the valve, so.
LEELA: So?
DOCTOR: No, when Dask comes in.
LEELA: What will it do?
DOCTOR: Hmm?
LEELA: I said, what will it do?
DOCTOR: Change his voice. : When a mixture of air and helium is breathed, it alters the resonance in the larynx. Didn't they teach you that in the jungle?
LEELA: So the robots won't recognise Dask's voice. They won't obey him.
DOCTOR: That's it.

Of course before this Dask can't resist going the full Bond villain on us, even strapping the Doctor down while pointing a laser at him in shades of Goldfinger!

DASK: Do not kill him. Not yet. Bring him to the bench. 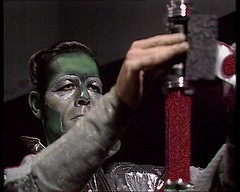 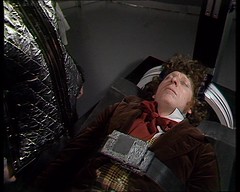 DOCTOR: Hello, Dask. Nee Taren Capel.
DASK: I'm glad you have recovered, Doctor.
DOCTOR: Oh? Why?
DASK: You came close to ruining my plans. It's fitting I should make you suffer for that.
DOCTOR: I see. You're one of those boring maniacs who's going to gloat, hmm? Are you going to tell me your plan for running the universe? (Dask's voice starts to go up in pitch as the helium takes effect.)
DASK: Oh no, Doctor. I'm going to burn out your brain. Very, very slowly.
DOCTOR: Dask. Dask! You look ridiculous in that outfit. Not half the robot your father was.
DASK: You insolent animal!
DOCTOR: Losing your calm, Dask, hmm? That's not the robot way. It was your verbal and physical precision that made me spot you. Robot upbringing?
DASK: Yes, Doctor. I was brought up a superior being. Brought up to realise my brothers should live as free beings, and not as slaves to human dross.
DOCTOR: Robots would have no existence without humans. Don't you see that, Dask?
DASK: Now I shall free them. I shall programme them with the ambition to rule the world, and then ,,,,

Describing these episode to you I inevitably have to cut out some detail and this story is packed with wonderful little detail: the corpse markers, the ranks for the crew that tell you what they do, the detailing of Robophobia which causes the full story of what happened between Uvanov and Zilda's brother to come out, in the process revealing what Poul and D84 have been up to:

UVANOV: I don't understand.
DOCTOR: Shut the door, Toos. I may not have time to explain. There's a new generation of killer robots about, Uvanov. The killers are controlled by Taren Capel, and D84 is controlled by Poul. These two are undercover agents for the Company.
D84: Poul is damaged. I do not understand what has happened to him. This may be because I am not human.
DOCTOR: Yes, that's very likely.
TOOS: How did you find out about Poul?
DOCTOR: Well, his body language was all wrong.
LEELA: What's body language?
DOCTOR: Well, it's a theory that a person expresses himself in the way he moves.
LEELA: I said he was a hunter.
DOCTOR: Yes, you did. Do you know what's wrong with Poul, Uvanov?
UVANOV: Yes. Robophobia.
DOCTOR: That's right. The Loid call it Grimwade Syndrome.
UVANOV: I have seen it, Doctor, once before. My very first command. A young kid just ran outside the mine. I tried to save him, but I couldn't. I'll never, ever, forget the look on his face.
TOOS: Zilda's brother.
UVANOV: His father, of course, had it all hushed up. He was afraid his son would be thought a coward. But robophobia is a mental thing, right?
DOCTOR: Oh, yes, yes, it is, until one gets its hands around your neck. I don't suppose there are any weapons aboard this mine?
TOOS: They aren't necessary.
DOCTOR: They are now.

The Doctor goes into further detail:

LEELA: Look at his hand, Doctor. That's blood.
DOCTOR: Yes, Borg's at a guess. He was strong enough to put up a struggle.
LEELA: If Poul saw that....
DOCTOR: Yes, that's what probably triggered his collapse.
LEELA: Doctor, what is robophobia?
DOCTOR: It's an unreasoning dread of robots. You see, most living creatures use non-verbal signals. Body movement, eye contact, facial expression, that sort of thing.
LEELA: Body language.
DOCTOR: Exactly. While these robots are humanoid, presumably for aesthetic reasons, they give no signals. It's rather like being surrounded by walking, talking, dead men.
LEELA: That's what Poul said.
DOCTOR: Yes. It undermines a certain type of personality, causes identity crisis, paranoia, sometimes even personality disintegration. Robophobia. At least, that's Grimwade's theory. 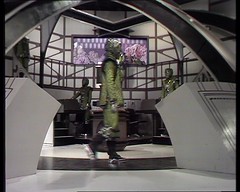 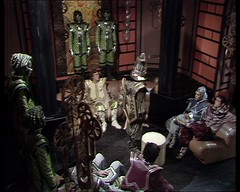 And the design. Oh what wonderful sets and corridors, a lavish environment completely different from the harsh functionality you usually see on spaceships. 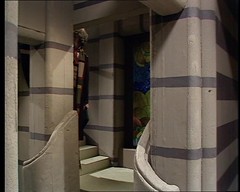 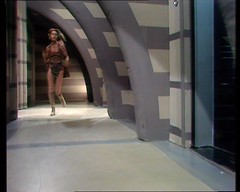 But best of all: The Robots. How fabulous do they look? 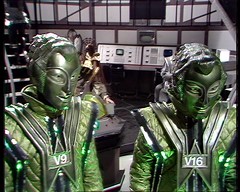 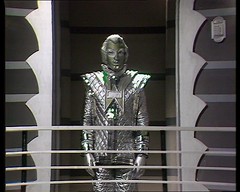 D84: Please do not throw hands at me. She will recover. 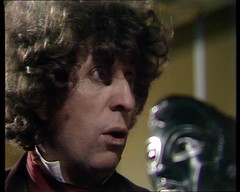 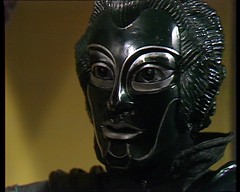 LEELA: So Dask turned off all the friendly mechanical men.
DOCTOR: Yes, planning to modify them and reactivate them later. Today the mind, tomorrow the world. Right now he must be a happy little maniac.
(D84 enters with a white gas canister.)
D84: Is that what you wanted?
DOCTOR: Yes. Well done, D84. Now you're going to have to stay here.
D84: I cannot do that.
DOCTOR: D84, this is a final deactivator. If I have to use this and you're around, it'll destroy your brain.
D84: I am not important.
DOCTOR: What? I think you're very important.
D84: My duty is to the Company.
DOCTOR: All right, but you be very careful.
D84: I will.

The Doctor will shortly end up with a robot companion but they could have done worse than leave the Sandminer with D84 in the Tardis but sadly he gets blown up at the end of the story, sacrificing himself for the Doctor and the surviving crew. I'm more sad D84 died than many of the humans I've seen perish in Doctor Who!

The long & the short of it is that Robots of Death is probably one of my favourite Doctor Who stories and is also one of the best. As we shall see in a short while the two are not exclusive to each other. If I was looking for a classic Who tale to show to a "Not-We" this would be it.

Sadly it's the last directing job for the show for Michael Briant. While his stories haven't necessarily always been from the top drawer he's always done his best with the material that he's been given and, since he started contributing to the DVD range, has been an enthusiastic & entertaining commentator - see Colony in Space & Sea Devils for the two commentaries that he's on that have so far been released.... and bellow for a third that's coming shortly!

Although this is the only appearance of The Robots of Death some of the costumes go into store and pop up again in the most odd of place. I can recall spotting at least one in Destiny of the Dalek during the Romana regeneration sequence. Last Christmas I had my attention drawn to this blog entry on Rentaanta, the Rentaghost Christmas special which shows the three ghosts wearing them at the end!

Robots of Death was repeated later that same year (and very early the next) as two 50-minute episodes on the Saturday 31 December at 6:25pm & Sunday 1 January 1977 at 4:45pm. Terrance Dicks novelised Robots of Death in the middle of his "one book every month" phase. It isn't the greatest or indeed longest book in the range. It was released on video first as a compilation tape in 1986 and then as an episodic tape in 1995. I'd never had that much enthusiasm for the story from what I read about it and didn't buy it during my initial phases of video buying. I acquired it while at University (Royal Holloway College, University of London) and can remember sitting down with some friends to watch in in my room and thinking "my goodness, this is rather good really". Doctor Who - The Robots Of Death was the second DVD release on 13th November 2000 and as such isn't quite up to the technical quality of some of the later titles. The commentary in particular, the first to be recorded, featuring writer Chris Boucher & producer Philip Hinchcliffe is a bit flat and is the only one just to feature production personnel. This made Robots of Death the ideal candidate to be revised and it was included in the Revisitations III box set along with Tomb of the Cybermen, which needs VIDFiring, & The Three Doctors, which had a fault. New documentaries, a brand new commentary featuring Tom Baker, Louise Jameson, Pamela Salem, who played Toos, & Director Michael E. Briant.