453 The Talons of Weng-Chiang: Part Six

"Let the talons of Weng-Chiang shred your flesh!"

Leela is overcome by "Weng Chiang's" chloroform. He speaks with the Doctor who uses the Trionic lattice to bargain with him for him to be taken to the House of the Dragon so that Jago & Litefoot can be released. A recovering Leela follows them. When they arrive the Doctor tells "Weng Chiang" that he has been to his time, and gets him to admit that he is Magnus Greel, the butcher of Brisbane. The Doctor tells him his experiments were a failure. He is reunited with his friends but Mr Sin attacks them with a laser cannon hidden in a statue and they are imprisoned. Greel uses the retrieved Trionic lattice to reactivate the time cabinet. Leela attacks Greel but she too is captured and placed into the chamber Greel uses to absorb life force. Using a sabotaged gas pipe the Doctor creates an explosion allowing Jago, Litefoot & himself to escape. The Doctor rescues Leela from the machine, but Mr Sin opens fire on them again. Greel is shot at by Sin and ends up being thrown into the machine by the Doctor & drained. Mr Sin attacks them but is overpowered by the Doctor and deactivated. He then destroys the Trionic lattice rendering the Time Cabinet useless & no further threat. The Doctor & Leela take leave of Jago & Litefoot who watch them enter the Tardis & dematerialise.

LITEFOOT: I don't believe it!
JAGO: I've said it before and I'll say it again. Our policemen are wonderful.
LITEFOOT: But it's impossible, Henry. Quite impossible.
JAGO: Good trick, eh? I venture the great Li H'sen Chang himself would have appreciated that. 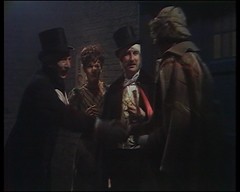 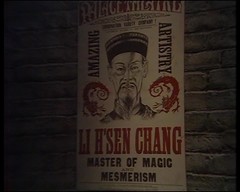 Oh look, there's the Doctor turning his pockets out *AGAIN* at the start of the episode. Seen that routine a couple of times now!

The Doctor FINALLY finds out who his foe really is:

WENG: How can you understand the functions of a catalytic extraction chamber, Doctor? Part of a technology far beyond your time.
DOCTOR: Simple old-fashioned cannibalism. That machine just saves you having to chew the grisly bits.
WENG: Much more than that. The secret of life.
DOCTOR: Bunkum. Your so-called technology is the twisted lunacy of a scientific dark age.
WENG: What do you know of my time?
DOCTOR: Everything. Where is it?
WENG: What?
DOCTOR: Your pig-faced, pig-brained Peking Homunculus.
WENG: You know of that? How?
DOCTOR: I was with the Filipino army at the final advance on Reykjavik.
WENG: How can you in the nineteenth century know anything of the fifty first? You lie!
DOCTOR: Listen. What's your name? What were you called before you became a Chinese god?
WENG: I am Magnus Greel!
DOCTOR: Oh, yes, the infamous Minister of Justice. The Butcher of Brisbane. WENG: It is impossible for you to know these things!
DOCTOR: I know you're a wanted criminal and that a hundred thousand deaths can be laid at your door.
WENG: Enemies of the state! They were used in the advancements of science.
DOCTOR: They were slaughtered in your filthy machine.
WENG: So, you are from the future, and I, for all my achievements, are only remembered as a war criminal. Of course, it is the winning side that writes history, Doctor. Remember, you would not be here if it were not for my work.
DOCTOR: Your work? Your work?
WENG: Yes! I made this possible. I found the resources, the scientists
DOCTOR: The zigma experiments came to nothing. They were a failure. Nothing came of them.
WENG: No! No, they were a success! Why, I used them to escape from my enemies. The first man to travel through time.
DOCTOR: Hmm. Look what it did to you.
WENG: A temporal distortion of my metabolism. It can be readjusted. 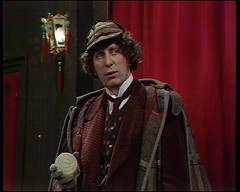 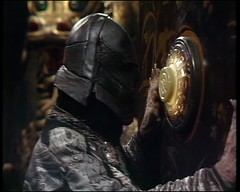 Now he's in possession of both key and time capsule he can reactivate them.

WENG: Perfect. Perfect. After all these years the function is unimpaired. Everything exactly as it was. The parallax synchrons fully charged, the strata tube set at maximum. He was wrong! Wrong! The zigma experiment was a success!

Unfortunately he's not listened to the Doctor's warnings.

Mind you it appears he's not the only one to go insane this episode.

The Dragon statue has been a magnificent centrepiece to the set for the last couple of episodes. The moment you see Sin climb into a cockpit inside it, the dragon's eyes start glowing and the various characters being followed in a heads up display you'll have an inkling of what might be about to happen! 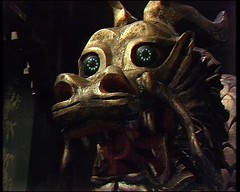 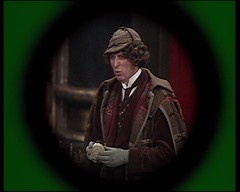 Let me see if I get this straight:

WENG: Why don't you come down from there? Sulking because I wouldn't let you kill the Doctor, is that it? Oh, you can kill him soon enough, Sin, but first I must drain every scintilla of his knowledge about the zigma experiment. You can kill him then, and as many more as you wish before we leave.

Mr Sin, because Greel won't let him kill the Doctor, suddenly looses it and opens fire on everyone? What? 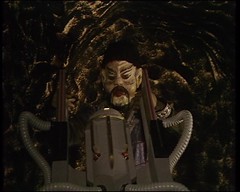 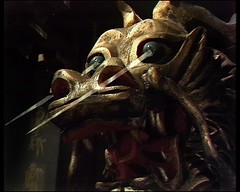 He's instructed to kill the Doctor and friends:

Yes there's been hints he might be a bit unstable but this is a huge dive off the deep end, especially when he mows down all of Weng Chiang's followers.

His boss however, well maybe there's some explanation behind that as he overhears Magnus Greel's exchange with the Doctor:

WENG: I can escape you, Doctor, as I escaped my enemies before.
DOCTOR: Greel, listen. If you activate the zigma beam, it'll be certain death for all of us.
WENG: Lies, Doctor.
DOCTOR: Listen, Greel! Greel, listen! The zigma beam is at full stretch. If you trigger it again, it'll mean certain collapse. You know what that means?
WENG: You can't fool me.
DOCTOR: There'll be a huge implosion, Greel, and you'll be at the centre of it. The zigma experiments were a disaster!
WENG: No, no, the zigma experiment was a success! A brilliant, total success!

And maybe it's a hint of self preservation that has him turn on his master?

Not that it helps him in the long run with first Leela shooting him through the dragon statue and then the Doctor ripping out his fuse.

It's a good episode for Leela with helping to rescue the Doctor and getting to attack her foe:

LEELA: Die, bent face!
WENG: No, spare me, please!
LEELA: Spawn of evil. Now I destroy you!
WENG: The second time! The second attempt on my life by this she-devil! Hold her still! No. No, I have a better fate for you. She will be the first morsel to feed my regeneration.
LEELA: Kill me any way you wish. Unlike you, I am not afraid to die.
WENG: We shall see. Bring the tigress here.
WENG: At my camps, the extraction process was considered the most painful of all. They pleaded for anything but this.
LEELA: I shall not plead, but I promise you this. When we are both in the great hereafter, I shall hunt you down, Bent Face, and put you through my agony a thousand times!
WENG: Silence the spitfire!

Correct me if I'm wrong, doesn't the Doctor throw Greel into the machine which drains his life energy? A bit bloodthirsty for the Doctor. There again the Doctor was probably not expecting that to happen because not five minutes earlier he threw an axe at the machine, seemingly crippling it and allowing him to rescue Leela. Yeah that's a little bit of a mess and a rush, obviously hoping we'll look the other way while the action happens.

Talons of Weng Chiang is a huge fan favourite story. Even Liz loves it, barring the casting of an English actor John Bennett as the lead Chinese character Li H'sen Chang and *that* Giant Rat, which I don't mind. However the story has never really grabbed and watching it again episodically I'm still not feeling any great love for it.

This completes three years of Tom Baker as Doctor Who taking him past, in terms of time, William Hartnell & Patrick Troughton's tenures as the Doctor. Jon Pertwee did five years but at the moment all three are ahead of Tom in terms of episodes.

This story is the last for two members of the behind the scenes personnel. Producer Philip Hinchcliffe leaves as of the end of this story, bound for the troubled new series Target. Target's creator, and intended producer, Graham Williams moves the other way becoming the producer of Doctor Who alongside Robert Holmes, who had intended to depart the script editor's role but was persuaded to stay on.

Robert Holmes had originally planned that Robert Banks-Stewart, writer of Terror of the Zygons & Seeds of Doom, would write the final story of this season which was commissioned under the title "The Foe From The Future". Banks-Stewart was then offered the Script editor's job on Thames' series Armchair Thriller which meant he was unable to script this story leaving Holmes to write his second story of the season. By this point it became known that Philip Hinchcliffe would be leaving the programme, so he encouraged Holmes to write whatever he wanted and then directed the departments involved in making the story to ignore the usual budgetary restraints. Consequently although the story went over budget it produced something that looks superior to many of the tales produced at the same time.

It's also the last story directed by David Maloney, who'd been involved with the series since Patrick Troughton's last year directing The Mind Robber, The Krotons, The War Games, Planet of the Daleks, Genesis of the Daleks, Planet of Evil & The Deadly Assassin before this. He went on to produce and direct for the BBC's new science fiction series Blake's 7 and produced the BBC version of Day of the Triffids. He died in 2006 aged 72.

The making of this story was covered by a documentary called Whose Doctor Who which included a number of clips from older stories. Bar Blue Peter slots, this was the first dedicated program to look at the series and how it was made. It's available with this story in Doctor Who: Revisitations Box Set - Volume 1.

Talons of Weng Chiang ends the 14th (1976/7) season of Doctor Who. During the summer one story from it, The Deadly Assassin, was repeated on Thursdays from 4 to 25 August at 6:20pm.

Talons of Weng Chiang was novelised in a rather slim volume by Terrance Dicks. The local library didn't have it so my first encounter with it came courtesy of a mobile library in Kingston. It was first released on video a compilation volume in Australia in April 1987 and then in the UK in 1988, which I received as a Christmas present one year. It's one of three stories that were released as a compilation video not to have an episodic release: the other two are the Seeds of Death & The Time Warrior. It was first released on DVD on 28th April 2003 and was re-released on 4th October 2010 as part of Doctor Who: Revisitations Box Set - Volume 1 with The Caves Of Androzani and Doctor Who - The Movie.

Forty Years Of Tom Baker's Doctor will return on Sunday 3rd September 2017 for Horror of Fang Rock: Part One!