At an isolated lighthouse, keeper Vince sees a purple light streak across the sky but is ridiculed by his fellow keepers Ben & Reuben. As fog surrounds the island the Tardis arrives bearing the Doctor & Leela. The lighthouse's electric supply is drained causing the light to cut out and attracting the Doctor's attention. Something enters the lighthouse and attacks Ben. The Doctor offers his assistance fixing the generator, but in doing so they realise Ben is missing and the Doctor goes to find him, but instead finds his body, killed by a massive electric shock. The Keepers believes the generator is responsible but the Doctor thinks an alien is among them. Reuben is suspicious of the Doctor & Leela. Vince tells the Doctor of the light he saw in the sky and how the fog & cold arrived. Exploring the beach Leela finds a number of electrocuted fish and is stalked by something. Vince finds Ben's body has disappeared which spooks him. A boat is sighted not far off the island and unable to alter course runs aground. 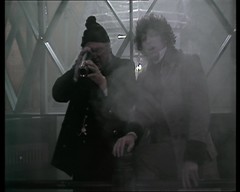 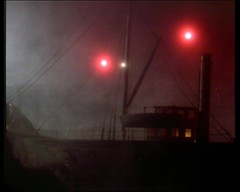 A small group of people, an isolated location and an alien menace bumping people off. That means one thing - It's "Base Under Siege" time! And this one's fab. It helps by looking decent and tapping into the BBC's natural ability to do period drama well by setting it around the start of the 20th century. So a limited number of sets and characters, all of which we know what they should look like, help this look really good.

Our starting point is the lighthouse with it's three keepers on duty:

VINCE: Ere, Reuben. Come and look, quick.
REUBEN: What is it, boy?
VINCE: This light, shot across the sky. Went under the sea, it did, and the sea was all glowing. Over there.
REUBEN: Nothing there now.
VINCE: Not now, maybe. I told you, it went under the sea.
REUBEN: It could have been a, what do they call them, meteor.
VINCE: Mmm. Weren't far off.
BEN: Oh, sightseeing now, are we? Hoping to spot some of them bathing belles on the beach, eh?
REUBEN: Vince here's been seeing stars.
VINCE: I saw a light. Clear across the sky it came and went under the sea.
BEN: Shooting star, eh?
VINCE: Weren't no shooting star. I've seen them before.
REUBEN: Bring you luck, boy, that will. Bit of luck coming for you.
VINCE: On this rock? Not till my three month is up.
BEN: Well, whatever it was, it's gone now. So long as it isn't a hazard to navigation we don't have to bother with it.
VINCE: It were all red and glowing.
BEN: Aye, well, I've heard enough about now, lad. I'm off downstairs for my supper. You just forget it. 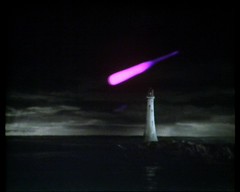 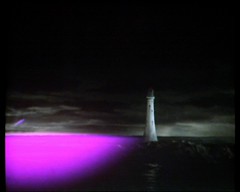 The keepers are great in this early section of the story continuing what are obviously long standing arguments and teasing each other:

REUBEN: The old days were simple enough. You just filled her up, trimmed the wick, and that old lamp just went burning away steady as you like.
BEN: It wasn't only the lamp that burned sometimes though, was it. What about all those fires they had, eh? Towers gutted, men killed.
REUBEN: Well, carelessness, that was. That or drink. Oil's safe enough if you treat her right.
BEN: Now listen, Reuben. I've seen the inside of some of them old lighthouses
REUBEN: I served twenty year in one.
BEN: Like the inside of a chimney, they was. Grease and soot everywhere, floor covered with oil and bits of wick.
REUBEN: Never, mate. Never.
BEN: And as for the light. Oh dear oh me. You couldn't see it from the inside, never mind from the out. Great clouds of black smoke, soon as they were lit.
REUBEN: If your electricity's so good, why are they going back to oil? You tell me that.
BEN: Ah, now that's an oil vapour system. That's a different thing altogether. They're going back to that as they reckon as how that's cheaper, see.
REUBEN: Course it's cheaper.
REUBEN: Time they've paid out all that coal. Ahoy.

VINCE: That you, Reuben? King Edward, eh? Well, your majesty, will you tell the principal keeper that there's a fog coming up here like nobody's business.


REUBEN: Vince says there's a fog coming up.
BEN: Fog? There weren't no sign of that earlier.
REUBEN: He reckons it's a thick 'un, Ben.
BEN: I'd best go and see for myself. After all, the boy's only learning.


BEN: I never seen a fog come in like that afore. And thick!
REUBEN: Worst thing for sailors that ever was.
BEN: Do you feel that cold too?
REUBEN: Aye.
BEN: That come from Iceland, I reckon.
VINCE: It's come from where I saw that thing fall.
BEN: Oh, get along with you, boy. It's about time you got that siren started.
REUBEN: He might be right, Ben. It do seem unnatural.
BEN: Not you, too? And I want a blast every two minutes, and I don't mean ten.
REUBEN: Another thing with oil, it gives a better light in fog.
BEN: Oh, rubbish. Electricity's just as good, and a darn sight more reliable.
REUBEN: Reliable?

Right from the start we know something is up with the glowing object crossing the sky and crashing into the sea. Throw in the fog and the electricity cutting out and the mystery and tension quickly rises. It then soon becomes clear that something has survived the crash and although we don't see it it there's hints at it with the point of view shots and the green glow when it's very close. 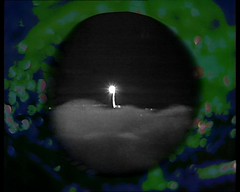 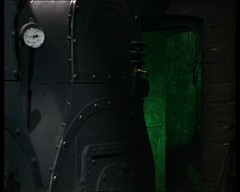 LEELA: You said I would like Brighton. Well, I do not.
DOCTOR: Does this look like Brighton?
LEELA: I do not know.
DOCTOR: It's not even Hove. It could be Worthing.
LEELA: The machine has failed again?
DOCTOR: Oh, not really, not failed. We're on the right planet, in the right time, roughly in the right general direction, assuming this is Worthing.
LEELA: You cannot tell.
DOCTOR: Because the localised condition of planetary atmospheric condensation caused a malfunction in the visual orientation circuits. Or to put it another way, we got lost in the fog. Never mind. Easy enough to pop back in and try again. That's odd.
LEELA: What is?
DOCTOR: A lighthouse without a light.

He's then immediately suspicious when the first dead body is found:

LEELA: You do not believe the machine killed him? Then what?
DOCTOR: I thought there might have been something nasty in the coal hole. There's something nasty somewhere.
LEELA: A sea creature?
DOCTOR: What, that can open and shut doors and doesn't so much as leave a wet footprint, and has the ability to drain off electricity?

But any further investigation is postponed till later episodes by the more immediate problem of the boat crashing into the rocks, itself possibly caused by whatever has turned the electricity off and dimmed the lights.

it's probably about as perfect a first episode as you could want really!

Of the three man Lighthouse crew, two have been in Doctor Who before: Reuben is played by Colin Douglas who was in Doctor Who 10 years previously as Donald Bruce in The Enemy of the World. Despite me only knowing him from Doctor Who his his imdb entry shows him to have been a very busy television actor in the 60s and 70s! I'll need to dig out my The Sweeney DVDs as he has a repeat role as the Flying Squad Commander in that appearing in Ringer and Contact Breaker. I know for certain I saw all the episodes of God's Wonderful Railway as a child so I would have seen him as George Grant in Fire on the Line, the final Second World War set segment of the production. I found an episode on YouTube and instantly recognised him! 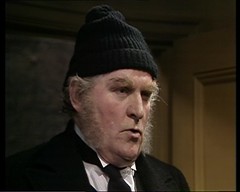 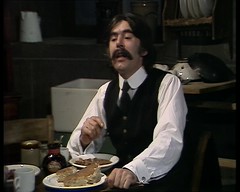 The already deceased Ben is played by Ralph Watson who was the Generator Scientist in The Underwater Menace, Captain Knight in The Web of Fear and Ettis in The Monster of Peladon. He's got a Porridge episode on his CV playing the Landlord in A Day Out. You can hear him interviewed by Toby Hadoke in Who's Round 154 and he appears on the Fantom Films Who Talk Commentary CD for this Web of Fear speaking about episode 1, 2 & 4.

The third member of the team, John Abbott playing Vince. The only other science fiction I can see on his CV is as Phipps in Timeslip The Wrong End of Time: Part 1 but he's been in loads of other things and most people will have seen him as the polite verger at the fourth wedding Four Weddings & a Funeral. 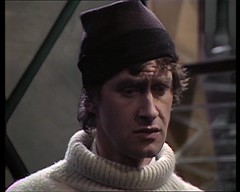 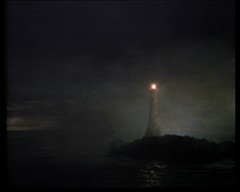 By an odd coincidence both the first & last stories of this season have pretty interesting tales of how they came to be both involving scripts written in a hurry and recording outside of Doctor Who's usual studios. Script editor Robert Holmes commissioned his old friend (and former Doctor Who script editor) Terrance Dicks to write a story based on one of the few horror tales they hadn't previously "paid homage to" over the last few years: Dracula. Dicks duly supplied the scripts for "The Witch Lords"/"The Vampire Mutation" only to then have the story spiked (staked?) when high ups at the BBC realised it would be airing at a similar time to the prestigious adaptation of the original story, Count Dracula. So Terrance Dicks was sent away to write another script in an extreme hurry and given the instruction to "set it in a light house". The following story, Invisible Enemy, was pulled into production early to give the production crew some extra time.... At this point it was discovered that there would be no studio space at Television Centre to record the story so for the first and only time in the show's history they decamped to the Pebble Mill Studios in Birmingham to record the story. Dicks' original script went into a drawer where it stayed for three years ..... 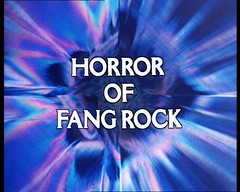 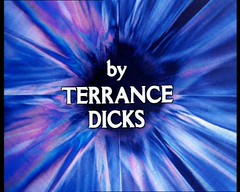