"Leela, I've made a terrible mistake. I thought I'd locked the enemy out. Instead, I've locked it in, with us!"

The Doctor searches for the missing Reuben, but while he is away Harker, working in the boiler room, is passed by the old lighthouse keeper looking rather odd. The Doctor pursues him through the lighthouse but he locks himself in his room and is bathed in a green glow. Palmerdale bribes Vince into sending a message for him. Harker & Leela lock them all in the lighthouse, bolting the door. While standing on the lamp gallery Palmerdale is killed by the creature. Leela tries to batter in the door of Reuben's room. Vince discovers Palmerdale is missing. The Doctor tells everyone the truth but they doubt his story. The Doctor, Harker & Skinsale go to investigate leaving Adelaide with Leela. They find Palmerdale's body outside and secure the door. A distraught Adelaide accuses Skinsale of killing him. Skinsale admits to wrecking the telegraph to prevent Palmerdale from contacting his broker. Reuben enters the boiler room and advances on Harker. The Doctor deduces that Palmerdale was electrocuted and that the creature must have climbed the outside of the lighthouse. Vince notices the boiler pressure has fallen, and investigating the Doctor finds Harker's body. Then in the coal store he finds Reuben's body which has been dead for hours. From that he deduces that the alien has assumed Reuben's form and is locked in with them. 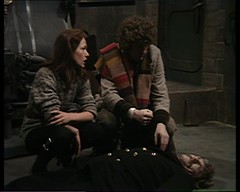 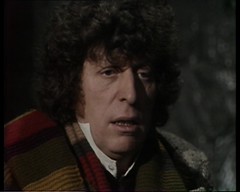 Yes it's more of the same, but it's so good that you don't mind. And of course in this episode the body count starts to rise a bit..... We discover Reuben died at the end of the previous episode then Palmerdale & Harker leave us during this one. 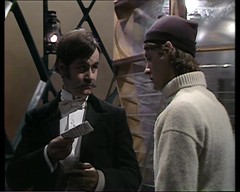 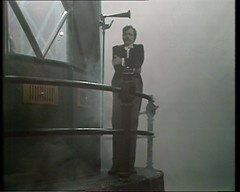 I feel no sympathy for Palmerdale at all. The character irritated me from the moment he first appeared being just interested in the money he could make. Indeed he meets his end, having tried to bribe Vince, at the hands of the creature while hiding outside the lamp gallery in order to conceal his bribery! 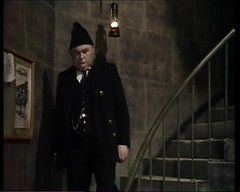 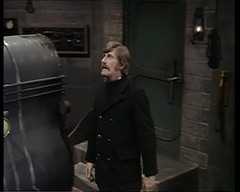 Harker is the only one of the four survivors from the yacht I have any sympathy for. He's crew and the story he related last issue is one of Palmerdale driving the rest of the crew on past safe limits for his own ill gotten gain. He's co-operated fully with the Doctor and indeed is helping keep the boiler going when he's cornered by an ashen "Reuben" who then kills Harker with a thoroughly nasty smile on his face. If any of the people from the yacht deserved to survive then he did! 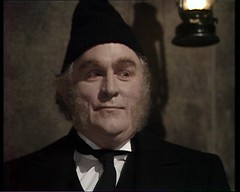 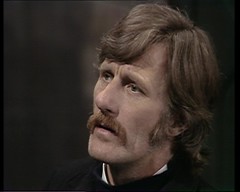 It's episode 3 and we still don't really know what our foe is!

VINCE: What do you reckon Reuben saw, Doctor?
DOCTOR: I don't know, Vince, but I think we'll find out by sunrise.
VINCE: Well, if it's the Beast come back, well, last time they found two of the keepers dead and t'other mad with fear. Well, Ben's dead, in't he? Reuben's mad. There's only me left now.
DOCTOR: That's superstitious nonsense, Vince.
VINCE: Is it? Look what happened to Ben!
DOCTOR: There are eight of us here. If it attacks again, we'll be ready and waiting. All the advantage is with us. Eight to one.

The survivors from the yacht still haven't grasped what's happening around them:

SKINSALE: What's all this about, Doctor?
DOCTOR: Survival, Colonel.
SKINSALE: Survival?
DOCTOR: Yes. Yours, mine, all of us.
SKINSALE: Oh, this mysterious beast that eats lighthouse keepers.
DOCTOR: Do you find that difficult to accept, Colonel?
SKINSALE: Oh come, Doctor, I'm a man of intelligence, of education.
DOCTOR: Quite so, quite so, and I don't believe in mythical sea creatures either.
ADELAIDE: Then why do you suggest that we're in danger?
DOCTOR: Because somewhere out there is a hostile alien from a distant planet, and I believe it intends to destroy us.
SKINSALE: A hostile alien from a distant planet?
DOCTOR: Yes.
ADELAIDE: You call yourself a doctor? That's the most insane suggestion I've heard in my life.
LEELA: Doctor, I cannot find the cowardly one.
DOCTOR: I've never been more serious, Colonel. We are facing an enemy of greater power than you can dream of.
SKINSALE: I do appreciate the scientific romanticism of Mister Wells, Doctor, but
HARKER: Yes?
DOCTOR: Herbert may have a few unimportant facts wrong, but his basic supposition is sound enough.
HARKER: Doctor?
DOCTOR: You think your little speck in the galaxy's the only one with intelligent life, hmm?

SKINSALE: You really believe in this thing, don't you.
DOCTOR: I do. Leela, stay here. Come on.

There's an interesting contrast between former tribeswoman Leela and the Adelaide, a typical Victorian/Edwardian lady:

DOCTOR: Leela, stay here. Come on.
ADELAIDE: I told him we shouldn't have come, but he wouldn't listen. He laughed when I said Miss Nethercott had seen tragedy in my stars.
LEELA: In your stars?
ADELAIDE: If only we'd stayed in Deauville. I knew something ghastly would happen. Her predictions are never wrong.
LEELA: I understand. She is your shaman.
ADELAIDE: What? No, Miss Nethercott is an astrologer. The finest. I consult her every month.
LEELA: A waste of time. I too used to believe in magic, but the Doctor has taught me about science. It is better to believe in science. 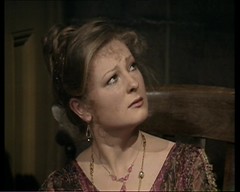 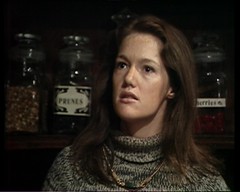 Adelaide then completely looses it when it turns out her employer is dead.

ADELAIDE: I can't bear it!
SKINSALE: Adelaide, come along. You must be brave. Adelaide.
ADELAIDE: Take your hands off me! You did it! You killed him!
SKINSALE: Me? Oh, don't be so ridiculous.
ADELAIDE: You went out after him, you followed him and then you pushed him.
SKINSALE: I was never in the lamp room.
ADELAIDE: Then where were you!
SKINSALE: True, I followed him, but only to find out what he was up to.
ADELAIDE: You did it, I know you did it.
LEELA: Enough!
DOCTOR: And what was he up to?
SKINSALE: He was trying to bribe that young keeper to telegraph a message to his brokers.
DOCTOR: Ah. And so you came down here and wrecked the telegraph.
SKINSALE: It was the only way I could think of stopping him. I'd have been dishonoured, ruined.
DOCTOR: Of course. So to protect your honour, you've put all our lives in danger.
SKINSALE: What?
ADELAIDE: You mean we've no way of contacting the mainland now?
DOCTOR: Oh, no. We're on our own now.

The Doctor then sums up what they know:

SKINSALE: I did not harm him, Adelaide. I swear it.
ADELAIDE: Then who did?
SKINSALE: I don't know. Harker, perhaps.
ADELAIDE: Harker?
SKINSALE: Why not? He attacked Henry earlier, blamed him for wrecking the ship.
ADELAIDE: That's absurd.
SKINSALE: It's no more absurd than thinking that I might have
DOCTOR: Murdered him? I wish you had.
ADELAIDE: What do you mean?
DOCTOR: Well, if you had murdered Palmerdale, everything would have been so much simpler. Unfortunately, he was dead before he hit the ground.
SKINSALE: What?
DOCTOR: Electrocuted. He was killed by a massive electric shock, in exactly the same way the keeper was.
SKINSALE: In the lamp gallery? That's not possible. That would mean that this creature can climb sheer walls.
DOCTOR: Oh, not only can it climb sheer walls, it's amphibious, it has some affinity with electricity and the technological ability to adapt its environment to optimum thermal levels. Are you following me?
SKINSALE: No.
DOCTOR: It likes the cold. Not enough data to place the species.
LEELA: Yes?
DOCTOR: But heat might be a method of defence.
LEELA: That was Vince. He said the boiler pressure has fallen, and the siren will not sound.

It certainly doesn't appears as if any of the Doctor's established foes are responsible for what's happening! 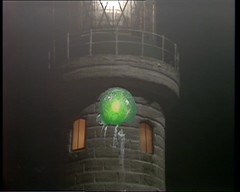 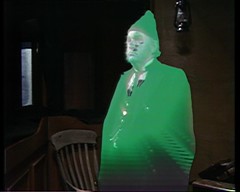 Indeed from what little we see it doesn't even resemble anything we've seen or heard of before. But the next episode has a little revelation for us on that score....

This story is the first one shown, although as we've seen not the first one made, with Graham Williams listed as producer. He'd come from a writing & script editing background and had just created the series Target for the BBC when production of that ran into trouble at the point that Philip Hinchcliffe attracted some controversy for stories produced under his watch on Doctor Who. So Williams, who had expected to produce Target, found himself on Doctor Who with his baby in Hinchcliffe's hands. No sooner had he arrived than the Vampire crisis (see episode 1) hit the show well and truly plunging him in at the deep end!