"Gentlemen, I've got news for you: This lighthouse is under attack, and by morning we might all be dead!"

While The Doctor aids the stricken boat Leela spots a glowing green creature on the beach. The Passengers on the boat, Lord Palmerdale, James Skinsale and Palmerdale's secretary Adelaide Lessage, are brought to the lighthouse. Reuben tells the Doctor & Leela the legend of the Beast of Fang Rock. Palmerdale is racing to get to London before the stock markets open but the Doctor tells him he has no chance. One of the ship's crew, Harker, finds Ben's body in the sea. Palmerdale demands Harker take them back to sea but he refuses. Returning to the beach the Doctor examines the evidence and tries to work out what they are facing. He believes it was attracted from the sea to the lighthouse by the electricity powering the light. Palmerdale tries to bribe Harker to send a message back to London but once again he refuses. The Doctor tells the refugees from the boat that the lighthouse is under attack, that they may die and they must stay inside. A cold descends on the lighthouse, the electric lights fail and from the boiler room comes the sound of Reuben screaming....

So continuing from where we left off: chuck a few new characters into the mix, one of whom is thoroughly unpleasant. Yes you can tell from here that they're all just fodder for the monster because there's no way the light house crew would keep it occupied for four episode. Ratchet up the tension and end on a blood curdling scream. Job done. And done really rather well indeed. The description above doesn't do the episode justice: it works and works very well.

The mystery of the alien visitor continues with the Doctor now convinced it's behind the electricity losses:

VINCE: She's on again now.
REUBEN: Damned electricity. Wouldn't happen with oil. Ahoy!
DOCTOR: No, I don't suppose it would. It seems to need electricity.

We don't get to see too much of the remaining lighthouse keepers this episode, with attention switching to the yacht survivors. 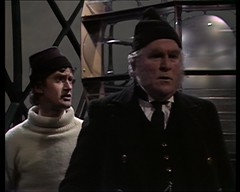 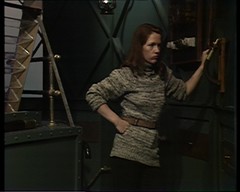 Leela however gets a very decent episode with lots to do, first operating the foghorn, and you can see how pleased she is with that job. However that enables her to be on the tower so she can spot the alien being: 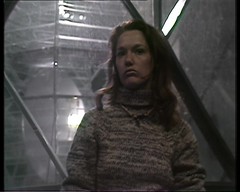 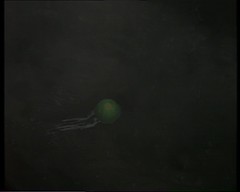 DOCTOR: What was it like?
LEELA: I could not see clearly. It shone like, like a fungus in the forest.
DOCTOR: Luminous. Do you think you could show me the spot?
LEELA: Yes. Yes, I think so. Don't tell the others. We don't want to start a panic.
REUBEN: What do you reckon be going on, mister?
DOCTOR: When I find out, I'll let you know.
REUBEN: I wouldn't try to find out. Tain't wise.
LEELA: What do you mean?
REUBEN: Reckon I know what you've seen. They always said the Beast of Fang Rock would be back.
DOCTOR: The Beast of Fang Rock.
REUBEN: Aye.

Apart from that we don't see too much of the alien either, just the green glow and iris view we saw in the first episode. Who and what it is remains a mystery! 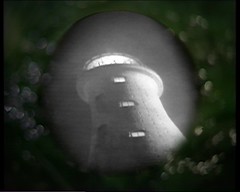 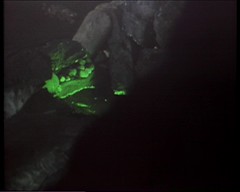 LEELA: Do you thing the creature will come back?
DOCTOR: I do. I think he was taking Ben's body away for examination when you saw it.
LEELA: Into the sea?
DOCTOR: Under the sea. Earlier tonight Vince saw what he called a fireball fall into the sea not far away.
LEELA: Another Tardis.
DOCTOR: Not another Tardis. A spaceship, perhaps. Yes, an alien creature which has never before encountered human beings might just behave that way.
LEELA: But why come here? There's nothing on this foggy rock.
DOCTOR: There's electricity. Perhaps that's what attracted it.
LEELA: An alien creature
DOCTOR: Yes.
LEELA: Travelling through space
DOCTOR: Yes.
LEELA: And yet desperate, you said. Why?
DOCTOR: Yes. Just a minute. It's behaviour pattern is furtive.
LEELA: What is furtive?
DOCTOR: That means it keeps out of sight while it spies out the land, hoping to mount a successful attack.
LEELA: Then we are not facing an enemy that is bold.
DOCTOR: No, but cunning. I don't think this fog's a freak of the weather.
LEELA: What are you talking about?
DOCTOR: I think it's been contrived to isolate us. That creature, or whatever it is, will be getting bolder by now. It's seen this primitive technology, it's had time to calculate the physical strength of its enemies. I think we're in terrible trouble.
LEELA: Do not be afraid, Doctor. If what you say is true, we must arm ourselves and post guards.
DOCTOR: What about the others? They'll think we're mad if we start talking about creatures from outer space.
LEELA: But we're from space. We're not of this Earth.
DOCTOR: Shush. Don't tell them that, whatever you do. What do you mean, do not be afraid. 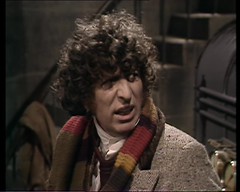 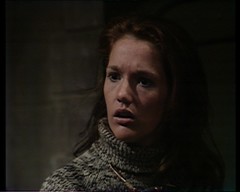 The yacht survivors are mainly a thoroughly unpleasant bunch and the Doctor can't be had with their petty concerns in the face of what else is happening:

DOCTOR: Where's Harker, your coxswain?
PALMERDALE: He stayed behind to secure the boat.
DOCTOR: I'll wait.
SKINSALE: He'll, er, he'll be up directly.
DOCTOR: Good.
SKINSALE: It was his seamanship got us ashore.
DOCTOR: And whose seamanship was it got you on the rocks?
PALMERDALE: Are you in charge here?
DOCTOR: No, but I'm full of ideas.
VINCE: Beg pardon, sir. Time I stoked the boiler.
DOCTOR: Yes, of course, Vince. Off you go. Leela?
LEELA: Yes?
DOCTOR: You'd better go with him.
LEELA: Yes, Doctor.
ADELAIDE: So, you're a doctor?
DOCTOR: Yes.
ADELAIDE: And you send women to stoke boilers?
DOCTOR: One of the keepers was electrocuted earlier this evening, and since then Vince doesn't like going down there.
SKINSALE: Yes, disturbing thing for a young fellow, first sight of death. I remember in India
PALMERDALE: Not one of your army stories, Jimmy. They're even more boring than your House of Commons anecdotes.
DOCTOR: Just a moment! We haven't been introduced.
SKINSALE: Oh. Well, this is Miss Lessedge, Lord Parmerdale's secretary. The wet gentleman is Lord Palmerdale, the financier. I'm Skinsale, the member for Thurley, Doctor er.
DOCTOR: Where were you heading?
SKINSALE: What?
DOCTOR: When your yacht struck?
PALMERDALE: Southampton. I've a special train waiting to take me to London, and I must be there before the 'Change opens.
ADELAIDE: If only we'd stayed in Deauville none of this would have happened.
PALMERDALE: We had a little flutter at the casino, though in Jimmy's case it was more of a plunge, what?
SKINSALE: Oh, I don't know. You lost your yacht.
PALMERDALE: Insured.
DOCTOR: What about the rest of the crew? Were any other boats launched?
SKINSALE: We didn't wait to see. His Lordship was in rather a hurry to leave the sinking ship.
PALMERDALE: It's imperative that I reach London before the market opens.
SKINSALE: Oh, is that the reason
DOCTOR: Ah, you want to get to London?
PALMERDALE: Yes! Yes.
DOCTOR: You've no chance in this fog.
SKINSALE: The wheel of fortune, eh, Henry?
PALMERDALE: What?
SKINSALE: Perhaps you didn't win all you thought at the casino.

Arguments ensue leading to Harker attaching Palmerdale when the latter tries to force him to cooperate:

PALMERDALE: Harker, get off!
SKINSALE: Don't be such a damn fool, man. Harker!
DOCTOR: Let go, Harker!
HARKER: There are good seamen dead because of you! You deserve to die!
DOCTOR: Come on, sit down. Sit down. All that can wait. Gentlemen, I've got news for you. This lighthouse is under attack, and by morning we might all be dead. Anyone interested?

But that line of the Doctor's there is superb, love it, just cuts through their squabbles to what actually matters!

One of the newcomers to the lighthouse has previous & future form on the series: Playing James Skinsale is Alan Rowe who was previously in The Moonbase as both Dr. Evans & the Space Control voice and then The Time Warrior as Edward of Wessex. He'll be back in Full Circle as Decider Garif. His IMDB entry shows he was a much in demand actor, though I confess Doctor Who is the only thing I've seen him in. He was the partner of actor Geoffrey Bayldon who speaks about Rowe and their relationship during Whos' Round #117. 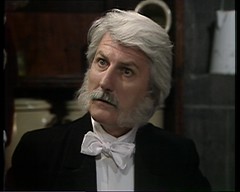 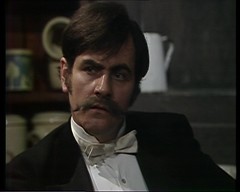 His secretary, and I'm tempted to use inverted commas round that word, Adelaide Lesage is played by Annette Woollett. Director Paddy Russell would later reuse her on Emmerdale Farm alongside former Doctor who companion Frazer Hines. 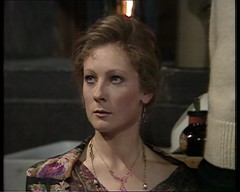 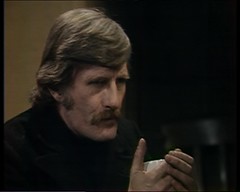 Coxswain Harker is played by Rio Fanning. He's got a Blake's 7 to his name playing Captain Deral in Children of Auron but you might have also seen him as Father Frost in Father Ted: Old Grey Whistle Theft. Toby Hadoke interviews him in Who's Round 67.

And, for completeness, you can hear the author of this story interviewed in Who's Round 55!