465 Image of the Fendahl: Part Four

"The Fendahl is death. How do you kill death?"

The Doctor blasts the Fendahleen monster with John Tyler's shotgun filled with rock salt enabling them to escape. Thea is transformed into a glowing gold being. She consumes the cult, turning them into small Fendahleen monsters. The Doctor & Leela free Colby but are unable to save Stael who is beginning to transform but he kills himself with his gun, preventing Thea's complete transformation. The Doctor deactivates the scanner. Mrs Tyler seeks out salt for the Doctor, with Jack loading some into his cartridges. The Doctor tells Colby of how the Time Lords destroyed the fifth planet to kill the Fendahl but it had already travelled to Earth, possibly via Mars, and had effected mankind's evolution. Leela & Jack destroy a Fendahleen that approaches the lab. The Doctor sends Jack & Ma Tyler away. The Doctor has Colby run the scanner for two minutes and leave, having set it to self destruct three minutes later. He & Leela venture into the cellar, armed with salt to protect them from the Fendahleen. They seize the skull, placing it in a radiation proof box, and flee the house, subjected to psychic assault by the Fendahl core. A huge explosion consumes the house, the Fendahl core and the remaining Fendahleen. The Doctor takes the skull and dumps it into a star going supernova.

Huzzah, that was a bit more like it. Things finally get going with a bit of action, some humour between Colby & the Tylers (I can see young Rusty D sitting at home and thinking "oooh, that's a good surname!") and it just worked.

Stael's death, at his own hand to prevent him becoming part of the Fendahl, stuck with me as a child reading the book:

STAEL: Help
DOCTOR: Come on. Come on. It's too late. You've seen her eyes.
STAEL: The gun.
DOCTOR: What?
STAEL: Give me the gun.
DOCTOR: It won't have any effect on her.
STAEL: It's on the altar. It's not for her. It's for me.
DOCTOR: I'm sorry.
STAEL: Thank you.

Stael in many ways brought his death on himself by tampering with forces he did not understand. Thea Ransome on the other hand is very much an innocent victim here:

DOCTOR: What's in the cellar is the Fendahl, the gestalt.
TYLER: The what?
COLBY: A gestalt is a group creature. It's made up of separate parts, but when they join together they make a new and much more powerful creature.
TYLER: He reads a lot, you know.
DOCTOR: Shush. Got it. According to the legends of Gallifrey, and the superstitions of this planet, it's fairly certain that the Fendahl is made up of twelve Fendahleen and a core.
COLBY: Thea. 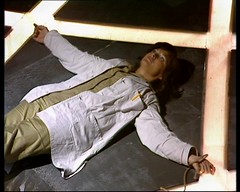 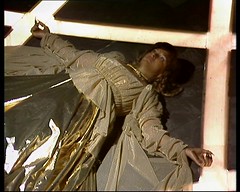 DOCTOR: Well, yes, what was Thea. It's no longer Thea no more than. I killed one, and Stael shot himself. There are only ten left.
LEELA: Are you saying the Fendahl is not yet complete?
DOCTOR: Yes, we've still got a chance 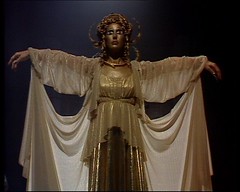 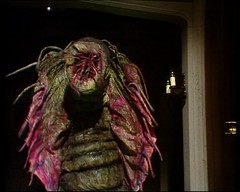 COLBY: Did you say that about twelve million years ago, on a nameless planet which no longer exists, evolution went up a blind alley?
DOCTOR: Yes.
COLBY: Natural selection turned back on itself and a creature evolved which prospered by absorbing the energy wavelengths of life itself?
DOCTOR: Mmm.
COLBY: It ate life? All life, including that of its own kind?
DOCTOR: Yes. In other words, the Fendahl. And then the Time Lords decided to destroy the entire planet, and hid the fact from posterity. They're not supposed to do that sort of thing, you know.
COLBY: So when the Time Lords acted, it was too late. The Fendahl had already come here.
DOCTOR: Yes, probably taking in Mars on it's way through.
COLBY: Then it got itself buried, but not killed.
DOCTOR: The Fendahl is death. How do you kill death? No, what happened was this. The energy amassed by the Fendahl was stored in the skull and dissipated slowly as a biological transmutation field. Now, any appropriate lifeform that came within the field was altered so that it ultimately evolved into something suitable for the Fendahl to use.
COLBY: Are you saying that skull created man?
DOCTOR: No, I'm saying it may have effected his evolution. 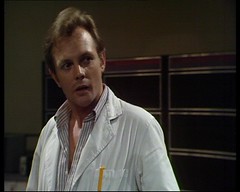 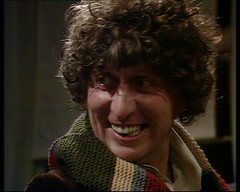 DOCTOR: That would explain the dark side of man's nature. But it's just a theory.
COLBY: A pretty wild one.
DOCTOR: It's more fun that way.


DOCTOR: Almost there. Oh, if you want an alternative explanation, the Fendahl fed into the RNA of certain individuals the instincts and compulsions necessary to recreate. These were fed through the generations till they reached Fendelman and people like him.
COLBY: Well, that's possibly more plausible.
DOCTOR: Or on the other hand, it could all be just a coincidence. Finished.

Unfortunately we get another alien race possibly affecting human evolution like the Daemons. Did the Chronovore Kronos, in The Time Monster, do it too? They'll be another along shortly in the form of Scaroth in City of Death!

Remember the countdown provided by the power usage and then abandoned last episode? We get a proper countdown here!

DOCTOR: Perfect. Right, now this is what I want you to do. Give Leela and me time to get down to the cellar, and then switch on the scanner beam. With luck it should confuse things down there long enough for us to grab the skull and get away.
COLBY: Well then what?
DOCTOR: Listen. This is important. Be sure to operate the scanner beam for only two minutes, then switch if off and you go.
COLBY: But why?
DOCTOR: Because I've rigged that to set off a controlled implosion three minutes after you switch off the scanner. We need three minutes to get clear.
COLBY: A big bang?
DOCTOR: Pretty big. Big enough to blow this place to atoms.
LEELA: Then why don't we leave the skull here?
DOCTOR: Oh no, too dangerous. It could pop up anywhere and start the whole thing over again. Come on.
LEELA: Good luck.
DOCTOR: Psst. Remember, three minutes.

And a nice big bang at the end of it too!

I'm trying to work out why I don't like this story so much and I'm pretty certain it's down to the occult trappings involved which just don't sit well with me. In past viewings I just didn't engage with the first three episodes that well. I'm also not 100% sure it was a good idea to remove K-9 just after introducing him, setting a rather bad precedent: Power of Kroll, Destiny of the Daleks, City of Death and the Leisure Hive !!!!! 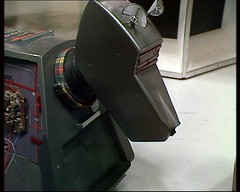 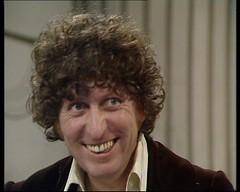 Image of the Fendahl is the first Doctor Who directing job for George Spenton-Foster but it's the last script for the series from Chris Boucher who would go on to script edit Blake's 7 and create Star Cops. It's also the last serial script edited by Robert Holmes although the following story The Sunmakers, which was written by Holmes himself, was made before this one. He'll continue to contribute scripts to the show right up until his death in 1986.

Image of the Fendahl was novelised by Terrance Dicks and I have distinct memories buying it on a holiday to Littlehampton when I was younger. It was released on video in March 1993 and on DVD in April 2009.