"Perhaps everyone runs from the tax man?"

On the human colony on the planet Pluto citizen Cordo hears of his father's death but when he goes to pay the death taxes he finds he hasn't enough money. In despair he goes to throw himself off a tower block but is prevented from doing so by the arrival of the Doctor & Leela. He tells them how the company runs the planet, are responsible for the artificial suns and tax the population to death. The Tardis is detected and the Gatherer investigates with the Doctor, Leela & Cordo fleeing to the under city, where Cordo goes to join a group of outlaws. They are captured and taken to the group's leader Mandrel. K-9 exits the Tardis and is detected by the Gatherer. The Doctor is sent to use a stolen Consumcard, with the threat that if he's not back within a certain time they will kill Leela. K-9 finds the Doctor & Cordo but the stolen Consumcard is detected and the Doctor is gassed. 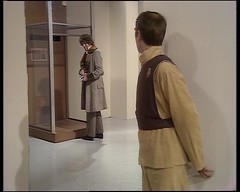 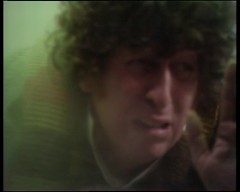 Ah now that's just fabulous, really is. For a episode that opens with someone's father dying....

HADE: Is this your account, Citizen? I see you selected the golden death, with four mercy attendants.
CORDO: Yes, your honour. I always pledged that when his death day came he would not suffer.
HADE: Compassion is a noble thing, Citizen. Also costly. A hundred and seventeen talmars.
CORDO: One hundred and seven? No, it can't be.
HADE: See the account.
CORDO: But there's a mistake. Eighty, they said. Eighty for the golden death.
HADE: The Collector recently raised death taxes seventeen percent.
CORDO: I didn't know, your Honour.
HADE: It was bulletined.
CORDO: But I didn't see it.
HADE: It is every citizen's duty to know the tax rates.
CORDO: I've been working double shifts to earn the money.
HADE: Four mercy attendants is now a further eighteen talmars. Disposal fee ten talmars plus of course an ad valorum tax of ten percent. Total one hundred and thirty two talmars. It's all here, you see, and said we put your father's personal contribution of seven talmars. Only seven talmars, Citizen? Must have been a poor man.
CORDO: He was a municipal servant for forty years, your Honour. He cleaned the walkways.
HADE: And then there's the recycling allowance on his death weight of eighty four kilos. That is eight talmars. Leaving a debt of a hundred and seventeen.
CORDO: Please, I have only eighty six. It has taken me years to save it.
(Hade picks up the pouch by its strap with his long staff of office.)
HADE: How do you propose to settle the thirty one talmars outstanding?
CORDO: Well, I can't. Your Honour, I have nothing.
HADE: Taxes are the primary consideration, Citizen. I see that you are a D grade worker in the Foundry.
CORDO: Yes, your Honour.
HADE: Fortunately, as the Gatherer, I have certain powers. I will encourage your supervisor to allow you increased output.
CORDO: But, your Honour, I already work a double shift now! I have only my three hours sleep time away from the Foundry.
HADE: Twenty one hours a week. You must manage without sleep time until the debt is paid.
CORDO: It will kill me!
HADE: Take your Q capsule.
CORDO: But your Honour, the high medical tax on Q capsules!
HADE: Citizen Cordo, you complain too much. Thank the Company you're warm and fed.
CORDO: Praise the Company.
HADE: You may go.

CORDO: Then there's the medical tax on Q-capsules, and work tax on extra hours, so I could never clear the debt. You see, the Company charges fifty percent compound interest on unpaid taxes. I'm only a grade D work unit, three talmars a shift. Three talmars. That's not enough.
LEELA: What is he saying, Doctor? I do not understand.
DOCTOR: He can't make ends meet. Probably too many economists in the government.
LEELA: These taxes, they are like sacrifices to tribal gods?
DOCTOR: Well, roughly speaking, but paying tax is more painful.
LEELA: Then the people should rise up and slaughter their oppressors!
DOCTOR: Well, if little Cordo's at all typical, they haven't any spirit left for fighting.

...then followed up by a bit of cashpoint fraud, it rolls along at a nice pace and is bright and funny. Of particular note is Richard Leech's fabulous performance as the Gatherer. As he & Marn find the Tardis and speculate on why it's here it forms a perverse commentary to the story.

MARN: How did it get here?
HADE: Oh, use your intelligence, Marn. We detected an air space violation. Clearly a sky freighter.
MARN: But what is it, your Honour?
HADE: Obviously a container. See the lock?


HADE: It's an intriguing case, Marn.
MARN: Your Honour, it's inconceivable. To flout so many regulations.
HADE: Exactly. I smell something very big. Perhaps another Kandor conspiracy.
MARN: What was that?
HADE: Oh yes, Kandor.
MARN: I never heard of it.
HADE: Yes, it wasn't made public at the time in case it gave others ideas. Kandor was an executive grade in Megropolis Four who falsified computer records for the enrichment of himself and his fellow conspirators. Altogether he defrauded the Company of millions of talmars.
MARN: Praise the Company. What happened to him?
HADE: He survived three years in the Correction Centre.
MARN: Three years? A record.
HADE: He was very strong.


MARN: I can easily trace the delivery and freighter records.
HADE: Whatever programme the freighter used will self destruct in print.
MARN: You mean the instruction will not be retained in records? But that's another illegal
HADE: Does the robber hesitate to break a window? We're not dealing here, Marn, with some snivelling tax defaulter. This is a carefully planned criminal enterprise.
MARN: To what end, your Honour?
HADE: To defraud the Company of its rightful revenues by smuggling contraband goods into the Megropolis. I see the magnitude of the offence astounds you.
MARN: Well, it's hard to believe such depths of criminality.
HADE: It exists, Marn. It exists. Despite the screening and the Preparation Centres and the air conditioning, criminal deviants occur in every generation. Enemies of the Company. On old Earth they had a saying. There's one rotten acorn in every barrel. We must find this filth, Marn. Find it and crush it.
MARN: The Company be praised. How should it be done?
HADE: I have a plan.

I'm reminded somewhat of Paul Whitsun-Jones in the Mutants. There the character was nasty and malicious, here it works. 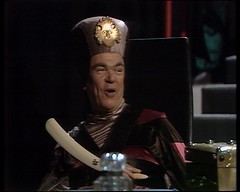 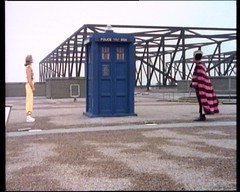 I'd not seen Richard Leech in anything else until quite recently when I saw him playing Uncle Harry in the 5th episode of Smiley's People. He featured in the BBC production of Paul of Tarsus, alongside Patrick Troughton as Paul, where he played James of Nazareth. I've never seen Jonina Scott, Marn, in anything else.

I saw the cash machine at the end of this episode and thought "isn't 1977 a little early for cash machines?" A little research reveals the first one was used in the UK in 1967! The design for the consumcard owes something to the Barclaycard, then coming into popular use in the UK. 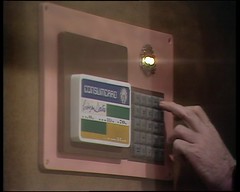 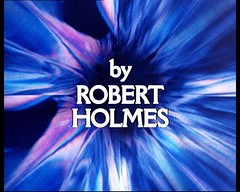 A couple of notes on the end credits: firstly there's no script editor credited because Robert Holmes is the writer of this story. Holmes apparently wrote this story following a particularly nasty encounter with the taxman! I also see a first visual effects credit for Peter Logan who I believe to be the same Peter Logan who appears with his exploding paste on Braniac Science Abuse

As we previously said the production order for this season was vastly different from the transmission order. Sunmakers was recorded third, after Horror of Fang Rock (broadcast first) and before Image of the Fendahl (broadcast third, before this story). Apparently Sunmakers was due to be broadcast third but someone realised that meant there were two "humans in space" stories on the trot so it was swapped with Image of the Fendahl.

DOCTOR: It's that confounded paint. It's always jamming things up. Stay calm. I'm going to materialise and take a reading.
LEELA: Where are we?
DOCTOR: We're still in the Solar System. Pluto?
LEELA: Pluto?
DOCTOR: Yes, Pluto.
K9: Ninth planet. Was until the discovery of Cassius believed to be the outermost body in the system. It has a diameter of three thousand

Having been to Saturn's moon Titan in Invisible Enemy we now find ourselves on Pluto, but not Pluto as we'd know it and as New Horizons has visited.

DOCTOR: I'm interested in this Undercity. Always like to get to the bottom of things.
LEELA: Come on. CORDO: But you don't understand, Citizens. My father looked in once. He said there is no light, nothing. It is not possible to imagine such a thing.
LEELA: You mean it is dark.
CORDO: What is dark?
LEELA: Well, at night, when the sun has gone.
DOCTOR: He means there's no night on this planet, Leela. That's why the concept of darkness frightens him.
LEELA: But that is not possible. Every planet must have a night.
DOCTOR: Not if the sidereal and axial rotation periods are the same, or if there's more than one sun.
CORDO: There are six.
DOCTOR: What, six suns on Pluto?
CORDO: Well, everyone knows that. Each Megropolis was given its own sun.
DOCTOR: In-station fusion satellites. Galileo would have been impressed.

It's quite possible that my earliest memory of Doctor Who, of the Doctor meeting K-9 in a tunnel, comes from this episode. 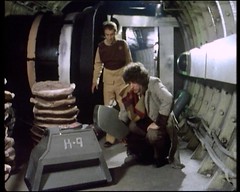 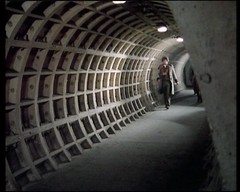 The round tunnels with the odd wall structure are part of Camden Town Deep Level Shelter in London. Another Deep Level Shelter, at Goodge Street, serves as the fictional location for the army headquarters in Web Of Fear. Meanwhile The former Wills Tobacco Factory in Bristol provides the building top location seen in this and other episodes. 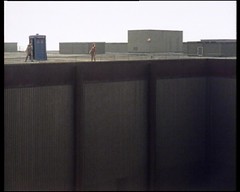 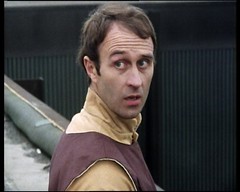 I didn't think I'd seen Roy Macready, playing Cordo, in anything else. His CV included the 13th episode of Rentaghost series 7, which I probably saw as a child. I then discovered he played building supervisor android 80H in Luna, a little remembered ITV Children's sit com devised by ex Monkee Micky Dolenz!

The three returnees from Face of Evil, regulars though they are, might be down to that story's director, Pennant Roberts, also durecting this tale.

Three more extras appear in this episode according to IMDB who we don't see do often: Barbara Bermel is a Rebel in tunnel: she'd been a Villager in Planet of the Spiders, an Android Villager in The Android Invasion, a Masquer in The Masque of Mandragora part four and a member of the Sevateem in The Face of Evil. She'll be back as a Court Lady in The Androids of Tara and a Lazar in Terminus. Elsewhwere she was a Woman in Doomwatch: Flood, a German Woman in Fawlty Towers: The Germans, and a Thulian in Space: 1999: Death's Other Dominion, which also features Adrienne Burgess, who plays Veet.

David Cleeve is An Other, one of the rebels in the tunnel. He'd been a UNIT Soldier in The Time Warrior part one, an Ice Warrior in The Monster of Peladon, a Thal Soldier in Genesis of the Daleks, a Radation Suit Man in The Hand of Fear part and returns as a Deon Guard in Meglos.

Kelly Varney is an Extra, again possibly one of the rebels. He'd been a Spiridon in Planet of the Daleks and an Army Soldier in Invasion of the Dinosaurs. He's in Blake's 7 as a Prisoner in Project Avalon, presum,ably the one who is used as the test subject, and a Native in Horizon. He's in another Terry Nation series too appearing as Tom Walter in Survivors: Bridgehead and as a Technician in Moonbase 3: Castor and Pollux.