"That's what the Centre's for, correcting people. He won't live long after that!"

My list of episodes tells me this is Tom Baker's 86th episode, which is half way through the number of episodes starring him broadcast!

Cordo flees as the unconscious Doctor is taken away to the correction centre. The Gatherer takes his suspicions of rebellion, sparked by the Tardis' arrival, to the Collector. The Doctor recovers finding himself in a straight jacket with fellow prisoner Bisham. As Leela's time runs out Cordo returns and tells the outlaws what happened. Bisham explains to the Doctor about PCM being pumped into the atmosphere, which he believes eliminates airborne infections. The Doctor recognises it as an anxiety inducing agent. Leela & Cordo go, with K-9, to free the Doctor. The Doctor is freed by the Gatherer who believes he can use the Doctor to find the rebels. On the way to the correction centre Leela starts to feel afraid but K-9 informs her of the presence of the gas interfering with her nervous system. They break into the correction centre but finding the Doctor gone they free Bisham. The Doctor returns to the undercity and is angry that Leela has left to try to find him, but worried by his reappearance with money they threaten him and accuse him with being a spy for the Gatherer. Attempting to escape the correction facility Leela, Cordo, Bisham & K-9 are found by guards..... 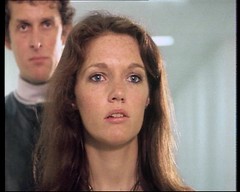 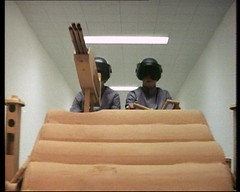 Love it, love it, love it. Rolls along nicely, Tom's superb, the "greek chorus" commentary provided by The Gatherer & Marin is on completely the wrong track and is barkingly amusing.

HADE: Ah, Citizen Doc-Tor. Welcome. Come in, sit down.
DOCTOR: Thank you.
HADE: No, no, no. Please, please.
HADE: Citizen Doc-Tor. An unusual name.
DOCTOR: Yes, especially for an Ajack.
HADE: Indeed. There are so many Wurgs and Keeks in Megropolis Three I sometimes wonder how my distinguished colleague, Gatherer Pile, manages to keep track of you all.
DOCTOR: Indeed. But how very clever of you to know my name.
HADE: Well, it's here, on your ConSumCard.
DOCTOR: Ah.
HADE: The cause of your unfortunate experience, of which I trust there are no ill effects?
DOCTOR: Oh, not at all, not at all. Your guards were entirely charming, and so attentive.
HADE: I am gratified. I brought you here, Citizen Doc-Tor, first of all to give you the thousand talmars you requested.
HADE: And also to apologise for any inconvenience. To err is computer.
DOCTOR: To forgive is fine?

I'd heard this scene loads of times but had never twigged the Gatherer Pile/Gather a pile (of money) joke till Doctor Who Magazine's Fact of Fiction drew my attention to it. 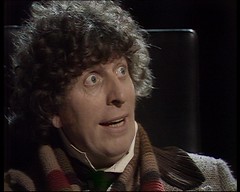 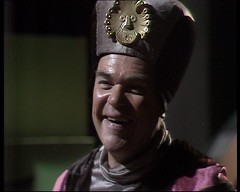 CORDO: The guard, he's gone!
LEELA: We should have killed him. He will have raised the alarm.
BISHAM: Well, there's no turning back.
CORDO: If we're caught in this corridor, we'll have no chance, Leela.
LEELA: What do you suggest?
CORDO: We must be daring. If we take the P45 return route they'll never expect to find us there.

The P45 gag was slightly more obvious though! Once again the The former Wills Tobacco Factory in Bristol provides locations for this episode, in this case the long corridor, presumably the P45 route mentioned above, seen in the episode's close! 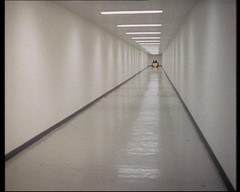 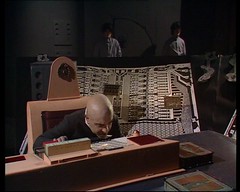 Look carefully at the circuit board pattern in the Collector's office & the Correction Centre: it's traced from a real circuit board and there's an AMD logo clearly visible! 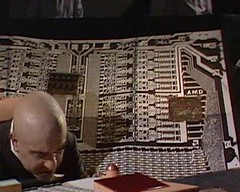 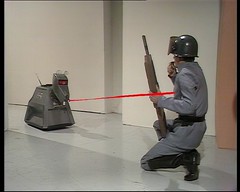 The same Doctor Who Magazine article mentioned above identifies the Correction Centre Guard who is shot by K-9 as Cy Town: he's been a Technician in Doctor Who and the Silurians, a Medical Orderly in The Mind of Evil, an Extra in Invasion of the Dinosaurs, a Vogan in Revenge of the Cybermen and a Brother in The Masque of Mandragora and a Bi-Al crewman in The Invisible Enemy as well as being a Dalek Operator in Frontier in Space, Planet of the Daleks and Genesis of the Daleks. He'll repeat that role in Destiny of the Daleks, Resurrection of the Daleks, Revelation of the Daleks and Remembrance of the Daleks as well as appearing as a Passerby in Attack of the Cybermen, Harold V.'s Brother in The Happiness Patrol and a Haemovore in The Curse of Fenric. He was in Doomwatch playing a man in Flood and a Technician in all six episodes of Moonbase 3. 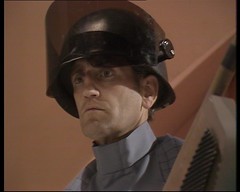 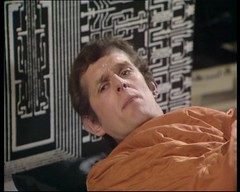 The Doctor's fellow prisoner, Bisham, is played by David Rowlands who was the Hairdresser in The Hitchhiker's Guide to the Galaxy episode 6!

DOCTOR: Going for a little hop. Good for the circulation. What did they get you for?
BISHAM: Curiosity.
DOCTOR: That's a crime here?
BISHAM: Yes. I was an executive grade at the chemical plant in charge of PCM production. I got curious about some of the other products.
DOCTOR: Go on.
BISHAM: Well, there were some tablets labelled For Official Use only, for the Gatherers and the other Company staff. I wondered what they were, so I took some.
DOCTOR: Ah.
BISHAM: I felt completely different, as though I'd never really been alive until then.
DOCTOR: So you carried on taking them?
BISHAM: Of course I did. I suppose they noticed the difference in me and kept watch. The MegroGuards came for me during my last sleep time.
DOCTOR: What does PCM stand for?
BISHAM: Pentocyleinicmethylhydrane.
DOCTOR: What?
BISHAM: You know something about chemistry?
DOCTOR: Enough to recognise an anxiety inducing agent when I smell one.
BISHAM: No, no, it eliminates airborne infections.
DOCTOR: That's what they tell you. It also eliminates freedom.

Gas released into the air to control the populace? Did Chris Boucher give Bob Holmes a sneak peak at the script of the soon to be transmitted Blake's 7 episode 1: The Way Back?

In fact this is the last Doctor Who story to be transmitted before Blake's 7 started.

And speaking of which, Ladies and gentlemen: Mister Michael Keating, here playing Gourdy, is the only actor to appear in every episode of Blake's 7, where he plays Vila. He's got a missing Doomwatch to his name, playing Stephen Grigg in Enquiry, which was directed by Pennant Roberts, and a Yes Minister playing Constable Ross in The Death List, towards the end of his Blake's 7 fame. Nowadays he's more recognisable for his occasional appearances in East Enders as Reverend Stevens. 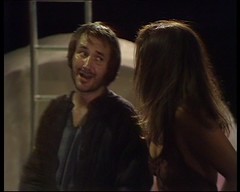 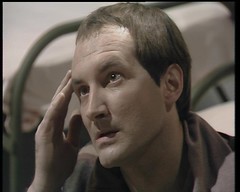 So it's a very good time for the third of our regular looks at the Blake's 7 cast & crew to see who we recognise. Still at the helm as producer & script editor are David Maloney, in his final season, and Chris Boucher. This is the first series without Gareth Thomas as Blake.

DIRECTED BY: Desmond McCarthy
WRITTEN BY: Allan Prior
BROADCAST ON: 21/01/1980


EPISODE: C4 Dawn of the Gods

DIRECTED BY: Desmond McCarthy
WRITTEN BY: James Follett
BROADCAST ON: 28/01/1980


EPISODE: C5 The Harvest of Kairos


EPISODE: C6 City at the Edge of the World

DIRECTED BY: Vere Lorrimer
WRITTEN BY: Chris Boucher
BROADCAST ON: 11/02/1980

DIRECTED BY: Andrew Morgan Directed Time and the Rani and Remembrance of the Daleks.
WRITTEN BY: Roger Parkes
BROADCAST ON: 18/02/1980

No Doctor Who cast involved.

No Doctor Who cast involved.

It'll be a while before the final one of these comes up during the Two Doctors!