"Nobody understands business is business!"

The Doctor escapes just in time but Mandrell calling his communicator alerts the Collector & Gatherer to his presence and they send guards to investigate. Bisham reports that the PCM levels are falling dramatically. The Doctor decides to infiltrate the Collector's palace and take control of the public video system. The Collector is agitated at the reports of unrest. Once in the palace the Doctor opens the Collector's safe, but Leela accidentally triggers a booby trap and is stunned. The Doctor broadcasts his message to the Megropolis. Marn is found by the revolutionaries and elects to join them. The Gatherer finds workers on the rooftop of his building but they throw him off it and he falls to his death bellow. The Doctor confronts the Collector who tells him the company, based on the planet Usurius. He recalls that Usurians are a sort of poisonous fungi. The Collector tells how the moved the humans from the Earth, to Mars and then to Pluto. When Pluto's resources are exhausted Pluto and the humans will be abandoned. When the revolution nears the Collector's palace he prepares to release a poison into the atmosphere but is stopped by the Doctor & Leela. The Doctor feeds a growth tax into the Collector's computer forcing him to revert back to his true form and giving the people control of the city.

And all over in a bit of a rush with very little opposition. Indications are, especially given the scene where everyone is running around everyone yelling for K-9, that this episode might have been running a little short. In many ways it's quieter then the others but still has the same levels of humour: Liz joined me for it and was giggling at some of the bits where when she'd watched the story previously she hadn't liked it. The long confrontation between the Doctor & The Collector is especially fun, and explains a lot of the questions about what the company are and how the humans got to Pluto: 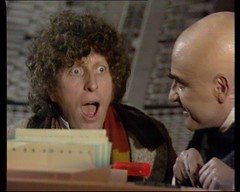 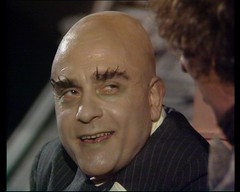 COLLECTOR: Kindly make less noise.
DOCTOR: Oh, I was just checking the books.
COLLECTOR: Your appearance is not unexpected.
DOCTOR: I'm not the Auditor, I'm the Doctor.
COLLECTOR: I know. If you intend to kill me, as you see, I'm unarmed.
DOCTOR: No, I won't kill you. Just close you down.
COLLECTOR: An idle boast. Other competitors have tried. Would you care to see our prospectus?
DOCTOR: Oh, delighted, delighted. Hmm. Company solidly based. You've a widely diversified operational field. Yes.
COLLECTOR: You're a fool, Doctor. I shall have you steamed for your interference.
DOCTOR: Yes, I cut the answering service not to interrupt our little conference.
COLLECTOR: Very well. I see I underestimated you. What are your terms?
DOCTOR: Tell me about the Company.
COLLECTOR: Ah, you're interested.
DOCTOR: Yes.
COLLECTOR: Oh, an excellent outfit to work for, Doctor. Progress from medium to senior management level can be remarkably rapid for the talented executive.
DOCTOR: Yes, cut the sales talk. Where's the Head Office?
COLLECTOR: Usurius.
DOCTOR: Ah. I might have guessed from your squiddy little eyes. Hmm.
COLLECTOR: You are acquainted with our species?
DOCTOR: Oh yes, oh yes. The Usurians are listed in Professor Thripsted's Flora and Fauna of the Universe under poisonous fungi.
COLLECTOR: I don't entirely like your attitude. If you want to get on in the Company you have to what? What? Are you mad?
DOCTOR: Quite mad. Mad as a hatter. Tell me, how did you get control of humanity?
COLLECTOR: A normal business operation. The Company was looking for property in this sector, Earth was running down, it's people dying. We made a deal.
DOCTOR: Go on.
COLLECTOR: Yes. We moved them all to Mars. After our engineers had made that planet habitable for their species.
DOCTOR: And then taxed the life out of them. I mean, to recover your capital costs.
COLLECTOR: Quite so, quite so. Then, when the resources of Mars were exhausted in their turn, we created a new environment for them here on Pluto.
DOCTOR: Phew. What about the four intervening planets?
COLLECTOR: They weren't considered viable by our engineers.
DOCTOR: So then you really put the screws on. I mean, the running costs must be very high.
COLLECTOR: Six suns to be fueled and serviced.
DOCTOR: Six suns. Six! My, my. And so when this planet's exhausted you can move your slave labour force elsewhere?
COLLECTOR: Alas, no. There is nowhere else that is economic. This branch will close.
DOCTOR: Leaving the humans to die.
COLLECTOR: When the suns have run down, yes. A matter of a few years without fuel. They're not a good workforce in any case. Many of our other operations produce a much higher return with less labour.
DOCTOR: You blood-sucking leech! You won't stop until you own the entire galaxy, will you. Don't you think commercial imperialism is as bad as military conquest?
COLLECTOR: We have tried war, but the use of economic power is far more effective.
DOCTOR: You
DOCTOR: Ah. The revolution's getting nearer. What's the Company policy on that?
COLLECTOR: It will be quelled. Business will continue as usual.
DOCTOR: Oh, wake up. Wake up. Look at the facts.

This wakes up a guard the Doctor has previously hypnotised who looks suspiciously like stuntman & supporting artist Stuart Fell! 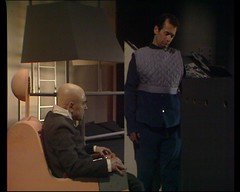 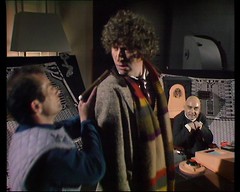 COLLECTOR: I know the facts.
DOCTOR: You and a handful of bureaucrats won't put the people back in chains now.
COLLECTOR: Then they will die.
DOCTOR: Oh, it's you again. What did I say?
COLLECTOR: Our conference has gone on too long, Doctor. It is time to implement contingency plan A.
COLLECTOR: This switch controls the sprinkler valves throughout the City.
DOCTOR: Rain stops play. I don't think that'll damp down this revolution.
COLLECTOR: The sprinklers will release dianene, a deadly poison. Within ten seconds, everyone in the City will be dead.
DOCTOR: Except you.
COLLECTOR: Exactly. I do not breathe air.
DOCTOR: No, but this chap at my shoulder, he breathes air.
COLLECTOR: Kill him!
DOCTOR: Don't be a fool.
COLLECTOR: Guard, kill him!
DOCTOR: Good throw! Good throw.

Leela's thrown her knife at the guard, hitting him.

Fab effect here as the Collector shrinks, becoming a green blob that disappears down the plug hole under his chair: 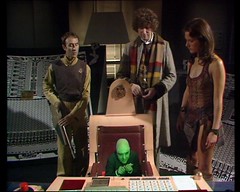 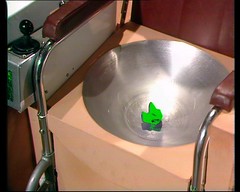 BISHAM: I'm sorry I'm late. What happened?
MANDRELL: Well, I don't know.
DOCTOR: I do. He's gone back to his natural form. He was only held in that state by particle radiation. That's why he never left that machine.
LEELA: You mean he's in there now?
DOCTOR: Oh, yes.
LEELA: Well, we could make a hole in it.
CORDO: Do you think he'll come out again?
DOCTOR: Well, you could put the plug in if you want.
COMMANDER: I don't understand. Why was it necessary for him to make himself look human?
DOCTOR: Well, if you'd seen a Usurian you'd know what I mean. They look like sea kale with eyes. I mean, would you take orders from a lump of seaweed? Huh? Hmm? Cordo?

Of the other two Company officials seen in the story, Gatherer Hade meets his fate at the hands of a mob who throw him off a roof! 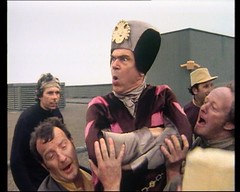 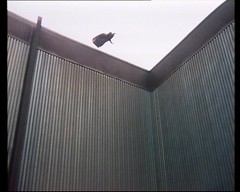 Richard Leech giving it his full range of Frankie Howard face pulling there. He's been a top turn throughout this story!

Hade's assistant Marn has looked cleverer than her boss throughout and correctly reads the situation, throwing in her lot with the rebels!

Meanwhile I spot a reference to an earlier Holmes Doctor Who story:

LEELA: Doctor! What is this?
DOCTOR: What, that? It's a safe. Company vault.
LEELA: Doctor, is there
DOCTOR: Shush.
LEELA: Is there something behind the door?
DOCTOR: What was that?
LEELA: I heard nothing.
DOCTOR: Neither did I.
LEELA: Then why are we whispering?
DOCTOR: I always whisper when I'm opening safes.

The Doctor's safe cracking was last seen in Terror of the Autons. This time there's just an energy field waiting for them, then it was a whole Auton folded up in the safe!

There's not a lot of returning actors credited in this story: just Tom Kelly, who plays a Guard in the next episode. He was also a Guard in the Doctor Who serial The Face of Evil and will be a Vardan in The Invasion of Time. He was in the Blake's 7 episode Spacefall as Nova, both of which are directed by this story's director Pennant Roberts. He also appears in Sapphire & Steel The Railway Station as the Soldier / Sam Pearce. You can hear him interviewed by Toby Hadoke in Who's Round 158.

Uncredited in this episode is frequent supporting artist Barry Summerford as a Steaming Audience Member. We last saw him in The Hand of Fear as a Security guard and he's next seen in the The Ribos Operation as a Shrieve.

Not exactly your average Doctor Who story at all, much more light and humorous than many. But it works, especially coming as it does after the very dark Image of the Fendahl. I loved it and thought it was great fun. The story came about as a result of an encounter between Robert Holmes and the tax man. Holmes certainly seems to take great joy in humorously pointing the finger at the tax system during it.

There's also an element of our departed script editor pointing the finger at his employers, with the company seen as an allegory for the BBC! A sly hint at this can be seen with the revolving globes during the public video system announcement, very similar to the BBC idents at the time! 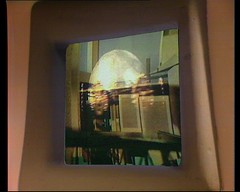 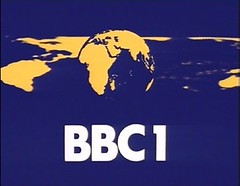 After Sunmakers Doctor Who took it's now traditional Christmas break during which Robots of Death was repeated as two fifty minute compilation episodes. This was the last time there would be Doctor Who repeats at Christmas breaking a tradition that stretched back to the Daemons in 1971.

The Sunmakers was the last Tom Baker story to be novelised, inevitably by Terrance Dicks, in 1982. That left three stories in his reign un-novelised and we'll come to the first of these very shortly. It was released on video in 2001 and on DVD in August 2011.