"The Quest is The Quest!"

The Tardis stops on the edges of the cosmos where K-9 detects a spaceship nearby. Narrowly escaping a nebula that is sucking them in they materialise on the ship which the Doctor establishes is from Minyos. The Time Lords actions on Minyos, which led to the populace destroying their planet, led to the Time Lord policy of non interference. On the flight deck the aged Tala is injured as the ship is sucked into the nebula. The Doctor arrives and is attacked by Herrick. Leela goes to attack him but is stopped by the crew's pacifier ray. Tala is taken away to regenerate. They have been tracking a missing ship, the P7E which is carrying the future of their race. They have been on this quest for 10,000 years, regenerating many times. K-9 takes control of the ship and steers it out of the nebula. He reactivates many of the damaged systems, and the restored tracking system locks onto the P7E. They locate the ship in the nebula which the Doctor believes formed round her. They enter the nebula, but the weight of the ship attracts rock to it's hull dramatically increasing it's weight. They use the laser cannon to try to burn their way out but it starts to disintegrate

Slow and boring. Ugh. In some ways it reminds me of those Troughton episodes which attempt to show off the reality of working in space. But there is some nice stuff in here: The ship looks nice, even if I can't get a clear screenshot of all of it this episode, as do the shots of the rocks building up round it.

JACKSON: If that's where P7E is, that's where we go.
DOCTOR: But that could mean destruction.
JACKSON: No, Doctor, it'll mean the end of the Quest. If P7E went in there, so can we.
DOCTOR: But P7E didn't go in there. She couldn't have! She must have been there at the beginning and the nebula formed around her.
HERRICK: How does he know that?
DOCTOR: It's elementary physics. The still centre of a raging storm. P7E might be in there and she might be safe, but if you go in after her, it could mean destruction.
JACKSON: Doctor, if P7E is there, we must find her. That is our purpose. Destruction is a chance we take. The Quest is the Quest.

JACKSON: Main systems functional. Then why aren't we moving?
DOCTOR: Don't you know? What's the normal hull thickness?
JACKSON: Three metres twenty.
DOCTOR: K9! Present hull thickness?
K9 [OC]: Hull thickness seventy metres, increasing.
JACKSON: Seventy metres!
DOCTOR: We're being turned into a planet.
JACKSON: But that's impossible!
DOCTOR: No, it's not impossible, Jackson. It's simply gravity. This ship's a large, heavy object surrounded by smaller, lighter, objects. Our gravitational pull is greater than theirs. We attract them. They stick to us. It all snowballs.
K9 [OC]: Eighty metres, increasing.
DOCTOR: We're being buried alive. If it wasn't for this layer of debris, the asteroid belt would have smashed us to pieces. Still, you can't have everything, can you.

The theory behind that is scientifically sound too: Accretion Theory is how planets are believed to be formed and Doctor Who returns to this idea in the Christmas Invasion. For more buy The Planets on DVD. 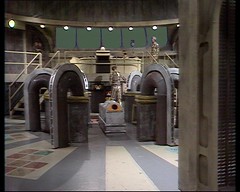 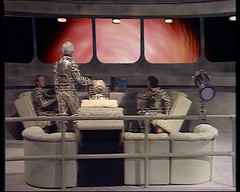 Against that the look of the ship and the feel of Dudley Simpson's music is very Blake's 7. Yeah, I'm sorry but I will keep harping on about it: the two series are intimately linked in feel at this stage of Doctor Who's production and indeed this episode is the first broadcast after Blake's 7's first episode, The Way Back, aired on 2nd January 1978.

As you'll see this story is essentially a giant rip off of any Greek Myth going. At the time Classics was still taught in schools so I suspect a lot of the viewers watching would have got it. The quest at the centre of the story is essentially the story of Jason and the Argonauts and the quest for the Golden Fleece and by this point the 1963 film Jason and the Argonauts, which features second Doctor Patrick Troughton, would have been airing on television regularly. Substituted for the Golden Fleece is Minyan Race Memory bank.... (Minyan = Minoan, as in Minotaur) Hmmm where have we seen a Race Memory Bank before? Hand of Fear, also written by Bob Baker & Dave Martin. Jason becomes Jackson, while Herrick, Orfe & Tala are adaptations of the Argonauts Heracles/Hercules, Orpheus and Talaus. Meanwhile elements of The Odyssey are also included: the quest taking a long time (10 years vs 10,000 years) and the objective being the P7E/Penelope, the wife of Odysseus. Odysseus himself has an on-screen Doctor Who appearance in The Myth Makers, where he was played by Ivor Salter.

You know for every source that Robert Holmes "paid homage to" it's surprising that he never went near Greek Myths. As far as I'm able to tell this story wasn't commissioned under his watch and is wholly the responsibility of incoming script editor Anthony Read, an experienced writer an script editor who was lured back to the BBC by producer Graham Williams. Interestingly when Read leaves the script editor's post and writes for the show he produces a tale based on another Greek myth: Theseus and the Minotaur becomes Horn of the Nimon.

A few episodes back I pointed out that we'd got halfway through the number of episodes broadcast in Tom Baker's stay as the Doctor. Well if you throw in the missing six episodes of Shada, which we'll be talking about at the start of May, that makes this episode, his 89th, the half way point in Tom's reign.

Settle yourself in: virtually the entire cast of this story have Doctor Who form or have done something interesting!

James Maxwell, here playing Jackson, has two episodes of Out of the Unknown to his name: he was in The Dead Past as Jonas Foster and The Fastest Draw as Peter Stenning. The Dead Past exists and can be seen on the Out of the Unknown DVD Set. He was also in the second series Doomwatch as Dr. Whittaker in The Iron Doctor which you can see on the Doomwatch DVD set. He has found infamy post mortem for allegedly haunting Manchester's Royal Exchange Theatre! 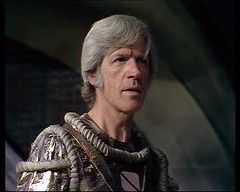 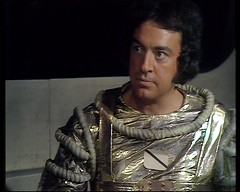 Alan Lake, Herrick, was already well known as Diana Dors third husband. By this point he had appeared in Ringer, the first regular episode of The Sweeney as John Merrick. A few years later he'd guest star in Aftermath, the third season opening episode of Blake's 7 as Chel.

Jonathan Newth, Orfe, now has sci fi form appearing since this story in The Day of the Triffids, as Dr Soames, and Nightmare Man, as Colonel Howard, both of which have strong Who connections behind the scenes. He can also be found in The Professionals: It's Only a Beautiful Picture as James Tibbs 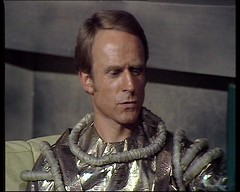 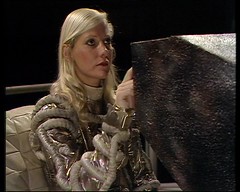 Meanwhile the agent of Imogen Bickford-Smith, Tala, on hearing that Louise Jameson was shortly departing Doctor Who was quick to proclaim his client as the new companion! You can see her in Fawlty Towers:The Psychiatrist as the Girlfriend and she's in The Professionals too appearing as the Blonde in The Untouchables.

Tala starts the story as an old woman before regenerating into a much younger form: 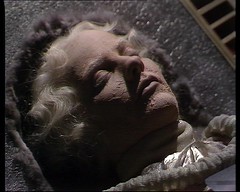 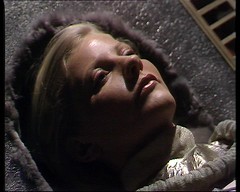 The Doctor has explained that his people had had some prior contact with the Minyans:

DOCTOR: It was what happened on Minyos that led to our policy of non-intervention.
LEELA: Huh?
DOCTOR: Yeah. Well, the Minyans thought of us as gods, you see, which was all very flattering and we were new at space-time explorations, so we thought we could help. We gave them medical and scientific aid, better communications, better weapons.
LEELA: What happened?
DOCTOR: Kicked up out at gunpoint. Then they went to war with each other, learnt how to split the atom, discovered the toothbrush and finally split the planet.
LEELA: So this ship must have got away before the planet was destroyed.
DOCTOR: Yes.
LEELA: That was a hundred thousand years ago. Nobody lives for a hundred thousand years. Do they?

It would appear as if the Minyans also obtained the ability to regenerate from the Time Lords too!

Five days before this episode was broadcast the Blake's 7 episode The Way Back was shown with the second episode Space Fall following 2 days after.