"Do not worry. He has saved many fathers!"

I could just cheat, say I'd seen it and copy the synopsis from elsewhere? No? Oh well....

The gas clears allowing the Doctor to recover and Herrick to be rescued by his crew mates. The guards are overcome by the gas the Doctor has had sucked out the mines. Idas takes the Doctor & Leela to the citadel where the guards are about to sacrifice his father in a chamber nearly identical to the Minyan flight deck. They are captured as the enter the P7E, but Idas disrupts his father's sacrifice enabling them and some of the slaves to escape. They are rescued by the Minyans but Herrick is captured and interrogated by the Seers who reveal that while Guards & Slaves are true Minyans they have evolved. The Doctor & Leela hide in mine carts and are pushed toward the darkened entrance to the P7E

I watched it, I can't unwatch it. Still there was a bit of shooting this episode. But WORST CLIFF HANGER *EVER* - where was the drama there?

The whole thing is appallingly lit: I moan about things being too brightly lit but here it's hard to make out any details at all in a great many scenes, especially in the badly CSO'd tunnels. Oh for a bit more money to decamp to Chislehurst caves where the Mutants was filmed. The same is true of the Citadel itself, very under lit, which tries to hide, unsuccessfully, that it's a redress of the set for Jackson's ship, the R1C. Why bother hiding it as there's a blatantly good reason why it is the same set redressed? 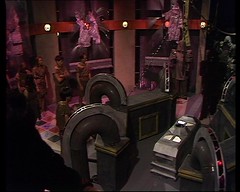 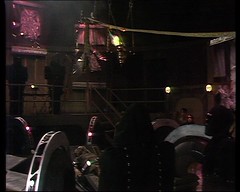 Then we have the unmasking of the seers Ankh & Lakh. You're expecting them to be human beings just like the guards Rask & Tarn but they're some form of cyborg. Unfortunately the head design looks like a cross between something out of King of the Rocket Men, which at that time would be regularly shown on the BBC, and Wordy from Look and Read. You've got the Magic E song in your heads now, you can thank me later. 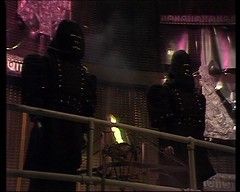 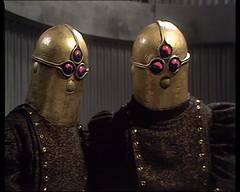 And as for the dreadful lift music as the Doctor, Leela and Idas float down the shaft ...... ugh.

Some more Greek mythology for you: Idmon and Idas are two names taken directly from the Greek while the Oracle, presumably a computer, I really can't remember or care, is named after the ancient source of prophetic knowledge. The most famous Oracle was at Delphi and she was named Pythia, a name that will later resurface in the Gallifreyan mythology in the New Adventures Novels.

About the only good thing here is some continuity to the previous story:

Leela obviously remembers what they did in The Sunmakers.

Two new actors this week, and we don't see either of their faces but we have seen them both before:

Frank Jarvis, Ankh, was a Corporal in DW: The War Machines and returns Skart in The Power of Kroll, the second and final directing job for this story's debut director Norman Stewart. Jarvis is best known for playing Roger in The Italian Job but also appears in The Sweeney as a Prison Officer in Contact Breaker and in The Professionals as Patterson in Look After Annie, Musgrave in Not a Very Civil Civil Servant and Dale in Stopover.

We saw Richard Shaw, Lakh, as Lobos in The Space Museum & Cross in Frontier in Space. His first brush with science fiction was in the late 1950s when he play Sladden in Imps and Demons, The Enchanted, The Wild Hunt & Hob, the third to sixth episodes of Quatermass and the Pit.

Amongst the uncredited Trogs we have John Cannon, a familiar face due to his appearance as Elgin in Hand of Fear part 2. He'd also been a Miner in The Monster of Peladon and a Passer by in The Talons of Weng-Chiang and returns as a Technician in The Pirate Planet, a Guard in The Armageddon Factor, a Guard in The Creature from the Pit, an Extra in Time-Flight, Striker's Helmsman in Enlightenment and Sir Raulf Fitzwilliam's 1st Servant in The King's Demons. His Blake's 7 include a Federation Trooper in Project Avalon, Cevedic's Heavy in Gambit, a Labourer in The Harvest of Kairos and a Federation Trooper in Children of Auron while he's got a Moonbase 3 appearance as a Technician in Castor and Pollux. He's got a Porridge to his name as a Prison Inmate in the superb A Night In, a Constable in Supersnout and a Policeman in Thou Shalt Not Kill for The Sweeney, Huey in It's Only a Beautiful Picture for The Professionals as well as an appearance in The Empire Strikes Back as a Holographic Imperial Officer and 3 episodes as a Legionnaire in Beau Geste for Douglas Camfield.

Two days after this episode was broadcast the fourth Blake's 7 episode Time Squad was shown.