"The Quest Is The Quest!"

The cannon penetrates the accreting mass and they escape, sighting & crashing on a planet that has formed round the P7E. The ship ploughs through the surface of the planet becoming wedged in more solid rock closer to the P7E. In the cave tunnels the Trog underclass mine under the guards, who in turn are the slaves of the Seers who serve the Oracle. The Minyans venture into the tunnels, followed by the Doctor & Leela, who meet escaped Trog Idas. Herrick encounters a guard, causing the guard's superiors to pump gas into the tunnels. The Doctor adjusts mining equipment to suck the gas out of the tunnels, but is overcome before he can finish the job.

Part 1 was slow and boring..... but nowhere near as bad as this. Just a bunch of wandering around in tunnels and pumping gas through them, in itself an awful effect. Dire.

The observant among you might spot that the guards weapons are Minyan shield guns, minus the shield...... 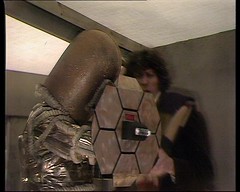 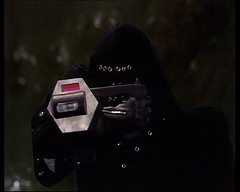 James Marcus, Rask, was a peasant in the Doctor Who serial Invasion of the Dinosaurs. His CV includes UFO as a SHADO Operative in Mindbender, The Sweeney as Myles in Cover Story, directed by Douglas Camfield who obviously liked him because he used him again for the and The Professionals episode Take Away where he plays D.C. Jack. 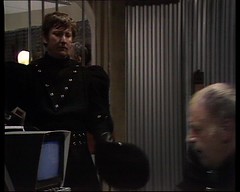 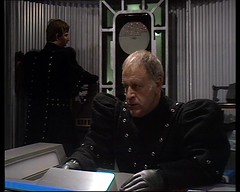 Godfrey James, Tarn, has a CV as long as your arm involving virtually anything I've ever watched. The earliest thing of interest in it is an appearance in Out of This World, the ABC predecessor to Out of the Unknown, where he was in the now missing episode Cold Equations as Perry. He was then in UFO as Game Warden Mitchell in The Square Triangle, The Sweeney as Charley Smith in Big Spender, Space: 1999 as the Alien Transporter in the excruciating The Rules of Luton, The Professionals as Ross Kilpin in No Stone, The Tripods series 2, episodes 2 & 3 as Commander Goetz and A Very Peculiar Practice as Sweet in May the Force Be with You.

Norman Tipton, on the left as Idas, is one of the few actors to play a supporting role in more than one episode of Blake's 7, appearing as Artix in Spacefall & Cygnus Alpha, which were broadcast on the Mondays before & after this episode. He can also be seen in Yes Minister: The Economy Drive as the Photographer. His father Idmon is played by Jimmy Gardner who was previously Chenchu in Marco Polo 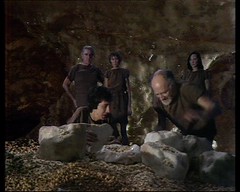 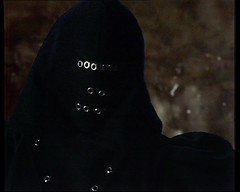 Jay Neill, Guard Klimt, was previously a Pikeman in The Masque of Mandragora & Silvey in The Invisible Enemy. At the start of his career he made several appearances in Doomwatch as a Man in Project Sahara, Laing in The Battery People, a Man in By the Pricking of My Thumbs..., a Young Man in Flight Into Yesterday and a Man in Flood. He has a Yes Minister to his name as a Bodyguard in The Death List.

Two days after this episode was broadcast the third Blake's 7 episode Space Fall was shown.