Ah the Doctor & Leela have *fallen* out of the capsized minecart into the shaft. They are rescued by the Minyans and break into the P7E. The Seers go to consult the Oracle considering giving the Minyans the cylinders if they leave. The Oracle releases the cylinders, observed by the Doctor, and the guards negotiate a truce with the Minyans, returning Herrick & the race bank cylinders. The Doctor confronts the Oracle, which reveals it is the Keeper of the race bank and still has them. The Doctor retrieves the real Race Bank cylinders and flees. The cylinders given to Jackson are taken to the ship which prepares to leave, with K-9 rescuing the Doctor who has been trapped in a tunnel. The Doctor stops the launch bringing them the real Race Banks with K-9 revealing that the fakes are fission grenades. The Doctor is captured with the fakes being taken back to the P7E, but he is rescued by Leela. They flee with the slaves back to the Minyans ship which leaves just before the P7E is destroyed by the fission grenades. The Minyans leave for a new home planet with the surviving slaves as the Doctor returns to the Tardis with Leela & K-9, comparing Jackson to Jason....

The Cliffhanger looked a mess anyway, it wasn't obvious what was going on till you see the Doctor & Leela hanging down from the hole. The Seers aren't explained, no "our secret is revealed we need not disguise ourselves no more". We get another Doctor arguing with a mad Computer, like the face of Evil. 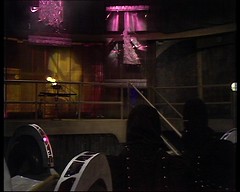 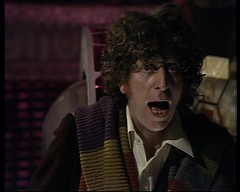 And to top it all the ending resolution is a series of swapping duplicates round. No, it's a mess, in fact the entire story is a mess. You could lay some of the blame with Bob Baker & Dave Martin for the script but my feeling is that it's the implementation by first time director Norman Stewart that's really at fault. He's got another Doctor Who in the following season, The Power of Kroll, but I have little memory of that so I won't be judging him on that here. I will note that after that second story he returned to his former role as Production Manager/Assistant.

I've watched it, it's done, it can join The Sensorites & The Space Pirates on the "I never have to watch this again pile". It's a bit of a shame because through all this mess Tom is still putting in a watchable performance.

Underworld was novelised by Terrance Dicks in 1980. It was released on video in March 2002 and on DVD on 29th March 2010 as part of Doctor Who - Myths & Legends with The Time Monster & The Horns of the Nimon.

Two days after this episode was broadcast the fifth Blake's 7 episode The Web was shown.