474 The Invasion of Time: Part One

"I am here to claim my legal right. I claim the inheritance of Rassilon. I claim the titles, honour, duty and obedience of all colleges. I claim the Presidency of the Council of Time Lords!"

Leela & K-9 remain locked in the Tardis while the Doctor is outside in a spaceship conferring with a race of alien beings signing an agreement with them. The Tardis materialises on Gallifrey where the Doctor visits Chancellor Borusa and claims the presidency of the High Council of the Time Lords. The Doctor has the Castellan redecorate his rooms in Earth style, with the panels made of lead. Leela is taken to find clothes in preparation for the Doctor's inauguration where he will be introduced to the Matrix and take control of it. He is presented with the Sash & Rod of Rassilon, and charged to seek the Great Key. The coronet that connects him to the Matrix is placed on his head but the Doctor collapses in agony. 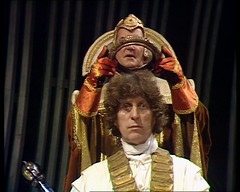 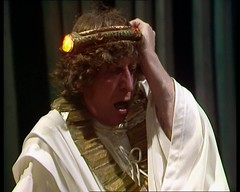 Ah, back to Gallifrey again. We were last here a year and a half ago during The Deadly Assassin, the story before Leela's introduction, when The Doctor was involved in an attempt by the Master to frame him for the murder of the President. During the story The Doctor put himself forward as a candidate for the presidency to escape a death sentance and it's this he now claims. There's been some changes since the Doctor was last here: his old tutor Borusa, then a Cardinal, has assumed the vacant Chancellor roll. Gone are Castellan Spandrell and guard captain Hilred replaced by Kelner & Andred respectively. 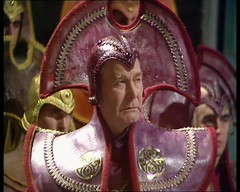 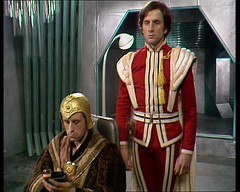 We also get a quick remind of one of the technological achievements at the heart of Time Lord power:

BORUSA: Then Gold Usher will formally introduce you to the Matrix.
DOCTOR: Ah. Just the Matrix.
BORUSA: There is no just about it. The Matrix is the sum total. Everything. All the information that has ever been stored, all the information that can be stored, the imprints of personalities of hundreds of Time Lords and their Presidents, their elected Presidents. That will become available to you. It will become a part of you as you will become a part of it.
DOCTOR: Yes, that's what I thought. BORUSA: But you know this already. Once before, you have entered into the amplified Panatropic computer.
DOCTOR: Yes. I didn't much care for it, either.
BORUSA: The APC net is only a small part of the Matrix.
DOCTOR: And when I've been introduced to the Matrix, will I have complete power?
BORUSA: More power than anyone in the known Universe, yes.
DOCTOR: I'll put it to good use. The best.
BORUSA: That is your duty.
DOCTOR: Oh, yes, quite, quite.

It's when he's connected to The Matrix that the Doctor collapses.

The Doctor is up to something right the way through the episode but at this stage we're not really sure what. It's a bit non committal on the identity of the aliens he's conferring with and who are watching him. 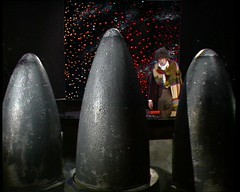 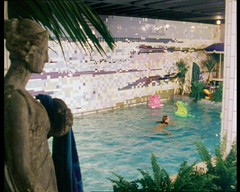 We get to see the Tardis bath room for the first time in this episode, which is in fact a big swimming pool, but a couple of the other rooms are slightly odd, noticeably the darkened console room and the echoey landing area where the footsteps can be heard.

This is director Gerald Blake's second Doctor Who story, returning to the program for the first time since 1967's The Abominable Snowman, which would remain the longest gap beween directorial assignments for the series.

Charles Morgan, who plays Gold Usher here, is the sole actor in this story to also have appeared in director Gerald Blake's previous Doctor Who: he was Abbot Songsten in The Abominable Snowmen. Charles Morgan was in the British science fiction disaster movie The Day the Earth Caught Fire, released two years to the day before Doctor who started, where he plays an uncredited Foreign Editor. He too was in Out of This World appearing as the Chief in the first episode Dumb Martian, which launched the series as part of Armchair Theatre.

A Gold Usher, I'm assuming it's a role rather than a person, appeared previously in The Deadly Assassin where he was played by Maurice Quick. Given that Time Lords regenerate, as seen by Borusa here, it could well be the same person!

A thought: imagine how different the serial would have been if Blake had also recalled Norman Jones, Khrisong in The Abominable Snowmen, instead of the similarly named Milton Johns and had him play Kelner instead? 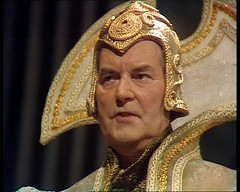 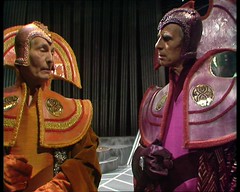 Two more of the Time Lord actors have even earlier Doctor Who form appearing in Hartnell stories: Dennis Edwards, Lord Gomer, was a Centurion in The Romans. He's got an appearance as a Village Elder in The Tripods to his name.

Reginald Jessup, Lord Savar, was the Servant in The Massacre. He'd previously been in Quatermass II as a Plant Technician in The Food and an Extra in Riot Sequence in The Frenzy.

There's a familiar face amongst the Gallifreyan Guards: Peter Roy He was a Greek Soldier in The Myth Makers, an Extra in The Highlanders, an Airport Police Sergeant in The Faceless Ones, a UNIT / Bunker Man in The Invasion, a Guard in The Seeds of Death, a Space Guard in The Space Pirates, an uncredited extra in Doctor Who and the Silurians, Technic Obarl in Hand of Fear, a Guard in The Face of Evil and an Extra in The Sun Makers. He returns as a Gracht Guard in The Androids of Tara, a Guard in The Armageddon Factor, a Policeman in Logopolis, an Ambulance Man in Castrovalva, a Man in Market in Snakedance and a Walk on in Resurrection of the Daleks. Like many extras at this time he has Blake's 7 form too appearing as a Citizen / Prisoner in The Way Back & Space Fall, an Alta Guard in Redemption, an Albian Rebel in Countdown and a Federation Trooper / Rebel in Rumours of Death. In the The Hitchhiker's Guide to the Galaxy he plays the Limousine Chauffeur in episode 2. He's got a notable role in the James Bond film Thunderball where he played British Secret Agent 006. He has a less obvious appearance in Return of the Jedi as Major Olander Brit but that hasn't stopped the character from getting a Wookipedia page!

Giles Melville is an Extra somewhere in this episode if IMDB is to be believed. He was in Genesis of the Daleks as an Elite Guard and returns in Castrovalva as a Castrovalvan. He'd previously been in the opening Survivors episode The Fourth Horseman as Kevin Lloyd and makes two Blake's 7 appearances as a Star One Technician in, surprisingly, Star One and a Passenger in the fourth season heist caper Gold. 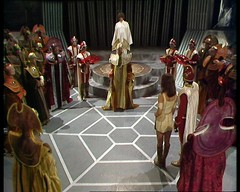 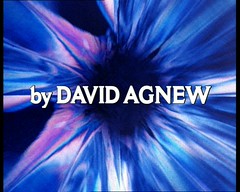 So who is this David Agnew who is writing this episode? Well he's not writer David Weir who was scheduled to write serial 4Z. Weir was an old friend of script editor Anthony Read, who had script edited & produced Weir's The Troubleshooters scripts. David Weir goes on to write the English translations of The Water Margin and Monkey. Weir came up with a script called, depending on who you talk to, either "The Killer Cats of Geng Singh" or "The Killers of the Dark". However when the production team received the script they discovered there were certain elements that would be difficult to film: a Wembley stadium sized arena is the one that's usually quoted. So at a late stage Weir's scripts were binned and Script Editor Anthony Read and producer Graham Williams locked themselves away and produced The Invasion of Time, sticking out under a regular BBC Pseudonym, David Agnew. This wouldn't be the last time that Williams, as Doctor Who producer, would help to put a script out under the Agnew name. The next time however he would have a rather more famous collaborator....

So we have a script ready to go. What could go wrong? Join us next week as we talk about the Play School Clock!

Two days after this episode was broadcast the sixth Blake's 7 episode Seek-Locate-Destroy was shown.