475 The Invasion of Time: Part Two

"Even the sonic screwdriver won't get me out of this one!"

The Doctor is taken away for medical attention as the Time Lords argue if the Matrix has rejected him. The Doctor orders that Leela is to be cast out the citadel but she escapes. Borusa questions the Doctor's odd actions. She follows the Doctor as he walks through the capital and returns to the Tardis to confer with K-9 where they plot an Invasion. Leela meets Rodan who is in charge of Space Traffic control. Castellan Kelner detects the Doctors absence from the rooms where he's been resting but he has returned via the same secret passage he left through by the time Kelner & Borusa arrive. Kelner is ordered to find Leela and Borusa to summon the council. Rodan detects an alien fleet approaching Gallifrey and has the transduction barriers raised. However K-9 has been sent to destroy them and they fail. As the Doctor addresses the council he introduces them to their new masters as 3 shining alien forms appear. 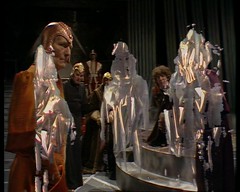 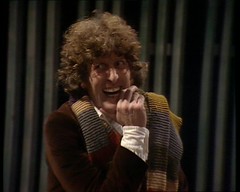 There's some very erratic behaviour by the Doctor in this episode and, as his conversation with K-9 shows, he's up to something:

DOCTOR: What do you think?
K9: Too many variables for accurate forecast, master.
DOCTOR: Really? What variables?
K9: Humanoid illogical procedure, master.
DOCTOR: Like me?
K9: Affirmative.
(K9 puts his little red sucker probe against the Doctor's skull.)
DOCTOR: How am I?
K9: Cerebral circuits in order. Physiognomy dubious.
DOCTOR: Oh, I see.
K9: The risk you took would appear to have been justified.
DOCTOR: Good. Can we proceed then?
K9: Actions so far indicate a success probability along this path analysis, thirty nine point seven five.
DOCTOR: That bad, is it?
K9: Affirmative.
DOCTOR: Listen, I've discovered the location of the security control room. It's directly beneath the Panopticon area, level three zero.
K9: Then success probability increases to forty eight point three five.
DOCTOR: Well, that's not bad.
K9: Advise against any plan incorporating success factor below six five.
DOCTOR: Suppose I throw a mirror cast?
K9: Master?
DOCTOR: Shadow shift. Create a false image to Space Traffic Control.
K9: Suggest you reflect the transmission
DOCTOR: Shush. Suppose I reflect a transmission beam off the security shield, feed it back through a link crystal bank and boost it through the transducer?
K9: Couldn't have put it better myself, master.
DOCTOR: I don't think you could. Ha!
K9: Agree. Possibility of your explanation being better than mine, less than one percent.
DOCTOR: What? You are the most insufferably arrogant, overbearing, patronising bean tin.
K9: Master?
DOCTOR: Nothing. Someone once said that to me, once.
K9: Correction, master. Several people have said that about you.
DOCTOR: Thank you. Thank you very much.
K9: Thanks are not necessary.
DOCTOR: Well at least no one's ever called me smug!
K9: Correction.
DOCTOR: Listen. If you destroy the control centre after I feed in the Doppler effect and eliminate the red shift, the invasion must succeed, hmm?
K9: Probability of success would rise to ninety eight point two.
DOCTOR: Well, what's a couple of points between friends? Break the transduction field.

There's a lot of filling in time here with the sneaking out of the rooms, journeying to the Tardis and back again. I know this episode was written in a hurry so I'm not surprised to see some of the usual tricks being pulled out the bag to eat up time. 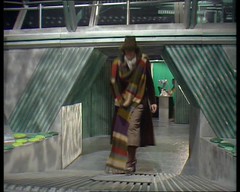 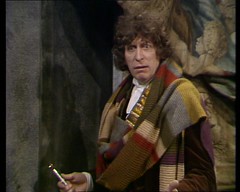 In the midst of this we have the Doctor trying to figure out a way out of the Chancellor's locked quarters and we get a line frequently quoted as the height of Tom Baker's silliness as he breaks the fourth wall and addresses the audience directly:

DOCTOR: Even the sonic screwdriver won't get me out of this one. I have a problem. There is absolutely no point in having another door in the room if you don't have another key, hmm? QED. What? Latin. QED, Latin. Now, a key can either be lost or stolen, hmm? Therefore, ergo, you are the key, Borusa. Hmm? Palm print? No, that's too simple. Retina pattern? No. You must admit, you do like the sound of your own voice. Open sesame. I command you to open. Please. Palm print, no. Retina pattern, no. Voice print? As Borusa always said, there's nothing more useless than a lock with a voiceprint.

At which point the door opens!

Now I think the scene works, the Doctor's evidentially talking to himself. It also, indirectly, has some influence on a similar scene with a hidden door & unusual lock in The Five Doctors!

Then at the end of the episode we have the shock as K-9 destroys Gallifrey's defences and the Doctor surrenders his own people to alien beings.....

RODAN: The transduction barrier has failed. We are being invaded.
DOCTOR: Gentlemen, this is no ordinary meeting. I'm privileged to introduce to you your new masters!

We only get a brief glimpse of the invaders this episode but what we see isn't terribly great ..... But more on that next episode when we'll see more of them.

At the time this program was made Britain was going through a period of industrial unrest and militant unionism in the workplace. At the BBC a regular bone of contention was the Play School clock: Props said it belonged to them, the Electricians said it was their responsibility. Any hint of a disagreement elsewhere and this was used to bring the unions out on strike. In the run up to this story being made the near annual BBC strike occurred and as a result the need to get the BBC's Christmas programs recorded resulted in the number of studio sessions this story would need being cut from three to one. Director Gerald Blake shot the Tardis, Panopticon and Alien war room scenes here. Two of these, as I mentioned in the previous episode, don't look quite right: The Tardis is dark & cramped and the Panopticon very echoey. The team then decamped to the disused St Anne's hospital in Redhill where much of the rest of the "studio" work was done, including the Gallifrey corridor scenes and the Tardis interior work for episodes 5 & 6.

This would not be the last time strikes would effect Doctor Who: come back for more of the same to a lesser or, more frequently, greater degree on The Armageddon Factor, Shada, Enlightenment, King's Demons & Resurrection of the Daleks. One of these will end up being cancelled half way through while another is a remake of a story cancelled by strikes in a previous season.

One of the main problems I have with this story is the presence of Christopher Tranchell as Andred. Not because it's a bad performance, though it isn't the greatest, more because I associate him with presenting Play School when I was younger. It'd be like the new series having Justin Fletcher as the chief Time Lord guard in the new series! Tranchell had previously appeared as Roger Colbert in The Massacre of St Bartholomew's Eve and Jenkins in The Faceless Ones. He has an Out of the Unknown, The Sons and Daughters of Tomorrow where he played PC Wilkes, on his CV but sadly that's missing from the archives. He was a semi-regular in Survivors appearing as Paul Pitman in Spoil of War, Law and Order, The Future Hour, Revenge, Something of Value, A Beginning, Birth of a Hope & Greater Love. He later finds himself being given the cold shoulder by the BBC, allegedly for his left wing political leanings. 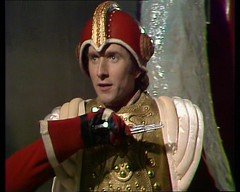 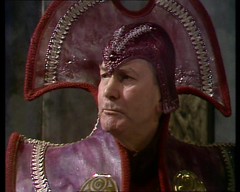 John Arnatt becomes the second person to play Borusa after Angus MacKay portrayed him in the Deadly Assassin. Arnatt can be later seen in House of Cards as Sir Jasper Grainger in the first two episodes.

Milton Johns, playing Castellan Kelner, is putting in the sort of performance that wouldn't be out of place on one of the many sitcom appearances on his CV. He'd worked on Doctor Who twice before as Benik in The Enemy of the World and Guy Crayford in The Android Invasion, both directed by Barry Letts. He's one of a number of Doctor Who actors to appear in the Star Wars films playing an Imperial Officer in The Empire Strikes Back. MY DVD collection also has his appearances in Yes Minister: The Economy Drive as Ron Watson and The Professionals as a Clerk in No Stone. Toby Hadoke interviews him in Who's Round 136 and 137, the only episodes of the podcast where both participants are in collar and tie! 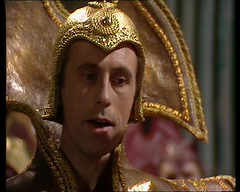 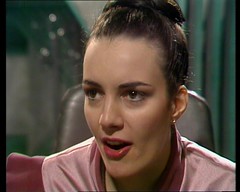 Rodan, who first appears in this episode although she is briefly mentioned in episode 1, is frequently credited as being the first female Time Lord, none having been seen in War Games, Three Doctors & Deadly Assassin. This does conveniently forget Susan, the Doctor's grand daughter! Rodan is played by Hilary Ryan. The only other thing I've seen her is The Professionals: Man Without a Past where she is Carol Forrest

If you're thinking the name Rodan sounds familiar then it is: it's the English name of one of the monsters in the Godzilla films.

Two days after this episode was broadcast the seventh Blake's 7 episode Mission To Destiny was shown.