476 The Invasion of Time: Part Three

"Resistance is useless. The Vardans have more power than we have dreamed of and more knowledge than we can hope for. You must submit the way I did when I first met them."

The shimmering alien invaders, named as Vardans, take control as the Doctor enquires as to if the redecorations of his office have been finished. The Vardans order the Doctor to find the great key. Finding the lead panelling in place in his rooms the Doctor is finally able to talk with Borusa his old teacher and confides in his plans. He tells him of the Vardans' plans and how the lead in the room shields them from their telepathic abilities. Andred catches Leela & Rodan escaping from the citadel, but rather than turn them in he helps them escape. In the Wilderness beyond the citadel Leela & Rodan are quickly captured by a tribe of outsiders who have rejected Time Lord society. Kelner sets a bodyguard over the Doctor with orders to report everything the Doctor does to him. The Doctor, Chancellor Borusa & Castellan Kelner meet with the Vardans, but Borusa refuses to obey them and is placed under house arrest. Kelner is ordered to crush any resistance and to produce a list of troublemakers. The troublemakers are expelled from the citadel. The Doctor is ordered to dismantle the shields surrounding Gallifrey. Andred decides the Doctor has betrayed them and follows him to the Tardis. K-9 is connected to the Matrix as Andred arrives and pulls a gun on the Doctor.

Is this the first appearance of the longer version of the end theme on a Tom Baker episode? I think so, it's the first time we've heard the middle bit for a while.

So.... the Vardans. Hardly in the episode and when they are they're a sheet of bacofoil jiggling around like it needs the toilet (thank you Liz). Not the world's most successful monster are they? But we know they're powerful telepathic superbeings: the Doctor's told us so. Liz is with me watching this and we both collapsed in fits of giggles as the Doctor opens his coat and says "do you know what this is?" to the guard? It's the Sash of Rassilon but the dialogue immediately makes you think the Doctor is indecently exposing himself! 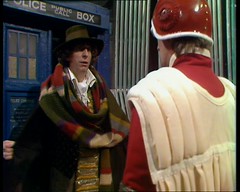 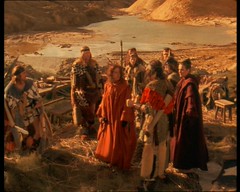 The Outsiders came is filmed at Beachfields Quarry in Redhill, previously a location in Frontier in Space & Planet of the Daleks. By this point it had also made it's first Blake's 7 appearance, in the fourth episode Time Squad as the planet Suarian Major. Blake's 7 would use it again in Deliverance, Hostage, Moloch, Power & Warlord, giving Beachfields a decent claim to be THE BBC Quarry.

Finally getting a major part in a Doctor Who story is regular supporting artist & stuntman Max Faulkner, playing outsider leader Nesbin. He'd previously been in The Ambassadors of Death as a UNIT soldier, Death to the Daleks as an Exillon, The Monster of Peladon as a miner, Planet of the Spiders as a Guard Captain, Genesis of the Daleks as a Thal Guard, a Crew Member in Planet of Evil, & The Android Invasion as Corporal Adams, which was his largest and most recognisable role to date, a Tribesman in Face of Evil & a Rebel in The Sunmakers as well as fight arranging Hand of Fear. This is his final Doctor Who role.

You can also see him in two episodes of The Prisoner as the First Horseman in Living in Harmony and the Scots Napoleon in The Girl Who Was Death, Space: 1999 as Ted Clifford in Ring Around the Moon, Survivors as Phil in Mad Dog, Blake's 7 as a Death Squad Trooper in Powerplay, The Day of the Triffids as Jo's Attacker inthe second episode, the James Bond film GoldenEye as a Guard at Helicopter Show and many, many more. 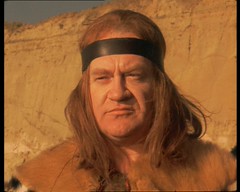 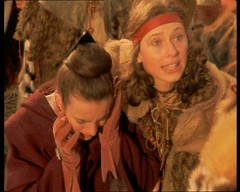 His fellow Outsider Presta is played by Gay Smith who, according to Wikipedia, is now a famous race-horse trainer in Australia!

One of the tribe of Outsiders in Mike Mungarvan. He'd previously been a Mutt in The Mutants and a Guard in The Face of Evil but we'll be seeing him much more regularly from now on as he plays a Druid in The Stones of Blood, a Gracht Guard in The Androids of Tara, a Dalek Operator in Destiny of the Daleks, a Plain Clothes Detective in Louvre in City of Death, an Arglin / Pangol Image in The Leisure Hive, a Citizen in Full Circle, Kilroy in Warriors' Gate,the u 1st Kinda Hostage in Kinda, Ranulf's Knight in The King's Demons, a Soldier in Resurrection of the Daleks, a Jacondan in The Twin Dilemma, an Extra in The Trial of a Time Lord: Mindwarp, the Duty Officer in The Trial of a Time Lord: Terror of the Vervoids, a Lakertyan / Tetrap / Genius in Time and the Rani and a u Poilceman in Silver Nemesis plus a Passer By in the new series story The Christmas Invasion. IMDB believe him to be the only actor to play a Dalek, in Destiny Of The Daleks, and a human killed by the Daleks, Soldier in Resurrection of The Daleks. In Blake's 7 he plays a Prisoner in The Way Back & Space Fall, an Alta Guard in Redemption, a Customer / Gambler in Gambit, a Helot in Traitor and a Rebel Technician / Federation Trooper in Blake, making him one of the few actors to appear in the first and last episodes of that series. He's in Fawlty Towers as a Hospital Orderly in The Germans, The Sweeney as a Constable in Victims and The Professionals as Will in Black Out.

One of the Time Lords in this episode, Laurie Goode was also a Mutt in The Mutants and returns as a Bandit in The Creature from the Pit, a Tigellan in Meglos, a Peasant in State of Decay, a Tharil in Warriors' Gate, a Sailor on the Shadow in Enlightenment and a British Unit Trooper in Battlefield. You can see him in The Sweeney as Laurie in Queen's Pawn and the Supermarket Manager in Trojan Bus, Survivors as a Looter in The Chosen, Blake's 7 as a Hi-tech Patient in Powerplay, The Hitchhiker's Guide to the Galaxy as a Jogger in Fir the Sixth, For Your Eyes Only as a Skier, Metal Mickey as a Barman, Star Cops as a Dealer in Little Green Men and Other Martians and the Randall & Hopkirk (Deceased) remake as a removal man in Drop Dead.

Two days after this episode was broadcast the eighth Blake's 7 episode Duel was shown.