477 The Invasion of Time: Part Four

"It's been a long, hard road, but at last the future of Gallifrey is assured. What, what are you looking at?"

K-9 stuns Andred and when he recovers the Doctor tells him he's trying to get the Vardans to materialise so he can trace their planet then time loop it. He believes the Matrix has been invaded. Kelner tells the Vardans that the Doctor has been behaving oddly, but they have suspected him for some time. Beyond the capital Leela is training the Outsiders in the use of weapons. The Doctor decides to dismantle the forcefield to force the Vardans to materialise. With the forcefield down the Vardans assume the humanoid physical form. The Outsiders enter the citadel and begin to attack. K-9 & Andred await the Doctor in his office and once he is inside the Vardans deduce that the Doctor has betrayed them. K-9 is given access to the Matrix as Leela & the Outsiders arrive and using it's power to send the Vardans back to their own planet. The Doctor is delighted at having beaten them but as they celebrate four Sontaran warriors appear in the Pantoptican! 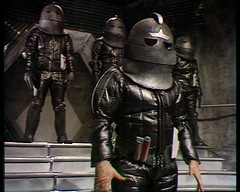 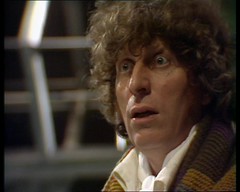 A cavalcade of smut and unintentional innuendo from "if you cannot pull of a simple palace revolution what can you pull off?" through to trying to work out what that Vardan is up to under the bacofoil as it sits it the chair. We laughed our way through it.... well apart from when we weren't despairing at the actual appearance of the Vardans. Rippling Bacofoil or humans in drab uniform? 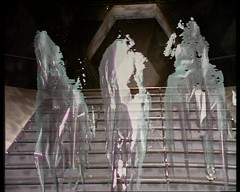 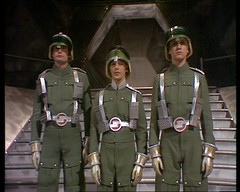 Worst Monster *EVER*. Thankfully the entire shimmery monster thing will be done a bit better when they try it next year.

Onto the actors. Before we sort out which Vardan is which we should mention the outsider with Leela & Rodan, named Jasko, who is played by Michael Mundell can be seen in Fahrenheit 451 as a Trainee Stoneman, UFO as Lt. Ken Matthews in Identified and Computer Affair. 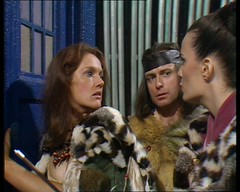 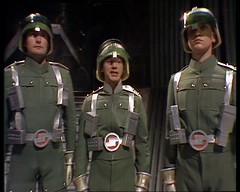 This episode is the only time we can see the Vardans in the flesh, though the speaking actors have been with us since part one. The problem is every publication I've ever seen only credits TWO of them!

The Vardan on the right in the group shots is Tom Kelly who we've seen much more recently as different Guards in both the The Face of Evil & The Sun Makers, both of which are directed by Pennant Roberts who also directs his Blake's 7 appearance in Spacefall as Nova. So I can be pretty sure of what he looks like and that that's him! He also appears in Sapphire & Steel The Railway Station as the Soldier / Sam Pearce. You can hear him interviewed by Toby Hadoke in Who's Round 158. 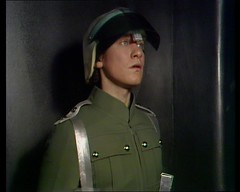 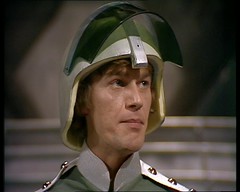 The other speaking Vardan, in the centre, is by a process of elimination the other credited actor Stan McGowan. He was in television classic I, Claudius as a Young Man in Hail Who?

So who is the silent Vardan on the left then? I consulted m'learned colleagues at Roobarb's forum and Richard Bignell ID'd him as Julian Hudson, down on IMDB as an Extra for this episode. He'd previously been an Audience Member / Meditator in Planet of the Spiders, an Extra in Genesis of the Daleks and a Morestran Crew Member in Planet of Evil. He's got one more turn to come as a Seabase guard in Warriors of the Deep. 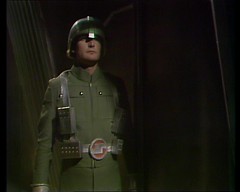 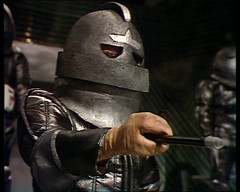 Anyway the Vardans are gone now and in their place we have our old friends the Sontarans. Having been advised by Robert Holmes to structure a six parter as Four and Two, similar to how Holmes had Robert Banks-Stewart structure Seeds of Doom, Graham Williams and Anthony Read use Holmes' own creations to finish the serial off and in the process neatly bookend the season which opened with their eternal foes, the Rutans, in Horror of Fang Rock.

Two days after this episode was broadcast the ninth Blake's 7 episode Project Avalon was shown.