478 The Invasion of Time: Part Five

"If you wanted to hide a tree, where would you hide it?"

Commander Stor tells the Doctor that they used the Vardans to invade. The Doctor conceals his identity and they start to search the capital for him. Borusa, who has been monitoring events, has the Sontarans attacked with a sonic weapon and the Doctor flees to his rooms. Kelner co-operates with the Sontarans just as he did with the Vardans. Borusa meets them in the Doctor's office as they arrive and they escape through a secret passage to Borusa's office where the Doctor obtains from him the Great Key of Rassilon, which has been entrusted to Time Lord chancellors for generations to prevent presidents from holding absolute power. They take refuge in the Tardis. Rodan helps the Doctor use the Tardis to patch the hole in Gallifrey's shields. Kelner remotely manipulates the stabiliser banks of the Doctor’s TARDIS to try and destroy the resistance force within by hurling them to the heart of a Black Star. 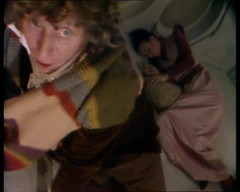 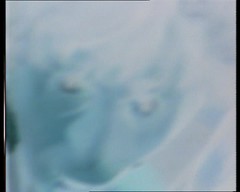 A bit of running around and not much else. Kelner's an annoying so and so isn't he? Falls quickly in with one set of invaders and then when their gone transfers his allegiance to the next. And this man is in charge of the Time Lords security and defence?

This episode inadvertently sheds some light on the background to the events of the Deadly Assassin.

DOCTOR: People are dying out there. Men, women, Time Lords even have died in that battle.
BORUSA: I know that.
DOCTOR: Isn't that important to you?
BORUSA: Should it be?
DOCTOR: It leaves you unconcerned. That's the difference between you and me, Chancellor. I'm very concerned.
BORUSA: Then you should remember your training in detachment.
DOCTOR: I'd rather care. Don't you care about your world being invaded by alien warmongers? These are Sontaran shock troops. A few still, but soon there'll be thousands, millions, threatening time itself.
BORUSA: They cannot threaten time! Not while I
DOCTOR: Yes, Chancellor. Not while you have the Great Key. If you wanted to hide a tree, where would you hide it? In a forest. I read your essay on reason. Which one is it?

DOCTOR: I'll take them all, if necessary.
BORUSA: Take them.
DOCTOR: No. Rassilon was a wily old bird. No president without the Great Key can have absolute power, correct? So to protect the Time Lords from dictatorship, he gave the Key into the hands of a Chancellor.
BORUSA: None of this is in the Matrix.
DOCTOR: I know. I've been there. You haven't. There's no record in the Matrix of any president knowing the whereabouts of the Great Key. So who does? Not the Castellan, he's just a jumped up guard. But who guards the guards?
BORUSA: The Chancellor.
DOCTOR: Yes. And I'll kill you before I let that Key fall into the hands of the Sontarans.
BORUSA: That will not be necessary. 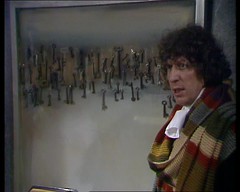 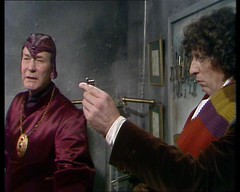 BORUSA: You are the first president since Rassilon to hold the Great Key.

The location of the Great Key, an enormously powerful artefact here actually shaped like a key, has been unknown to Time Lord Presidents, but in the custody of Chancellors. So, by implication, no Chancellor can serve as president. Yet that is precisely what Goth wants in Deadly Assassin. So why does the president not appoint him Chancellor? I assume that there's some cover-up reasoning, known only to the president, that keeps Chancellors from that office. Ironically the events of Deadly Assassin will eventually lead to a Time Lord Chancellor serving as president and, as Rassilon feared, becoming a power mad despot. Thankfully, as we will see, the great key is no longer an issue by then.

Powerful Keys may well have been on producer Graham Williams' mind at this point as he would have been preparing for the next season. Is the Great Key here a prototype for the Key To Time which we're about to see hunted for?

I know little of Derek Deadman, playing Sontaran commander Stor, beyond what his Wikipedia entry tells us. He's got an appearance in The Sweeney: Drag Act as Curry and another in the Porridge movie as Cooper so I've seen things he was in even though I haven't seen him play Ringo in Never the Twain, alongside Evil of the Daleks' Windsor Davies. 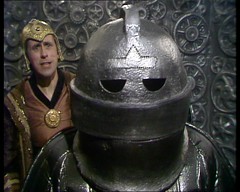 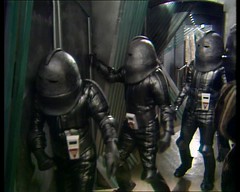 One of his underlings is stuntman Stuart Fell who was in both The Curse of Peladon & The Monster of Peladon as Alpha Centauri, Planet of the Spiders as a tramp, The Ark in Space as a Wirrn, The Android Invasion as a Kraal, The Brain of Morbius as Morbius Monster & The Masque of Mandragora as an entertainer. He'll be back in the State of Decay as Roga and next episode we'll see why he was cast.

There are FOUR Sontarans in the Panoptican at the end of last episode and the start of this one, making this the first time we've seen the Sontarans in any number. Both the Time Warrior & The Sontaran Experiment feature just a lone warrior, Lynx & Styre, though we see Styre's Marshall on video link. Evidence suggests the force is slightly larger than this: two of the troopers die by knife to the probic vent during the trip to the Tardis, and one is with Stor & Kelner in the Presidents office. However a further two troopers then pursue The Doctor & Borusa! This suggests there's at least a further two extras playing Sontarans, just to make up the numbers in the initial scene!

Two days after this episode was broadcast the tenth Blake's 7 episode Breakdown was shown.