479 The Invasion of Time: Part Six

"It's bigger than it looks, your Tardis!"

The Doctor throws the fail safe switch on his Tardis. Kelner fetches the keys so the Sontarans can gain access but the Doctor and his friends flee into the interior. K-9 & Rodan, under hypnosis construct a weapon in the workshop. The Sontarans pursue the Doctor through the Tardis. Borusa realises the the Doctor has had Rodan build the ultimate weapon, the D-Mat gun. The Doctor takes it to the Panoptican where Stor is threatening to destroy the Galaxy. The Doctor shoots him with the D-Mat gun destroying Stor and his explosives, but in the process wiping the Doctor's memory of recent events. Leela elects to remain on Gallifrey with Andred, who she has fallen in love with and K-9 stays with her. 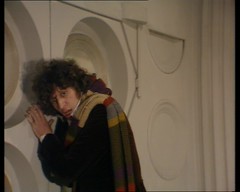 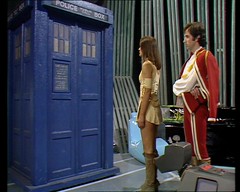 The Doctor, alone in the Tardis, starts work on K-9 mark II. 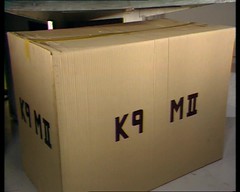 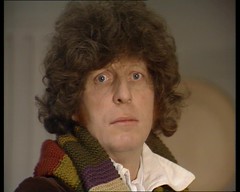 Let's spend an episode running round the Tardis..... of course in later times we'd get some roundel laden walls and purpose built scenery to represent the Tardis interiors but here, our most extensive exploration of the Tardis interior so far, we have to make do with the disused St Anne's hospital in Redhill. Let's just say that when I read the book, a favourite in my youth, I pictured this very differently! But over the top of the scenes, all featuring brick walls, plays the Tardis interior noise helping to try to convince us that we are actually inside the time vessel still. One location, which looks like a disused swimming pool, keeps popping up time & time again but the joke here is that lots of the Tardis looks similar and that the Doctor might not be able to find his way round his own time machine. 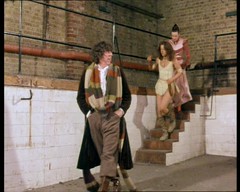 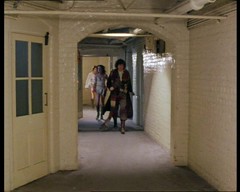 One other location is used, the swimming pool at British Oxygen, previously seen in part 1, where the Sontarans ambush the travellers, involving a stunt fall from one which demonstrates why stuntman Stuart Fell was hired. 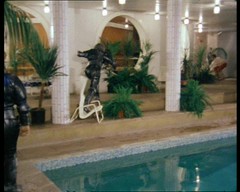 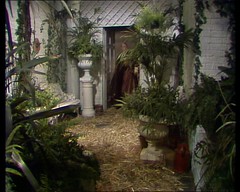 The garden set, oddly reminiscent of Logopolis' Zero Room, and the art gallery disguised Auxiliary Power Complex are nice too. 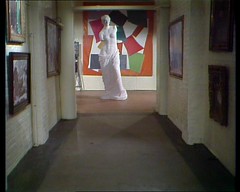 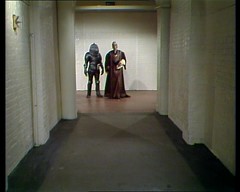 However the Tardis workshop, with it's blacked out exterior windows, is probably the location that works the least well. A distinct lack of high tech tools and equipment doesn't help! 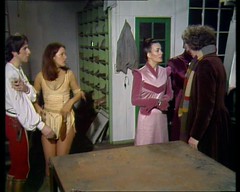 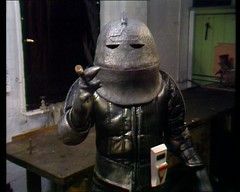 It's just a shame that our first major wander round the Tardis had to happen in such circumstances where there's no money and no studio time for specialist sets. Of course there's no reason why the depths of the Tardis shouldn't look like a brick built building and what we see here is quite good in places. I just miss the roundels! 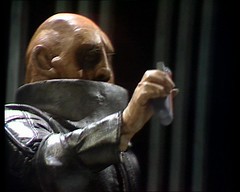 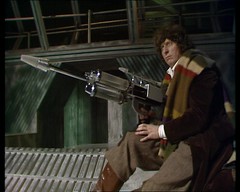 I've no idea where Stor's sudden desire to blow up the galaxy comes from, but fortunately the Doctor has a magic gun which wipe out him & the explosives. 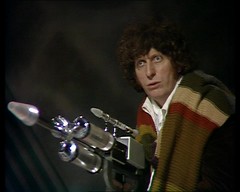 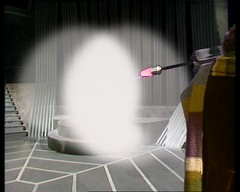 Then we've got Leela's departure. Louise Jameson had given plenty of notice but right up until the end producer Graham Williams had hoped she could be persuaded to stay. He then had to hurriedly write her leaving and paired her off with Andred when surely it would make more sense for her to claim leadership of the Outsiders or fall in love with one of them and build that up through the show. 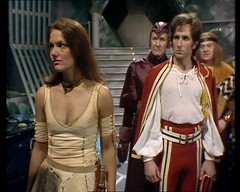 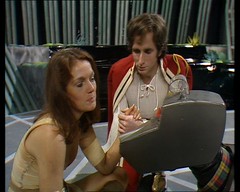 Apparently K-9 leaves here too because they were getting a better prop for next season that looked slightly different.... well I can't tell the difference. Anyway.... Louise Jameson goes on to star in Tenko and Bergerac. Along the way she does some prison visiting which is how she meets Leslie Grantham and encourages him into the acting profession. He later appears in Doctor Who in Resurrection of the Daleks then joins the initial cast of Eastenders, as "Dirty Den" Watts, a program Louise Jameson herself takes part in many years later.

My honest opinion of Invasion of Time is that what we get on screen is horribly flawed but there's nothing wrong with it that another run or so past a script editor (which they didn't have time for) especially to telegraph and to come up with a better explanation for Leela's departure, longer in the studio (prevented by strike action), a bit more cash and a few changes of cast wouldn't fix. It all looked and felt very different when I read the book...

Invasion of Time was novelised by Terrance Dicks in 1980. It marks the end of 11 consecutive stories which were adapted into books by Terrance Dicks. It was released on video in March 2000 and on DVD in May 2008. It was also included in the Doctor Who : Bred for War Boxset which collects The Invasion Of Time with the other three Sontaran stories: The Time Warrior, The Sontaran Experiment & The Two Doctors. Bred for War was released on 5th May 2008 to tie in with their return in the fourth series of the new Doctor Who.

Two days after this episode was broadcast the 11th Blake's 7 episode Bounty was shown with Deliverance & Orac following over the next two weeks.

This marks the end of the Fifteenth season of Doctor Who. During the summer of 1978 two stories were repeated: from the 13th July to 3rd August The Invisible Enemy was broadcast followed by the Sunmakers on 10th to 31st August. The chances are that this broadcast of the Sun Makers provides my memory of the Doctor & K-9 conferring in a tunnel. Also shown during this summer on Saturday 24 June was a repeat of the Dalek Invasion of Earth movie. M'learned colleagues at Roobarb's DVD Forum have furnished me with Dalek Invasion of Earth movie repeat dates in the 1970s (19 Aug 1972, Thu 27 Jun 1974 [replacing rained off Wimbledon] & Sat 24 Jun 1978). Given that I was born in 1973 this last date is the only showing I could have seen giving rise to my fear of the Daleks. I vividly recall as they moved around London & blew up a shed and as a huge ball chased a companion down a shaft..... and turning the TV over between these incidents but keep having to turn back for a peak! Despite this experience when Doctor Who returned in the autumn of 1978 I would, after a few weeks scared the Daleks might show up at any second, be persuaded to watch....

Forty Years Of Tom Baker's Doctor will return on 2nd September 2018 with The Ribos Operation: Part One!