480 The Ribos Operation: Part One

"The Key to Time is a perfect cube, which maintains the equilibrium of time itself!"

The Doctor is planning a holiday for himself & K-9 when he is brought to the realm of the White Guardian who charges him with recovering the six segments of the all powerful Key to Time which are scattered & hidden throughout the cosmos. They are all disguised so the Doctor will be given a locator device and a new assistant, Romana. The Black Guardian will be seeking to stop the Doctor in his quest. He meets his new assistant, the Time Lady Romana, when he returns to the Tardis. The locator core guides the Tardis to the planet the first segment can be found on.

On the planet Ribos, Garron and Unstoffe break into the building holding the crown jewels with Unstoffe depositing a lump of valuable mineral Jethrik into as cabinet. Unstoffe meets the newly arrived visiting dignitary the Graff Vynda-K. Garron is attempting to sell Ribos to the Graff but the Graff is unwilling to pay the price Unstoffe is asking. The Graff discovers a reference the amount of Jethrik on the planet and becomes much more interested: The Jethrik when mined would help pay for a campaign to regain his crown & homeworld. The Doctor & Romana break into the state strong room, locating the segment of the Key in the cabinet housing the crown jewels but as they try to open it Unstoffe sounds an alarm causing the Doctor & Romana to be trapped with the shrivenzale, the fierce local beast who guards the chamber.

It's a game of two halves today: the first part of the episode is 100% set up for the season giving the Doctor his quest & introducing his new companion. 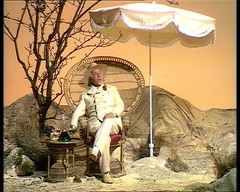 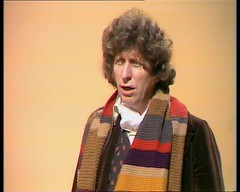 GUARDIAN: The Key to Time is a perfect cube, which maintains the equilibrium of time itself. It consists of six segments, and these segments are scattered and hidden throughout the cosmos. When they are assembled into the cube, they create a power which is too dangerous for any being to possess. 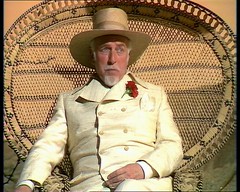 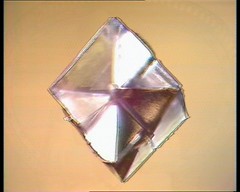 DOCTOR: Well hidden then, I hope, sir.
GUARDIAN: There are times, Doctor, when the forces within the universe upset the balance to such an extent that it becomes necessary to stop everything.
DOCTOR: Stop everything?
GUARDIAN: For a brief moment only.
DOCTOR: Ah.
GUARDIAN: Until the balance is restored. Such a moment is rapidly approaching. These segments must be traced and returned to me before it is too late, before the Universe is plunged into eternal chaos.
DOCTOR: Eternal chaos?
GUARDIAN: Eternal as you understand the term.
DOCTOR: Look, I'm sure there must be plenty of other Time Lords who'd be delighted to
GUARDIAN: I have chosen you.
DOCTOR: Yes, I was afraid you'd say something like that. Ah! You want me to volunteer, isn't that it?
GUARDIAN: Precisely.
DOCTOR: And if I don't?
GUARDIAN: Nothing.
DOCTOR: Nothing? You mean nothing will happen to me?
GUARDIAN: Nothing at all. Ever.
DOCTOR: Ah. What do they look like, these segments? How will I know them?
GUARDIAN: They're all disguised.
DOCTOR: Yes, I thought they might be.
GUARDIAN: They contain the elemental force of the universe. They can be in any shape, form or size.
DOCTOR: Then how will I recognise them?
GUARDIAN: You will be given a locator.
DOCTOR: Thank you.
GUARDIAN: And an assistant.
DOCTOR: An assistant? Please, sir, on an assignment like this, I'd much rather work alone. In my experience, assistants mean trouble. I have to protect them and show them and teach them and couldn't I just, couldn't I just manage with K9?
GUARDIAN: K9 is a mere machine.
DOCTOR: He is a very sensitive machine! Sorry, sir.
GUARDIAN: You will find your assistant waiting for you in the Tardis.
DOCTOR: Very well, sir. If you insist.
GUARDIAN: One final thing, Doctor.
DOCTOR: Yes?
GUARDIAN: I am the White Guardian. In order to maintain the universal balance, there is also a Black Guardian, and he also requires the Key to Time, but for a different purpose. An evil purpose. He must not get it. Doctor, at all costs, you must prevent that.
DOCTOR: How am I to prevent that?
GUARDIAN: Beware the Black Guardian.
DOCTOR: Beware the Black Guardian.
GUARDIAN: Beware. Beware.

The Guardians might have worked better as powerful beings if they'd have been unmentioned previously in the series. The Guardians' roles & positions in the scheme of things are never truly revealed!

Playing the White Guardian in this episode Cyril Luckham, He'll be back in Enlightenment but before then we'll be meeting his opposite number.

Earlier in his career he appeared in the acclaimed An Age of Kings BBC production of William Shakespeare plays where he was the Archbishop of Canterbury in Henry V Part 1: Signs of War. He has a recurring role in Some Mothers Do 'Ave 'Em as Father O'Hara, the priest who appears in The Baby Arrives & Jessica's First Christmas. I've seen him in The Professionals as Judge Hall in The Rack. 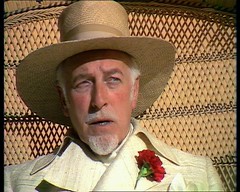 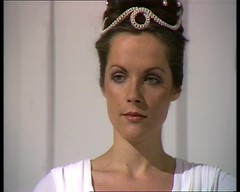 With Louise Jameson's departure at the end of Invasion of Time a new companion was needed. Mary Tamm was cast as Time Lady Romanadvoratrelundar. You can make a decent argument that she is, at this early stage, a slightly better developed version of Rodan from the previous story..... We know Invasion of Time was something of a rush but I wonder if any thought was given to having that character run away with the Doctor at the end of it?

ROMANA: Doctor?
DOCTOR: That's the new assistant.
ROMANA: My name is Romanadvoratrelundar.
DOCTOR: I'm so sorry about that. Is there anything we can do?
ROMANA: The President of the Supreme Council sent me.

Romana believes that she's been sent on her mission by the Time Lord president. Technically isn't that the Doctor? He wasn't shown to relinquish the role in Invasion of Time, though he had lost all memory of being president. The most obvious candidate for Time Lord presidency would be the chancellor, Borusa, who has risen up the ranks in the last two Time Lord stories. Sure enough when we next return to Gallifrey, he's assumed that role.

It's unclear how much time has passed since Invasion of Time but since the Doctor has been travelling by himself while assembling the new K-9 you can, like the gap between Deadly Assassin and Face of Evil, insert any number of stories in between Invasion of Time and here. There's no better place for all the Fourth Doctor's comic stories to occur!

ROMANA: I was told to give you this.
DOCTOR: What's this?
ROMANA: According to my instructions, it's the core to the Key of Time.
DOCTOR: Ah.
ROMANA: Very exciting, isn't it?
DOCTOR: Yes, I suppose it must be for someone as young and inexperienced as you are.
ROMANA: I may be inexperienced, but I did graduate from the Academy with a triple first.
DOCTOR: I suppose you think we should be impressed by that, too?
ROMANA: Well, it's better than scraping through with fifty one percent at the second attempt.
DOCTOR: That information is confidential! That President. I should have thrown him to the Sontarans when I had the chance.
ROMANA: Oh, do you want to know how that works?
DOCTOR: I know how it works.
ROMANA: You have to plug it into your Tardis controls, just there.
DOCTOR: A hole. What's a hole doing in my Tardis?
ROMANA: I put it there.
DOCTOR: You? You put a hole in my Tardis? Never mind, old girl. Never mind. I'll soon have it fixed.
ROMANA: When plugged into the control console, the core indicates the space-time coordinates of each segment of the Key. 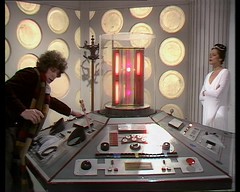 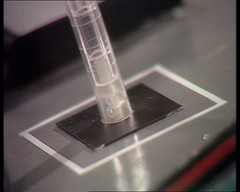 DOCTOR: Oh, that's clever. That's very clever. Ah! Four one eight zero.
ROMANA: I'll look up those coordinates, shall I.
DOCTOR: No, there's no need.
ROMANA: Well, don't you want to know what planet it is?
DOCTOR: I know. Cyrrhenis Minima.
ROMANA: Oh.
DOCTOR: Just a matter of experience, you see.
ROMANA: Yes, of course.
DOCTOR: What else does it do?
ROMANA: Well, it locates the segment at close range once we've landed on the appropriate planet.
DOCTOR: Ah ha. Well, that could be very useful.
ROMANA: And then, when it's brought into contact with a disguised segment, it converts it back into its proper form. What would you like me to do?
DOCTOR: Well. I'd like you to stay out of my way as much as possible and try and keep out of trouble. I don't suppose you can make tea?
ROMANA: Tea?
DOCTOR: No, no, I don't suppose you can. They don't teach you anything useful at the Academy, do they. Gadgets and gimmickry. Never touch, never trust gimmicky gadgets. 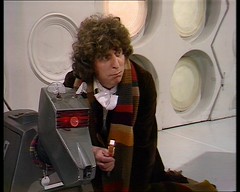 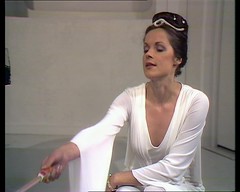 There's quite a bit of early bickering with the Doctor arguing about age vs youth and education over experience.

ROMANA: You're sulking.
DOCTOR: I'm not sulking.
ROMANA: That's ridiculous for somebody as old as you are.
DOCTOR: I'm not old. What?
ROMANA: Seven hundred and fifty nine?
DOCTOR: Seven hundred and fifty six. That's not old, that's just mature.
ROMANA: You've lost count somewhere.
DOCTOR: Well, I ought to know my own age.
ROMANA: Yes, but after the first few centuries, I expect things get a little bit foggy, don't they?

But the thing the Doctor has a real problem with is her name:

DOCTOR: Good. Now, pay attention. I'm not anticipating any trouble, but it's as well to be prepared for these things. Ground rules. Rule one, do exactly as I say. Rule two, stick close to me, and Rule three, let me do all the talking. Is that perfectly clear?
ROMANA: You couldn't make it clearer.
DOCTOR: Good. One more thing. Your name.
ROMANA: What about my name?
DOCTOR: It's too long. By the time I've called look out, what's your name?
ROMANA: Romanadvoratnelundar.
DOCTOR: By the time I've called that out, you could be dead. I'll call you Romana.
ROMANA: I don't like Romana.
DOCTOR: It's either Romana or Fred.
ROMANA: All right, call me Fred.
DOCTOR: Good. Come on, Romana.

So Romana it is from hereon. The name bares some similarity to the surname Romanov, used by the Russian royal family and there's a distinct Russian influence over Ribos including the climate, costumes and architecture.

The second half of the episode is the start of the the first part of the quest where two sets of people in the space of an episode try to break into the strong room containing the crown jewels. Neither escape with the crown: Unstoffe leaves the Jethrik behind, immediately making you suspicious of everything involving the mineral afterwards, and the Doctor & Romana get trapped in there with the beast guarding the jewels!

After becoming producer Graham Williams had become concerned about the random nature of the Doctor's travels. He came up with the idea of The Key To Time as a quest to guide the Doctor's journey. There had been loose links between stories before, notably in the early days of the show, and more obviously in Tom Baker's first season where each story leads into the next. Here the structure is more deliberate. To start the season off Robert Holmes' safe pair of hands write the opening tale. His last story for the program had been The Sunmakers, the previous year. The story before that, Image of the Fendahl, was George Spenton-Foster's first Doctor Who directing job and he returns to direct this tale.