"No one makes a fool of the Graff Vynda-K and lives!"

The Guards accidentally save the Doctor & Romana. Garron presents himself as a merchant to the guard captain and arranges for the Graff's money to be kept in the strong room with the jewels. The Doctor is intrigued by Garron and wonders if he's a crook or an agent of the Black Guardian. Garron shows the Graff the Crown Jewels, but his interest is taken by the Jethrik. Unstoffe, posing as a guard, spins the Graff a tale concerning a lost Jethrik mine and shows him a map. The Doctor & Romana overhear the conversation and conclude that Garron & Unstoffe are conducting a con. Garron tries to get a sizeable deposit from the Graff. The Doctor finds the entrance Garron & Unstoffe used to plant the gemstone and decide to lie in wait for Garron & Unstoffe. The Graff finds a bug in his room and becomes suspicious, but still gives Garron a deposit of 1 million Opecs which all concerned see safely deposited in the strong room. Come night time Unstoffe breaks back into the strong room to retrieve the money & the Jethrik. The Doctor disturbs him and is locked in the strong room, but escapes using the shaft Garron & Unstoffe used. He finds Garron, and Romana watching the conman, but all three are caught by the Graff Vynda K and ordered too be executed.

I'm rather enjoying this, despite it being a very VERY wordy episode. We've got two sets of Holmes double acts, Garron & Unstoffe and the Graff & Shoklah, effectively three if you also include The Doctor and his new companion Romana. This episode makes it obvious that Garron & Unstoffe are con men, attempting to pull off something with the lump of Jethrik they've secreted with the jewels though Unstoffe does rather over egg the pudding:

GARRON: I think that I could strangle you, Unstoffe!
UNSTOFFE: You are doing, you old fool! Get your hands off!
GARRON: Scringe stones, lost mines. I was sweating blood listening to that junk.
UNSTOFFE: Well, I thought it was original.
GARRON: You thought what?
UNSTOFFE: Well, they loved that bit about my poor old dad finding the mine.
GARRON: And that's another thing, you greedy little creep. If you're thinking of selling them that map, just forget it.
UNSTOFFE: A little extra never hurt.
GARRON: Listen, this is a hit-and-run business. One bite and away. If you stick around and give the mark time to think, you're kaput. All you'll collect is a big ball and chain around the ankle.
UNSTOFFE: All right, Garron. I was just trying to display initiative. Hey, what did you think of the accent?
GARRON: My past life flashed before my eyes, that's what I thought of it. This Graff's no softie. He's a big bad soldier, and if he rumbles that he's being conned, then you and I are going to wind up very very
UNSTOFFE: Dead?
GARRON: That's the word I was searching for, so remember it, my boy.
UNSTOFFE: In this matter, I'm in complete agreement with you, Garron. How's it going?
GARRON: Sholakh's fetching the money. One million.
UNSTOFFE: Great. Hey, look, he's got to come back this way. Why don't we wait here and mug him?
GARRON: Stick to the plan. Stick to what's decided.
UNSTOFFE: Doping that beast again? Going down that shaft again?
GARRON: Yes. Now, it's time you got back to the city. We'll meet at the shaft again as arranged.
UNSTOFFE: Right. Hey, er, have you noticed that big fellow, the one with the girl?
GARRON: I've been noticing him quite a lot lately.

Incredibly it's not Unstoffe's performance that leads to them being rumbled, it's the discovery of a bug in the Graff's quarters! And unfortunately that's put the Doctor & Romana in danger.

Playing conman Garron is famous actor Iain Cuthbertson. He's had a long acting career on which I can spot Survivors: Power where he plays McAlister and the TV adaptation of Super GranGraham Williams production, where he plays The Scunner Campbell. He makes an appearance as former DCI Desmond McNutt in the Inspector Morse story Masonic Mysteries. 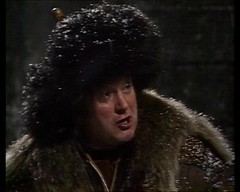 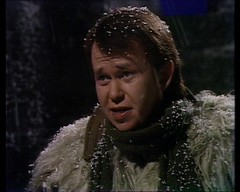 His stooge Unstoffe is Nigel Plaskitt. Primary known for his work as a puppeteer on shows such as Pipkins and Spitting Image. He was known for a role in a series of adverts for Vicks in the 1970s. Recently he's provided the voices of Captain Black & Doctor Gold in Gerry Anderson's New Captain Scarlet

Returning as the Shrieve guard Captain is Prentis Hancock who'd previously been in Spearhead from Space as a reporter , Planet of the Daleks as Vaber and Planet of Evil as Salamar but was best known for playing Paul Morrow in Space 1999. He was also in Survivors as McIntosh in A Little Learning and plays Arnold Meyer in Chocky's Children & Chocky's Challenge, both written by this story's script editor Anthony Read He achieves a rare double by appearing in The Professionals as the Army Major in Lawson's Last Stand in 1982 and then 17 years later in CI5: The New Professionals a Carl Dietrich in Souvenir. You can hear him interviewed in Toby Hadoke's Who's Round #129. 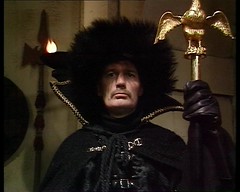 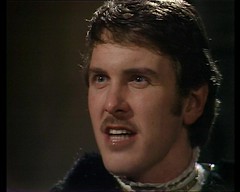 Paul Seed plays the Graff Vynda-K. He'd been in the now missing Doomwatch episode Say Knife, Fat Man as Michael Pratt, which also features former Doctor Who companion Elisabeth Sladen. He's got a Survivors on his CV too playing Grant in The Peacemaker. He's now known as a director having helmed many productions including House of Cards. At the time Seed owned a dog which would perform a trick with a sausage, which Seed demonstrated to Tom Baker. Baker attempted to replicate the trick resulting in him getting bitten on the lip creating the wound which can be seen in this series and the location filming for the next.

The Graff's friend Sholakh is played by Robert Keegan who I don't think I've seen in anything else on his CV. 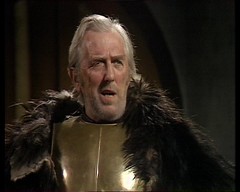 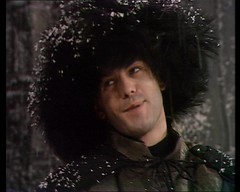 The Shrieve who Unstoffe confronted in the last episode, supposedly in this one too, is former body builder John Hamill. He was in Space: 1999 as Dominix in Force of Life and The Professionals as a Security Guard in Long Shot. The other credited Shrive is Oliver Maguire who played a Thargon General in The Tomorrow People episode War of the Empires: All in the Mind. He's in The Empire Strikes Back as an Imperial Officer. Wookiepedia names his character as Lieutenant Cabbel and has him on board the Star Destroyer damaged by the Hoth Ion Cannon.

HUGE episode for me next week!