"All but one of us is doomed to die! Thus has it been written!"

The Graff goes to fetch the Seeker to assist their search and demands the Shrieve captain bring her to him. Binro volunteers to go back to search for Garron taking Unstoffe's communicator. Garron steals the tracer from Romana and uses it to find Unstoffe. The Doctor sneaks away leaving Romana with K-9. The Seeker starts making predictions of death for the Graff's party. They find Binro in the tunnels and bring him with them. Enraged at their treatment the Shrieve captain sets a cannon up at the entrance of the catacombs. The Graff's party find Garron & Unstoffe and kill Binro. A shrivenzale attacks the party and the Shrieve captain seals the catacombs with his cannon, bringing the roof down on the chamber the Graff's party is in, killing the Graff's lieutenant Shellack. Garron & Unstoffe are trapped and the Jethrik seized by the Graff. K-9 digs Garron & Unstoffe out enabling Romana to retrieve the tracer. The Graff kills the Seeker and gives his final soldier an explosive before loosing his sanity & trying to escape. The Graff detonates the device, killing himself who is carrying the explosives that have been swapped for the Jethrik by the guard is revealed to be the Doctor. The Doctor, Romana & K-9 leave the planet with the Jethrik which the Tracer transforms into the first segment of the Key To Time. 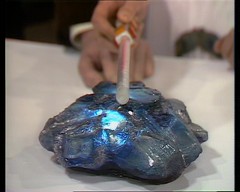 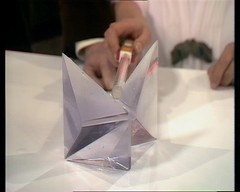 That episode is a bit Doctor-lite: he spends half the episode disguised as a guard with nobody else knowing what's happened to him while the Graff rants and rages! Romana and K-9 are pushed to one side too so essentially the final act in this little drama is played out amongst the characters that Robert Holmes has invented for the story until the Doctor performs two slights of hand, first substituting the explosives for the Jethrik and then beating conman Garron at his own game. 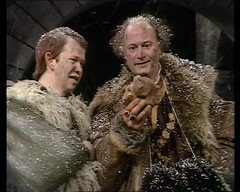 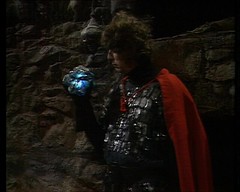 One cast member to mention: IMDB has Barry Summerford down as a Shrieve for just this episode. We last saw him in The Sunmakers as a steaming audience member and he's back in The Armageddon Factor as a guard. If you want to know what he looks like then here he is in the final Blake's 7 episode where he plays a bounty hunter. He has a rare distinction of appearing in both the first and last episodes of that series!

The Ribos Operation has never really appealed to me before, beyond doing a story set in snow - I love snowy background. This with the costumes and sets invokes a Russian Winter feel to the story, indeed Ribos is an anagram of Boris, a popular Russian name and a reference to someone from that country. The new companion's name, Romana, feels like it has Russian derivation too from Romanov. The story almost feels more like a classic serial set in Russia than a Doctor Who story!

But the last couple of times I've seen it, Ribos Operation has worked for me, with the guest cast members' performances particularly catching my attention. While Paul Seed is a fairly typical over the top shouty villain as the Graff Vynda-K, he does get to go completely unhinged in this episode at the death of his long time friend Shoklah. The real star is Iain Cuthbertson as Garron, ably assisted by Nigel Plaskitt's Unstoffe and some florid dialogue from Robert Holmes who looks like he had a great time writing this. 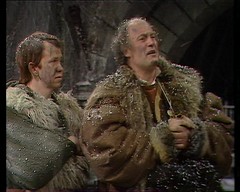 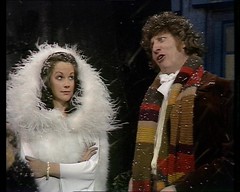 The Ribos Operation was novelised by former companion turned author Ian Marter in 1979. It was released on video in April 1995 on the same day as the Pirate Planet, with Stones of Blood & Androids of Tara following the next month and finally Power of Kroll & Armageddon Factor in June completing the Key To Time season, a set of releases which came with a specially designed spine picture that ran over all six title. While there has never been a video boxset release of the Key To Time, it's only ever been available as a boxset on DVD. In October 2002 all six Key To Time stories were released in Region 1 with minimal extras & restoration to help satisfy the American demand for Tom Baker stories. The Key to Time was then released as a special edition, numbered & limited to 15,000 with brand new extras in Region 2 on the 24th September 2007, which sold out very quickly with this set commanding a premium price on eBay for quite some time. The Key to Time Box Set was reissued in a non limited edition in November 2009 and can now be had for a very reasonable price.

It's Douglas Adams time next week and the first story I saw all the way through on original transmission!