They are taken to the Graff's quarters as the guards survey the strong room and notice the absence of the gold, but when the Graffe notices the Jethrik is gone the guard captain denies all knowledge of it. Unstoffe attempts to contact Garron. The Doctor summons K-9 using his silent dog whistle. The guards search for Unstoffe but he is sheltered by Binro the heretic. The guards summon the seeker, a local mystic, to find the missing gold and the Graff summons his own guards. Garron tells the Doctor & Romana about his past & his methods then the history of the Graff. One of the guards is left behind with orders to the kill the prisoners at dawn. Binro tells Unstoffe of his belief that the lights in the sky are not Ice Crystals, as the people of Ribos believe, but Stars and how he was persecuted for his beliefs. Unstoffe tells him that what he believes is true delighting the old man. The Doctor repairs Garron's damaged communicator using the listening device enabling them to warn Unstoffe that the guards are coming for him, just as K-9 arrives and frees them. Unstoffe goes to hide in the catacombs with Binro. The Doctor & Romana take a tracer reading and realise that the Jethrik is the first segment. The Shrieve guards refuse to go to the catacombs for the Graff's gold, believing the Ice Gods live there. Garron, The Doctor, Romana & K-9 pursue Unstoffe into the catacombs but are cornered by the Graff and his men.

SEEKER: Bones of our fathers, bones of our kings, seek and find. By the flesh that once clothed you, by the spirit that moved you, seek. Seek and find. Seek in the Icetime. Seek in the Suntime. Seek and find!
SHOLAKH: Primitive mumbo jumbo.
GRAFF: They believe in it. The Captain says it never fails.
SEEKER: Come to the circle, gods of the ice. Come to the circle, come to the bones. Show, show, show what I seek! Aiee! I see him. He is at the place of fires.

The Seeker, who is obviously bonkers, and the considered bonkers, but right, Binro The Heretic, are the two characters that stand out here. 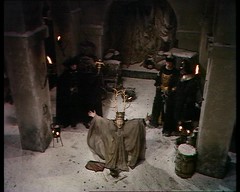 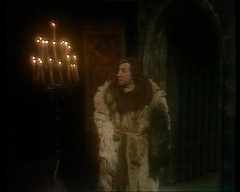 UNSTOFFE: Thank you. Thank you for helping me escape.
BINRO: Oh, it was nothing.
UNSTOFFE: Why'd you do it?
BINRO: Well, I know what it's like when every man's hand is against you.
UNSTOFFE: Binro the Heretic.
BINRO: Oh, you heard that. Well, it wasn't much of a heresy, my friend. Just a little thing.
UNSTOFFE: What?
BINRO: Oh, it was many years ago now. Have you ever looked up at the sky at night, and seen those little lights?
UNSTOFFE: Mmm hmm.
BINRO: They are not ice crystals.
UNSTOFFE: Go on.
BINRO: I believe they are suns, just like our own sun. And perhaps each sun has other worlds of its own, just as Ribos is a world. What do you say to that?
UNSTOFFE: It's an interesting theory. 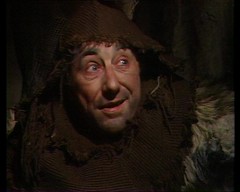 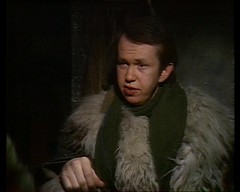 BINRO: What? Hey, a broad-minded man. Perhaps in the north, they are a different people after all. You see, my friend, I have taken measurements of those little lights and of our sun, and I can prove that Ribos moves. It circles our sun, travelling far away and then returning. That's the reason we have our two seasons, Suntime and Icetime.
UNSTOFFE: Nobody believed you.
BINRO: Nah, those blockheads. They prefer to believe that Ribos is some sort of battleground over which the Sun Gods and the Ice Gods fight for supremacy. They said that if I did not publicly recant my belief, the gods would destroy our world.
UNSTOFFE: And did you?
BINRO: In the end. See these hands? Useless for work now. That's why I live here.
UNSTOFFE: Binro, supposing I were to tell you that everything you've just said is absolutely true. There are other worlds, other suns.
BINRO: You believe it too?
UNSTOFFE: I know it for a fact. You see I come from one of those other worlds.
BINRO: You?
UNSTOFFE: I thought I should tell you, because one day, even here, in the future, men will turn to each other and say, Binro was right.

But I'm afraid one moment from this episode stands out for me beyond all others: The Doctor blows his silent dog whistle and out of the Tardis, into the snow, comes K-9. You see on the 16th September 1978 I was there watching and that scene is just etched into my mind. I'd got over my fear of the program, caused by the summer's repeat of the Dalek Invasion of Earth and had finally watched this program that friends and relatives were fans of. And something I saw hooked me and I kept coming back. Bar an odd gap in Power of Kroll I can remember the rest of this season really well. 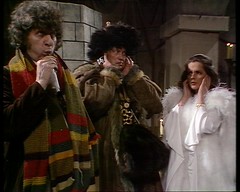 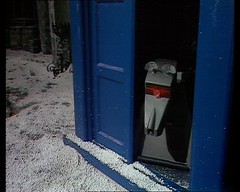 So knowing this episode was coming up I rang my Mum and asked her when we got a television. She's not sure. I can remember not having one, but she can remember us having one in the run up to my second brother being born in October 1977 so I guess we'd have had it for a year and a bit by this point. The television I watched was mainly BBC: Play School, The Clangers, Ivor the Engine and You & Me stand out. I know I would have watched Scooby Doo and other Hanna Barbera cartoons. I can remember Peter Purves presenting Blue Peter which suggests I was watching that by then. On ITV the only things I can remember watching Pipkins, featuring Hartley Hare and this story's Nigel Plaskitt, and Rainbow, featuring K-9's John Leeson as Bungle and Dalek voice Roy Skelton as the voices of Zippy & George. So it was really just Children's programs - I was after all 5 at the time. But from these I can remember very little particular incident. However the sequence from this episode, described above, is clear as day to me. And some things from Pirate Planet, thanks to a repeat, are even clearer.

So from this point on my view of everything - nearly everything - will be shaped by having seen it as I was growing up. In a couple of stories this will shape my thinking somewhat and may lead to opinions that aren't what you might expect approaching something from new now or as an adult.

Binro the heretic is played by Timothy Bateson, another well known actor making his only Doctor Who appearance with a CV as long as his arm. On it I can see the Out of the Unknown episode Tunnel Under the World where he plays Swanson. This episode was long thought lost but recovered in 2005 and is available on the Out of the Unknown DVD Set. He was also in the sci fi disaster movie The Day the Earth Caught Fire as the Printer in Printroom and appears in The Italian Job as Mr Bridger's Dentist. 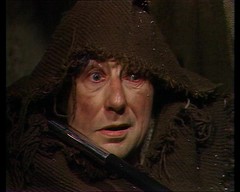 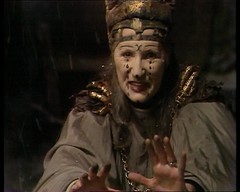 The Seeker is played by Anne Tirard who was Locusta, the palace poisoner, in The Romans. She'd been in the predecessor to Out of the Unknown, Out of This World where she played Mrs. Kane in Target Generation. In amongst the extras this episode we have our two of our old friends: Pat Gorman is Kro, the guard stunned by K-9! 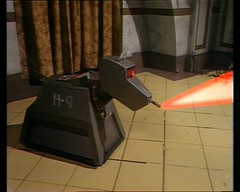 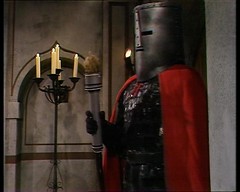 And somewhere amongst the Levithian Guard is Harry 'Aitch Fielder!