"What have we got to lose?"
"Only your claims!"

Leela is captured by the guards but K-9, Bisham & Cordo escape. The outlaws aren't convinced by the Doctor's story and are about to torture him when Cordo returns. Leela is examined by the Collector's medics who discover she has no identity number. The Doctor, Bisham & Mandrell come up with a plan to take over the PCM main control and stop the gas being pumped into the atmosphere. The Collector interrogates Leela. The Doctor starts to take an interest in the company and who they actually are. He dispatches the outlaws to incite the populace to revolution. The Collector crushes the Gatherer's notions of a rebellion forming and tells him of the Doctor's past activities. The Collector decides to have Leela executed by Public Steaming, intending to trap the Doctor when he rescues her. The Doctor deceives the camera system observing him to believe he is pacing on the same spot while he, K-9, Cordo, Bisham & Mandrell break into central control, overpowering the operators, Synge & Hackett, and shutting down the PCM distribution. Hearing of Leela's execution the Doctor plans a rescue. K-9 travels through a vent and blasts a valve. The Doctor enters the steamer through an access tunnel but is told he has only 2 minutes to rescue Leela. But while inside the condenser system runs wild approaching a catastrophic explosion..... 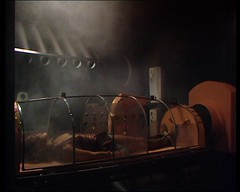 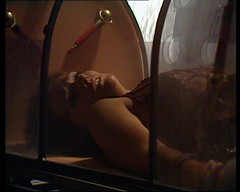 Ah we've not seen this for a while. As soon as the Doctor is able to he decides to overthrow the government.

GOUDRY: He's asking us to help him!
CORDO: No, no, he's not.
DOCTOR: No, no, I'm not. I'm not, Goudry. I'm asking you to help yourselves. Nothing will change round here unless you change it.
CORDO: We have the two guns, and there's K9 upstairs.
VEET: Two guns? What will we do with two guns against all those guards?
DOCTOR: You can't do anything, but there are fifty million people in this city. Think how the guards will react to that number.
GOUDRY: It's crazy talk. Rebellion? No one would support you.
DOCTOR: Given the chance to breathe clean air for a few hours, they might. Have you thought of that?

There's been a bit of the Doctor showing up on alien planets and overthrowing corrupt regimes: Web Planet, The Ark, The Savages, The Macra Terror, The Krotons & The Mutants spring to mind. Up there with Alien Invasion & Base Under Siege it's one of the show's staples yet they've not had a go at doing it for a while now, the Mutants being the last example I can remember.

CORDO: It's true. If we all act together, there's nothing the Company can do.
VEET: If we all act together.
GOUDRY: Yes, let's fight the Company.
VEET: Fight, yes.
DOCTOR: What is this Company? Can anyone tell me that?
MANDRELL: Well, it's just the Company.
GOUDRY: It gave us the suns.
DOCTOR: Shush. I mean, who runs it? What's it for?
BISHAM: It makes a profit, that's what it's for. And the, er, Collector is a sort of high official. There's nobody else.
DOCTOR: A profit?
BISHAM: Yes.
DOCTOR: But who gets the profit? Where does it go?
VEET: Not to us.
BISHAM: They're not questions we've ever thought about. I mean there's no answer.
DOCTOR: Wouldn't it be interesting to find the answer?

Good question, and ones we don't necessarily get answers to. But very relevant today.

There's a nice nod to an earlier Holmes tale: the Collector's computer makes reference to it being a Tellurian colony: Tellurian is the name used for the humans in The Carnival of Monsters.

COLLECTOR: How did you get to Pluto?
LEELA: By accident, as usual.
COMMANDER: Answer respectfully!
LEELA: The Doctor brought me in a machine called a Tardis, if that leaves you any the wiser.
COLLECTOR: What is the Doctor?
LEELA: He is a Time Lord.
COLLECTOR: You were in that criminal attack on the Company Correction Centre. Why?
LEELA: Well, I heard the Doctor was in trouble, so I came to rescue him, but when I got here he'd been set free, so we
COLLECTOR: This interview is terminated. Remove her.
COMMANDER: Erased, Excellency?
COLLECTOR: Not as of now. Place her under pending.
COMMANDER: Immediately, Excellency.
LEELA: Put me down!
COLLECTOR: I'll issue an invoice for erasure by close of business today. Zero zero five. The Time Lords. Specifically one known as the Doctor.
COMPUTER: Zero zero five. Time Lords. Oligarchic rulers of the planet Gallifrey. The planet was classified grade three in the last market survey, its potential for market development being correspondingly low.

But whoever the company are they've heard of the Time Lords and The Doctor:

HADE: Your Hugeness sent for me?
COLLECTOR: You ordered a prisoner to be released from Correction today. Why?
HADE: I can explain, your Amplification. He is the Ajack conspirator sent here to foment rebellion. It is my intention to follow him through the tracker system and identify his contacts.
COLLECTOR: There is no rebellion, Hade, and your so-called Ajack is an alien who landed on this planet by mistake. He is a Time Lord known as the Doctor.
HADE: But how? Your Vastness is certain?
COLLECTOR: I simply checked Company records. This Doctor could be a problem.
HADE: In what way, your Voluminousness?
COLLECTOR: He has a long history of violence and of economic subversion. He will not be sympathetic to my Company's business methods.
HADE: If there's anything I can do to help the Company? Long life the Company.
COLLECTOR: Issue hourly bulletins. Five thousand talmars reward for information leading his capture, dead or alive.
HADE: Magnificent.
COLLECTOR: The money to be paid from your private purse.
HADE: Argh!
COLLECTOR: You spoke?
HADE: Merely a cry of gladness at being so honoured. 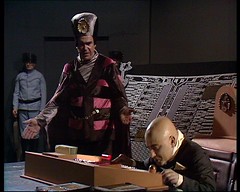 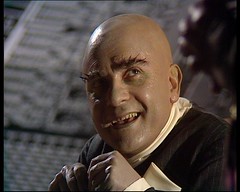 Because Robert Holmes, the inverter of the tissue compression eliminator, is writing this we need to have a novel way to die: So let's steam Leela alive!

COLLECTOR: Also, bulletin information that the Doctor's companion is to be publicly executed for her crimes against the Company.
HADE: Praise the Company for ever and ever. Er, where will the execution be held?
COLLECTOR: In the Exchange Hall. Admission by ticket only, five talmars. Proceeds to the Company Benevolent Fund.
HADE: Enormity will attend?
COLLECTOR: Naturally. The execution will take place during the first work shift. Announce a two hour public holiday without pay.
HADE: The work units will cry with delight. Such generosity is unparalleled.
COLLECTOR: I compute a point oh four seven percent drop in production, which is within acceptable limits. Also, station extra security units in all the subways around the Exchange.
HADE: Extra units, your Globosity?
COLLECTOR: The computer character analysis indicates that the Doctor will try to prevent the execution. With luck, we'll roll two of them into the steamer.

That then leads to a commentary on the lack of attendance at televised sporting events:

COLLECTOR: A poor turnout, Hade.
HADE: Five talmars for only one execution. If we could have offered more victims, made a bigger show of it. Of course, when they can see it all for nothing on the bulletin screens
COLLECTOR: Not the same thing at all. No sense of a shared experience.

And a dig at Hi-Fi fanatics, then enjoying Quadrophonioc Sound, an early version of Surround sound.

COLLECTOR: This is the moment I get a real feeling of job satisfaction. Are the microphones wired in?
HADE: All round the condenser, most Merciful. We're looking forward to excellent duodecaphonic sound.

Shall we sneak a comedy joke in too? The two technicians at PCM control are called Synge & Hackett which is surely a tip of the hat to comedy act Hinge & Brackett!


And, while we're putting Leela in danger, we can send the Doctor into rescue her in pure 1940s serial style as the cliffhanger at the end of the episode!

The lead guest star for the serial is Henry Woolf who plays The Collector. He's probably best known on television for his role in Rutland Weekend Television but you may have seen him in The Sweeney as Jimmy Dancer in I Want the Man. On the big screen he was one of the Transylvanians in The Rocky Horror Picture Show but he's led a long and varied career as you can find out when Toby Hadoke interviews him in Who's Round #155. 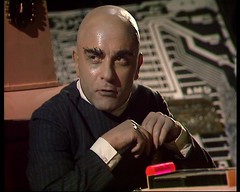 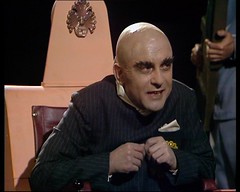 Playing the Guard Commander is Colin McCormack. He's been in most of the big TV action series of the 70s appearing in The Sweeney: The Bigger They Are as David Wade, The Professionals In the Public Interest as Edwards then The Ojuka Situation as The Inspector. He was a Bodyguard in Yes Minister: The Death List, the same episode which featured Michael Keating as a Police Constable. He's also in Inspector Morse: Death Is Now My Neighbour as Hargreaves. 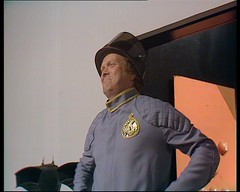 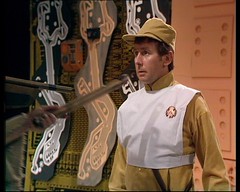 Derek Crewe who plays Synge in this story can be seen as Lefty in two early The Tomorrow People serials: The Slaves of Jedikiah & The Vanishing Earth.

William Simons - Mandrel - is known outside of Doctor Who for playing PC Alf Ventress in Heartbeat. He's also got an appearance in The Sweeney: Money, Money, Money as Maurice Pope. 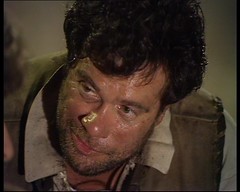 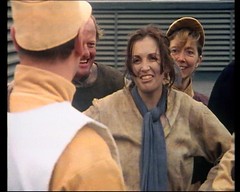 Adrienne Burgess, who plays Veet here was in the Blake's 7 episode Shadow as Hanna and can be seen as a Revered One in Space: 1999: Death's Other Dominion, which is a great episode!