507 Destiny of the Daleks: Episode Two

"You will obey all Dalek commands instantly. You will complete your work schedule. If you fail, you will be exterminated!"

The Daleks take Romana away for interrogation. The Doctor talks to his new friends, the Movellans who are on Skaro conducting a mission against the Daleks. The Daleks, determining that Romana is of no threat send her to work on a slave party clearing rubble. Romana's pursuer is found and taken into the Movellan space ship and, after mistaking the Doctor as it's commander, tells them what he witnessed. His name is Tyssan, an engineer from Earth and he has been a prisoner of the Daleks for two years. The Doctor persuades Tyssan to take him to Dalek control but the Movellans insist on coming with them. Romana fakes her death and is taken away to be buried. The Doctor discovers the Daleks are drilling down through the ruins trying to find something, but he knows a short cut from the surface that they don't. They are discovered and flee, but in the escape the Movellan Lan is destroyed. The Doctor finds Romana's grave but is jolted out of his grief by the arrival of Romana herself, safe and well. Commander Sharrel returns to the ship while The Doctor, Romana and the Movellan Agella descend via a shaft to the lower levels where the Doctor locates Davros, the creator of the Daleks, abandoned and covered in cobwebs. The Daleks break through to the level, burying Agella under tons of rock. Unobserved Davros begins to come back to life..... 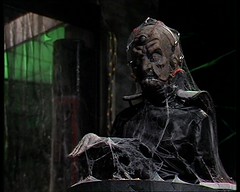 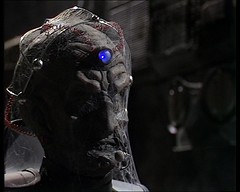 If I'd made it into this episode aged six I reckon that the sequence of Romana being interrogated would have sent me running from the room.

DALEK: Answer. Answer! Answer!
ROMANA: I don't know the answer. Please leave me alone.
DALEK 2: Detector indicates truthful response.
DALEK: We will continue.
DALEK 2: You will not remove your hand from the sensor.
DALEK: Statement. Your purpose in coming here was to sabotage Dalek operations. True or false?
ROMANA: I don't know anything about the Daleks.
DALEK: Answer true or false! Answer! Answer! 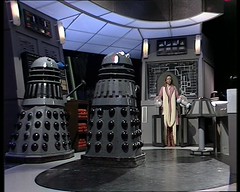 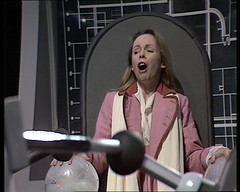 ROMANA: False! False!
DALEK 2: Detector indicates truthful response.
DALEK: Statement. You are in the employ of a space power and have been sent here to spy on the Daleks. True or false?
ROMANA: False! False, false. Leave me alone.
DALEK 2: Detector indicates truthful response.
DALEK: Standard interrogation complete. Report analysis of responses.
DALEK 2: Analysis of responses indicates that subject is category nine.
DALEK: Category nine subjects represent no threat to Dalek security. Release the prisoner.
ROMANA: Does that mean I can go?
DALEK: Humanoids are useful work machines. You have no other value. You will be assigned to labour force two.
ROMANA: Labour force two?
DALEK: You will obey all Dalek commands instantly. You will complete your work schedule. If you fail, you will be exterminated.
DALEK 2: Obey all Dalek commands.
DALEK: Obey instantly.
DALEK 2: Obey without question.
DALEK: Obey.
DALEK 2: Obey.
DALEK: Obey.
DALEK 2: Obey.
DALEK 3: Obey. Obey. Obey.

One singe person surrounded by Daleks asking questions. It's a truly scary sequence, especially if you're younger, and it's one of the last time the Daleks are seen to be acting independently until Remembrance of the Daleks NINE years later.

We left the Doctor at the end of the last episode on the Movellan ship:

DOCTOR: Commander, you must tell me what you're doing here on Skaro. It's vital.
SHARREL: Why? What do you know of Skaro?
DOCTOR: Well, I'll tell you when you tell me what you're doing here.
SHARREL: Very well. I don't see why this should compromise us. Our mission is directed against the force known as the Daleks. A race of evil auto
DOCTOR: Yes, thank you. Thank you, I know.
SHARREL: You know the Daleks?
DOCTOR: Oh, better than you could possibly imagine.

DOCTOR: Commander, the Daleks.
SHARREL: Yes?
DOCTOR: I'm very familiar with their methods. It's vital I know what they're doing here.
SHARREL: That is precisely what I would like to know, too.

That question drives the rest of the episode.

The Doctor hopes the Daleks' escaped prisoner can shed some light on things:

For someone who's escaped from the Daleks Tyssan seems willing enough to venture back into the ruins they're occupying.

TYSSAN: Okay, it's all clear. Come on.
DOCTOR: Go back now. No more chances.
TYSSAN: No, I'll stay. I've nothing to lose. Ever since I was brought here, I've had an awful premonition I'd die on Skaro.
DOCTOR: Well, you wouldn't be the first.
SHARREL: But why should the Daleks come here, Doctor? What is the connection?
DOCTOR: The connection? This is where they were created thousands of years ago. They ravaged the place and left it for dead, as you can see.
SHARREL: That doesn't tell me why they should return.
DOCTOR: No. No, indeed. Burrowing into the ruins of their own city for what? For what? Oh!
AGELLA: You have an idea?
DOCTOR: No. No, it'd be too fantastic even for the Daleks. We'll find all the answers we want in the control room. Come on.

TYSSAN: The main control centre, about five hundred metres up there.
DOCTOR: Good.
TYSSAN: The place will be crawling with Daleks.

For a place "Crawling with Daleks" they actually have remarkably no trouble getting INTO the control room. The insinuation even from the start is it's a very small Dalek force here.

DOCTOR: That looks interesting. Ah ha. Floor plans of the old Kaled city.
TYSSAN: Kaled?
DOCTOR: Yes. Never mind about that. This is the first underground level where we are now.
DOCTOR: That's the second. And if I'm right, the Daleks have penetrated to level there. Which means that their objective must be the third section.
SHARREL: Yes, but what is it?
DOCTOR: I have an uneasy feeling I know. Now. That's odd. There's no plan of the fourth level.
TYSSAN: Perhaps it's been destroyed.
DOCTOR: Yes. Yes. There's a shaft leading directly from the surface to the fourth level which the Daleks can't possibly know about, otherwise they would have come from the surface to the fourth level and burrowed to the third. I wonder.

It turns out the Doctor is right:

We last saw Davros exterminated in the closing moments of Genesis of the Daleks four years previously. We had every reason to believe he was dead. And yet .... 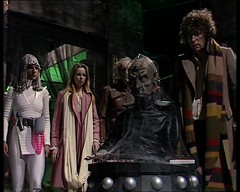 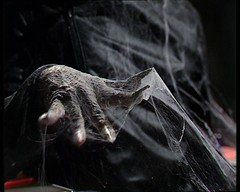 The sequence of Davros coming back to life, presumably because something has disturbed some sensor in his life support system is very creepy. The hand stretching under the cobwebs is great but for me the real moment is when the light on his forehead eye comes on! 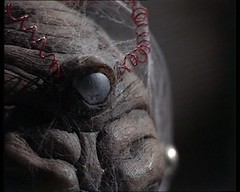 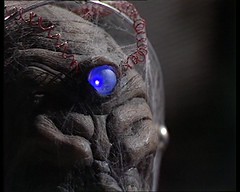 Was the forehead eye illuminated during Genesis of the Daleks? I'm not sure. A quick glance at the pictures I used when we blogged that story shows it as blue there but I can't tell if it has a bulb in it or not. I know I always find the bright light it has in later appearances most odd.

There's a familiar Dalek method of operation on display here:

ROMANA: How long have the Daleks been guarding you?
VELDAN: A long time. I'm from the planet Sirian. The Daleks raided our settlement one day, took more than fifty of us.
JALL: I was a civilian passenger on a space shuttle. The Daleks attacked. I was the only survivor.
VELDAN: They keep their captives in a prison ship in space. Once you're there, your life expectancy tends to be on the short side.
JALL: We thought we were lucky when we were picked to come on this mission.
ROMANA: How many of you?
JALL: About fifty. I thought there might be a chance to escape.
ROMANA: Why didn't you? The burial party I saw wasn't guarded.
VELDAN: Anyone attempting to escape and the Daleks kill five of those remaining. Escape plans are not as popular as they were.
ROMANA: And the Daleks brought you here to do this?
JALL: They've got huge machines to do the drilling, but when it comes to clearing up there's nothing as adaptable as a humanoid.
VELDAN: And nothing as expendable.
ROMANA: The Daleks would be far better off with machines for this job.
JALL: Perhaps they just enjoy subjugating humanoid races.
ROMANA: They used to be humanoid themselves.
DALEK: Silence. Silence. Silence. You will remain silent at all times.

In amongst the labourers we have Veldan, played by David Yip, shortly to find fame as The Chinese Detective. Just after Destiny of the Daleks aired he appeared in the ITV Quatermass as Frank Chen. You can see him in The Professionals episode Discovered in a Graveyard as the Editor, Indiana Jones and the Temple of Doom as Wu Han and the final Roger Moore James Bond film A View to a Kill as Chuck Lee. 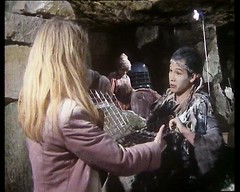 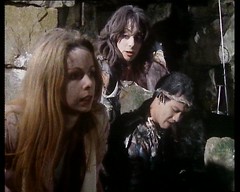 His female friend Jall is played by Greek actress Penny Casdagli. I can't see anything else on IMDB that I recognise her in but a quick google for her name reveals a book she wrote about her father's WWII experiences.

Also amongst the slave workers we have a Planet of Evil Morestran costume! 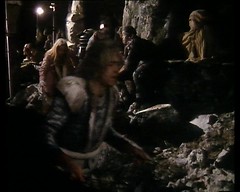 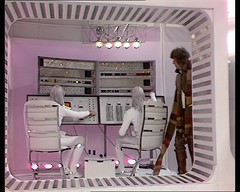 It's not the only reused item in this episode: Oh look, there's the UFO computer banks again in the Movellan ship!

Meanwhile in the Dalek control room we have portions of the panels seen on the doors of the Zeon transmat cubicle in The Armageddon Factor. 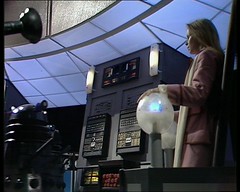 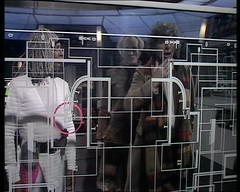 Also in the Dalek control room is the map of one of the lower levels which reappears in the third season Blake's 7 episode Ultraworld.

This episode recorded viewing figures of 12.7 million, easily the smallest of the story but still huge numbers, standing at tenth on the all time list of Doctor Who's highest ratings when broadcast and only dropping to 15th overall because of the huge rating obtained in the next few weeks.

We mentioned yesterday that Season 17 has a peculiar production order with the third story filmed first, followed by the second and then the opening tale. Partially this was down to writer Terry Nation, whose commitments to Blake's 7 would prevent him from producing the scripts in time to film Destiny of the Daleks first. 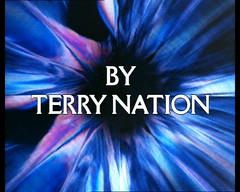 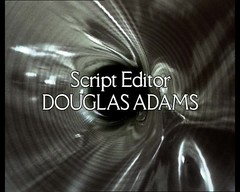 Over the years people have been able to see the effect of various script editors on Terry Nation's work and speculated on exactly how much Terry Nation wrote and how much was done by whoever was in the Script Editor's chair at the time. Here the accusations are a little more specific: on the commentary for the Destiny Of The Daleks DVD director Ken Grieve says that a significant percentage was written by Script Editor Douglas Adams with the percentage varying between 80% & 98% depending on which web source you read (Tardis Databank, Wikipedia and Eye of Horus). So I've checked the commentary and just as they find Romana's grave, that's 44.30 into the feature & 20:20 into this episode, Ken Grieve says that Douglas wrote 98% with producer Graham Williams, and that Terry Nation came up with the ideas. Later in Episode 4, 01:19:10 into the feature/05:00 into the episode, Ken Grieve goes further to claim that Terry Nation "didn't get as far as the dialogue in this show". Which brings us neatly to

DOCTOR: If you're supposed to be the superior race of the universe, why don't you try climbing after us? Bye, bye. 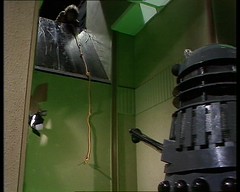 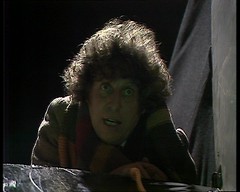 The famous line that the Doctor yells down the shaft at the pursuing Daleks, as seen on this episode's trailer, is always seen as having a dig at their inability to climb, stairs included. However we know from earlier stories that Daleks can climb with the aid of anti gravity discs and before we're done with the classic series we'll see a Dalek going up a flight of stairs. But look at the size & angle of the hole the Doctor's disappeared through - physically the Dalek wouldn't fit through it, especially if it was on an anti gravity disc!