509 Destiny of the Daleks: Episode Four

"Do Not Deviate! Proceed As Ordered! The Space Vehicle Must Be Destroyed!"

As the device clicks towards zero the Doctor is stunned by the Movellans. When zero is reached nothing happens: the Movellans had set it not to detonate. Davros is waiting for a Dalek deep space cruiser to collect him but it will not arrive for six hours. He analyses the data on the Dalek Battlefleet's stalemate with the Movellans. The Movellans prepare to lift off leaving Lan behind to manually activate the Nova device and destroy the surface of Skaro. The Doctor challenges the logical robotic Movellans, demonstrating the limits of what you can accomplish with logic using a game of scissor, paper, stone. The Movellans insist that the Doctor reprogram their computers as Davros will for the Daleks. Lan is overcome by the former slaves and reprogrammed. Davros orders the Movellan ship destroyed by attaching explosives to the majority of the Daleks and sending them to the ship to self destruct. Agella is sent to check on the non-responsive Lan and is also reprogrammed by the former slaves. The slaves & controlled Movellans enter the ship, freeing the Doctor and deactivating the Movellan crew. The Doctor goes to the Dalek base to confront Davros, seeing the explosive laden Daleks as he travels. He enters the base, Davros telling him he intends to destroy the Movellan ship with the remaining Dalek threatening the Doctor. Commander Sharrel is found to be missing and Romana goes to look for him, fearing he will activate the Nova device. Daleks approach the Movellan ship and the freed slaves attempt to repel them using Movellan weapons. Romana prevents Sharrel from activating the Nova device and deactivates him. The Doctor blinds the guarding Dalek with his hat, and the Dalek is destroyed by a ricocheting shot. The Doctor detonates the Daleks explosives before they can reach the Movellan ship. Davros is placed in suspended animation in the Movellan ship and taken to Earth by Tyssan as Romana & The Doctor dig the Tardis out of the rubble it is buried in. 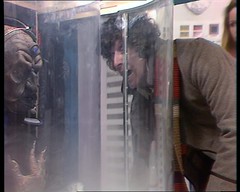 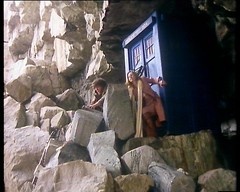 I love Destiny of the Daleks, but I'm not blind to it's faults. To me most of the major ones can be found in this episode.

The first concerns the mocked up Daleks created to boost their numbers: while many complain that the Daleks throughout the story look shoddy I don't mind the majority of the props: they're in the middle of a war, you'd expect them not to look pristine. But the extra props made up for this story are just not up to scratch, needing to be lifted up to be moved. The one left with Davros, at the end of the scene where the Daleks are sent to destroy the Movellan ship, is a particularly bad offender. 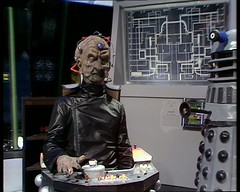 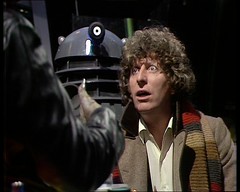 Thankfully it gets substituted for a real casing for the next scene and all the dodgy ones go up in flames at the story's climax. 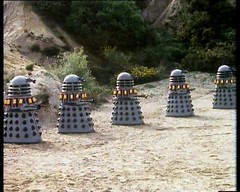 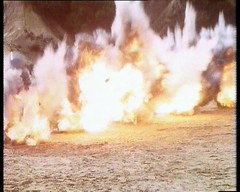 Visit Dalek 6388 for more on the Dalek props used in the story.

DAVROS: My safety is to be your primary concern. You will make any sacrifice that is required to protect me.
DALEK: I obey!

DAVROS: Now, understand me clearly. You will not deviate from your objective no matter what the provocation. Let no opposition halt you. When you reach the Movellan space vehicle, position yourselves around the ship as close as possible to the hull. The sacrifice you make will ensure total Dalek victory in the space war! Carry out your orders!

Then there's the Daleks themselves. They're fab at the very end of episode 1, all through episode 2 and at the start of episode three. But the moment they get their hands on Davros they're effectively relegated to being his goons.

DOCTOR: Robots! Of Course, One race of robots fighting another!

The other problem concerns the Daleks being described as robots: They're not, they're cyborgs, with a "living, bubbling lump of hate" inside each one. It's not a one off mistake either as the mistake is repeated later in the episode:

DAVROS: A concise report and a fascinating problem. The Daleks have met a foe worthy of their powers. Another race of robots.


I can just about live with the idea of the Daleks having completely shed their organic origins but it does jar heavily with everything we'd been told about the Daleks to date.

DOCTOR: Have a go at this Davros: All elephants are pink, Nellie is an elephant, therefore Nellie is pink. Logical?
DAVROS: Perfectly.
DOCTOR: You know what a human would say to that?
TYSSAN: Elephants aren't pink.
DAVROS: Humans don't understand logic.
ROMANA: They are not slaves to it, like the Daleks and the Movelans.

The Daleks have never been slaves to logic before, they're more defined by hatred of anything not like them a trait inherited from their cyborg version of Nazis origin!

Ironically when we next see the Daleks they are evidentially part organic and have become susceptible to a virus developed by the Movellans. Do they revert back to their earlier form to get round the difficulties exposed here ironically making them vulnerable?

There's more reused costumes amongst the slaves this episode but we've covered most of them previously. However there's one poor actress, who I think is Penny Casdagli, who had dialogue with Romana in episode 2, who is seriously struggling with her costume in the location sequences..... 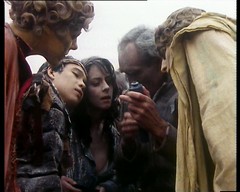 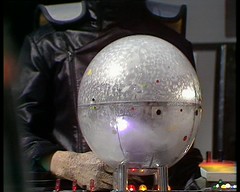 Then there's Davros' Compusphere. I think this is the first time we see this prop but it won't be the last!

SHARELL: We function Logically
DOCTOR: My condolences to you 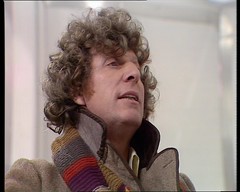 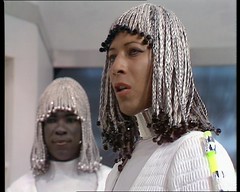 A thought about the Movellans vs the Daleks: is this an attempt to do Cybermen vs Daleks on the cheap? There were several attempts to make a Daleks vs Cybermen story in the sixties, and the central concept here of Daleks vs a logical robotic race seem to be quite similar.

Yes there's a few faults too the story, especially towards the end. But I love it, the first two episodes especially. There are better Doctor Who stories made, but this is my favourite. It's had a diminished reputation amongst fans, especially when held up against the previous Dalek story, Genesis of the Daleks. But it's my first proper encounter with them and nothing can shift the impact it had one me as a child which comes back every time I watch the first episode. When I was the secretary of IFIS, the Royal Holloway Science Fiction and Fantasy society we held a Doctor Who video night to celebrate the show's 30th anniversary in 1993. We showed An Unearthly Child, Destiny of the Daleks & Earthshock and this story went down really well that night!

This is Tom Baker's 128th episode of Doctor Who which brings him equal with Jon Pertwee's total, with only William Hartnell at this point having filmed more episode (134) at this point. 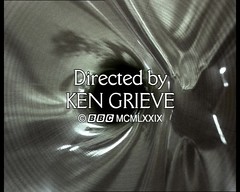 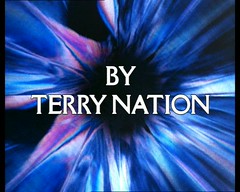 As well as being director Ken Grieve's only contribution to Doctor Who, this is also Terry Nation's final script credit on Doctor Who. He'll continue too work on Blake's 7 till the end of the 1980 season, after which he moved to Los Angeles contributing to, amongst others, MacGyver. In the early 1990s he was involved, with Cybermen creator Gerry Davis, in an attempt to produce Doctor Who independently of the BBC. He died on 9th March 1997.

This story was the first time we'd seen the Daleks since their 1975 appearance in Genesis of the Daleks, four years previously. Another four years would go by before the next Dalek story, Resurrection of the Daleks, though that really should have been made the previous year had things gone to plan. Also if things had gone to plan a Dalek would have seen in season 17's finale Shada but filming was suspended on that story half way through. Instead we have to make do with brief flashbacks in 1981's Logopolis and 1983's Mawdyn Undead before they're next seen in a cameo in 1983's anniversary story the Five Doctors. Although this is the only time we see the Movellans on-screen their presence is felt in the next Dalek story, Resurrection of the Daleks and it's successor Revelation of the Daleks.

DALEK: Dalek superiority will ultimately triumph and the Movellan force will be exterminated.
DAVROS: You have been fighting them for centuries, and still you are not victorious!
DALEK: It is only a matter of time.
DAVROS: No. Two gigantic computerised battle fleets locked together in deep space, hundreds of galactic battle cruisers vying with each other for centuries, and not a shot fired?
DALEK: Our computers are planning the moment of maximum advantage.
DAVROS: And so are theirs. It will never come. You have reached a logical impasse.
DALEK: Understood.
DAVROS: So that is why you have returned to find your creator.
DALEK: You will reprogramme our battle computers for us. The Movellans will be exterminated!

The idea of the Daleks' battle computer needing something will also be returned to, with great effect, in Remembrance of the Daleks nine years later.

This episode produced the highest rating for the story:

The 14.4 million viewers for this episode, aided by the strike that had taken ITV off the air, was a record for Doctor Who to date, breaking the one set the previous week by the third episode. It would be broken twice more in the next four weeks!

Destiny of the Daleks was repeated from the 5th to 8th August 1980. The story was novelised by Terrance Dicks and released just 2 months after broadcast in November 1979. It was the first to bear a cover painted by Andrew Skilleter. I can remember borrowing the novelization from my local library and then having to hide the book in the cupboard because I was so frightened by the Daleks on the cover. So naturally it was one of the first two Doctor Who books my parents bought me for my birthday! Having "acquired" a copy of Destiny of the Daleks on video while I was at university, I bought the official video release when it came out in July 1994 just after I graduated. It was re-released in September 2001 in The Davros Collection VHS boxset, a WHSmiths exclusive, which also contained Genesis of the Daleks, Resurrection of the Daleks, Revelation of the Daleks & Remembrance of the Daleks. Destiny Of The Daleks was released on DVD on 26th November 2007 alongside The Davros Collection DVD Box Set which contained the DVD versions of the five stories in the VHS boxset above.