"I'm afraid I've something of a shock for you, You've overslept by several thousand years!"

The Doctor's activities start to revive the humans bringing one of their leaders Vira round. She revives Sarah, and their leader Lazar, nicknamed Noah. Vira tells them of the solar flares that destroyed all life on Earth. The Doctor tells her that they have overslept by many thousands of years and shows her the insect body. Elsewhere in the station a larvae creature crawls through the darkness. The Doctor investigates a power fault in the solar stack and finds the creature's trail, then it's cocoon as it starts to change. Vira discovers one of their number is missing. Noah holds the Doctor at gunpoint claiming "Earth is ours" then shoots him. The creature starts to emerge from it's cocoon. Noah encounters it in the solar stack and shoots it but as it falls it touches him on the hand. The recovered Doctor, Sarah & Harry go looking for Noah but he finds them and holds them at gunpoint again. Recently revived crewman Libri is scared of Noah when he sees him. A seemingly disorientated Noah orders the resuscitation stopped and leaves. The Doctor finds the remains of an egg shell in Dune's suspended animation pod and tells them that Dune has been consumed by the creature. Noah takes Libri's gun from him and shoots him. He notices his left hand has begun to change ..... 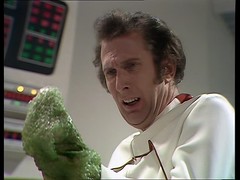 That's not bad, if a little slow. We're half way through the story and hardly anything has happened. Just 3 of the crew of the Ark are awake: one is dead, one is possessed and I think the other is on our side!

Is that the series first use of a bubble wrap monster on the larvae form crawling around and Noah's mutating hand?

Noah's behaviour seems a little strange from the start, he's very antagonistic to the Tardis crew when he finds out that they're aboard:

NOAH: Touch that switch and I'll atomise you.
DOCTOR: Noah!
NOAH: Earth is ours.
DOCTOR: My dear man, if you think for one moment we're laying claim to Earth, you couldn't be more mistaken. We're here to help you.

That "Earth is ours" line in particular could almost make you believe he's controlled by aliens then but his transformation seems to occur after that when he touches the slime in Power stack. So why weren't the Doctor and Harry infected when they examined the slime in the corridor last episode? Does it loose it's potency that quickly? 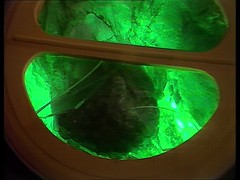 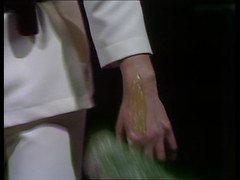 Vira, the chief Medtech on the ship, provides the explanation as to what the humans are doing there before the Doctor starts to explore the threat they face:

DOCTOR: What happened in the last days, Vira?
VIRA: Your colony has no records, no history? Where are you from?
HARRY: London, actually. England. The Earth.
VIRA: That is not possible. The Earth is dead.
DOCTOR: I'm afraid you're probably wrong about that.
VIRA: The solar flares destroyed all life on Earth.
DOCTOR: Ah. Solar flares. I see.
VIRA: Our scientists calculated it would be five thousand years before the biosphere became viable again.
DOCTOR: Oh, the absolute minimum, I'd say. But I'm afraid I've something of a shock for you, Vira.
VIRA: Shock?
DOCTOR: You've overslept by several thousand years. You see, when we came here, we found a massive systems failure.
VIRA: The systems have no capacity for failure.
DOCTOR: Possibly not. But a long time ago, when you were dormant, you had a visitor. Come, I'll show it to you.
VIRA: Is it from space? How did it get here?
DOCTOR: I don't know yet. But observe the size of the brain pan. It had a purpose in coming here, and once inside, it severed most of the satellite's control systems, including your alarm clock, so to speak. 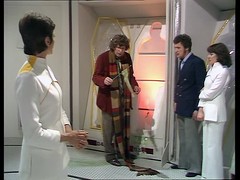 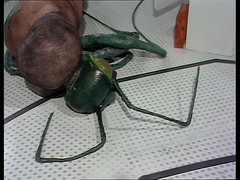 Had nobody noticed the trail to Dune's cryogenic chamber before that?

VIRA: Pallet three. I found it empty.
SARAH: Noah thinks that we're to blame.
HARRY: Chap's jumped ship, that's all. Happens all the time.
SARAH: Oh, come on. A space satellite's a bit different from a ship, Harry.
HARRY: You know, Sarah, I bet you there's the equivalent of a dinghy missing.
DOCTOR: It's not quite empty.
VIRA: Oh, what's that?
DOCTOR: Membrane.
SARAH: Membrane?
DOCTOR: Part of the eggshell.
VIRA: Where's it from?
DOCTOR: It's almost too horrible to think about.
DOCTOR: The egg tube is empty.
VIRA: That thing?
DOCTOR: The progenitor. The queen coloniser.

It then falls to the Doctor to expose the full grisly horror of what has happened to Dune:

DOCTOR: Ever heard of the Eumenes?
HARRY: Eumenes? One of our frigates.
DOCTOR: It's a genus of wasps that paralyses caterpillars and lays its eggs in their bodies. When the larvae emerge, they have a ready made food supply. Strange how the same life patterns recur throughout the universe.
HARRY: Doctor, are you saying that that slug thing?
DOCTOR: Ciliated larvae, Harry. Dune was power systems technician, I imagine.
VIRA: Yes, but how did you know?
DOCTOR: It, or they, went straight to the solar stack.
VIRA: You mean Dune's knowledge
DOCTOR: Has been thoroughly digested, I'm afraid.
SARAH: Don't make jokes like that, Doctor.
DOCTOR: When I say I'm afraid, Sarah, I'm not making jokes.

He is earlier on in the episode though:

DOCTOR: My doctorate is purely honorary, and Harry here is only qualified to work on sailors. 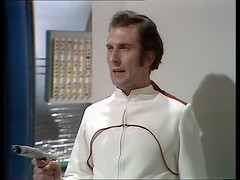 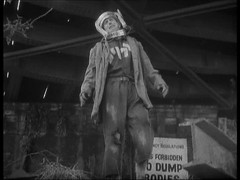 Noah, the commander of The Ark is played by Kenton Moore who'd got a previous Doctor Who appearance to his name as the Roboman that plunges into the Thames at the start of Dalek Invasion of Earth.

As Vira explains "Noah" is actually a nickname:

VIRA: It is a name from mythology. His real name is Lazar, but we called him Noah as an amusement. 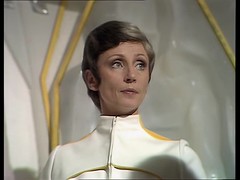 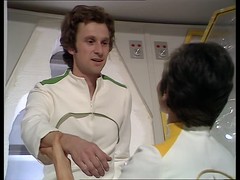 Playing Vira is actress Wendy Williams who was married to Fury from the Deep director Hugh David. This is Williams' only Doctor Who appearance and likewise Christopher Masters, who plays the short lived Libri, doesn't return to the program. Note the different coloured piping on the uniforms perhaps, like Star Trek, signifying department. Red for command, yellow for Medicine and Green for Engineering?

Although Ark in space was the second Fourth Doctor story broadcast it's the third made. Robot was made at the tail end of the Season 11 recording block. The first story in the Season 12 filming black was the Sontaran Experiment, an 2-part all location story. The same director, Rodney Bennett, then helms this story. He gets name checked in the first episode when The Doctor discovers a piece of equipment called a "Bennett Oscillator". The script was written by the show's Script Editor Robert Holmes when the original scripts written by Doctor Who veteran John Lucarotti weren't quite what the production team was looking for. Next up was the season's fifth story, the Revenge of the Cybermen, which as we will see shares some of the same sets followed by Genesis of the Daleks and Terror of the Zygons, which ended up being held back for the start of the show's 13th season.

So although Ark in Space is the first story to bear the name of the show's new producer, Philip Hinchcliffe, it's the second that he filmed. Having come from a script writing & editing background at ITV, Doctor Who was Hinchcliffe's first foray into producing. At the time of writing he and Derrick Sherwin are the only two of the original series of Doctor Who's nine producers still living.