"The Wirrn are here. They will..... We shall absorb the humans. The Earth shall be ours."

The voice of the chief Earth Minister echoes on a recording played through the space station. Noah, struggling against the alien form taking him over, orders everyone revived and taken to Earth before the Wirrn take over and places Vira in command. Harry sets to work reviving more of the remaining humans. Vira & the Doctor seek Noah and encounter him with his arm and much of his head changed. They dissect the Wirrn body they have removing it's brain and connecting it to a monitor which shows it approaching the station and then electrocuting itself. The Larvae emerges from hiding and kills technician Lycett but is driven back using fusion guns. They use the station's transmat to escape to the control centre of the station but after Rogin & Harry travel a power drain occurs and the oxygen pumps are stopped. The Doctor goes to the solar stack to reactivate the power where he finds an open cocoon and is approached by the Wirrn that Noah has become.....

Now we're into classic "base under siege" territory as the Doctor and the small group of humans are trapped and picked off one by one. We've not done this for AGES, possibly as far back as The Seeds of Death. The only thing that's spoiling it for me is that the Wirrn Larvae are so obviously bubble wrap! 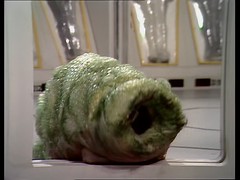 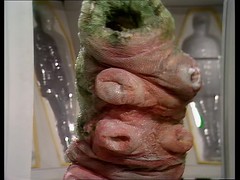 One of the main thrusts of this episode is Noah's transformation into what we now know is a Wirrn. Last episode he was more possessed, with his physical mutation revealed in the closing moments. At the start of this episode, spurred perhaps by the voice of the Earth leader, he regains some control and orders Vira to evacuate the Ark....

NOAH: Vira, hear me. This is an order. Expedite revivification. Commence main phase now.
VIRA: But Noah, the safety checks
NOAH: Ignore safety checks! We, you, are in great danger. Get our, your people to the Earth before
VIRA: Noah?
NOAH: Before the Wirrn. Vira, take command. Now hear me. You take command!
VIRA: What has happened? Commander, are you there?
NOAH: The Wirrn are here. They will ..... We shall absorb the humans. The Earth shall be ours.
VIRA: Noah! Noah!
NOAH: Vira. Vira, there's no time. They're in my mind, getting stronger. Libri is dead. You will all die. Must save our people. You must!

.... but even as he speaks he looses control again 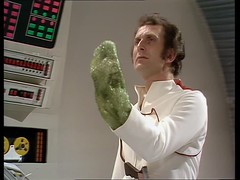 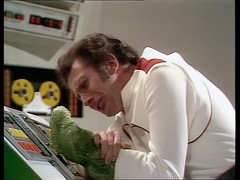 As the episode progresses we see his physical mutation increasing with more of his body being consumed by it. He becomes more confused which then leads to a revelation from Vira:

NOAH: Keep back! Don't touch me!
VIRA: Noah.
NOAH: Keep back, I said!
DOCTOR: Noah, tell us one thing. How much time do we have?
NOAH: Time?
DOCTOR: Before the Wirrn reach their adult form?
NOAH: It feels near, very near. The tearing free and then the great blackness rushing through.
VIRA: Noah and I were pair-bonded for the new life.

Although Noah is a Nickname, for Lazar, Vira would appear to be her real name: the biblical Noah's wife isn't named in the Bible. 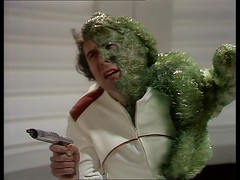 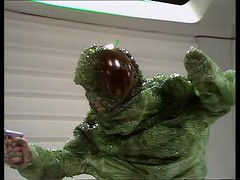 It's in the closing moments of the episode as the Doctor explores the eggs hatchery that the Wirrn have turned the power stack into that Noah's transformation into a full Wirrn is completed: 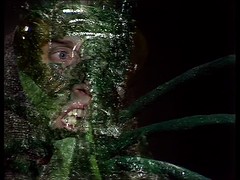 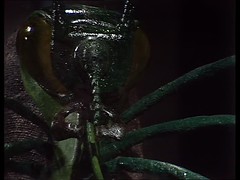 The script has a couple of little nice character moments. Firstly Harry's chauvinistic streak is revealed:

HARRY: Well, I bet that did your female chauvinist heart a power of good.
SARAH: Why?
HARRY: Well, I mean, fancy a member of the fair sex being top of the totem pole.

Now this is actually quite interesting because it suggests some time passes between their departure in Robot and when they return to 20th Century Earth in Terror of the Zygons. I don't think Harry would be making a comment like that if Britain had a female Prime Minister, which it does by the time they return!

The Doctor then confirms for us something we've suspected all along:

DOCTOR: It's not just our existence that's at stake, Sarah. It's the entire human race. It may be irrational of me, but human beings are quite my favourite species.

The production team are evidentially quite proud of the fision gun props that have been manufactured for the story so they give them a close up demonstrating the mechanism built into them: 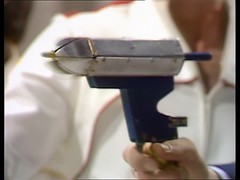 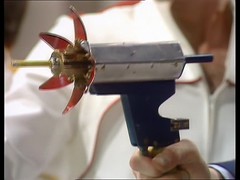 Returning to Doctor Who in this episode is Richardson Morgan, playing the engineer Rogin. He'd previously appeared in 1968's The Web of Fear as Corporal Blake and made a big impression on me when I finally got to see that story when it was recovered. 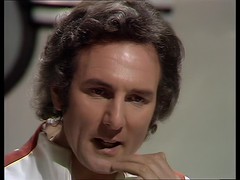 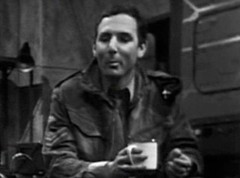 The Wirrn operators in the story have been in many previous Doctor who stories: Terry Walsh was in one of the costumes in the first episode and amongst many appearances on the show as an actor and stuntman was a regular double for both the third and fourth Doctors. Stuart Fell was in both The Curse of Peladon & The Monster of Peladon as Alpha Centauri, the Planet of the Spiders as a tramp, The Android Invasion as a Kraal, The Brain of Morbius as the Morbius Monster, The Masque of Mandragora as an entertainer, The Invasion of Time as a Sontaran and State of Decay as Roga. Nick Hobbs meanwhile was also in both Peladon stories, as Aggedor and was recently Mr Nainby in new series episode Amy's Choice.