390 The Sontaran Experiment: Part One

The Doctor, Sarah & Harry materialise in a circle of silver spheres in the middle of moorland. The Doctor repairs the refractors on the transmat equipment while Sarah & Harry explore. The Doctor is observed by some humans while Harry gets trapped in a hole. One of the humans, Zake, is chased by a robot and falls to his death. The Doctor investigates and is stunned by Zake's friends and thus is missing when Sarah returns for help. Harry escapes through a tunnel and is nowhere to be seen when Sarah returns. Another human, Roth, saves Sarah from the robot and tells of the alien, who controls the robot, who is hiding in the rocks who is capturing and torturing them. Vural, Krans & Erak interrogate the Doctor. They don't believe he came from Nerva station. The Doctor spots an alien device embedded in the clothing of Vural. Roth is scared of returning to the camp because he knows Vural has been captured by the alien and released. He distracts the other enabling Sarah to release the Doctor. They return to the pit seeking Harry, which the Doctor falls into. Harry has escaped from the pit and finds a spherical silver space ship. He sees the robot return with the captured Sarah & Roth. The alien emerges from it's ship, which Sarah identifies as Linx.....

Not a bad episode, but I'm left wondering a few things: Why is everyone suddenly referring to the Ark as Nerva? I don't recall hearing it called that in the Ark in Space - I thought I'd missed something so I went back and checked the script. It's referred to as Nerva three times: once when the computer is talking to Sarah in episode 1, then when the recording of the Earth minister speaks to them all in episode 3 and finally in episode 4 when Vira responds to a communication request. 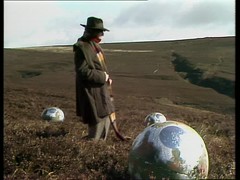 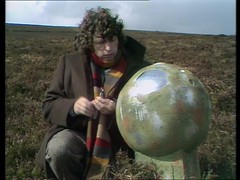 And how did the Transmat station get to Earth? After how ever many thousand years you wouldn't expect them to be still functioning.... But there again they aren't are they? Maybe they were launched from the Ark when the first human was revived...... Either would account for the damage they seem to have received.

HARRY: Oh well, might as well have a recce while we're here. Coming old thing? Coming, Sarah?
DOCTOR: Enjoy yourselves. Trafalgar Square should be that way.
SARAH: Trafalgar Square?
DOCTOR: If this is Piccadilly.
SARAH: You're joking. Aren't you?
DOCTOR: Mind the traffic.

It's a nice touch insinuating that they've materialised on the site of central London with Trafalgar Square and Piccadilly both being mentioned, a conceit that script editor Robert Holmes would reuse some years later in the first four parts of Trial of a Time Lord where we get to see the remains of Marble Arch Underground station. See also Ark in Space part 4 for more links between this pair of stories and the first 4 episodes of Trial.

I know the Doctor was in the middle of repairing the Transmat unit when he heard what called him away but why did he leave his Sonic Screwdriver behind? He takes it everywhere with him! 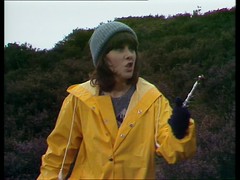 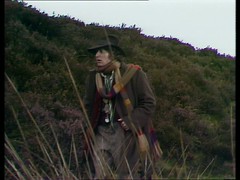 The Doctor is surprised to find anyone on Earth but it turns out the humans there are visitors too:

VURAL: One of our GalSec freighters went missing. We er, we picked up a distress call and came down for a look-see. Soon as we stepped from the ship it was vapourised. Nine of us were stuck here.
DOCTOR: Nine? Where are the rest?
VURAL: Vanished.

That's not strictly true. we see five of the people from GalSec in this episode: Vural, their leader, Zake, Krans, Erak & the slightly unhinged Roth. 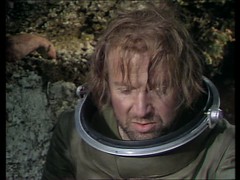 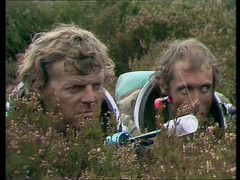 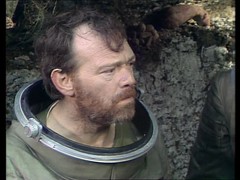 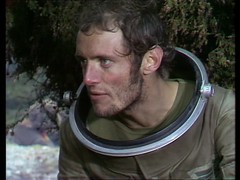 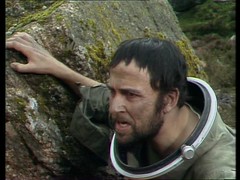 Zake, played by stunt regular Terry Walsh, is killed during this episode, falling down a shaft trying to evade the robot. Roth in turn mentions that Heath & Splier were killed by the alien, do his compatriots not know that? That leaves two unaccounted for, one of which, unnamed, we shall see in the next episode.

The humans from GalSec don't believe The Doctor's story:

VURAL: So you better start telling the truth or you night find things getting a little rough.
DOCTOR: I'm sorry to keep contradicting you, but there is a transmat beam from Space Station Nerva.
KRANS: From where?
DOCTOR: Space Station Nerva.
ERAK: Is he crazy?
KRANS: A joker.
VURAL: You don't expect us to believe that.
DOCTOR: Nerva, transmat beam, Earth. It's as simple as that. Why don't you believe me?
VURAL: Because Nerva doesn't exist, that's why. There's no such place.
DOCTOR: Fascinating. You don't believe it exists, yet you've obviously heard of it.
KRANS: Everybody's heard of the lost colony.
DOCTOR: Lost colony? Ah. You mean it's become a legend like lost Atlantis?
ERAK: Like what?
DOCTOR: Lost Atlantis. It's a legendary city. A go, never mind. This is extremely interesting. Are you going to cut me loose?
VURAL: No, we're going to get the truth out of you first.
KRANS: Too right.
DOCTOR: Very colonial. You are from a colony, I take it?
VURAL: GalSec.
DOCTOR: Of course, on Nerva, they know that various colony ships left Earth. They'll be delighted to know that they're not the sole survivors of the human race. You are human?
KRANS: What do you mean?
ERAK: Of course we are.
DOCTOR: Oh, no offence, no offence.

So did they not notice the space station orbiting the Earth when they came into land then?

Even though his life is at threat the Doctor can't resist teasing the men a bit:

DOCTOR: Yes, well, I can't say I blame him for being wary of friend Vural, at any rate. You know, it's absolutely typical of Harry! How anyone in his proper mind could fall down a whacking great subsidence like. That's it!
SARAH: What is?
DOCTOR: Subsidence! A sewer or something. Maybe it's the Central Line.
SARAH: I'm not with you.
DOCTOR: I mean here must be some way out at the bottom. Hang on, Sarah. I'll just go down and take a look.
SARAH: Hey, you be careful, Doctor. If you break a leg or something, we'll never get you out.
DOCTOR: It's perfectly safe.

Of course it's very unlikely to be the Central line causing subsidence: that's a deep level underground railway, some distance down. The Circle, and it's attached lines the District, Metropolitan and Hammeresmith & City are all sub-surface, much closer to ground level and more likely to collapse.

Having admonished Harry the Doctor then becomes the second person to fall down the shaft which seems like a bit of time wasting. And if you've got just a 2 part story why wait till the end of episode 1 to reveal your monster thus limiting it's appearance to just the second episode? (watch later as King's Demons makes nearly exactly the same error!) The hiding of the Sontaran is compounded by the monster being in the story's name! Yes I know the monster reveal at the end of the first episode is sort of a tradition stretching back to the very first episode but come on we're pushed for screen time here!

As it is the reveal is nearly exactly the same as that of the end of the first Sontaran story, the Time Warrior, shown a year earlier: 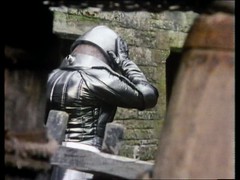 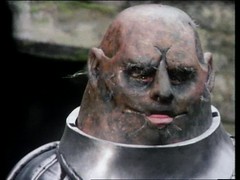 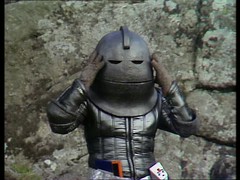 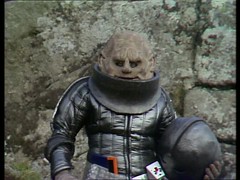 In the defence of writers Bob Baker & Dave Martin, who'd written Claws of Axos, The Mutants & The Three Doctors for the Third Doctor, this is the first 2 part Doctor who story since the Rescue the Rescue in January 1965 and the shortest story since the single part Mission to the Unknown in October later that year. The format would have a revival in the Fifth Doctor's era as it's used to push a season purely made of four part stories up to the 26 episode length required. As it is two 25 minute episodes of Doctor Who, when you remove one set of titles and a recap are almost the same length as modern single episodes.