398 Revenge of the Cybermen: Part One

The Doctor, Sarah & Harry materialise on Nerva Beacon, with the time ring that brought them there vanishing. They immediately find a number of dead bodies left where they had fallen. In a control room beacon operator Warner wards a spaceship away due to a plague infection. A request for information is referred to Commander Stevens who tells Warner to lie. The civilian on the station Professor Kellman questions how much longer Stevens can run the station with just him, Warner & Lester left alive. The Doctor explains to Sarah & Harry they've arrived in an earlier point in the Ark's history when it was still a navigational beacon. Unseen by then a silver creature moves between the bodies. Warner picks up an alien transmission. He thinks it may have come from the Asteroid Voga that they orbit but Kellman insists Voga is lifeless. The Doctor unlocks the door unsealing the section they were in which alerts Warner. Lester & Stevens investigate. On Voga the body of the being making the transmission is taken to Vorus, a Vogan leader, who is planning something with Magrik. Magrik fears the Cybermen may be monitoring them. Warner is attacked by the silver creature and a network of red lines grows on his face. Kellman seizes the recording Warner made, but is disturbed by the Doctor's party arriving next door. They are apprehended by Stevens & Lester, and Kellman shows them Warner. Kellman wants them killed as plague carriers. Kellman monitors the Doctor & Stevens: The Doctor is convinced it's not a plague and wonders about the missing tape. Lester tells them that this is the 79 day of the plague and the station has been isolated during this time. The Doctor recognises the name Voga as the planet of gold that was a key player in the war with the Cybermen. Kellman contacts his allies by a concealed radio: The Cybermen direct their ship towards the station. Harry finds puncture marks on Warner's body and the Doctor begins to suspect what has caused the plague. He visits Kellman's room and searches it discovering the monitoring device & transmitter, but is forced to hide when Kellman returns setting a trap electrifying the floor causing smoke to fill the room. As Sarah waits for the Doctor's return she is attacked by the silver creature which bites her neck...... 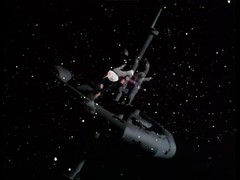 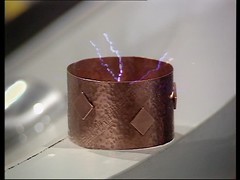 We're back on Nerva station after eight episode wandering round Earth and Skaro. In some respects this idea is similar to the Hartnell story the Ark where they spend two episodes on The Ark leaving earth and two episodes years later arriving on Refusis. Here though we're back at the previous location we saw in Ark in Space some time in the past. 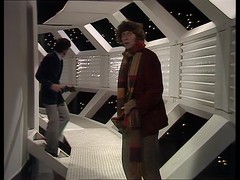 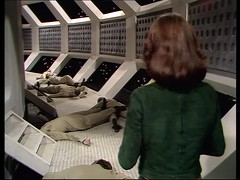 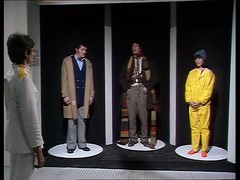 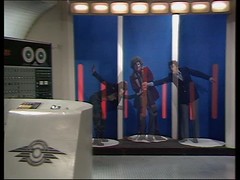 If you look some elements have been altered, the colour of the Transmat booth and the panels round the corridor ring. 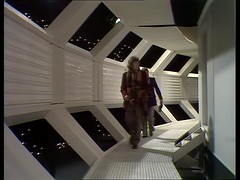 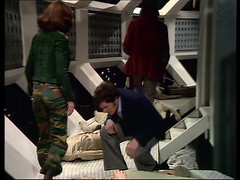 WARNER: Where did that rock come from, anyway? What system?
KELLMAN: Nobody knows. It was first detected in our system fifty years ago and it was captured by Jupiter.

Jupiter is known to capture asteroids due to it's immense gravitational pull and indeed has probably prevented a fair few from colliding with Earth!

There's also some information that's now VERY out of date:

DOCTOR: Who's your civilian?
STEVENSON: Professor Kellman. He's an exographer.
DOCTOR: Interesting. Planetary survey. Of what?
STEVENSON: Jupiter.
DOCTOR: I thought Jupiter had already been thoroughly studied.
STEVENSON: Yes. He's interested in its new satellite.
DOCTOR: What, do you mean there are now thirteen?
STEVENSON: Turned up fifty years ago. That's why this beacon's out here. A lot of the Great Circle freighters haven't got it on their charts yet.

In fact that information was already out of date by the time the episode was broadcast! Jupiter's 12th moon Anake was discovered in 1951 but in September 1974, after the majority of the work on the script had been completed, a 13th Leda was discovered and another, Thermisto sighted later in 1975! Voyager found three more moons but from 1999 onwards a whole slew of moons was detected bringing the current total to 67!

This discrepancy between reality and what was stated on screen obviously irritated Doctor Who author Stephen Cole that he wrote an entire book, To The Slaughter, to explain why Jupiter only had 12 moons in this story!

DOCTOR: What's it called?
STEVENSON: Neo Phobos, originally, but Kellman's renamed it Voga.
DOCTOR: Voga. Of course. Has he been down there?
STEVENSON: Kellman? He set up a transmat. Why?
DOCTOR: Voga. Voga. Planet of gold. Yes, it's all coming back to me now.
STEVENSON: What's coming back to you?
DOCTOR: Cybermen. That's what we're up against, Commander. Cybermen.
STEVENSON: But surely, Doctor, Cybermen died out centuries ago.
DOCTOR: They disappeared after their attack on Voga at the end of the Cyber War. Not the same thing as dying out, Commander. They're utterly ruthless. Total machine creatures. 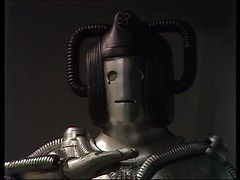 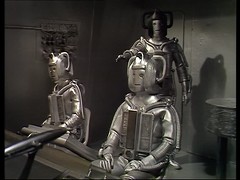 Huzzah, at long last over six years after their last appearance the Cybermen are back. Unfortunately the story mucks their reveal up something chronic. Yes, I know they're in the title but...... They get name checked by the Vogans before they are shown, and then the reveal is three of them standing around in their spaceship. A little wasted perhaps, no big end of episode reveal as they crash through the airlock.

Returning writer Gerry Davis, former Doctor Who script editor and co-creator of the Cybermen raids his own back catalogue for other Cyber elements to insert into this tale. 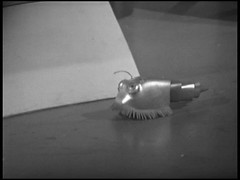 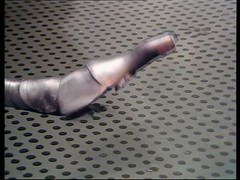 The virus is very similar, involving an updated effect to the one that the Cybermen used in the Moonbase. 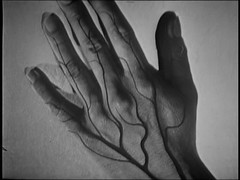 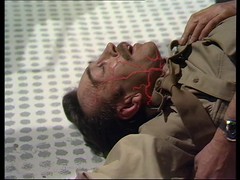 However since all three stories were by some distance in the past reusing them is perfectly fine. And, once you remove the botched Cyberman reveal, so is this episode.


Warner shuffles off this mortal coil during this episode so we probably aught to talk about the actor who plays him now, Alec Wallis, who was previously Leading Telegraphist Bowman in The Sea Devils which, like Revenge of the Cybermen, was directed by Michael Briant. We'll do the rest of the beacon's crew now while we're on the subject. Ronald Leigh-Hunt plays Commander Stevenson and we saw him as Commander Radnor in The Seeds of Death. 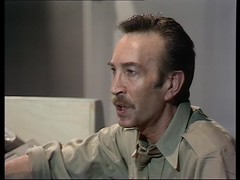 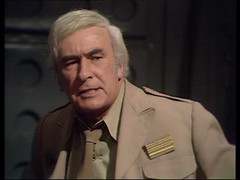 Lester is a bit trusting isn't he: 2 minutes after meeting the Doctor & friends, with air of suspicion still surrounding them he gives Sarah his gun! He's played by William Marlowe who was previously criminal Harry Mailer in The Mind of Evil. Many publications claim he was married to another performer in that story, Fernanda Marlowe, purely on the basis that they share the same surname but this isn't the case. He was married to Catherine Schell (Countess Scarlioni in City of Death) at the time both of his Who appearances were filmed but later married Kismet Delgado, the widow of Roger Delgado, the actor who played the Master in many Pertwee stories. Jeremy Wilkin, playing Kellman, is the only member of the cast with no other Doctor Who appearances to his name. However he was the voice of Virgil Tracy in the second series of Thunderbirds, Captain Ochre & the original Captain Black in Captain Scarlet and was in the very first episode of Blake's 7, The Way Back, as Dev Tarrant. 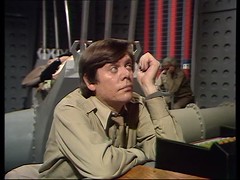 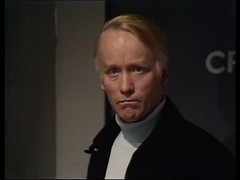 There is what looks like a very bad piece of special effects in this episode:

KELLMAN: What are you doing?
WARNER: Logging it. Unidentified call apparently from the direction of Voga. 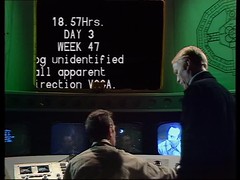 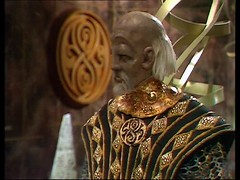 And yes, your eyes are not deceiving you, the thing hanging in the back of Vorus' rooms is what will later become known as the Seal of the High Council of the Time Lords. Designer Roger Murray-Leach worked on this story and the Deadly Assassin where he reused the design in the Gallifreyan Capitol giving it the association it's had ever since. 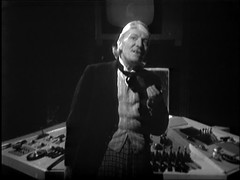 Four days after this episode aired, on 23rd April 1975, William Hartnell died. He'd been suffering from arteriosclerosis for a number of years, then had a number of strokes during the early part of 1975 and died peacefully in his sleep of heart failure on 23 April 1975.