396 Genesis of the Daleks: Part Five

"To hold in my hand, a capsule that contained such power. To know that life and death on such a scale was my choice. To know that the tiny pressure on my thumb, enough to break the glass, would end everything. Yes! I would do it! That power would set me up above the gods! And through the Daleks, I shall have that power!"

Unwilling to see his friends tortured the Doctor surrenders his knowledge of the Daleks' future defeats to Davros who has Nyder record the information onto tape.

DOCTOR: The Dalek invasion of the Earth in the year 2000 was foiled because of an attempt by the Daleks to mine the core of the planet. The magnetic properties of the Earth were... Mars... the Daleks were defeated by a virus that attacked the insulation on the cables in their electrical systems. ...In the space year seventeen thousand was halted by the intervention of a fleet of war rockets from the planet Hyperion. The rockets were made of a metal that was completely resistant to Dalek fire-power. The Dalek Task Force was completely destroyed. 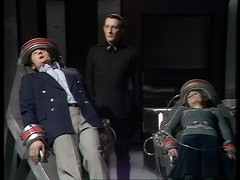 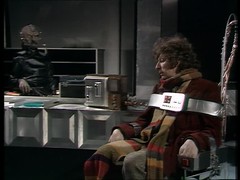 Of the three events mentioned by the Doctor the "Dalek Invasion of Earth in the Year 2000" is the only one we've seen, a reference to the first Doctor story which is confirmed when the Doctor talks about the Daleks' mining Earth's Magnetic Core. The year however is wrong: a calender in Dalek Invasion of Earth episode 1: World's End dates it as 2164. The second statement that the "Daleks were defeated by a virus that attacked their cables of their electrical system" seems to refer to an unseen invasion of Mars, but a very similar virus will be concocted by the Movellans and seen in Resurrection of the Daleks. As yet we haven't seen a fleet from the planet Hyperion intercepting a Dalek invasion of Venus in Space Year 17,000.....

You know if it wasn't for the lengths the Doctor goes to to destroy the tape late in the story I'd say he might have been distorting the truth a little here. How would Davros know>

After they have finished, Sarah & Harry are taken to the cells & imprisoned with Gharman while the tape is secured in Davros' office by Nyder. 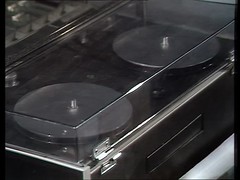 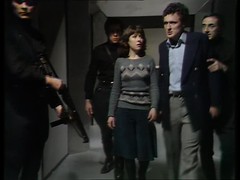 The Elite Guards here are Peter Mantle, Jim Dowdall and Alan Chuntz. Mantle is left at the cells, but Dowdell & Chuntz go off to do another job as we'll see.

Jim Dowdell has previously been Doctor Who: he was a Guerilla in Day of the Daleks three & four, a Thal guard in the third episode of this story as well as a Kaled guard here. He returns as a Warnsman in Frontios but can also be spotted doing stunts in Star Wars and The Empire Strikes Back, where he's a Bespin Security Guard, and in Blake's 7 as a Space Rat.

Karvel approaches the cells to speak with the prisoners. Davros & the Doctor debate the Daleks together:

The Doctor: Davros, for the last time, consider what you are doing. Stop the development of the Daleks!
Davros: Impossible! It is beyond my control. The workshops are already fully automated to produce the Dalek machines.
The Doctor: It's not the machines. It's the minds of the creatures inside them! Minds that you created. They are totally evil!
Davros: Evil?!? No! No, I will not accept that. They are conditioned simply to survive. They can survive only by becoming the dominant species. When all other life forms are suppressed - when the Daleks are the supreme rulers of the universe - then, you will have peace. Wars will end. They are the power not of evil, but of good.
The Doctor: Davros, if you had created a virus in your laboratory, something contagious and infectious that killed on contact, a virus that would destroy all other forms of life; would you allow its use?
Davros: It is an interesting conjecture.
The Doctor: Would you do it?
Davros: The only living thing... The microscopic organism... reigning supreme... A fascinating idea.
The Doctor: But would you do it? 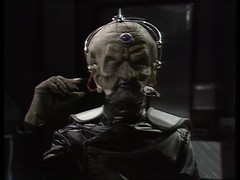 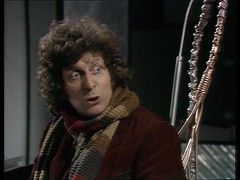 Davros: Yes; yes. To hold in my hand, a capsule that contained such power. To know that life and death on such a scale was my choice. To know that the tiny pressure on my thumb, enough to break the glass, would end everything. Yes! I would do it! That power would set me up above the gods! And through the Daleks, I shall have that power!

Awwww yeah. One of THE great scenes in Doctor Who. Davros & The Doctor talk philosophy. Michael Wisher's delivery of the conclusion is superb, going from quietly contemplative to full raving megalomaniac. Fabulous scene.

The Doctor shuts off his life support system in an attempt to force Davros to destroy the Daleks, but Nyder arrives saving his master and has the Doctor returned to the cells. Davros orders the Daleks back to the Bunker. 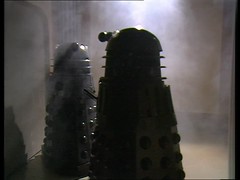 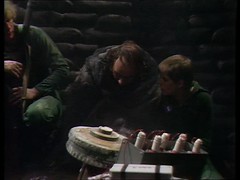 Bettan decides to move her group of survivors on towards the Bunker. Nyder is overpowered by Harry & Gharman, but escapes. Gharman starts to raise the opposition against Davros who arm themselves. 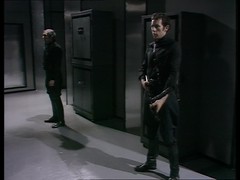 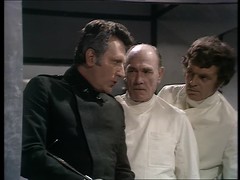 So we've got stuntmen Chuntz and Dowdell by the weapons lockers. Gharman is briefing scientists played by stuntmen Paddy Ryan & Terry Walsh. Do we think there might be a fight any second?

Looking at Ryan post fight it's pretty obvious he's more in the "throwing yourself about business" rather than being a scientist! This is his only Doctor who appearance but he's done stunt work for loads of things you'll have heard of. They've been joined now by Harry Van Engle, the only one of the recurring background Kaled scientists in this episode. 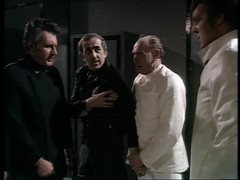 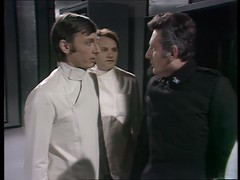 Fighting breaks out between the two factions. Davros orders Nyder to surrender to the opposition and organise a meeting between him and their leaders. Meanwhile the Doctor and his friend find the broken into arms locker and obtain some explosives. 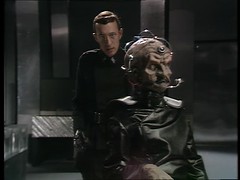 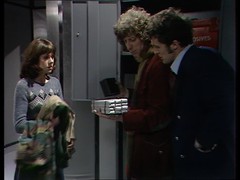 I'd never twigged before that the arms locker is the one we saw being guarded earlier!

The locker contains another costume change for Sarah: she'd been wearing clothes from the Tardis which she'd put on at the end of Ark in Space and worn through The Sontaran Experiment, but left the waterproof from that outfit in the Thal holding cell. Now She obtains some camoflage gear which she'll wear through Revenge of the Cybermen. Revenge was made first so this might be a matter of find some way for Sarah to change costume so her clothes match!

The Doctor & his friends go to the incubator room to try to destroy the Dalek embryos. 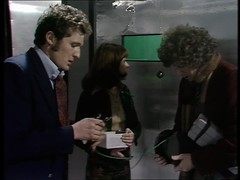 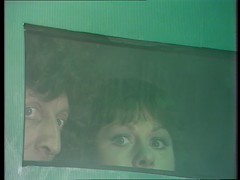 The contents of the room are still hidden from us as per it's previous appearances all we see is the green glow.

Davros meets Gharman, Kavell and the leaders of the rebellion against him. He asks to address a full meeting of the elite where a vote will be taken. 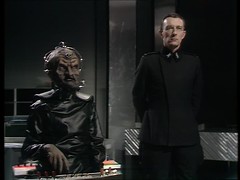 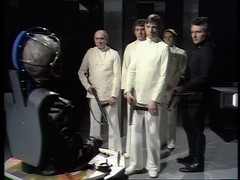 The Daleks returning to the Bunker pass Bettan's group of Thal survivors sheltering in the Kaled trenches. 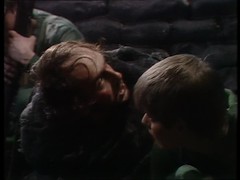 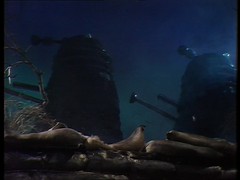 Lovely shots again of the Daleks against the sky, superb. You forget that Daleks are quite small so to make them more imposing it's a good trick to shoot them from low down, one that several other directors have used including Douglas Camfield in the Dalek Masterplan.

Sarah becomes worried at how long the Doctor is taking in the incubator room.

Harry is a Naval Doctor by profession but appears to be quite handy with that det cable! 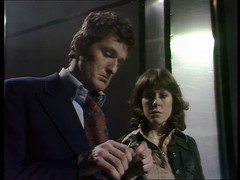 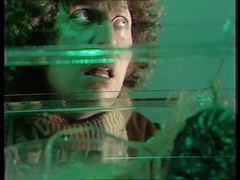 Even now we're inside the incubator room all we really see if bubbling liquid and things in jars.

As the Doctor is laying charges in the room he is assaulted by one of the creatures that attempts to strangle him..... 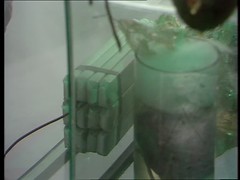 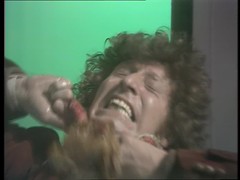 A very talky episode, dominated by the debate between Davros & The Doctor. As I said above it's a fabulous scene, letting you in to Davros' mind, removing any doubt that what he's doing is purely for the survival of his species. It's interesting comparing that with the Doctor's thought process in the next episode....

Against that there's not a lot of action, bar the brief ruckus at the arms locker, and we don't see much of the Daleks either: a brief glimpse in the city then as they're travelling back to the bunker. However you suspect there might be a few exterminations to come in the final part of the story!