399 Revenge of the Cybermen: Part Two

"All resistance overcome. The Beacon is ours."

The Doctor escapes from the room and hearing Sarah's scrams rushes to the crew room where he finds her having been bitten by a Cybermat. The Doctor & Harry take her to the Transmat to use it to purge the poison from her system but they find the pentallion drive removed and the Transmat not functioning, concluding Kellman is responsible and working for the Cybermen. The Doctor jury rigs a replacement circuit while Stevens & Lester go to arrest Kellman who is now armed. Sarah & Harry are transmatted to Voga but the circuit explodes stranding them there. Harry finds gold, which is abundant on the planet, but his curiosity gets them into trouble when they are found and captured by the Vogans. Lester & Stevens capture & disarm Kellman. The Doctor explains to Lester & Stevens that the Cybermen are allergic to gold because it clogs their breathing apparatus. The Doctor threatens Kellman with the Cybermat as the Cybermen approach the station. Harry & Sarah are taken to Vorus who seems to know a lot about what has been happening on the beacon and tells them only four humans were meant to be left alive. Vorus is summoned by councillor Tyrum. Kellman tells the Doctor where the missing pentallion drive is. Tyrum sends his militia into the gold mines to relieve Vorus' guardians under protest from Vorus. Fighting breaks out between the two factions. The Doctor reactivates the transmat but using it fails to return Sarah & Harry who escape from their gold chains and are taken to Tyrum. The Cybership nears the station and docks. Stevens, Lester & The Doctor attempt to stop them but the Cybermen open fire and all three are gunned down!

It takes a while for the Cybermen to properly show up in this story. They pop up here and there through the first two episodes but don't get to interact with anyone else until the end of the episode when they storm the beacon. So half way through the story and effectively they've only just showed up. For a monster that I've not seen for six years I'd be wanting a bit more a bit sooner. Gerry Davies, who's been busy writing Doomwatch since his last Doctor Who (1967's The Tomb of the Cybermen), has used this structure with the Cybermen before: They're not fully revealed in either The Moonbase or Tomb of the Cybermen till the end of the second episode. As we've said this is the first proper Cybermen story for six and half years, although they had brief cameos in The War Games, Mind of Evil & Carnival of Monsters. As is traditional for the Cybermen they've had a redesign. Essentially these Cybermen are the Invasion version wearing the Moonbase/Tomb chest units with cabling on the limbs replaced by ribbed vacuum cleaner hose which also surrounds the tubes projecting from the head. 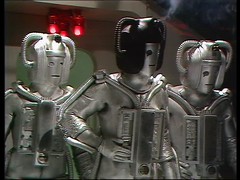 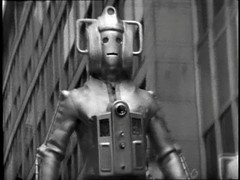 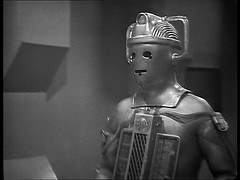 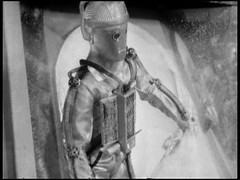 The Invasion Cybermen are the successors to the Wheel in Space version, but are the most major redesign. The retain the tear-drops on the eyes and circle at the top of the chest unit, caused by the Wheel Cybermen wearing their chest units upside down! So it's a little odd to see the earlier chest unit return especially mounted the right way up! It's interesting seeing all four versions together and looking at how the Cybermen have evolved in appearance.

Since we last saw the Cybermen they've gained a new weakness!

DOCTOR: Voga, otherwise known as the Planet of Gold, is hated and feared by Cybermen because gold is lethal to them.
STEVENSON: How?
DOCTOR: It's the perfect non-corrodible metal. It plates their breathing apparatus and in effect suffocates them.

Clogs their breathing apparatus? That's a little strange since we saw Cybermen operating in a vacuum in The Moonbase & Wheel in Space so I would have thought that they didn't need to breathe. I suppose you could argue that they need to take in air in environments where it's present or the ones from space have been specially adapted.... The gold allergy joins a lengthy list of Cyber weaknesses which also includes radiation (Tenth Planet), gravity & plastic solvents (The Moonbase) and emotions (The Invasion, see they did it in the classic series too take that everyone who hated the end of Closing Time!). Unlike the other weaknesses this one sticks and resurfaces in Earthshock and Silver Nemesis.

For the first time we get a designated Cyberleader, who has a black helmet with a silver face plate. The Cybermen now have no hand weapons and instead fire blasts from the "lamp" on their helmet, previously a flat disc, which is now four tubes. 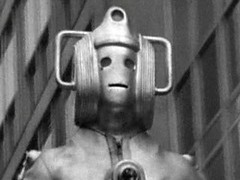 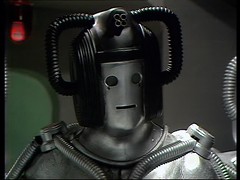 Neither of the Cybermen with their names listed in speaking roles have played the monsters before but both have been in Doctor Who previously. The Cyberleader, Christopher Robbie was in the Mind Robber as the Karkus while the credited Cyberman Melville Jones was a guard in The Time Monster. Other non speaking Cybermen include Tony Lord, a guard in Monster of Peladon, and regular extra Pat Gorman who, amongst his myriad other credits, had been a Cyberman in The Invasion and would repeat the role in Attack of the Cybermen!

Onto the Vogan cast members in this story: Playing Vorus is David Collings on his Doctor Who debut. He'll return as Poul in The Robots of Death (directed by Michael Briant) and Mawdryn in Mawdryn Undead. He's best known to telefantasy fans for playing Silver in Sapphire & Steel. His rocket scientist Magrik is played by Michael Wisher who we've just seen in Genesis of the Daleks as Davros although the story was recorded after Revenge of the Cybermen. See Genesis of the Daleks episode 2 for a complete list of his Doctor Who roles. 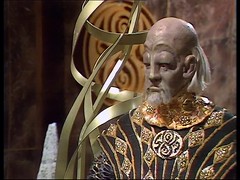 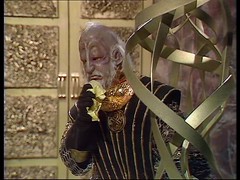 Vogan Elder Tyrum is a final Doctor Who role for Kevin Stoney who was Mavic Chen in The Daleks' Master Plan and Tobias Vaughan in The Invasion, both directed by Douglas Camfield. In 1984 his death was erroneously reported by fan publication Doctor Who Bulletin so it was a great shock to fans when he appeared on stage at a 1987 convention! He eventually passed away in 2008, aged 86, after a long battle with skin cancer. Brian Grellis is Sheprah and we'll see him again as Safran in The Invisible Enemy and the Megaphone Man in Snakedance. 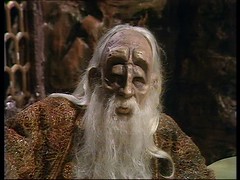 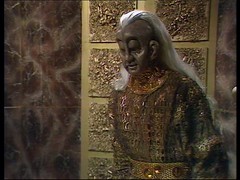 Stuntman Terry Walsh is also credited on IMDB as Sherpah: I'm guessing this is something to do with the location filming in the tunnels. 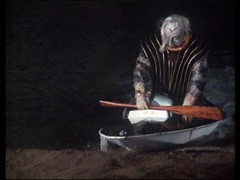 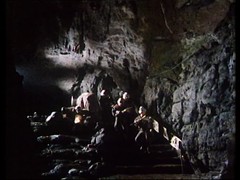 This is the first look we've got of the location, filmed underground in Wookey Hole, more of which next episode, and it looks fabulous! 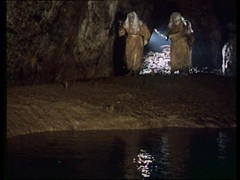 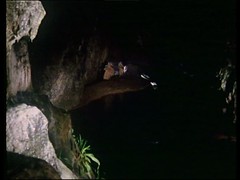 There were two little cart trains used in Genesis of the Daleks: The Kaleds had one and the Thals were using one to load their rocket. Here's another in the Vogan caves. 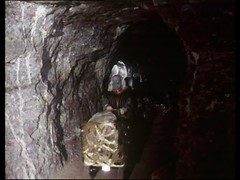 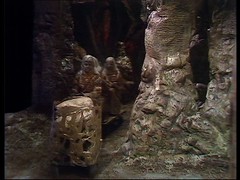 What's interesting about this one is that it appears in studio and on location!