400 Revenge of the Cybermen: Part Three

"You've no home planet, no influence, nothing. You're just a pathetic bunch of tin soldiers skulking about the galaxy in an ancient spaceship."

Sarah & Harry are taken to Tyrum. Kellman briefs the Cybermen on Voga. He goes to Voga, ostensibly to check the Transmat is working. The Cybermen intend to destroy Voga so Stevens, Lester & The Doctor are sent to Voga by Transmat with powerful Cyberbombs strapped to them. Kellman attempts to find Vorus but is captured by Tyrum's men. The Cybermen escorting the Doctor & the humans are attacked by Vogans. Kellman tells Tyrum of Vorus' plan to launch a rocket at the beacon destroying the remaining Cybermen. The Cybermen move through the caves killing any Vogan they find as the Doctor & the humans move towards their target. Sarah goes transmats back to the beacon to warn the Doctor. Vorus prepares to launch his Skystriker rocket at the beacon but fears he has run out of time now the Cybermen have arrived with their bombs. Harry & Kellman attempt to find the Doctor & his party but cause a cave in killing Kellman and knocking the bomb carriers out. Harry attempts to free The Doctor from his bomb harness little knowing that the harness is booby trapped...... 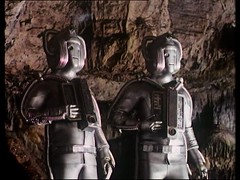 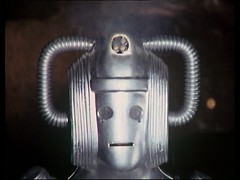 There aren't that many Cybermen in this episode but you get an idea of how powerful they're meant to be as the two on Voga move through the caves seemingly impervious to everything the Vogans throw at them. Where's the so called Glitter Guns that we hear about during this episode? Given that the Cybermen have showed up you'd expect them to be armed with an appropriate weapon quick enough!

Got a little first from the Cyberleader here:

LEADER: This is the main shaft?
KELLMAN: Yes, this is a shaft I explored for you. It runs right to the core of Voga.
LEADER: How far from the shaft entrance is the transmat receptor area?
KELLMAN: Just a matter of yards. I set the receptors as close as possible.
LEADER: Excellent, Kellman. You have done well. The humans will carry the explosives into the shaft.

Yes it's out first Excellent! He likes it so much he gives it two more airings:

CYBERMAN: Our warriors report all initial opposition has been crushed.
LEADER: Excellent. They are now one hundred metres below the surface.

CYBERMAN: Average progress rate is fifty metres per minute.
LEADER: Excellent. They will be in the central chamber of Voga.

Meanwhile the Cybermen coerce someone into doing their dirty work for them:

LEADER: And you, Doctor, and your two friends will help us in this task. That is why your lives have been spared.
STEVENSON: I was wondering why you hadn't killed us.
LESTER: We don't have to help them. They can't force us.
LEADER: Oh, you are mistaken.
LESTER: You'll discover who's mistaken, chum.
LEADER: The heart of Voga is almost pure gold. Gold is hostile to our function, therefore Kellman was asked to preserve three animal organisms for this purpose.
DOCTOR: Isn't it wonderful to feel needed, Commander? 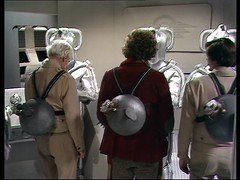 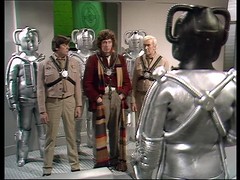 LEADER: Cyberbombs, the most compact and powerful explosive devices ever invented.
DOCTOR: Yes, and their use was banned by the Armageddon Convention.
LEADER: Cybermen do not subscribe to any theory of morality in war, Doctor. Our calculations indicate that two bombs placed in the central fissure of Voga will fragmatise the planet.
DOCTOR: Fragmatise? Oh well, I suppose we can't expect decent English from a machine.
LEADER: Prime the buckles. Two bombs should be sufficient. Three will make certain.
STEVENSON: Now what have they done?
LEADER: The buckles are now primed. Any attempt to remove the harness before the countdown reaches the red zone will cause a secondary explosion. Do you understand?
LESTER: You mean, if we attempt to release the harness before then, we'll get blown up.
LEADER: Correct. It is as well to keep that thought in your minds.
DOCTOR: And when we reach the centre of Voga, we'll be fragmatised, as you put it.
LEADER: Incorrect. You will have fourteen minutes, the time period of the red zone, to reach your surface and save yourselves by the transmat beam.
STEVENSON: That is not long enough.
LEADER: Fourteen minutes is considered adequate.
DOCTOR: Anything else before we go?
LEADER: Yes, Doctor. Your progress will be followed by radar. Any attempt to deviate from the planned course will be immediately detected and the bombs exploded by means of these manual controls.
DOCTOR: Thank you.
LEADER: Countdown has commenced. You, Doctor, will leave first.
DOCTOR: Careful, careful. I might explode.

That's not going to end well, is it?

The idea that the Cybermen have been lured here by the ability to destroy a threat to them but it actually being a trap to destroy the Cybermen appeals to me. Both sides here, the Cybermen and the Vogans, have been greatly reduced by their conflict and wish to re-obtain their former greatness:

TYRUM: You're insane, Vorus. You've brought about the destruction of our race.
VORUS: I wanted to bring them freedom, Tyrum. Freedom from fear, freedom to live as Vogans should, on the surface, not cowering like worms in the earth.

Compare that to this exchange between the Doctor & Cyberleader:

DOCTOR: You've no home planet, no influence, nothing. You're just a pathetic bunch of tin soldiers skulking about the galaxy in an ancient spaceship.
LEADER: You speak unwisely. We are destined to be rulers of all the cosmos.
DOCTOR: No, I don't think so, somehow. You tried that once and you were nearly wiped out.
LEADER: Because of Voga and its gold. If humans had not had the resources of Voga, the Cyber War would have ended in glorious triumph.
DOCTOR: It was a glorious triumph, for human ingenuity. They discovered your weakness and invented the glitter gun, and that was the end of Cybermen except as gold-plated souvenirs that people use as hat stands.
LESTER: Watch it, Doctor. I think you've riled him.
LEADER: That is why Voga must be destroyed before we begin our second campaign.
DOCTOR: Oh, there's to be a second campaign, is there?
LEADER: We have enough parts in our ship to build an entirely new Cyber Army, and this time, Doctor, it will be invincible. Cybermen function more efficiently than animal organisms. That is why we will rule the galaxy.
DOCTOR: Loose thinking. The trouble with Cybermen is they've got hydraulic muscles, and of course hydraulic brains to go with them.

A clip showing the Doctor's first line from this exchange was reused in Earthshock episode 2 in 1982. 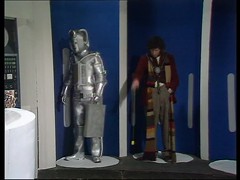 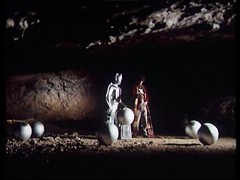 There's a couple of lovely touches with the transmat in this episode as the Doctor beams down playing with a yoyo and Sarah's crossing her fingers, actions that are continued from departure to destination giving a continuity even though one point was shot in studio and the other on location some weeks apart. 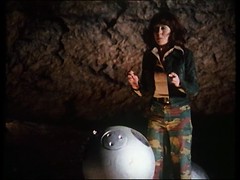 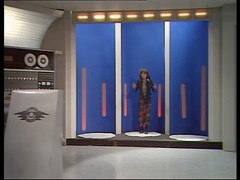 And if you think the transmat terminal in the caves looks familiar, then you're right: it's exactly the same sphere arrangement seen a few episodes earlier in the Sontaran Experiment, except there they were assembled out in the open. 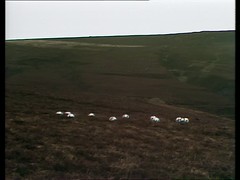 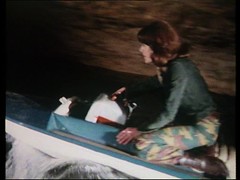 Location filming for this story was conducted at Wookey Hole in Somerset (itself an actual location in the Doctor Who New Adventure novel Blood Heat) between the 18th-21st November 1974. The filming there was plagued by accidents: an electrician broke his leg, Elisabeth Sladen's motorboat went out of control throwing her into the water where she nearly drowned and the stuntmen who rescued her was injured getting her out of the water. Some members of the cast & crew attributed the incidents to a local curse but in reality most of the incidents can be ascribed to the small amount of air in the caves being consumed by a larger than usual number of people.

The location filming for this story has been homaged by The League of Gentlemen in the fifth episode of their first television series. Mark Gatiss, a future Doctor Who writer and actor, plays a cave guide in the fictional Stump Hole Cavern and at one point says

This particular cavern might be familiar from it’s countless appearances on the small screen. In 1974 you couldn’t move down here for Cyber Men. In fact, in an amusing incident, Tom Baker sprained his ankle on that rock there…

A live version of this sketch can be found on YouTube but I'd suggest you don't watch it at work!

Lovely bit of almost Douglas Adamsesque comedy from the Doctor as they troop round the caves with the bombs strapped to them:

LESTER: Why don't we just wait here?
DOCTOR: I think my idea's better.
LESTER: What is your idea?
DOCTOR: I don't know yet. That's the trouble with ideas. They only come a bit at a time.

The story is nicely bound together with some great music from composer Carey Blyton, doing the music for his third and final Doctor who story having previously worked on The Silurians and then the previous season's Death to the Daleks, also directed by Michael Briant who's in charge here too. The sort of heavy ponderous metallic theme for the Cybermen is fabulous. There's over 5 minutes worth of it on the 4 disc Doctor Who - The 50th Anniversary Collection CD, which is well worth owning, and more on the now our of print limited edition 11 disc set.

Like Magrik actor Michael Wisher several of the supporting artists playing Vogans were also in Genesis of the Daleks, so we've seen them already even though there appearance in this was filmed first: Barry Summerford & Roy Caeser were both Kaled Elite Guards,
David Billa was various Thals and Cy Town, as per usual, was inside a Dalek. Leslie Weekes had been in Mission to the Unknown as a Varga Plant and The Mind of Evil episode Three as a UNIT Soldier. He'll be back in The Masque of Mandragora as a Peasant villager in part one and a brother in part 3. Finally a big welcome back to Harry Fielder, appearing for the first time since 1968's Wheel in Space where he was a wheel Crewmember in episode 1 & 2. He'd made his debut earlier that year as a Central European Guard in The Enemy of the World episodes 2 & 3 and will return as a guard in The Seeds of Doom parts three and four, he's actually credited in 4, the Second Assassin in The Face of Evil part one, which gets him an appearance on the commentary, a Titan Base Crewman in The Invisible Enemy part one, a Levithian Guard in The Ribos Operation part three, a Guard in The Armageddon Factor part two, another credited role, a Tigellan in Meglos part one and a security guard in Castrovalva part one. He's got a fair few episodes of Blake's 7 to his name: an Armed Crewman in Space Fall & Cygnus Alpha, a Scavenger in Deliverance and a Federation Trooper in Weapon, Trial, Voice from the Past, Children of Auron, Games, Warlord & Blake. During his career Aitch has been in everything and his website & book are well worth a look. He's not been too well of late so hope you're feeling better soon!.