401 Revenge of the Cybermen: Part Four

"It means we're heading for the biggest bang in history!"

Lester stops Harry from removing the bomb harness. Harry explains what has happened. Stevens continues on the planned course while The Doctor, Harry & Lester attack the Cybermen in the caves with gold. Vorus & Tyrum argue over Vorus' actions. The Doctor's attack goes wrong and Lester is killed destroying the Cybermen with his bomb. The Doctor turns off the Cybermen's monitoring device. They attempt to set off the bombs remotely but Sarah interrupts them, getting herself captured. However the detonation is prevented by the Doctor's sabotage. The Doctor confers with the Vogan leaders and decides to transmat back to the station to deal with the Cybermen and rescue Sarah. The Cybermen set the Beacon on a course to collide with Voga, loading it with bombs and preparing to leave on their spaceship. The Doctor uses the Cybermat to attack the Cybermen with gold. Vorus, worried by the station's movement, launches the rocket early and is gunned down by the other Vogans. The Doctor & Sarah are captured by the Cybermen and tied up in the Beacon's control room powerless to do anything. The Cybermen leave as the Beacon moves towards Voga. The Doctor & Sarah escape their bonds and get the Vogans to divert the rocket towards the Cybership which is destroyed. The Doctor wrestles with the Ark's controls preventing it from hitting Voga. The Tardis arrives at the Ark as Harry returns by Transmat, but they all leave quickly as The Doctor finds a message from the Brigadier summoning him back to Earth ....

The episode closes with the travellers finally being re-united with The Tardis, after a 3 story and 11 episode absence (Ark in Space 4 is the last time it appeared). 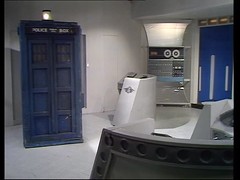 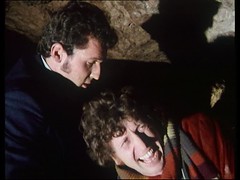 But the episode opens by returning to a very familiar theme this season....

LESTER: Harry, don't touch it. Open that buckle and you'll be blown to kingdom come.
HARRY: You mean it's booby trapped?
LESTER: These buckles can't be opened until the Cybermen beam the release signal.
DOCTOR: Harry, were you trying to undo this?
HARRY: Well, naturally.
DOCTOR: Did you make the rocks fall, Harry?
HARRY: Er, well, I suppose I must have done, yes.
DOCTOR: Harry Sullivan is an imbecile!

Harry later demonstrates that maybe his memory isn't that great either:

DOCTOR: So where is Sarah?
HARRY: I'm not sure, Doctor. When I last saw her, she was trying to get back to the Beacon.
DOCTOR: What?
HARRY: Yes. You see, we thought you were still up there, and she naturally wanted to warn you about the rocket. Sorry, I can see you're not with me.
DOCTOR: Harry, I'm not with you.
HARRY: No, you see, it seems that Kellman, er, he's dead, by the way. Kellman was really working for the Vogan people, and he got the other half, the, what do you call them?
STEVENSON: Cybermen.
HARRY: Cybermen, that's right. Terribly bad on names. Got the Cybermen up on the Beacon so that they'd be sitting ducks for the Vogan's rocket. Only the Vogans haven't finished the rocket yet, so things have gone a bit wrong.

Just a bit. we'll come back to Vorus' plan with the rocket in a moment.....

But just like last episode he displays his ambitions:

TYRUM: As the human said, recrimination is pointless now. But I promise you, Vorus, if by some miracle our planet should survive, you will face trial for treason.
VORUS: It's you who should be tried, Tyram. You and your creeping sycophantinous city.
TYRUM: As leader of the Guardians, you abused your trust. You opened the route to the surface. You made clandestine contact with aliens, and you beamed radio transmissions out into space. There are no greater crimes in our calendar.
VORUS: In your calendar, Tyram! Your cowering, furtive, underworld life. If we survive, I will face trial gladly. I will give the people my reasons. I wanted to free them from this tyranny of dark, living rock.
TYRUM: Living the way we had for generations, at least we were safe, Vorus. Safe from the genocidal threat of the Cybermen.
VORUS: I had a dream.
TYRUM: A folly, conceived out of arrogance through overweening ambition.
VORUS: We could have traded with other worlds, exchanged our gold for armaments. We could have been strong enough to defend ourselves against Cybermen or any other attackers.


As I said last episode this is what the story is about: two groups of people wanting more than what they've got and each planning to achieve it by getting rid of the other!

As "bonkers Cyberman plans" go, Revenge is nearly sensible: Capture the beacon, Transmat the humans to Voga carrying the bombs and blow them up. You're guessing they use the humans to avoid getting killed by the gold. Except they then send two Cybermen down anyway who the Doctor promptly attacks with the gold. No matter, we'll load the beacon with explosives and crash it into Voga. Well if you've that much explosive why not just transmat it down and blow the planet up from there? 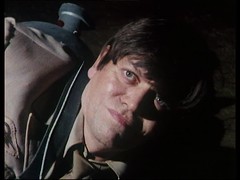 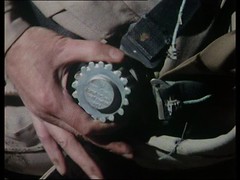 Except, as Lester's sacrifice shows, the Cyberbombs may not be all they're cracked up to be. The supposed all powerful Cyberbombs have enough force to kill a human and 2 Cyberman but there's enough of Lester left for Harry to be checking his body to make sure he's dead. They're going to destroy a planet with just two of those? 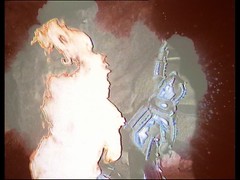 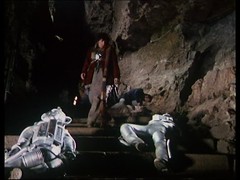 You have to assume Kellman, an exographer, had found some weak spot in Voga the Cybermen where the planets weak..... and now we're peering at the details the cracks are beginning to show.

Still it's a bit more solid than Vorus' plan to blow the Cybermen up with a rocket that he's only finishing as they show up! 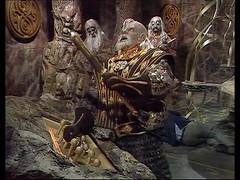 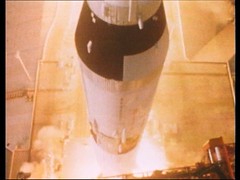 They've cheated again by using NASA footage for the rocket launch but there's some nice modelwork elsewhere in the episode. 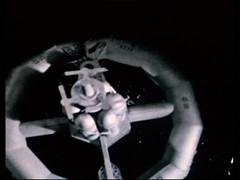 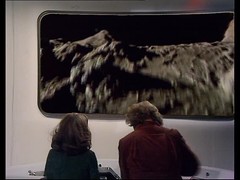 One truly dodgy special effects sequence in this episode involved Voga's planet surface on a roller being spun round in front of the camera. Unfortunately the roller is a bit small making the effect look very poor!

Other than that it's not a bad episode with a nice bit of action and tension and far more Cybermen than I remember there being..... 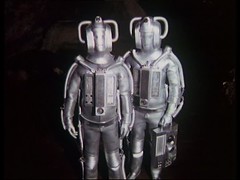 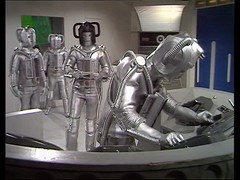 .... which is a good thing really as we now bid farewell to the Cybermen, who we'd not seen for six and a bit year, for nearly another SEVEN. This episode was shown on 10 May 1975 and, barring an aborted cameo in Shada and a flashback in Logopolis, they wouldn't be seen till 09 March 1982 when they made their surprise comeback. In fact during the entire rest of Tom Baker's reign there's only two returning monster stories: The Sontarans in the Time Warrior and the Daleks in Destiny of the Daleks. Include the Master's appearances and this number rises, but he's more of a villain than a monster and two of those are right at the end of the fourth Doctor's reign. The majority of this period is done without any resort to the show's back catalogue of monsters, though we do get to see the Time Lords on a more regular basis.

We also good bye now, this time permanently, to Gerry Davis, co-creator of the Cybermen and former Doctor who script editor for the last year of the first Doctor and first year of the second. In the 1980s he worked in America, including collaborating on an attempt with Terry Nation on a bid to take over production of Doctor Who. He died on 31 August 1991.

Revenge of the Cybermen also marks the end of the shortest season (so far) in Doctor Who's history at 20 episodes, beating the 25 episodes for Seasons 7 & 8. Even if Terror of the Zygons, recorded at the end of season 12 but eventually shown at the start of season 13, had been shown with season 12 it would have only been 24 episodes long. As it was the practice of holding a story over to the start of the next season was commonplace in the early seventies. The short season here enabled filming to resume earlier than usual in the summer of 1975 and for the show to return not in January 1976 but in September 1975, giving that year 35 episodes of Doctor Who, the most since 1968.

Revenge of the Cybermen was novelised by Terrance Dicks, the only one of Gerry Davis' four Cybermen scripts not be adapted by Davis himself. My local library had it and it was a very early Doctor Who read, before Earthshock happened. In fact my library had all the stories this season, bar Ark in Space, and generally a very strong representation of the last two Pertwee and first two Baker series.

Revenge of the Cybermen was the very first Doctor Who story to be released on video cassette as a compilation version on both VHS & Beta Max formats in October 1983. The story has it that fans at the BBC's Celebration event at Longleat were polled on what story they'd like to see released. They chose Tomb of the Cybermen, which at the time was missing from the archives but it's absence wasn't generally known. So BBC Video chose the first complete story they could find with the Cybermen in it. Following the grand tradition set by Target books the cover to the first release of the video featured the wrong type of Cyberman. We'll forgive the neon logo on the box because it was the current Doctor Who logo at the time.... It was quickly reissued in the packaging standard that would become the template for the Doctor Who videos with only the font used for the story title being carried over. This design would be kept for the majority of the videos up until 1996 when the covers were redesigned. In 1999 Revenge of the Cybermen was reissued on video in episodic format.

Revenge of the Cybermen was one of two Doctor Who stories to be issued on Laserdisc in the UK by the BBC - the other being Brain of Morbius.

Revenge of the Cybermen was issued on DVD as part of Doctor Who - The Cybermen Box Set with Silver Nemesis on 9 August 2010 setting a record of the longest gap between initial release on video and release on DVD.