402 Terror of the Zygons: Part One

"This one they call the Doctor is a threat to us. Already he has found out too much. He must be destroyed!"

At sea an oil rig is destroyed. The Doctor and his companions have arrived in Scotland and hitch a lift on the road, being picked up by His Grace, The Duke of Forghill, who takes them to the Village of Tulloch where UNIT are operating out of the local pub. The Brigadier has been talking with Mr Huckle from the oil firm. On a local beach a survivor from the oil rig is washed up. The Brigadier explains to the Doctor about three oil rigs being destroyed. Radio blackouts occur just before the rigs are destroyed. Sarah speaks to the local pub landlord but their conversation is observed on a monitor screen by alien eyes. Harry finds the survivor on the beach, but both are shot by the Duke's gillie. The Doctor & Sarah are summoned the local infirmary where Harry has been taken as the aliens direct something under the water which attacks another rig. The Doctor examines some of the wreckage and deduces that it has been bitten into by making a plaster cast of from the damage. The aliens observing them decide the Doctor must be destroyed. Harry starts to come round, leading Sarah to summon the Doctor. But as she speaks on the phone one of the aliens appears in the corridor behind her.... 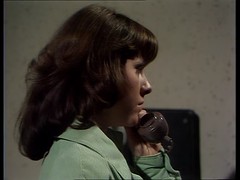 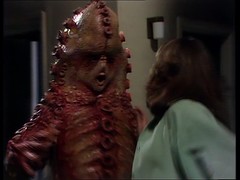 Ah that's decent stuff. I criticised Revenge of the Cybermen for bungling their monster reveal but it's done a lot better here with little hints - eyes and hands - before the reveal at the end of the episode as the monster ambushes Sarah. 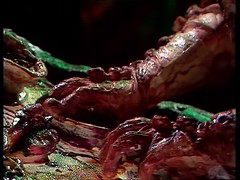 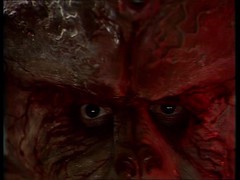 Destroyed oil rigs might make long term fans of the show automatically think Sea Devils, but as we can see it's not them. But given that this story is set in Scotland are we being drawn towards thinking another rather more famous aquatic monster is responsible?

DOCTOR: You say these radio blackouts have happened before?
HUCKLE: Each time a rig has disappeared.
DOCTOR: And no strange craft in the area? Nothing suspicious?
HUCKLE: Difficult to be sure. It was at night. The radio picked up some strange sound, but as far as we know, the sea was calm and empty.
DOCTOR: It may be calm, but it's never empty. 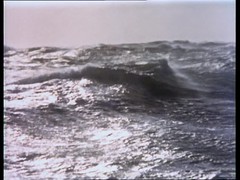 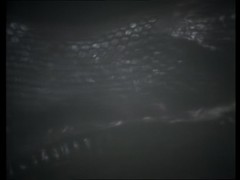 HUCKLE: Doctor, do you mind telling us exactly what you're doing?
DOCTOR: A little experiment in orthodontology, Mister Huckle.
HUCKLE: Orthodontology?
DOCTOR: Teeth. Teeth. The scientific study of teeth. 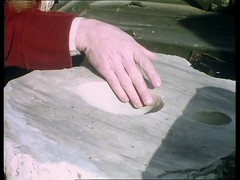 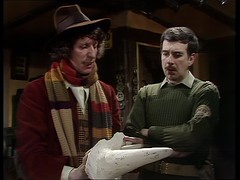 DOCTOR: It's the cast of a tooth, wouldn't you say?
HUCKLE: Teeth? Doctor, you can't be serious.
DOCTOR: Teeth are very serious things, Mister Huckle.
HUCKLE: Look. Lets get this straight. Are you trying to tell me that the rigs were chewed up by a set of giant molars?
DOCTOR: Yes. A set of giant molars that can chew through solid steel as easily as paper.
BRIGADIER: Are you suggesting that we're dealing with some kind of sea monster?
DOCTOR: Yes. A monster of frightening size and power.

The Oil Rig Names, Ben Nevis and Bonnie Prince Charlie, have obvious Scottish connotations, but how about the oil field itself? It's named Waverley, which automatically puts me in the mind of Edinburgh Waverley station, which in turn gets it's name from The Waverley Novels by Scottish author Sir Walter Scott.

Meanwhile there's a hint that the oil rigs disappearing isn't the only thing that isn't right....

SARAH: He's a strange man, this Duke, isn't he?
McRANALD: Would you think so, Miss? You know, I would give it a favour to remember he is the McRanald, my clan chief.
SARAH: Oh, of course. No, no, it was just that, well, after he picked us up in his car, he never spoke a word all the way to the village.
McRANALD: Ah well, it's true he's no the Duke I remember. He's been a different man since the oil companies came.


Back to the show comes our old friend Douglas Camfield following his heart problems and disagreements with Jon Pertwee on the set of Inferno. And if Camfield is back then that means the music isn't by Dudley Simpson, due to their long running feud. Instead Geoffrey Burgon provides the incidental music and a large portion of it can be found on Doctor Who - The 50th Anniversary Collection (CD). 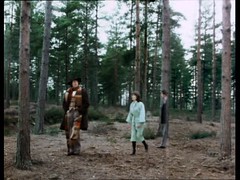 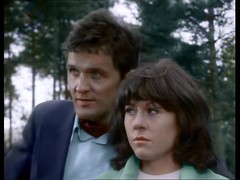 For years this episodes had a legendary missing scene of an invisible Tardis materialising in the woods at the start, similar to one in a previous Camfield story, The Invasion. . It's in the novel but was never seen on screen. When it was filmed a problem was discovered with the film, so it was cut and long thought lost until a black & white copy was uncovered during preparation work for the DVD. Stuart Humphryes, aka Babelcolour, hand recoloured the scene in a similar manner to Mind of Evil episode 1 and it was included as an optional extra on the DVD and for the first time could be viewed in it's intended place in the story. 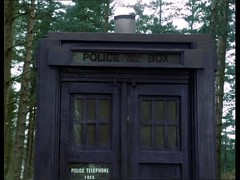 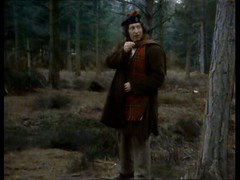 On debut here is writer Robert Banks-Stewart, who'd been writing for television since 1959 with Danger Man, The Avengers and Jason King on his CV. He'd go on to create detective dramas Shoestring and Bergerac. Banks-Stewart is the first debut author on Doctor Who since Robert Sloman and Barry Letts wrote the Daemons in 1971. Four seasons of Doctor Who have elapsed since then with the just older authors contributing to the show. It's no surprise that Robert Banks-Stewart should show up: he was an old friend of Script Editor Robert Holmes as you can read in Robert Holmes: a Life in Words. Banks-Stewart is due to have his memoirs published shortly by those nice people at Miwk Publishing.

Also returning are Nicholas Courtney, as Brigadier Lethbridge Stewart, and John Levene, as Mister Benton, as part of UNIT's traditional start of the season appearance. The last time we saw them was in Robot when The Doctor left with UNIT's Medical Officer Harry Sullivan.

Angus, the pub landlord, is played by Angus Lennie who was Storr in The Ice Warriors and found fame as Shughie McFee in Crossroads. He's got a role in the The Great Escape as Flight Officer Archibald Ives 'The Mole'. Doctor Who companion William Russell, who played Ian Chesterton, also features in the same film! 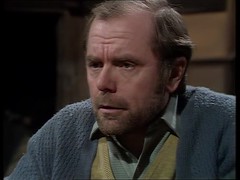 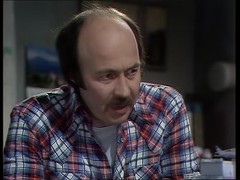 The man from the oil company, Huckle, is played by Tony Sibbald. He's got no other Doctor Who connections but had appeared in The Plastic Eaters, the first episode of science fiction drama Doomwatch by Doctor Who alumni Kit Pedler & Gerry Davis. The same episode also features Camfield regulars Kevin Stoney and Richardson Morgan as Professor Hal Symonds and the Engineer - First Airline Crew respectively. Camfield would later reuse Tony Sibbald as Dr. Symonds when he directed Robert Holmes adaptation of The Nightmare Man

Appearing in this episode only are Hugh Martin, as Munro, who'll be back as a Priest in Vengeance on Varos. Camfield had used him earlier that year in one of his episodes of Public Eye: The Fall Guy as The Barman. This isn't the last time that Public Eye will feature in the cast lists for this story! 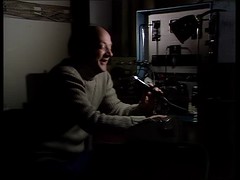 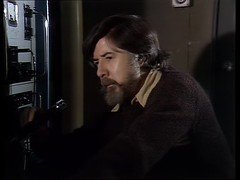 Bruce Wightman , the Radio Operator on the Ben Nevis oil rig, was used by Camfield for a couple of Hartnell stories as William de Tornebu in The Crusade and Scott, the Australian Cricket Commentator, in The Daleks' Master Plan.

Credited as a soldier in this episode is James Muir - which one I can't tell. He's a somewhat regular extra for the series having appeared as, all uncredited, a Soldier in The Time Monster episode one, a UNIT Soldier in Invasion of the Dinosaurs part one and a Muto in Genesis of the Daleks parts two & three. He'll be back as a Brother in The Masque of Mandragora part three, a Worker in The Sun Makers part one and a Technician in The Sun Makers part two, a Technician in The Pirate Planet parts one & two, a Druid in The Stones of Blood part one, a Louvre Detective in City of Death part one, a Mandrel in Nightmare of Eden part one, a Foamasi in The Leisure Hive part one, a Gaztak in Meglos part one, a Tharil in Warriors' Gate part one and the Police Driver in Black Orchid part two. He's got Blake's 7 on his CV appearing as a Federation Trooper in Seek-Locate-Destroy, a Phibian (for which he gets a credit!) in Orac, a Rebel in Pressure Point, a Monster in Dawn of the Gods, a Link in Rescue, a Helot in Traitor, a Pirate Guard in Assassin and a Federation Trooper in Blake. He'd been in Moonbase 3 as a Technician in Castor and Pollux and he's also the Vl'Hurg Leader in Episode 4 of the TV version of The Hitchhiker's Guide to the Galaxy!

This episode aired the last Saturday in August 1975. The previous Monday, a bank holiday, Tom Baker presented the BBC's Disney Time as The Doctor which included the Doctor being given a message by the Brigadier summoning his assistance.... which he'd already done in the previous story Revenge of the Cybermen.