419 The Brain of Morbius: Part Two

"Confess that you were sent here to steal the Elixir of Life, and your death will be made easy!"

Solon returns to the laboratory so Sarah hides. Solon & Condo & hunting the Doctor and conclude Maran, the head of the sisterhood has taken him. The Doctor wakes in the sisterhood's sanctuary and they accuse him of being sent to steel the elixir. They tell him of Morbius' crimes on Karn and his execution but the Doctor insists he felt the presence of his mind. Sarah follows Solon & Condo as they go to the sanctuary, interrupting the Doctor's being sacrificed to the flame to bargain for his life and Solon offers his servant's life for the Doctor's. While Solon debates with Maran a disguised Sarah loosens the Doctor's bonds allowing him to escape when the fire is lit. Maran fires an energy blast at them from her ring which blinds Sarah. Condo argues with Solon, upset that his master would offer him for sacrifice. Solon promises to reattach his arm. The Doctor brings Sarah to Solon to get him to look at her eyes. In the depths of the castle Solon confers with an unseen colleague that he addresses as Morbius but is summoned away by Condo when the Doctor & Sarah return. Solon examines Sarah but while he is doing so the Doctor catches sight of the Monster. Condo escorts Sarah from the lab as Solon tells the Doctor Sarah's sight is nearly completely destroyed and only the elixir of life can save it. The Doctor leaves to obtain some. Stumbling around the castle Sarah hears a voice calling for Solon and descends the stairs to the basement. Condo is sent with a message to the sisterhood and urged to get there before the Doctor. Sarah comes into the basement lab where Morbius' brain is housed in a jar. 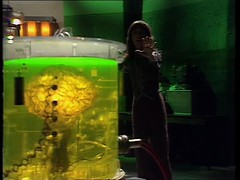 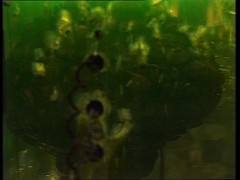 Just tops. Fabulous. A little bit "to and fro between the castle and the sanctuary" in places but each move is justified by the plot. The end reveal of the titular Brain of Morbius, after seeing the body and hearing the voice earlier is great! Lovely piece of special effects/prop work as it sits there bubbling in a jar.

The sisterhood seem very keen to kill The Doctor:

DOCTOR: Have I been ill long, nurse?
MAREN: I am leader of the Sisters.
DOCTOR: Hmm? Sorry, matron.
MAREN: Maren.
DOCTOR: No, thank you. I had a little drink about an hour ago. Events have moved along while I was asleep.
MAREN: You feign ignorance, Time Lord?
DOCTOR: Please, just call me Doctor. I hate all this bowing and scraping.
MAREN: Do you wish to confess?
DOCTOR: Confess? To what?
MAREN: That you were sent here by the High Council of the Time Lords.
DOCTOR: Well, I have to confess
MAREN: Good.
DOCTOR: That I don't really know. The calibrators have been on the blink recently. How did you get her here, by the way?
OHICA: The power of the Sisterhood.
DOCTOR: Really? What, you mean you still practise teleportation? How quaint. Now, if you got yourself a decent forklift truck
MAREN: Doctor, you have but a little time left. Will you waste it prattling nonsense or confess your guilt.
DOCTOR: What do you mean, I have but a little time left?
MAREN: Before you die.
DOCTOR: But I'm only seven hundred and forty nine. Life doesn't begin until seven hundred and
MAREN: At the next sun. That is agreed.
DOCTOR: Not by me, it isn't. I haven't even been consulted.
MAREN: Confess that you were sent here to steal the Elixir of Life, and your death will be made easy. 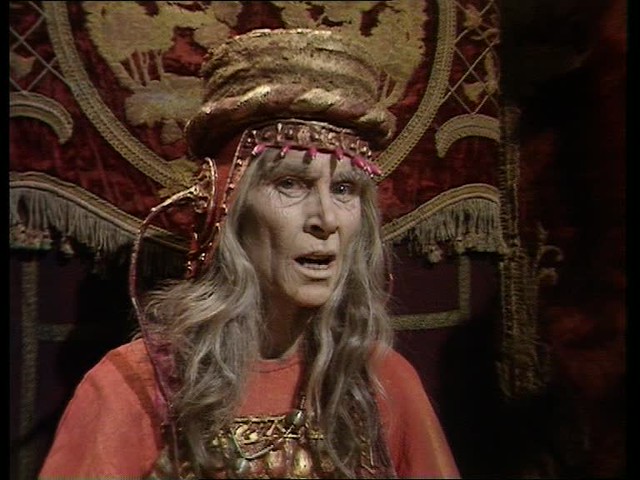 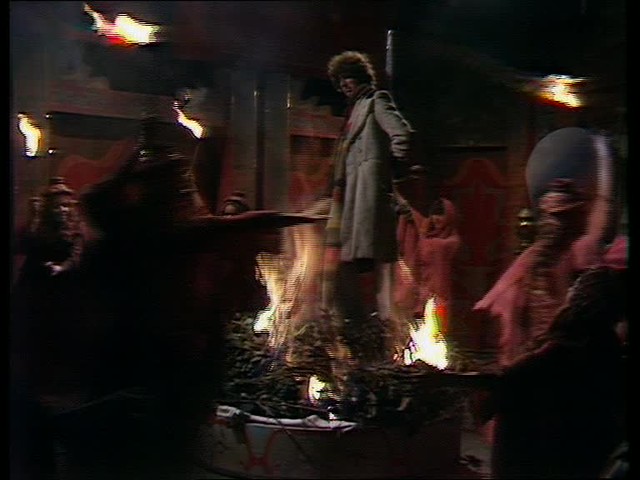 Second time in two stories that the Doctor's been tied up round a pole: Stygrron tied him to the memorial in Adroid Invasion part 3.

Yet we know there's been a close association between the Sisterhood and the Time Lords in the past. They've shared the elixir with them:

MAREN: As you know, Ohica, the secret of the Life Elixir is known only to our sisterhood and the High Council of the Time Lords. Since the time of the stones we have shared the Elixir with them. Now there is none to share.

Maren was even present at the execution of their enemy Morbius, who as yet we know little about.

DOCTOR: I haven't the vaguest notion of what you're talking about. The last thing I remember, I was taking a glass of wine with Solon and Morbius.
MAREN: Morbius is dead.
DOCTOR: That's right. Morbius is dead.
DOCTOR: How did I get that impression?
MAREN: The Time Lords destroyed Morbius for his crimes here on Karn.
DOCTOR: Solon had a clay model of his head. But it was more than that. A living mental contact. I felt the mind of Morbius.
OHICA: Morbius was executed for leading the rebellion. His body was placed in a dispersal chamber and atomised to the nine corners of the universe.
DOCTOR: I know that. But I tell you, Maren. Just for a second, before I passed out, his mind touched mine. I felt his burning hatred and anguish. Morbius is alive.
MAREN: I suppose you think raising these old fears can somehow help you, but I was present at his execution. Morbius is dead, Doctor, and you will join him very shortly.

Indeed the Time Lords' and the Sisterhood's home planets, Gallifrey and Karn, would appear to be close together:

DOCTOR: I thought I recognised the stars.
SARAH: You've been here before?
DOCTOR: I was born in these parts.
SARAH: Near here?
DOCTOR: Well, within a couple of billion miles, yes.

Maren knows enough about Time Lord Technology to recognise The Tardis, even in it's disguised form as an Earth Police Box:

MAREN: I was right, Ohica. It is a time machine.
OHICA: Of the kind
MAREN: A Tardis. Only the Time Lords know the secret of such machines.
OHICA: Then the one I saw is a Time Lord.
MAREN: Sent here to steal the Elixir.
OHICA: Maren, what can we do? Alone among all the races in our galaxy, the Time Lords are our equals in mind power.
MAREN: That is true, Ohica. Other races we can destroy from within. We can place death in the centre of their beings, send them mad with false visions. But with this one such powers would have no effect. He would close his mind to us.
OHICA: Then we are lost!

It's quite interesting that Maren uses here ring to blind Sarah. Once upon a time the Doctor owned a ring which seemed to have extraordinary powers: 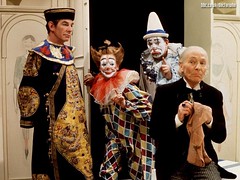 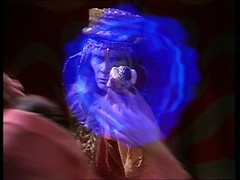 Both The Meddling Monk and The Master have also been seen to be wearing rings as a symbol of power in the past, so it's quite possible that as well as the Elixir being shared with the Timelords they have shared some of their technology with the sisterhood.

Yes the sisterhood have problems with their flame

OHICA: The Flame of Life! Maren, what is wrong? Why is it so low?
MAREN: The Flame dies, Ohica. Every month, every day, it sinks lower.

But why be so quick to turn on their once allies?

MAREN: As you know, Ohica, the secret of the Life Elixir is known only to our sisterhood and the High Council of the Time Lords. Since the time of the stones we have shared the Elixir with them. Now there is none to share.
MAREN: The few phials that are left I have kept for ourselves. But for months I have felt the Time Lords would come to rob us of these last precious drops.
OHICA: You think the two I saw have been sent to steal the Elixir?
MAREN: If that is so, we must deal with them.

I think the answer is found elsewhere in the episode

MAREN: What is the favour, Solon?
SOLON: In all the years I've been here on Karn, I've never asked or sought anything of the Sisterhood before. I've helped you, I've treated many of the Sisterhood.
MAREN: All this is true.

Solon's had contact with the Sisterhood. He must know of the problems they've got with the flame: Why else would he be treating one of their members if the Elixir has healing properties, as he tells the Doctor?

DOCTOR: Can't you operate?
SOLON: The retina's almost completely destroyed. There's nothing I can do for her.
DOCTOR: Nothing?
SOLON: Well, there's a faint chance.
DOCTOR: A chance?
SOLON: No, it's impossible.
DOCTOR: What chance?
SOLON: The Elixir of Life. As you know, it regenerates tissues. But the Sisterhood control its only source. You're not going to get any from there.

I suspect that Solon has been speaking to Maren and the sisterhood and dripping sweet but poisonous words into their ears about their allies.

That doesn't mean to say he hasn't got plans for the Sisterhood too:

SOLON: Then he must still be unconscious. He can't have moved. That squalid brood of harpies, the Sisterhood. That accursed hag Maren found I was holding a Time Lord and rescued him. May her stinking bones rot! I'll see her die, Condo. I'll see that palsied harridan scream for death before Morbius and I are finished with her.

Frankenstein isn't the only story "borrowed" from for this serial: The name Morbius is a steal from the film Forbidden Planet, previously homaged in Planet of Evil. The planet name Karn is taken from author Terrance Dicks' own Doctor Who stage play The Seven Keys to Doomsday. The brain in a jar we see at the end is a horror staple, but a living brain? well there's two anitcendants that I can think of: Doctor Who's own The Keys of Marinus which has the Brains of Morphotron in the second episode but more importantly the Roald Dahl short story William & Mary where a man's brain is preserved living after his death. I saw it dramatised in Tales of the Unexpected (The episode guide says it first aired 1979 so I'm guessing that it's a repeat I caught in the mid eighties) and it lodged in my mind so much that when Liz turned a radio adaptation on in the car the other month I recognised it immediately! It's available on DVD in Tales Of The Unexpected - The Complete First Series and Tales Of The Unexpected - The Complete Series
Posted by Philip Ayres at 07:00