418 The Brain of Morbius: Part One

"Let me take your hat, sir. There. Oh, what a magnificent head!"

A ship has crashed on a barren planet and it's insectoid occupant drags it's body across the rocks only to be brutally murdered by a man with a hook for a hand who takes it's head. Condo, the servant, takes the head to his master Solon who tells him it won't do and he needs someone warm blooded with a central nervous system. The Tardis materialises on the planet with the Doctor emerging and shouting at the Time Lords who he believes have dragged them off course to do some dirty work for them. Sarah finds the crashed ship and when a bolt of lightening illuminates the landscape she sees many more. The Doctor obstinately refuses to investigate and sits playing with his yo-yo until he hears Sarah scream when she finds the headless corpse. The Doctor recognises the star patterns as being close to where he was born. Seeing a castle on the horizon they make for it. Solon is experimenting on the insect head when the lightening takes his power out. Elsewhere a group of women have noticed the Doctor & Sarah's arrival and believe they have come to take the elixir of life, a substance they guard which is no longer being produced from the flame of life which is dying. They have shared the elixir with the Time Lords and believe that the Time Lords have come to steal that little which remains. Solon finds Condo who has been looking for his missing arm which Solon has promised to repair. A bell sounds announcing visitors as the Doctor & Sarah arrive. Solon immediately is drawn to the Doctor's head. He tells them that they are on Karn, a name the Doctor recognises. One of the head statues in the room catches the Doctor's attention which he thinks he recognises. They are bought wine by Condo, who Solon explains he rescued from a crashed Drahvidan starship. The sisterhood form a chanting circle, locate the Tardis and transport it to their sanctuary. They recognise it as a Tardis, the vessel of the Time Lords. They form a circle again and attempt to locate the Doctor. The Doctor remembers that Solon is neuro scientist who disappeared, rumoured to have joined the cult of Morbius. A wind sweeps through the castle throwing the doors open and revealing the statue. The Doctor wonders if the Sisterhood of Karn are responsible and recognises the bust as being that of Morbius, a despicable Time Lord criminal before both he & Sarah collapse drugged by the wine. Solon plans his operation using the Doctor's head and orders Sarah's death but Condo hesitates. Before he can complete the task he's ordered to take the Doctor to the laboratory. Solon discovers from the Doctor's secondary cardiovascular system that he is a Time Lord. Sarah explores the castle but as Solon & Condo repair the generators the Doctor is teleported away by the sisterhood. Sarah finds the lab but while searching for the Doctor discovers a hideous headless creature made from an assortment of body parts...... 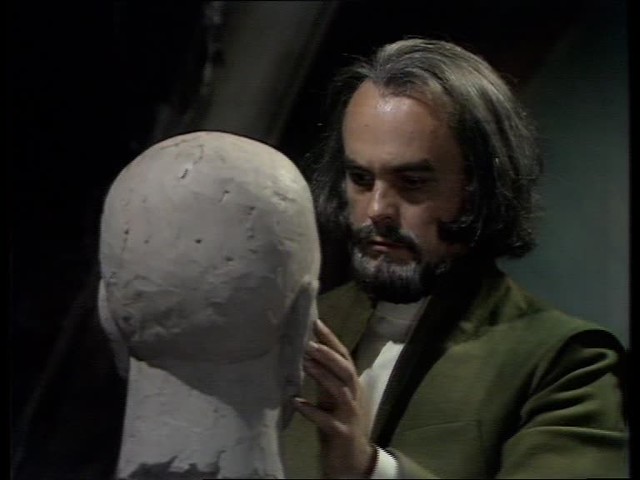 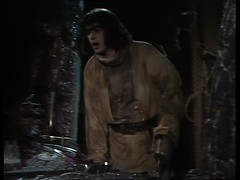 Huzzah! It's Doctor Who does Frankenstein with all the trimmings: a mad scientist, a deformed servant, a body built up of parts, a castle, and even lightening everywhere. Very atmospheric and top stuff. 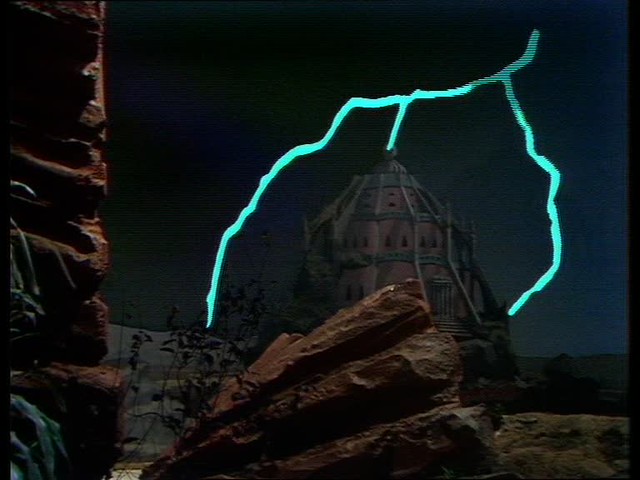 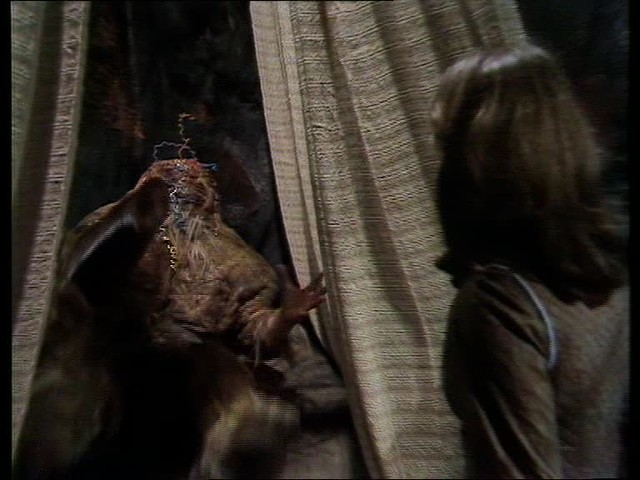 OHICA: The Flame of Life! Maren, what is wrong? Why is it so low?
MAREN: The Flame dies, Ohica. Every month, every day, it sinks lower.
OHICA: How can this be? At our ceremonies the Flame has burned brightly, higher than my shoulder.
MAREN: A deception. For many months past, before each ceremony, I have secretly fed the Flame with powdered Rine Weed.
OHICA: But if the Flame dies, there will be no more Elixir.
MAREN: It has been low now for over a year. The vessel remains empty.
OHICA: Then we are doomed. Our sisterhood will perish.
MAREN: We are only servants of the Flame. If the Flame dies, then so must we.
OHICA: Maren, should not the others know?
MAREN: Not until the end is certain. As you know, Ohica, the secret of the Life Elixir is known only to our sisterhood and the High Council of the Time Lords. Since the time of the stones we have shared the Elixir with them. Now there is none to share.
MAREN: The few phials that are left I have kept for ourselves. But for months I have felt the Time Lords would come to rob us of these last precious drops.
OHICA: You think the two I saw have been sent to steal the Elixir?
MAREN: If that is so, we must deal with them. Summon our sisters. We will form a circle. 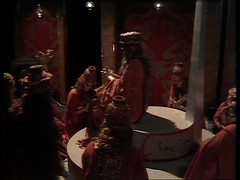 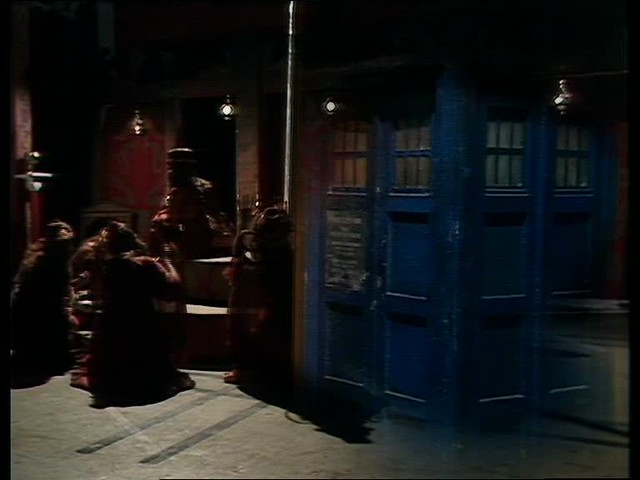 The element that doesn't seem related to the Frankenstein story is the all female cult with their sacred flame and teleporting powers. How strong they are is highlighted by them moving first the Tardis then the Doctor. 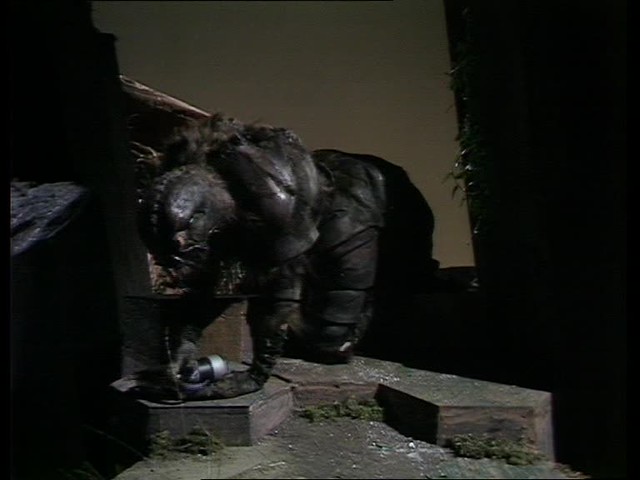 Yes that's a Mutant costume in the opening moments of the show, as later confirmed by the Doctor. Our old friend John Scott Martin is inside it (apparently the character is named Kriz).

We also get references to the Drahvidans, as seen in the story Galaxy Four, and an unknown alien race called the Hoothi:

Even the silent gas dirigibles of the Hoothi are felt in our bones while still a million miles distant.

Many years later Paul Cornell would use them as the villains in his Doctor Who New Adventures novel Love & War.

There's also a hint that the Doctor's people, the Time Lords, may have something to do with him being where he is....

DOCTOR: Come out, meddlesome, interfering idiots. I know you're up there so come on out and show yourselves!
(Sarah sneaks out cautiously with a torch.)
DOCTOR: Messing about with my Tardis. Dragging us a thousand parsecs off course.
SARAH: Oi, have you gone potty? Who are you shouting at?
DOCTOR: The Time Lords, who else? Now, you see? You see? They haven't even got the common decency to come out and show their ears.
SARAH: They're probably afraid of getting them boxed, the way you're carrying on.
DOCTOR: It's intolerable. I won't stand for any more of it.
SARAH: Oh look, why can't it have just gone wrong again?
DOCTOR: What?
SARAH: The Tardis.
DOCTOR: What? Do you think I don't know the difference between an internal fault and an external influence? Oh, no, no, no. There's something going on here, some dirty work they won't touch with their lily white hands. Well, I won't do it, do you hear!
(Thunder rolls in reply.)
SARAH: There's something ominous. Where are we, do you think?
DOCTOR: I don't know and I don't really care.
SARAH: Oh, come on. Come on, stop being so childish.
DOCTOR: I'm just going to sit here and do nothing.
SARAH: So there.
DOCTOR: Yes.

The Doctor has been used as the Timelords' agent/puppet several times before: some might say his whole exile to Earth was so they could have an agent in the right place at the right time. Even discounting that he's done their bidding in Colony in Space, Curse of Peladon, The Mutants, the Three Doctors and Genesis of the Daleks. By now he's getting fed up of being used and manipulated by them.

The Time Lords aren't the only people interested in using the Doctor, Solon is positively obsessed by the Doctor's head!

DOCTOR: Can you spare a glass of water?
SARAH: Can we come in?
SOLON: Humans. At last. Humans! My dear sir. My dear, dear sir. You have no idea what a pleasure this is. It's so long since we've. Condo, take their clothes.
SARAH: Well, if we could just shelter for a while, that would be fine.
SOLON: Great heavens, you can't go walking on a night like this. I wouldn't dream of letting you proceed one step further. Condo, stir yourself. Our guests are cold and tired and wet and. Let me take your hat, sir. There. Oh. What a magnificent head.
SARAH: What?
SOLON: Superb head.
DOCTOR: Well, I'm glad you like it. I have had several. I used to have an old grey model before this. Some people liked it.
SARAH: I did.


The Doctor has heard of their host before however

SOLON: One never really overcomes the nostalgia for one's planet of origin. Sometimes at night I look up at the sky and I think, will I ever see Earth again?
SARAH: I know the feeling.
DOCTOR: What made you settle on Karn?
SOLON: Well, nobody lives here. Nobody bothers me. I can get on with my work.
SARAH: What kind of work is that?
DOCTOR: Microsurgical techniques into tissue transplant. It was the title of the book you published.
SOLON: You know something of my history, Doctor.
DOCTOR: One of the foremost neurosurgeons of your time. Considerably after your time, Sarah. Yes, your disappearance caused quite a stir. It was said by some you'd joined the followers of the cult of Morbius.
SOLON: Malice. Academic jealousy. I just had to get away. 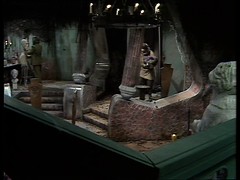 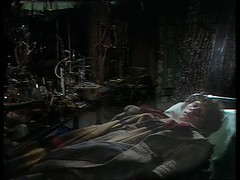 The whole thing is tied together by some superb design work from Barry Newbery, one of the series regular designers in the early days, who'd worked on An Unearthly Child (with Peter Brachacki), Marco Polo, The Aztecs, The Crusade, The Time Meddler, The Daleks' Master Plan (with Raymond Cusick), The Ark, The Gunfighters, The Dominators and Doctor Who and the Silurians. This is his first story for six years but he'll return for The Masque of Mandragora & The Invisible Enemy before moving on to other things. He returns again for one last quick job before retirement with the Fifth Doctor two part story The Awakening. 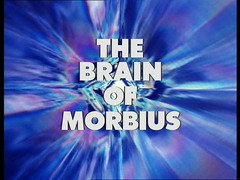 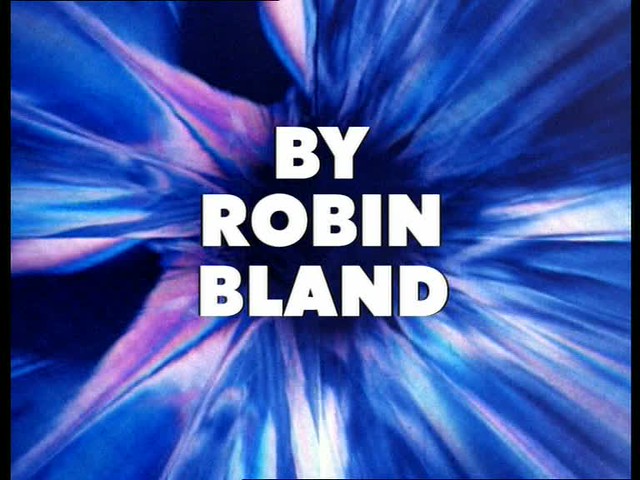 So "Robin Bland". Terrance Dicks wrote the first draft of this story with Morbius having crashed on the planet and a robot trying to rebuild him using the parts he found there. He then went away on holiday as which point Philip Hinchcliffe became worried about realising the robot for the screen so had script editor Robert Holmes rewrite the story. Terrance Dicks read the revised scripts on his return from holiday and disagreed with the changes arguing that while you could understand a robot coming up with this patchwork body surely the galaxy's greatest neurosurgeon could do better. He's got a point: why doesn't Solon immediately want to transfer Morbius' head into the Doctor's body? Or, for that matter, Condo's? So Dicks ordered Holmes to take his name off the script and replace it with "some bland pseudonym". Holmes took him at his word and came up with the writer's name that this story went out under. Terrance is reported to have laughed when he saw the eventual credit!